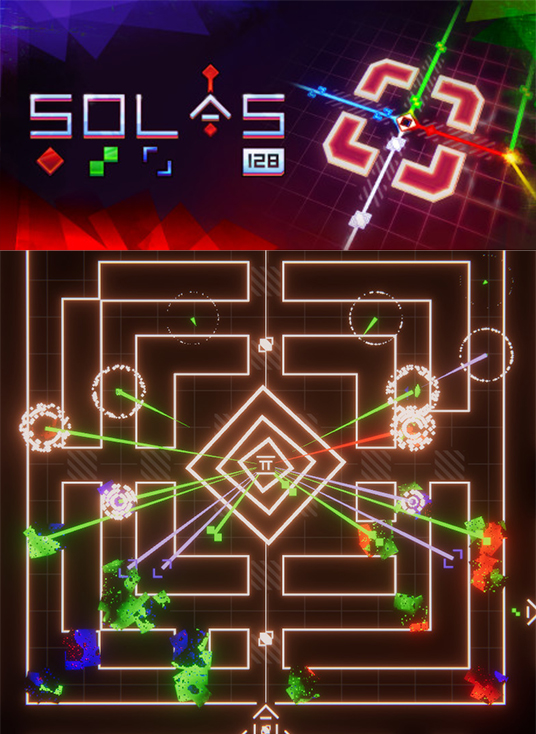 It doesn’t really matter how things break.  Whether it’s mistreatment, shoddy workmanship or just general decay, everything runs down eventually.  The trick is to know what’s worth repairing and what isn’t.  Whatever the machine in Solas 128 is, it’s dead and broken, but not beyond repair.  The complex circuits making up its inside still pulse to rhythms of its music, and while the corruption is bad in places, it’s not so terrible that there can’t be workarounds.  Paths are blocked, whole subroutines stranded and everywhere in the system shows signs of decay, but it’s still salvageable.

Solas 128 is a puzzle game about shooting beams of light through the complicated interior of broken machine, bouncing from one reflector to the next in an attempt to re-energize the multiple hearts of a mysterious device.  Each room has a number of elements in it, with the most basic being the entrance where the beam comes from and the exit to direct it to, plus reflectors that bounce the light where it needs to go.  An icon travels down the beam in tune to the music, one every four spaces, activating whatever it hits.  This, of course, is where things start getting properly tricky.

Each area in Solas 128 is a single-screen room, with a number of reflectors to play with in order to get the beams where they need to go.  Purple reflectors can be moved to any clear clear spot in a room, although the lined squares are off limits, orange reflectors can flip ninety degrees to change the angle of the bounce, and finally the ones with orange and purple can do both.  These are the primary tools of the game and usually there are enough to get the job done.  Not always, though, because there’s a single square’s-worth of overlap between one room and the next and it can be used to store an extra reflector.  Using it to transport a reflector from one area to the other only works, of course, if you’ve unlocked the door to the next room. 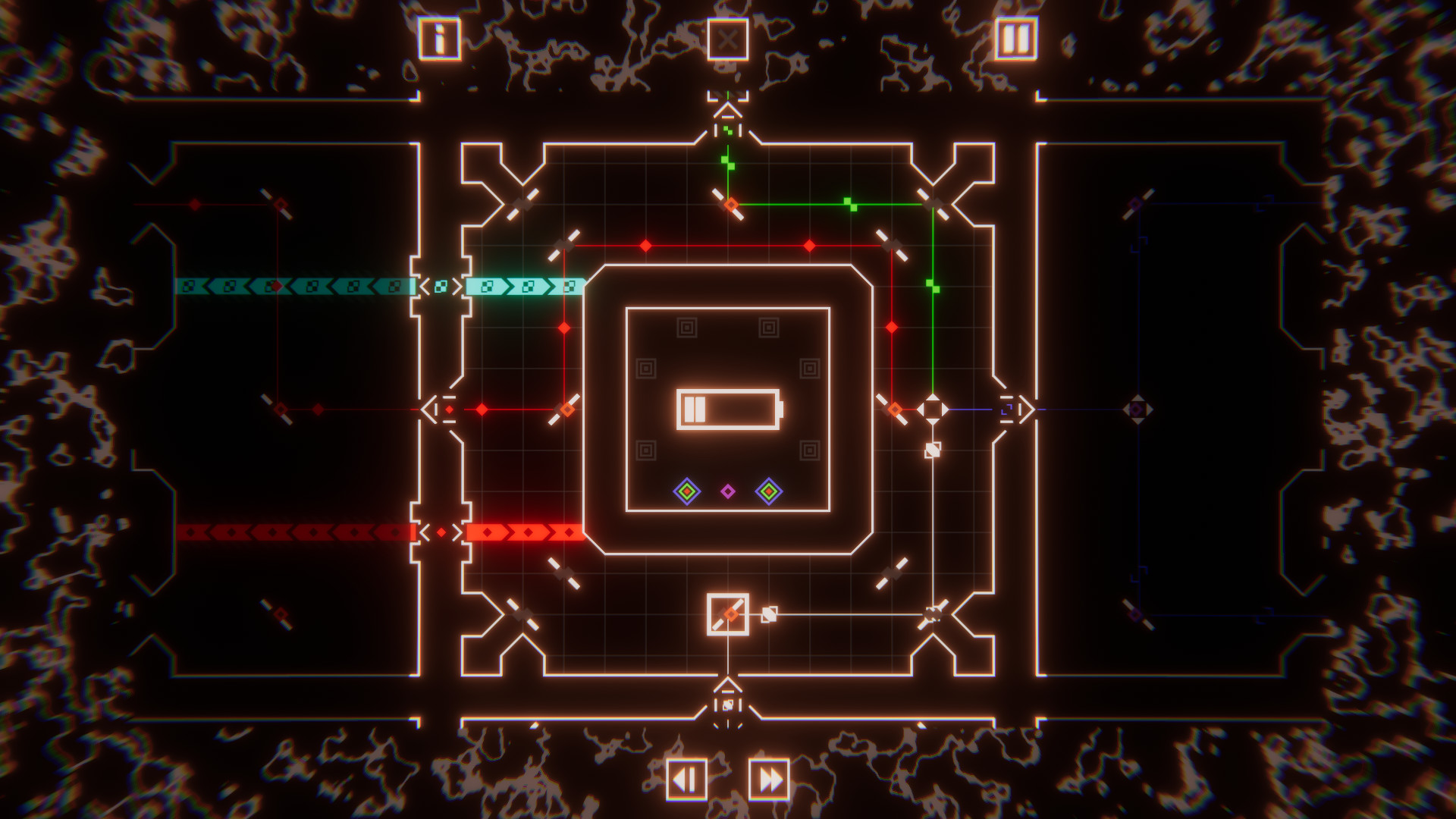 How on earth does that work?  Well, the map is designed so that you’re frequently backtracking, rewiring a room to take advantage of new light pulses that criss-cross the map.  One of the earlier examples has a series of rooms cleanly divided between top and bottom, with the beam on the bottom traveling to the right until hitting a dead end.  Getting to the end, however, means you can free another blocked beam to travel back to the left, scavenging the reflectors that had been so useful going one way to activate the path back across the top.  Returning to the area where this sequence started is a door that the first beam simply couldn’t access, plus the original one is needed in a third exit anyway.

And then Solas 128 starts layering on the mechanics.  Two beams intersecting at a ninety-degree angle merge and shoot off diagonally if their pulse-icons intersect or simply cross if they don’t.  Fatter beams act as filters, changing the line from white to any number of colors and doors suddenly start being picky about which color is required to activate them.  Icons on the floor are activated with a pulse to turn blockers on and off, which comes in handy when the filter-beams are in the way.  Of course, the filters are beams just like the regular ones so they can be bounced around by reflectors too, but unlike the regular beam the filters block each other when they intersect.  Put all that together in a multi-room puzzle and it can take a good amount of experimentation to move forward, but it all makes sense eventually.

If that doesn’t happen, though, and the logic refuses to reveal itself, there’s a hint system that actually feels reasonable to use.  Each room has two hints available, showing where reflectors go without actually saying why they’d need to be there or which direction they should face.  It’s just enough to give a pointer in the right direction without spelling out the solution, especially when there are so many possible variables.   With over 150 rooms and the steady escalation of mechanics, maybe it’s OK to use a hint now and then. 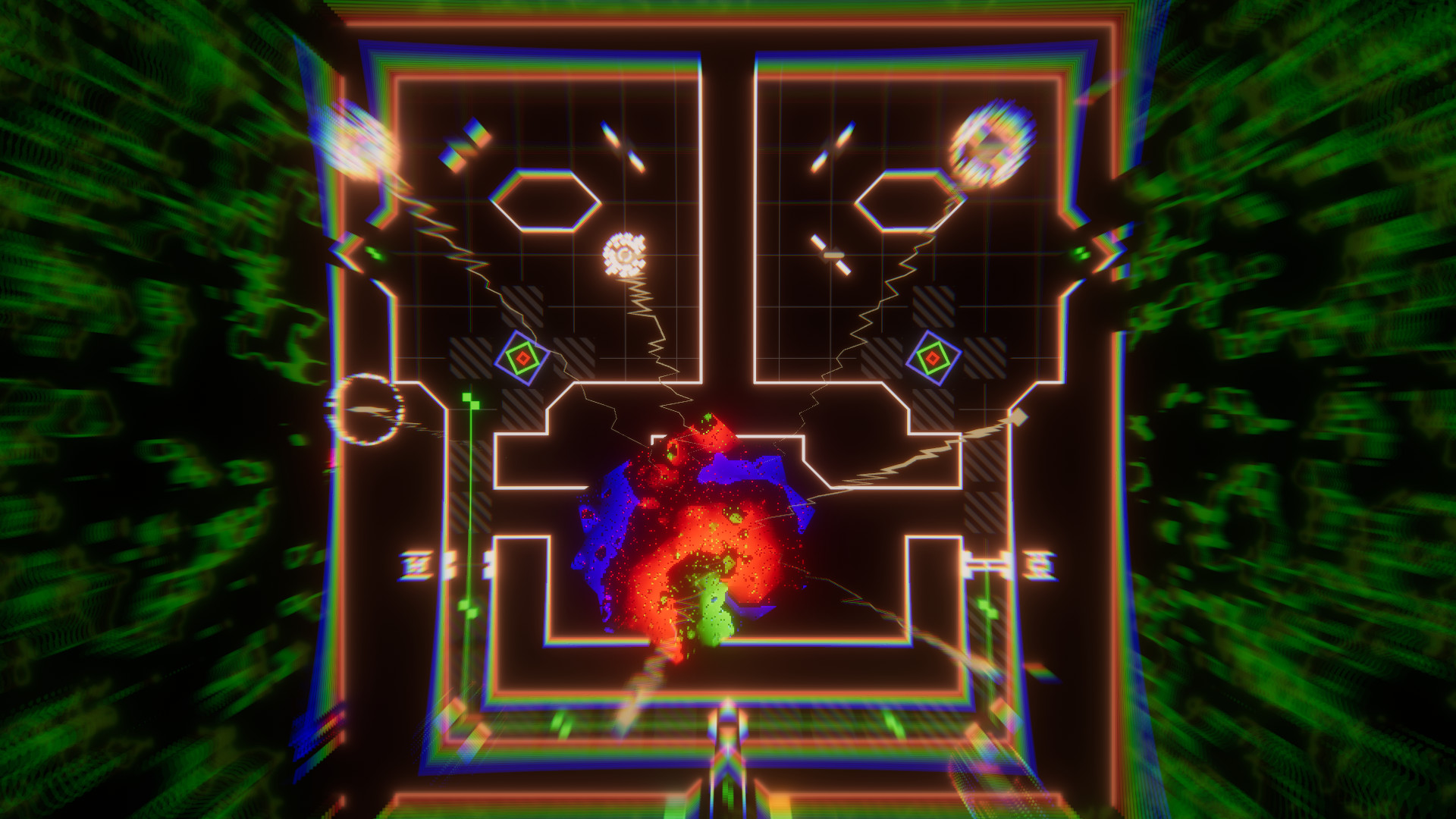 Solas 128 is an intricate sprawling mass of puzzles, slowly building in intricacy from managing a single beam to untangling multiple colors and filters with only a handful of reflectors.  The initial “guide the beam to the exit” eventually changes to “guide the color to the place to activate the trigger to get to the area while keeping an eye on three possible exits, all of which will be used eventually but in what order?”  Meanwhile the neon-vector art style keeps the screen looking great even as the minutes tick by, and while the repetition of the soundtrack doesn’t fare so well in the long run, the steady beat of the synthwave music keeps the brain flowing along in a puzzley trance.  There’s a lot to untangle in the depths of a corrupted machine, but when fixed maybe it can finally function again good as new.