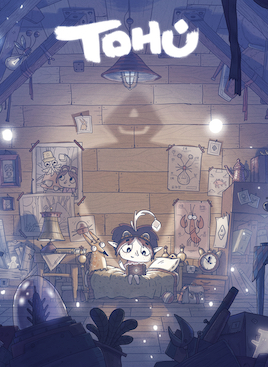 “Fish planets.” You needn’t look further than the game’s brief synopsis to get an idea on the kind of world Fireart Games are going for with TOHU. That the developer are using the broad, creative liberties — which this particular brand of weird, odd-ball adventure, so often grants — to paint imaginative interpretations of a point-and-click, puzzle-oriented affair. Pleasant enough these scenes may well be to look at and at least appealing to the kind of user that puts such things like proportions at the bottom of one’s priorities. As much as it’s peculiar too in picking out the variety with which once-inanimate objects take on life as meandering insects of sorts — regular creatures too adorned with similarly-exaggerated details of a sort. TOHU‘s aesthetic is one of being intentionally over-the-top and child-like in its interpretation of the world the game encompasses. Shapes and features often too big or small, inaccuracies often the standard as opposed to the exception. The very namesake of a “world” little more than short-term snapshots near-bursting with more detail than necessary.

While it gives Fireart’s visual department all the room imaginable to go wild, it also means TOHU‘s progression — its locale-hopping sequence of one floating planetary body to the next — feels less like a story and more a trotting between some double-page spread of a children’s book. Not that there’s anything wrong with that premise, but to come to TOHU expecting the “adventure” part of its genre’s namesake to be exactly that — some grandiose tale — would be to set one’s self up for disappointment. TOHU is neither lengthy nor expansive with its material; around five to six hours should be the expected play-time, even for those whose preferred brand of adventure release isn’t one limited to a nearby mouse and on-screen cursor.

But where the story may take a back-seat. More so, any semblance of a theme TOHU wants to provide (and there’s a strange attempt right at the end to hurriedly present things as some greater message) is perhaps the one area the game doesn’t gel on. Fireart’s combining of their surreal aesthetic and its collection of puzzles to crack are the real focus here and it’s that priority that thankfully allows TOHU to shine. For all its excess — at times a worry that the need to illustrate its world in such a way, will overshadow everything else going on — the one area TOHU keeps its focus on are the puzzles themselves and the balance the game just about nails between the traditional drag-and-drop template of many a point-and-click, as well as the more on-the-spot, mind-numbing assembly of components for players to grasp. 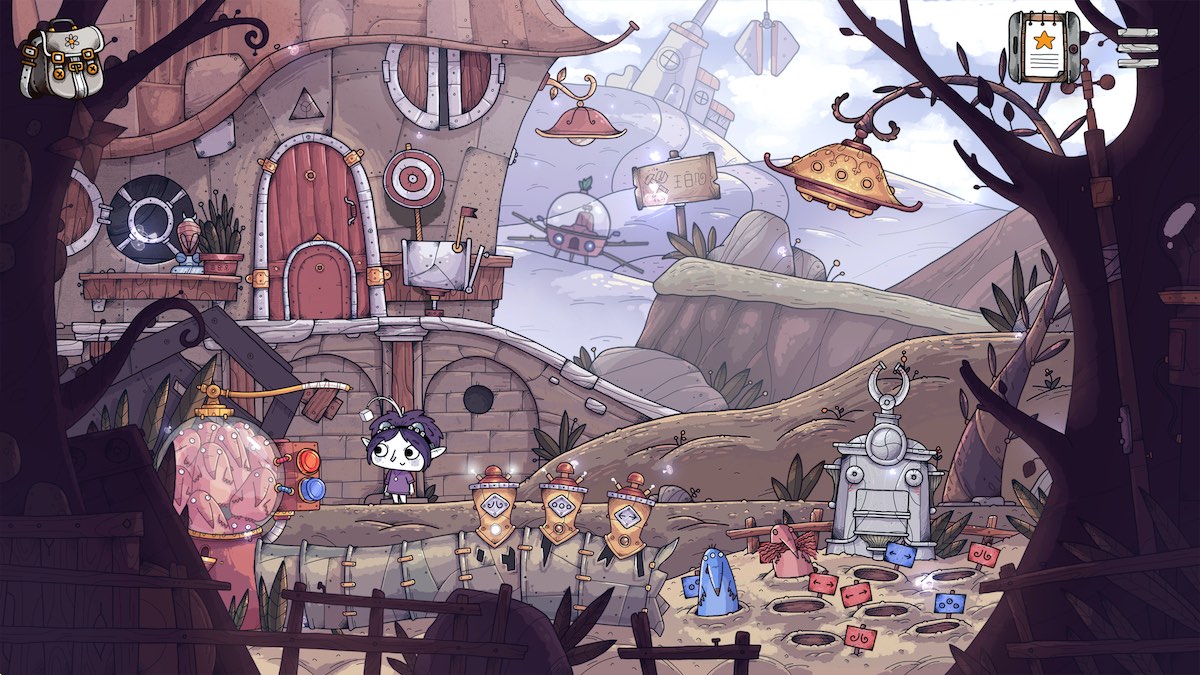 For anyone who has ever played a point-and-click game, the controls are a standard affair. Click on a given area to have your character move to that specific spot. At times, an object or piece of the environment can be interacted with, even acquired as a valuable item. Sometimes that required action is unavailable — your character offering a quick shake of the head or suggestion they lack the required strength. This is where the main character’s “alter ego” Cubus comes into play. A simple click of the mouse allows you to switch between the two forms — Cubus manifesting as this bulkier, thus stronger, mechanical version of your character. Often the go-to when it comes to transferring larger items and on occasion solving some of the more character-specific puzzles requiring you to do more investigative work as to the correct sequence.

It wouldn’t be a stretch to say that a lot of TOHU‘s early drag-and-drop conundrums are not the most complex of segments. A more cynical person could rightly proclaim that this isn’t something some old-fashioned brute force can’t work out — simply trying out each object until the figurative peg squeezes through the right hole. And that does certainly limit the appeal of how early segments play out. Especially given that each planetary setting of sorts is usually limited to around three or four screens-worth of interaction. Not all solutions present in TOHU, however, are as obvious or as clear-cut as they initially appear. Though reading the environment will provide subtle hints on what’s required, certain puzzles in the latter half do require players to look closer at the items in their possession. Even if a bit of assumption and guess-work becomes the order of play, the benefit here is that little of TOHU‘s set-up feels spelt out or painstakingly obvious to read. 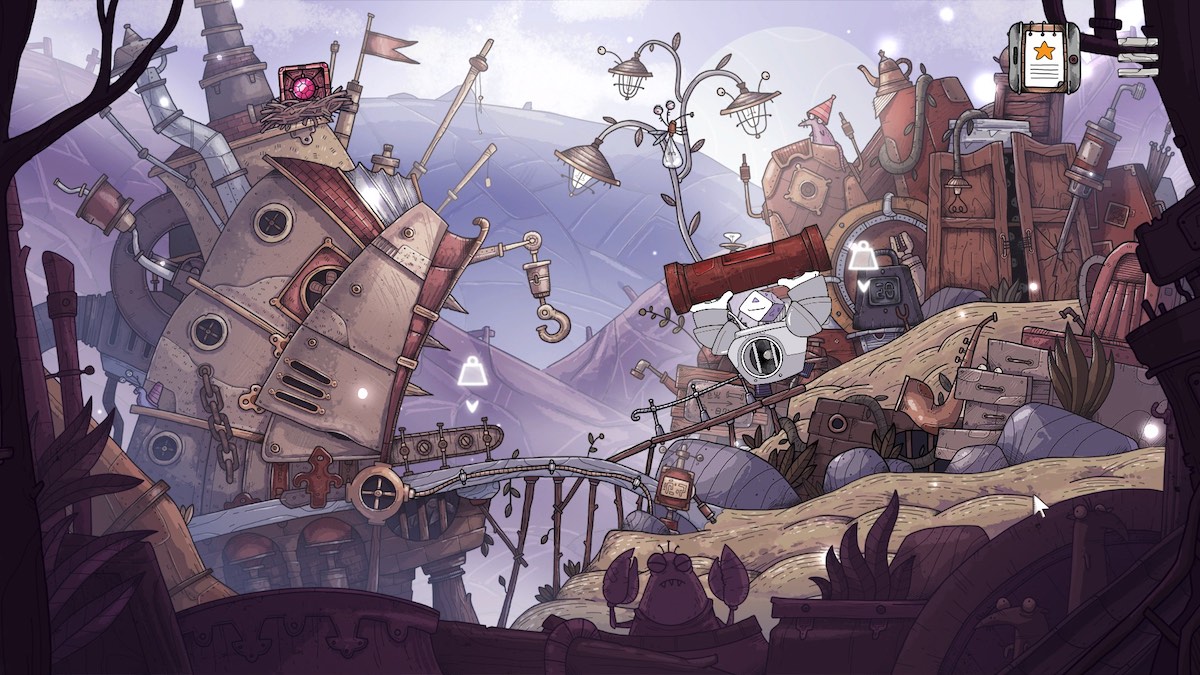 That goes double with the kind of puzzles TOHU sprinkles about so as to balance one’s play-time. Between those that are about reading the environment and those that are more traditional in the case of either moving elements about, reacting in as quick a time as possible, or sometimes both. Everything from the classic formulating a closed circuit on a board, to cutting wires in a limited time — of which reset and randomly generate anew upon time running out — and even one that has players working out the correct sequence, to then revert back to said sequence’s beginning so as to close the broken loop. Though these ideas may not be original, in some cases borrowing from some of puzzle gaming’s oldest of conundrums, the way TOHU paces these keeps the overall flow of the game from feeling anything but stagnant.

TOHU‘s overall structure, though, surprisingly isn’t as equally divided as you might expect but this in no way hampers the experience. In one case, one of the settings is no longer than a mere fifteen minutes of successfully beating a trio of reactionary puzzles. Where with other locales, the primary gimmick may in fact extend its duration without feeling like unnecessary bloat. It’s not the most dynamic of shifts and a lot of that change is of course down the visuals. Expected it might be though — how each region leans more into a certain color palette or environmental trope — the confidence and trust the game quickly builds with its puzzles makes each one of these brief excursions a pleasant-enough step forward. In some cases, the very manner at which visuals are imposed on the player can even be novel, a further leaning into the game’s clear love for the odd and the whacky. 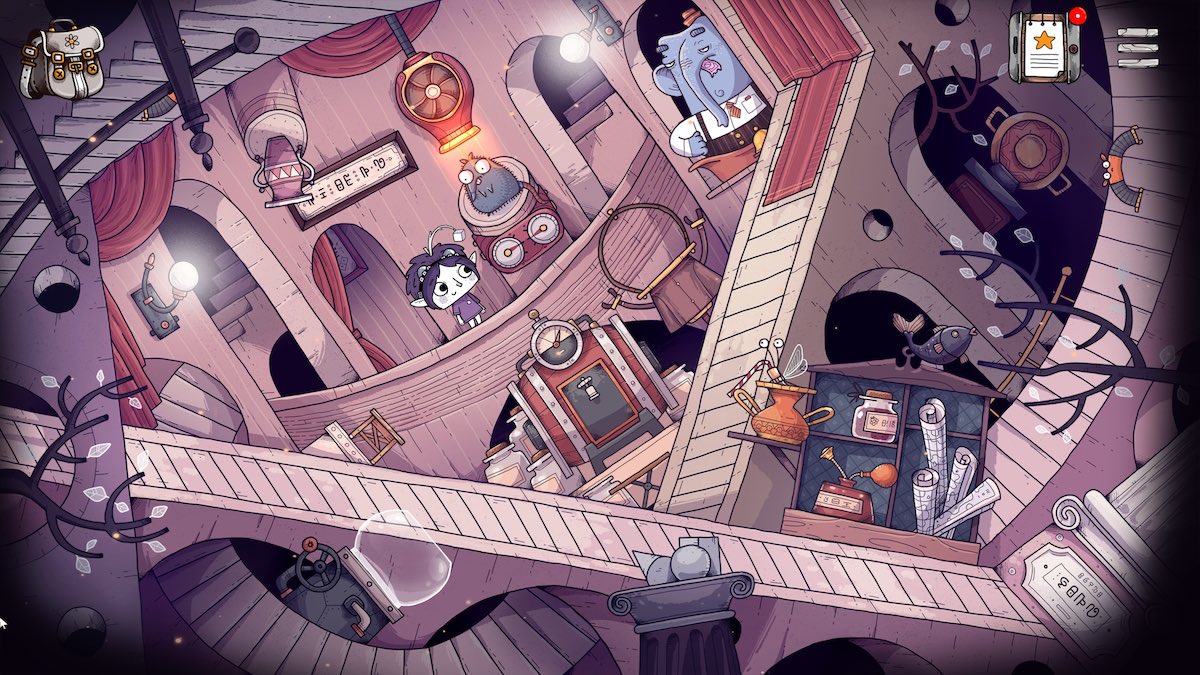 But perhaps the most noteworthy spot of praise to give TOHU and Fireart particularly is the hint system. The manner at which players are given clues as to how to solve an otherwise tricky puzzle. This may seem odd to talk positively on a system that, by design, subtracts from the satisfaction of puzzle-solving. Yet the great thing about TOHU‘s implementation here is that to even gain access to said hint requires the player to prove they’re capable enough in their abilities, rather than it simply being a limitless supply of free passes. Requiring players to react in time to a series of buttons on a dial of sorts. Even then, because the resulting hint is but a series of images — a sort of hand-drawn make-shift comic of sorts — the answer thankfully is less a blatant giving-away the solution, more a deciphered hint as to what’s involved if not how it’s involved. Where other games may have objects illuminate or simply guide players to the required objective, TOHU‘s approach manages to find a fitting middle-ground where assumption and deduction on the player’s part still plays a pivotal role. That limitation on an answer can of course be seen as a hindrance as much a benefit, but the point is that even at its most charitable, TOHU rarely feels like it gives players an easy way out.

The potential difficulties that surface outside the puzzle-solving, however, can work against the game on a couple of occasions. Especially during said moments where time is a factor — getting to a certain spot before an NPC spots you — and nailing the exact number of pixels that are interactive, can result in one too many annoying fail-states. A less-forgiving hindrance than perhaps some of the character animations present in TOHU — a select number that come across as wanting to take their sweet time and just about staying on the player’s good side as a result. And as noted, for all the variety and weird imagination that the visuals provide, that same caliber of variety sadly isn’t matched by the story. A tale which tries to lead up to some key reveal yet doesn’t feel like it invests anywhere near the time or space to make such moments feel in anyway impactful. One of the game’s final scenes, meant to evoke some emotional sacrifice, falling completely flat due to how little was developed or even touched upon prior. Had the game leaned more on its narrative — or even indulged more so on the nature of its visuals — the problem might have been more damaging. As it turns out, the puzzles and stage-like orchestration of scenery make up most of the focus and it’s that priority care with the gameplay that pays off. 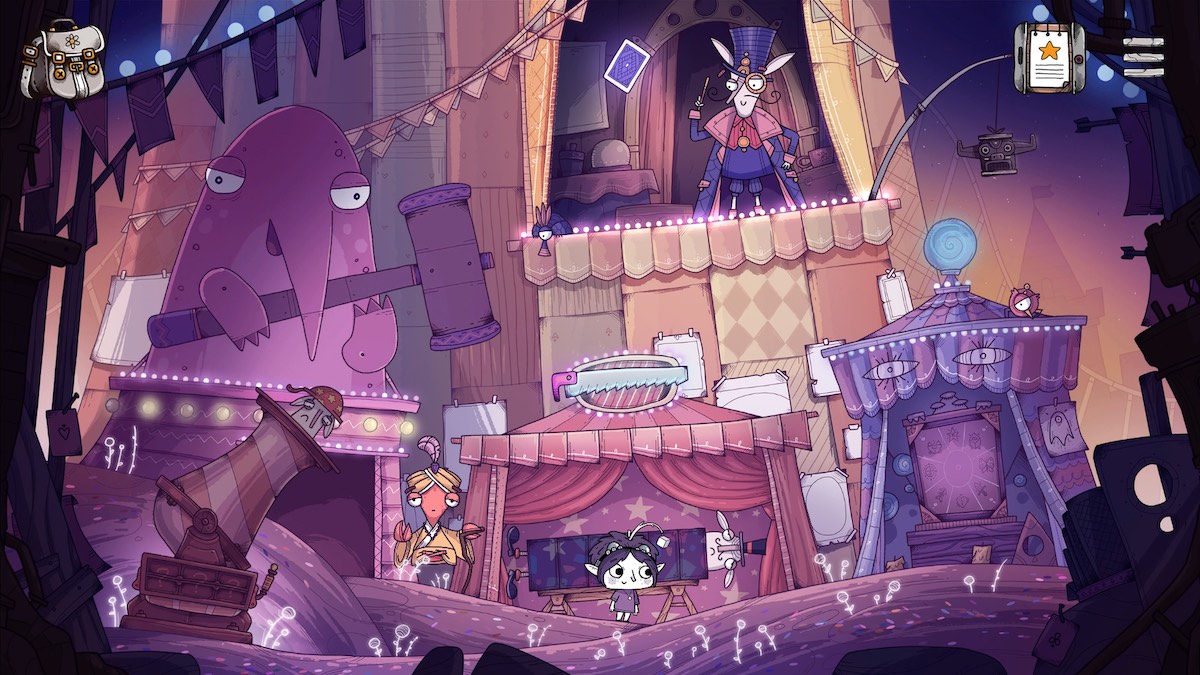 Despite its narrative leading to little in the way of a noteworthy tale, TOHU manages to gracefully side-step such an omission through wise understanding of its scale. Utilizing such a wild, excessive aesthetic in a way that feels earned, as opposed to unjustly forced. But in focusing specifically on the bevvy of point-and-click conundrums — as much making sure to sprinkle in more deductive puzzles along the way — TOHU isn’t just a pleasant trip through a child-like exaggeration of visuals and scenery, but crucially, does so in a way that doesn’t treat its players similarly as such young-aged audience members. Both with the way conundrums are presented, but also through its hint system that manages to give enough of an assistance, yet still trust its players to deduce the correct method forward. It may fall victim to the trappings of point-and-click’s very structure once or twice along the way, but TOHU still manages to provide a short and sweet little adventure through a surreal, at times delightful, set of circumstances.