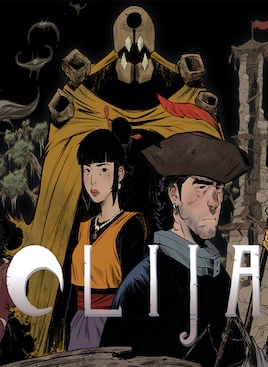 Usually when you hear of someone’s criticism about game length, more often than not it’s that said game felt too bloated. That it should’ve been shorter, cut loose of some of its otherwise-presumed padding or parts that held little, if any, value. You seldom hear such criticism work the other way though, or at least that which is presented as negative. Any talk on a game’s “shorter” length proving to be emblematic of its successes, rather than its shortcomings. The game was so good I wish there was more of it…or words to that effect. I can’t say that that sentiment is entirely absent with a game like Olija given its four-to-five hour run-time. A run-time which isn’t that surprising or unexpected for anyone who’s ever looked at a world map. Not least for a game like this that revolves around gathering keys, hopping between islands and approaching the great, omnipresent door at the map’s top. But I bring up the comment on run-time and the need to see more of Olija, not because I understood exactly what it was going for and felt compelled by it, but the opposite.

I had little idea of what the game was aiming to be. Worse, when I was meant to react or feel any sense of stakes being imposed/met in its story. To the point, the credits begin to roll and the only reaction is a simple: “…oh.” Perhaps this is a fault of the visuals, an intentionally-pixellated affair where characters are blocky piles of squares and featureless expressions — their only means to emote and offer a semblance of narrative relevancy, the odd altering of a pixel color to denote, for example, a head tilt. That’s not to say that games that weigh heavily on the pixels can’t provoke or inspire, but you can’t help but wonder when playing Olija if too much has been lost. And if the game is aiming to provide some sort of thematic tale, just how effective can it be.

Admittedly, important as it is not to lump the tag of “story-heavy” on Olija here, given how much is pitted on its world’s backstory, its characters and its set-ups — even in the context of a five-hour run-time — little else is offered on the game’s part to make the journey feel any more than imitation. Implied ruined kingdoms and corrupted figures and ravished this and strangely-verbose NPCs that talk in far too cryptic words, you can’t help but feel the tone is being lavished too thick in parts. Which is a shame, because if you can afford to put the muddled world-building and vague story to the side — and concentrate solely on the gameplay — Olija is a competent-enough, possibly-entertaining action-platformer. A platformer whose harpoon-hurling/harpoon-warping combat is the much-needed injection of adrenaline that the game needs. And receives, justly, in sufficient doses. It’s satisfying to walk into a scenario full of enemies — those with melee weapons, with bows and those larger types you know can deal hefty damage if you’re not careful — and proceed to wildly dart about a given space. Taking them out as best you can. While there’s a degree of chaos and mindless scampering that can take place here, Olija still finds time to prove, rightly so, that a more tactical use of your harpoon — both launching it and using it to warp to for follow-up strikes — can go even further. 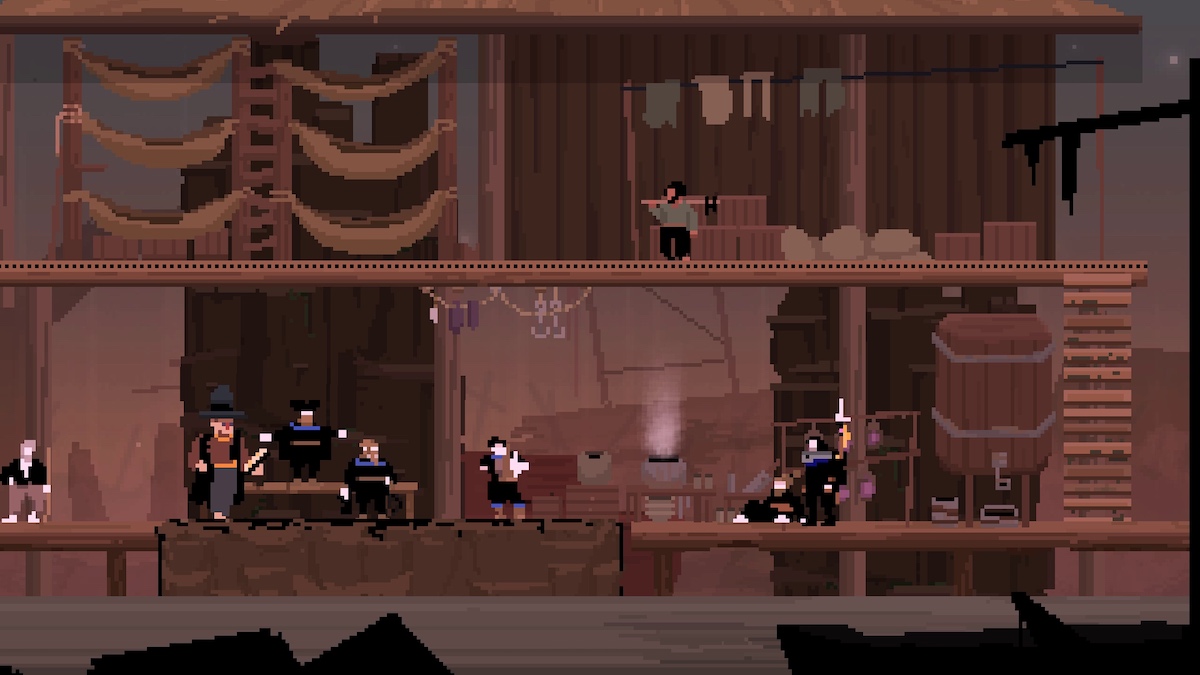 There are later encounters that require players to think more methodically about when and where to strike. Boss battles that encourage you to take down the healer-class foes first; another shorter set-piece that has you fleeing for escape as an overwhelming number of grunts chuck projectiles your way. These moments wouldn’t work as well, or simply be as satisfying to work with, if Olija‘s combat had that instantaneous snap to it. The satisfaction of aiming-and-firing, warping from A to B, to then fee just as quickly out of danger to repeat the process over. There aren’t as many big moments like these, or ones that set the stakes against you so as to have you truly master the gameplay. But when they do arrive, it’s where Olija excels on most of all. Further to that, when Olija dedicates itself to its gameplay mechanics and its level design particularly, there’s fun and some modicum of challenge to get past.

But even here there’s a sense that the game isn’t ready to put its narrative to one side and focus squarely on making its world both inventive and intriguing to explore. Too linear to be considered a Metroidvania, yet too simplified overall to be hailed on its platforming prowess. Just when you think the game is onto something, that it’s about to provide a lengthier spot of level design or puzzle-solving, the feat is achieved and you’re flung back into the world to hunt down the next set of McGuffin keys. The fact the game even locks you out of some of these segments. Yes it helps to denote that anything important or story-reliant has already been claimed here, but to permanently lock players out of that area entirely? Perhaps if the world of Olija was more elaborate — more than just a direct path treated to with some optional collectibles to the side — this understandable design choice may not feel as jarring as it does. 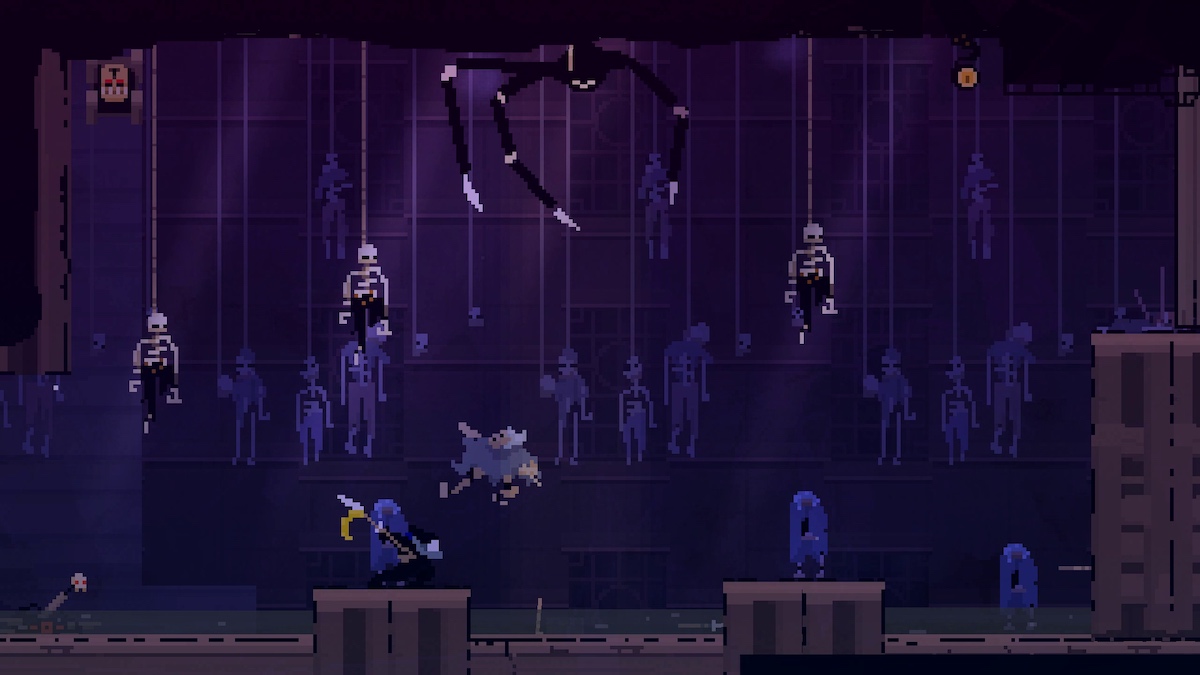 Even these sections can fall by the wayside. And not because players can find themselves willingly falling head-first into a pit or a bed of spikes at the exact point of transitioning from one screen to the next. Given how erratic combat encounters can be, it’s somewhat of an annoyance when you find enemies firing at you or even striking your position from off-screen. Even worse is figuring out just what sections of a level constitute an implication that there’s parts of a level below, versus that which isn’t. At times it can be hard to tell which is which and it sadly speaks as well to some of the more basic errors when it comes to level design. Enjoyable the accompanying multi-screen puzzle segments can be, mere moments before/after. To further that, there are some moments of linearity and hopping between screens which the game does get right. Brief a stealth section there is, it’s a neat alternative and break away from the usual pace preceding it. What’s more, an “encounter” of sorts thereafter with a recurring character, if a little undefined, is not without some level of intrigue as to where it’s all leading. The pay-off may indeed follow along that same line of being neither uplifting nor disappointing, but at least here, Olija still manages to make the road getting there an intriguing one to see unravel.

Olija is an odd game and not the brand of odd that immerses you through its world-building, or catches you off-guard through eccentric writing. There are attempts to draw you in, even if that effort is to be exactly like all those games you’ve seen before, but little else. The kind of “stranger in a foreign land” type scenario that wants to be mystical yet hostile. Hopeful but equally parts downtrodden with its set-up and subsequent backstory as to what has happened to this land you’re now hopping to and fro between. And it all seems to blend together into this inoffensively, middle-of-the-road excursion that neither justifies the time-sink, nor entirely wastes it either. Neither content, nor frustrating. The final boss encounter, if you will, is predictably-orchestrated yet underwhelming nonetheless in its rather “oh, that’s it?” level of response. Had there not been such a presence with its story, its attempt to make the narrative’s circumstances feel more impactful, perhaps the feeling wouldn’t be as deflating as it is. 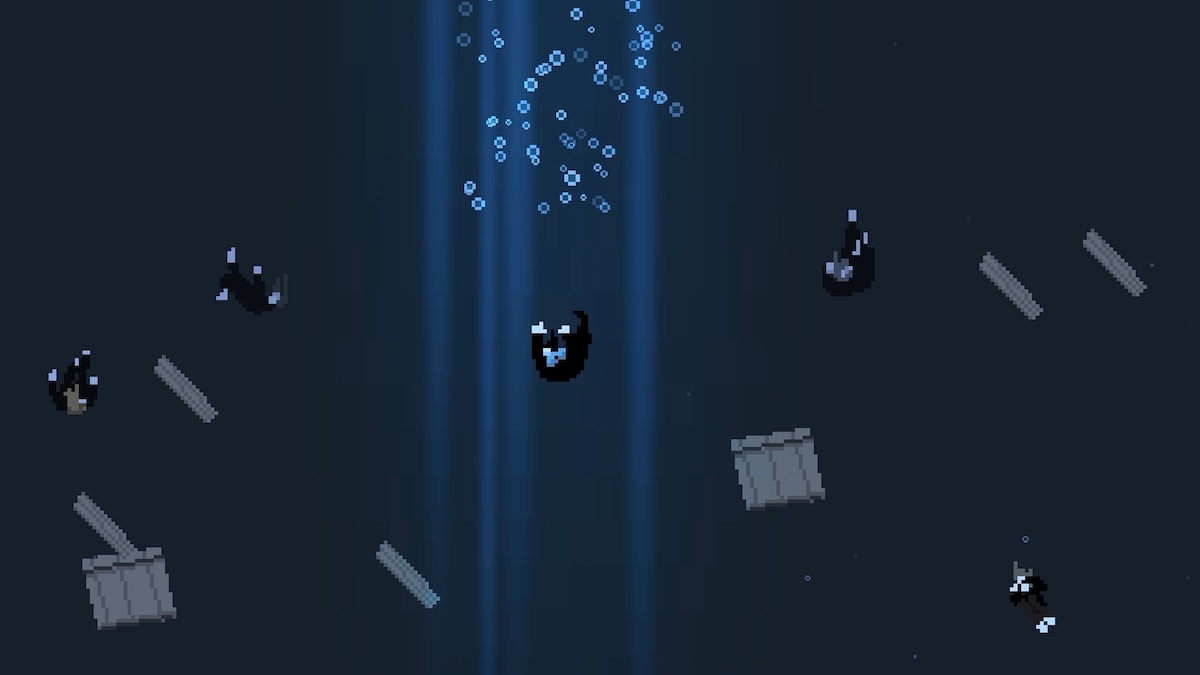 Olija doesn’t do enough to be regarded as generally good, but at the same time doesn’t frustrate to the point of truly damaging the experience. Had Olija been without its frantic, harpoon-wielding combat, the story might’ve been different. Then again, the similar emphasis on a story and a world that feels neither purposeful nor refined, could’ve had the result land in more promising waters too. Perhaps this middling indecisiveness is the real conclusion to draw from a game like Olija. A short, platforming-of-sorts release that doesn’t commit to any one definable trait and ends up a scatterbrain of ideas that don’t gel or add up to anything remarkable. At the same time, providing little to evoke any manner of meaningful investment. That’s not to say there isn’t enjoyment and moments of delight to find here, but there’s something equally dispensable about Olija‘s design and equally “seen before” with its tone, that doesn’t hit home as effectively as it may want to.