There’s a problem with scale and proportion, in that the bigger something is, the harder it is to visualize accurately.  It’s easy to say the Hoover Dam is 724 feet tall, and try to visualize it as two football fields high, but it takes a bit of work to appreciate its mass.  The Moon is 240,000 miles away, a sphere 1/4 the size of Earth that you can cover up completely with a single finger held up to the sky, and yet when drawing the orbit it almost always ends up significantly closer than it actually is.  A Dyson Sphere is a shell with a roughly 93,000,000 mile radius, designed to fully harness 100% all power from a star, and at this point accurate visualization breaks down almost completely.  That’s huge beyond all measure, and the single greatest engineering feat we can imagine for a sentient species.  This, obviously, makes it the perfect end-goal of a factory game.

Factory games have landed hard in the last several years since Factorio blew the doors off the genre.  There’s something deeply satisfying (possibly even Satisfactory) about starting with nothing but a small handful of tools and building up from there.  Being alone in the unspoiled wilderness sounds lovely and all, but it’s somewhat short on amenities, so with a little video game super-science, an ore deposit turns into iron bars, stone into bricks, copper into wires, and from there it’s a short step to automated miners, assemblers and thousands upon thousands of conveyor belts.  Hook it all up together and the basic needs start taking care of themselves while newer, more complicated technologies open up.  Circuits lead to sorters, sorters allow greater efficiencies in conveyor belt usage, efficiency provides greater output, and soon enough it’s time to fire up the nuclear power plant.  Take that, wilderness! 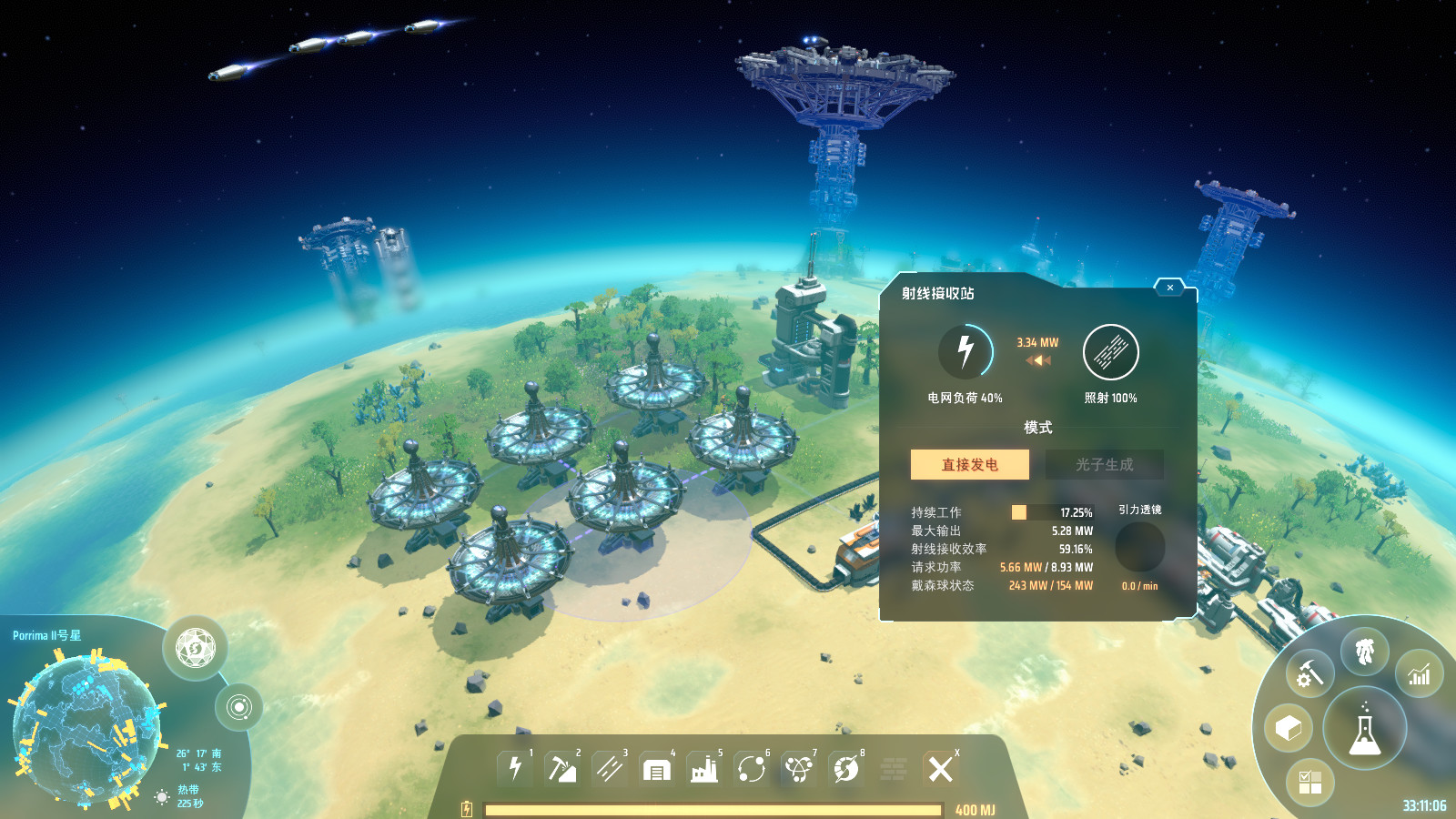 Dyson Sphere Program takes the scale of the factory game to its logical conclusion, with the end result being to build a shell around a star.  This is going to take more than a single planet’s resources, of course, and here’s where Dyson Sphere Program‘s first major wrinkle in the factory genre comes into play.  Instead of constructing on a nice, endless plane, the planet is an actual sphere in a small but functional solar system, orbiting its sun.  While the universe is randomized, each game always starts you off on a warm, hospitable planet with all the basic resources readily available, but that’s no promise they’ll be close together.  Even though the planet looks like a cute little thing on the initial flyby, I timed off a walk around the equator and it takes nearly three minutes to circumvent the globe.  That’s plenty of room for stone, coal, iron, copper and oil to be plentiful yet distant from each other, but conveyor belts are cheap to manufacture and the planet is happy to move without a hitch in framerate even when loaded down with buildings.  Apply even the most basic of logistics and you’ll have an industrious little corner of the globe in short order, plus the first entries on the tech tree.

For a space-capable race, the builder-robot the player controls is worryingly untrained in the tech that got it to the starter planet in the first place.  It’s got a few basics down, but anything beyond simple metallurgy and construction is going to require research, starting with electromagnetism and working up through circuitry, chemical refining, various types of power generation and eventually massive interconnected product hubs served by an army of drones.  There’s also a second tech tree for robo-upgrades, including better power management so you’re not constantly tossing coal into its fuel tank, faster walking speed, more construction drones so long strings of conveyor belts don’t take forever to place, plus the ability to not only fly over the planet’s surface but get back into space.  It didn’t seem like too hard a landing on the pleasantly Earth-like opening planet, but it seems like builder-bot lost some functionality on arrival. 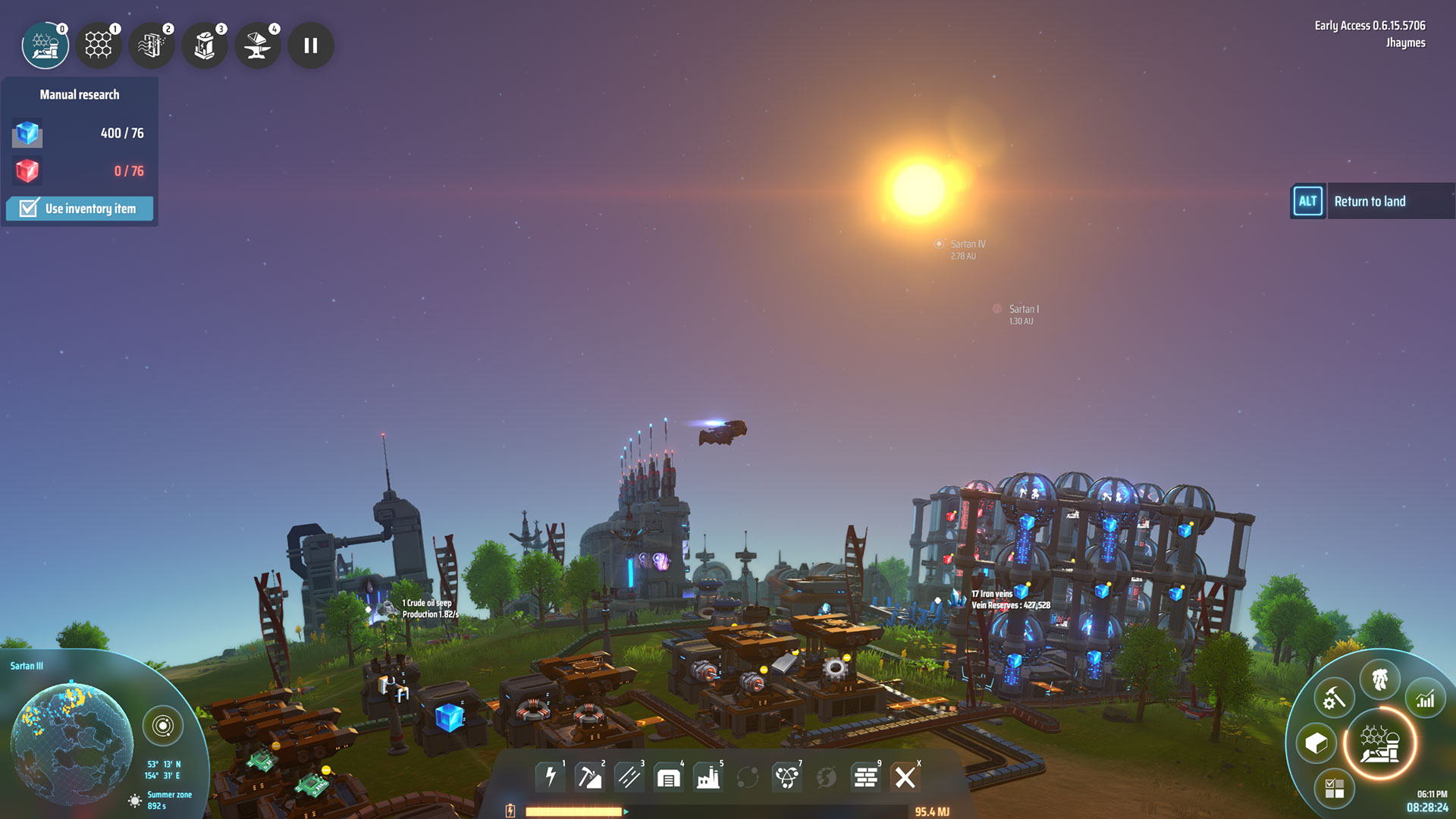 The opening planet can only provide so much, though.  While the universe is random the opening star system is similar for everyone, with guaranteed resources on the starter planet and its solar system, but it’s going to take a lot more than the one place to create such a huge final construct.  Not just in terms of quantity of material but also type, because there are resources in other star systems that simply aren’t available at the home base.  Eventual technological advancements let you create interstellar resource nodes, warping what are basically space-trucker drones from one star to the next, and a little light planning ties everything together into a massive production chain that, finally, starts the creation of the single largest engineering program any sentient species could reasonably aspire to.

Dyson Sphere Program is a hugely-ambitious game and the most impressive thing about it is how even in its Early Access state it feels like it’s going to hit all its goals.  It looks fantastic from the start and only gets better as the planet grows more covered in machinery and a tangle of connecting conveyor belts.  While the UI can take a bit of getting used to that’s a side-effect of the genre being complicated, rather than a knock on Dyson Sphere Program specifically.  Once you know where to look there are little hints and shortcuts noted everywhere, such as tapping the right arrow key to copy the output of a building so it can be pasted into a row of them rather than having to manually select it one unit at a time.  The upgrades come at a good pace, and frequently just in time to turn what had been becoming troublesome into another kind of manufacturing opportunity.  The planetary logistics hub shows up just at the point where the planet is about to be paved in conveyors, for example, letting drones fly resources from one hub to another and eliminating a huge source of clutter.  Not only that the tech tree is clear about not only what each new research unlocks, but the tech necessary to build it.  There’s no point in opening up a fancy new building before being able to manufacture its components, after all. 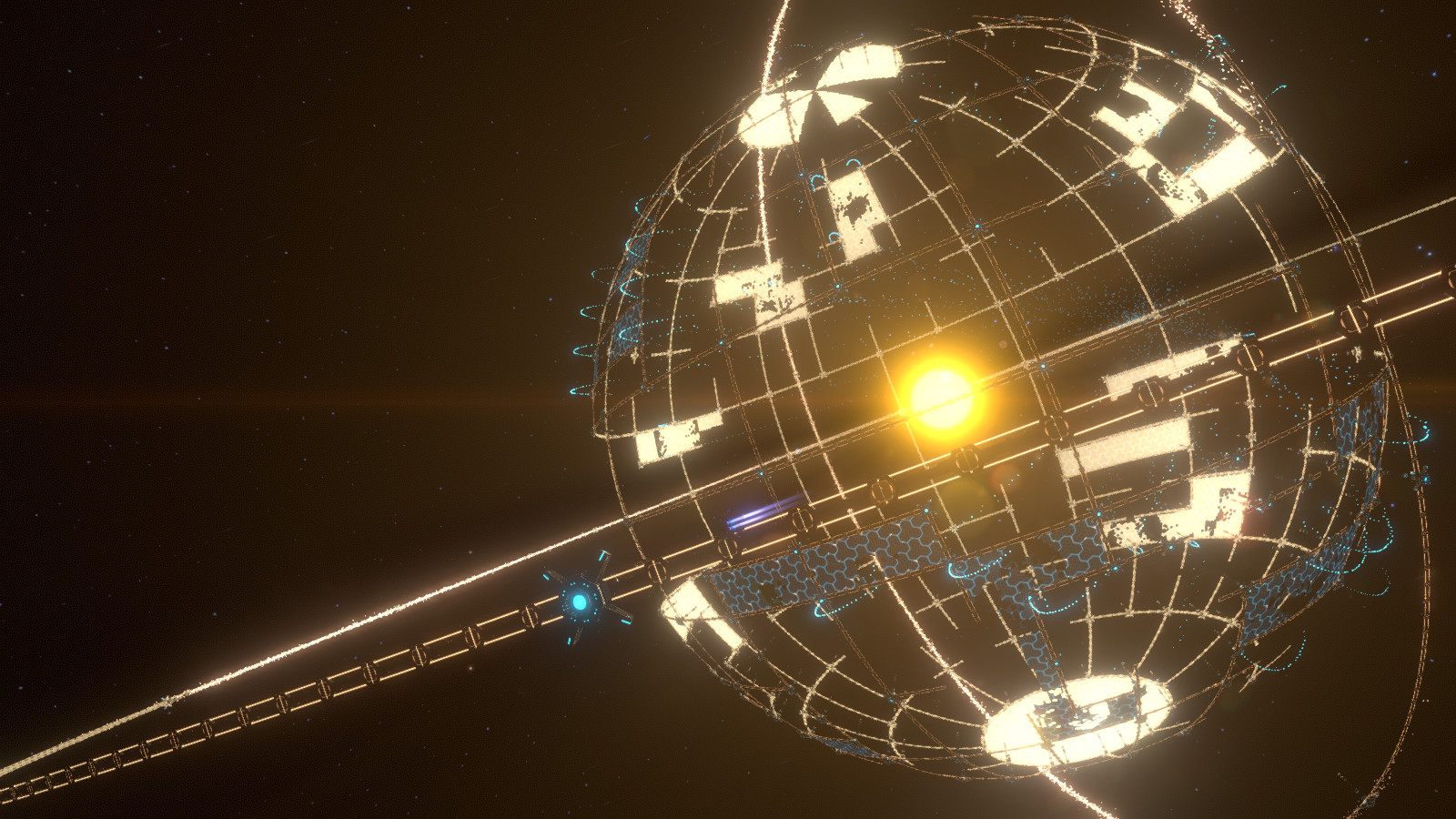 All of this comes together to make a factory game that’s incredibly playable, the kind of thing that kills hours with vicious efficiency.  It’s far too easy to get lost in its systems, have a lightbulb-over-head moment, and realize that you’re about to rip out a few dozen pieces of infrastructure.  The moment of “Oh, that’s how that fits together…” is usually matched by “…and I must build this now!”, leading to long sessions as the in-game planet’s sun rises and sets and the real-world sun starts to do the same.  Right now the only danger in Dyson Sphere Program‘s universe is losing a worrying amount of sleep, but future updates not only include more tech such as space platforms, but also the alien threat that all those lasers were firing at in an earlier trailer.  Even though a detailed roadmap is on hold for after the Chinese New Year, regular updates have already squashed a good number of bugs while the most recent added transportation logistics, so your drones aren’t wasting time carrying near-empty loads.  There’s a lot more on the way as Dyson Sphere Program spends its planned year (subject to change, don’t set your calendar) in Early Access, but even if everything stopped now it would be one of the most impressive factory games out there.  It takes a lot to hang with the giants of the genre, but Dyson Sphere Program has already proven that it’s more than capable of meeting that challenge.