There aren’t tons of instances of mobile games moving to the console market, likely because if they’re successful enough on mobile there’s no reason to unless they genuinely want to expand on their franchise. Granblue Fantasy managed this with a fighting game that launched last year and is even planning a larger RPG adventure at some point if it ever manages to make it to completion. Azur Lane is another such instance of a mobile title making the transition and also one of the most stunning at that, but not in a good way. There are good mobile games, and there are bad ones and Azur Lane stands firmly in the “extremely questionably bad” section of the market, so let’s dive into what can make a person loathe Azur Lane Crosswave title so much and why it’s more than likely deserved.

I originally had interest in this title because I tend to enjoy various anime games now and then. Ys, Xenoblade Chronicles, Daemon x Machina and the Tales of series among many others. I can’t say I knew much about Azur Lane beforehand, but it seemed interesting enough with a focus on initially unique-looking gun combat. Enter Azur Lane Crosswave, a title about girls who have been anthropomorphized into ships of various kinds from around the world. Well, ships with an asterisk, as many of them are also animals for some reason. Rabbits, foxes and cats among others. I won’t claim to be an expert on the lore here, but one has to wonder why some of these girls were subjected to weird chimera splicing with not only ships but actual animals, yet not all of them. Do their supposed animal instincts help them? No, at least not in the gameplay, but this is a title based on gacha hoarding so that’s probably the best explanation there is. Ship parts slapped onto a girl’s head are slightly less appealing than rabbit ears supposedly, though there are a few that fall into that as well perhaps for wider appeal. This might not be the best title to point fingers at and ask about its lore in detail, but when these things are left unexplained it just makes people more curious when the answer is usually “because gacha.” 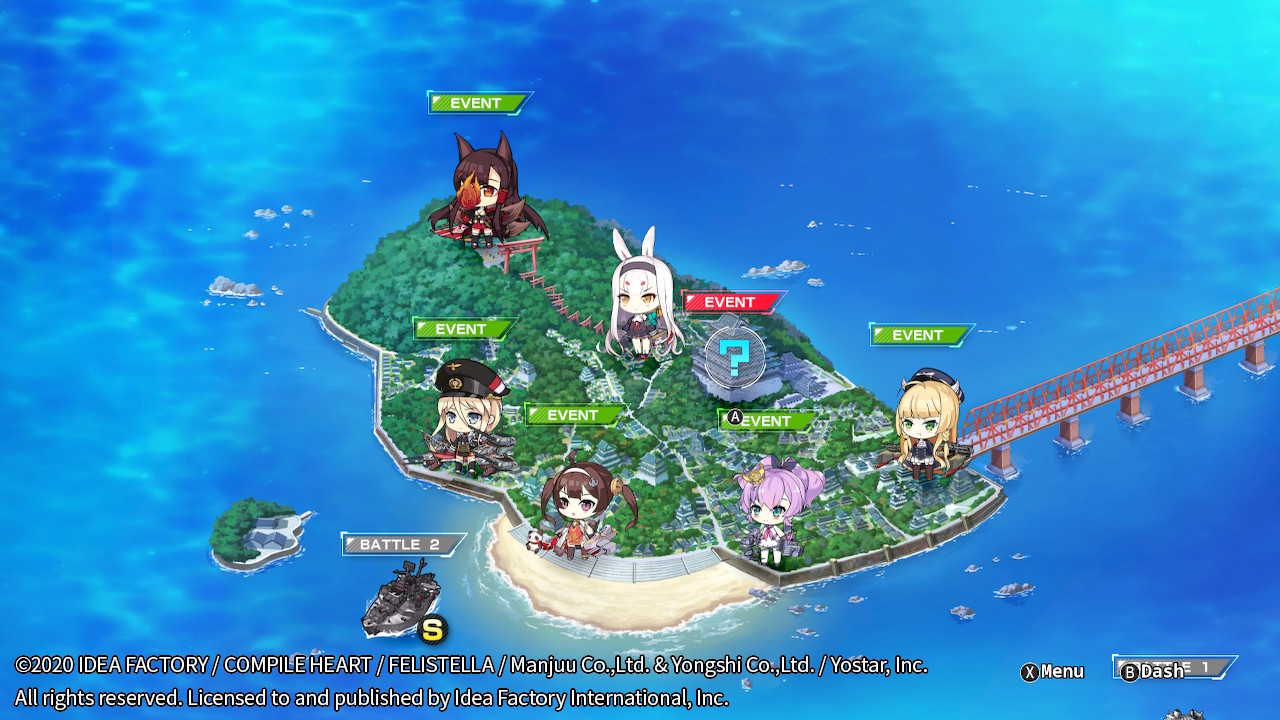 When first starting the story is immediately boring and uninteresting. It soon becomes a race to skip the cutscenes as quickly as possible to get to actual gameplay, which in hindsight is just about as interesting, but the bare minimum to know is that there are various groups of good ships and bad ships. Most of the bad ships are actual literal ships with occasional evil anthropomorphic ship girls amongst but those are few and far between. The characters themselves are what one would expect from characters based on a cheap gacha focused mobile title. Single personality traits that can be summed up in one word, completely uninteresting as characters in this world and the vast majority look like children. Which leads into one of the weirdest elements of this title, that characters can have relationships with the player. It starts out from stranger, moves up to friends and a crush and finally the player can marry one of these ships and yes it’s as creepy as it sounds. It takes a massively long time to get to this point, but the fact it can be done when half the cast of characters look like they still need to hold their parents hand to cross the street is disturbing to say the least. Not to mention this isn’t a one-and-done monogamous relationship like recent Fire Emblem titles but an open invitation to “oath,” as the game calls it, as many as the player is willing to grind for.

The gameplay is yet another disappointing part of this whole charade. At first it’s an interesting concept as parties of up to three can head out into a fight into ridiculously over-animated water, which I will give credit looks surprisingly good on the Switch version given how detailed it is. It’s best to get used to the singular backdrop every stage has too as it basically never changes outside of some mood lighting now and then. These battles have characters using their equipped guns to fight which vary based on the type of ship they are. Players control one character at a time and can switch freely between them while the other two are AI controlled and help in fights. In theory this sounds like a fun and interesting system, but each of these fights usually lasts less than two minutes. Movesets are also repetitive and not engaging in any way. Every character just shoots their variety of guns and the only real strategy is that getting closer to enemies does more damage. Even then, however, most target enemies appear outside of the box players can travel in so characters can only get so close before they’re just mindlessly shooting waiting for their guns to recharge and shoot more until it’s over. Getting S ranks has never been so easy; it’s a shame it just doesn’t feel satisfying. 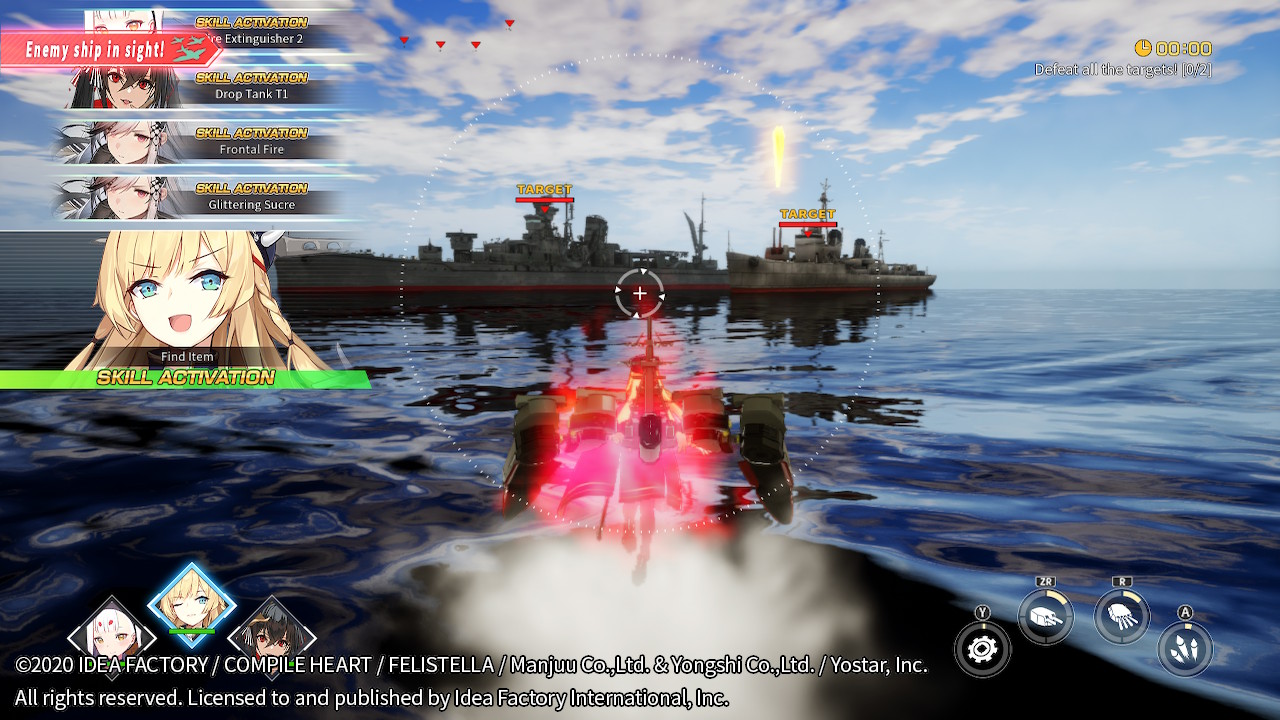 There’s definitely an audience for Azur Lane Crosswave, but it’s one title I can firmly say I never want to associate myself with ever again. The gameplay is bland and repetitive, the mechanics are poorly explained or explored with a lot of it being a bout of trial and error until something sticks. The whole marriage and oath mechanic is disturbing at best and worse the more one thinks on it. A title selling itself for $50, it probably would have been better as a free-to-play with gacha mechanics cause then at least maybe it’d be worth trying out if it weren’t for everything else. It leans heavily into the mobile mindset of having short, repetitive combat instances because they don’t expect people to necessarily sit there and play it all at once. But this is a console game, of course that’s what people are going to do. I won’t deny I’m obviously not the target audience for this title and I wish I’d known that going into it, but at this point I’m not sure anyone is or should be.