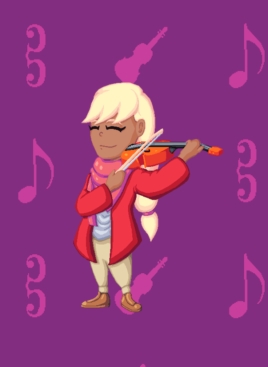 There have been many pixel-art platformers, but nothing on the market has the fusion of RPG-esque battles and rich storytelling that make Viola one of the most-enjoyable experiences thus far of 2021. From the moment the adventure begins, you see that Viola is a character full of self-doubt as she can’t get the hang of her violin. She’s lost belief in her own abilities and with that comes a dramatic drop in her self-esteem and self-worth. It’s so extreme that she winds up opening a black hole and getting sucked into another dimension — kind of like Captain N, but without annoying voice work for Mega Man and Kid Icraus, and thankfully, there’s no vanity-obsessed Simon Belmont to be found either. She does, however, meet a slime and is saved by a kind wolf named Fenrys.

He helps her out in battle and shows her how she can use what she has within her to succeed in battle — and then later, in other parts of her life. Viola is a 2D side-scrolling platformer with turn-based RPG combat, but it’s also a fascinating character study. He tells her that she’s great and then gives her the ability to believe in herself more than she has up until this point. She’s able to open up to him and lets it be known that she’s doing all she can to honor her mother — which leaves her feeling like she can never quite be enough. As their party expands, so does their bond and Viola is able to open up and become friendly with everyone they team up with along their journey.

You’ll meet up with a self-conscious young wizard with short arms who finally feels accepted in your group alongside a brave, valiant knight who wants to protect everyone he can. You’ll meet many creatures — human and animal alike — on this journey who all have flaws and within your party at least, work together to help make each other better. Between dungeons, you’ll have the ability to chat with your allies and in doing so, you’ll each gain something — whether it’s XP or new attacks during battle. Battles are team-based and turn-based, and exciting from start to finish. Players can avoid combat if they so desire, though. 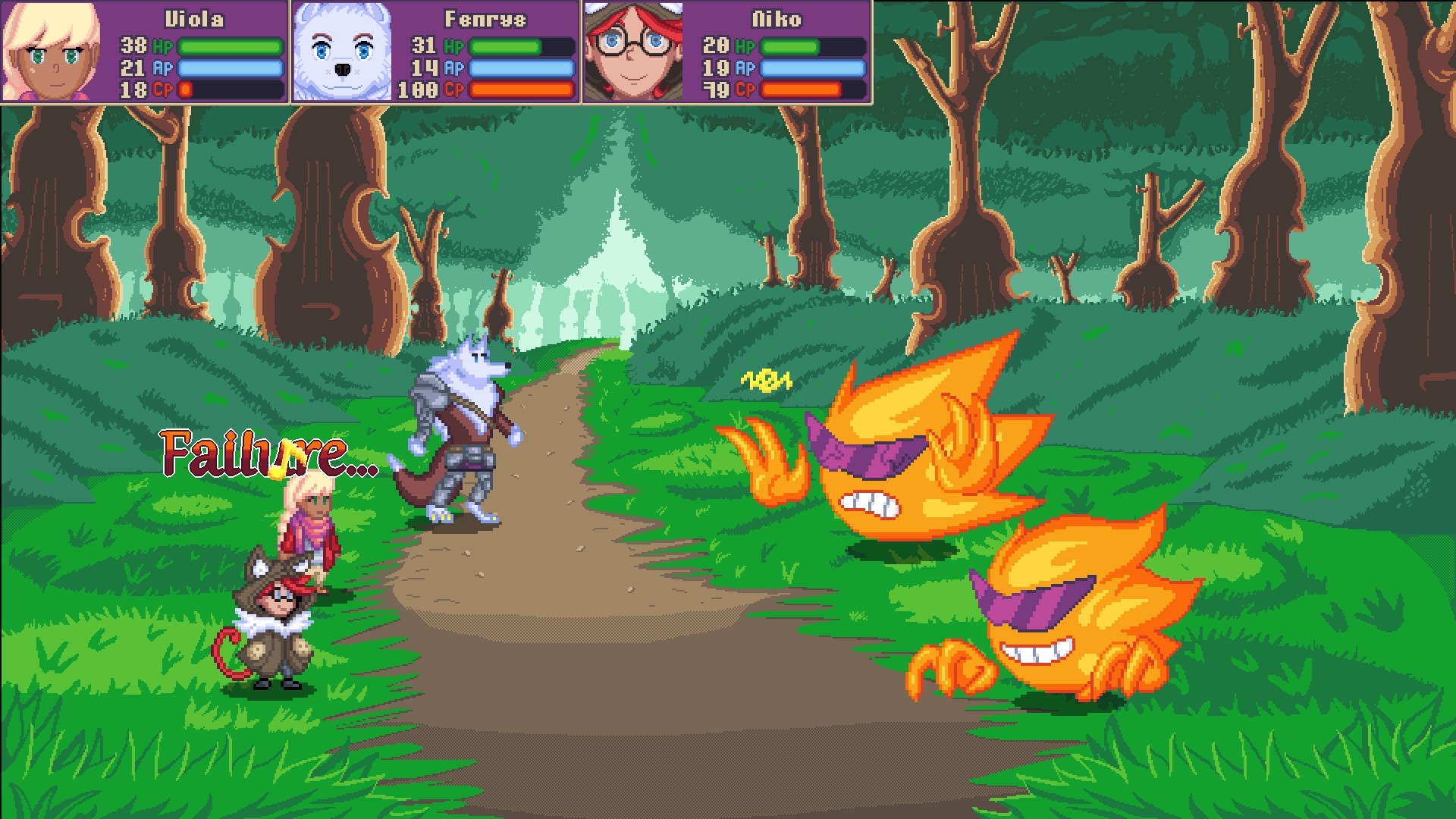 One benefit of the 2D platforming being its foundation is that enemy encounters are optional a lot of the time if you have good enough platforming skills to avoid them. Viola isn’t the most nimble character in the world, but she can wall-jump, double jump and triple jump. Unlike most games, where you would have these jumps be in mid-air, she has to jump in succession to accomplish these feats — so you have to change up how you think about jumping here compared to most other platformers. A triple jump in the best option to avoid some foes, but doing so will take a while to set up since you have to complete three full jumps and arch your jump perfectly to avoid combat. You don’t want to avoid combat all the time, but sometimes it’s best to do so.

Viola‘s adventure isn’t exactly full of checkpoints and you can’t do a manual save anywhere, so you do have to think about which battles to fight and which ones to avoid. If you take on everyone, you will wind up with a powerful party, but you may also wind up too damaged to do well in a boss battle. Taking on most foes is generally the best option, especially early on in the stage when you have the highest amount of health. This allows you to get a feel for a stage’s new enemies while also leveling up whenever possible. I like that leveling up refills both your health and effectively magic points in the game as that encourages you to do well and play better.

Combat is from a side perspective and uses a zoomed-in perspective to drive home how big some of your enemies are — and showcase how zoomed-out the main stages are. Attacks take the form of either QTE-style button presses, button-mashing or button-holding techniques with a mix of mashing and/or QTE sections in them for heavier attacks. There’s a trial and error aspect to the battle system as you do have an elemental system at play and will need to figure out which enemies are weak to magic, which are resistant to physical attacks and the strengths and weaknesses of your party members as time goes on. Generally, having a powerhouse, healer and all-arounder is good, but sometimes, you need to go heavy on the damage output since knights can help protect the whole party. 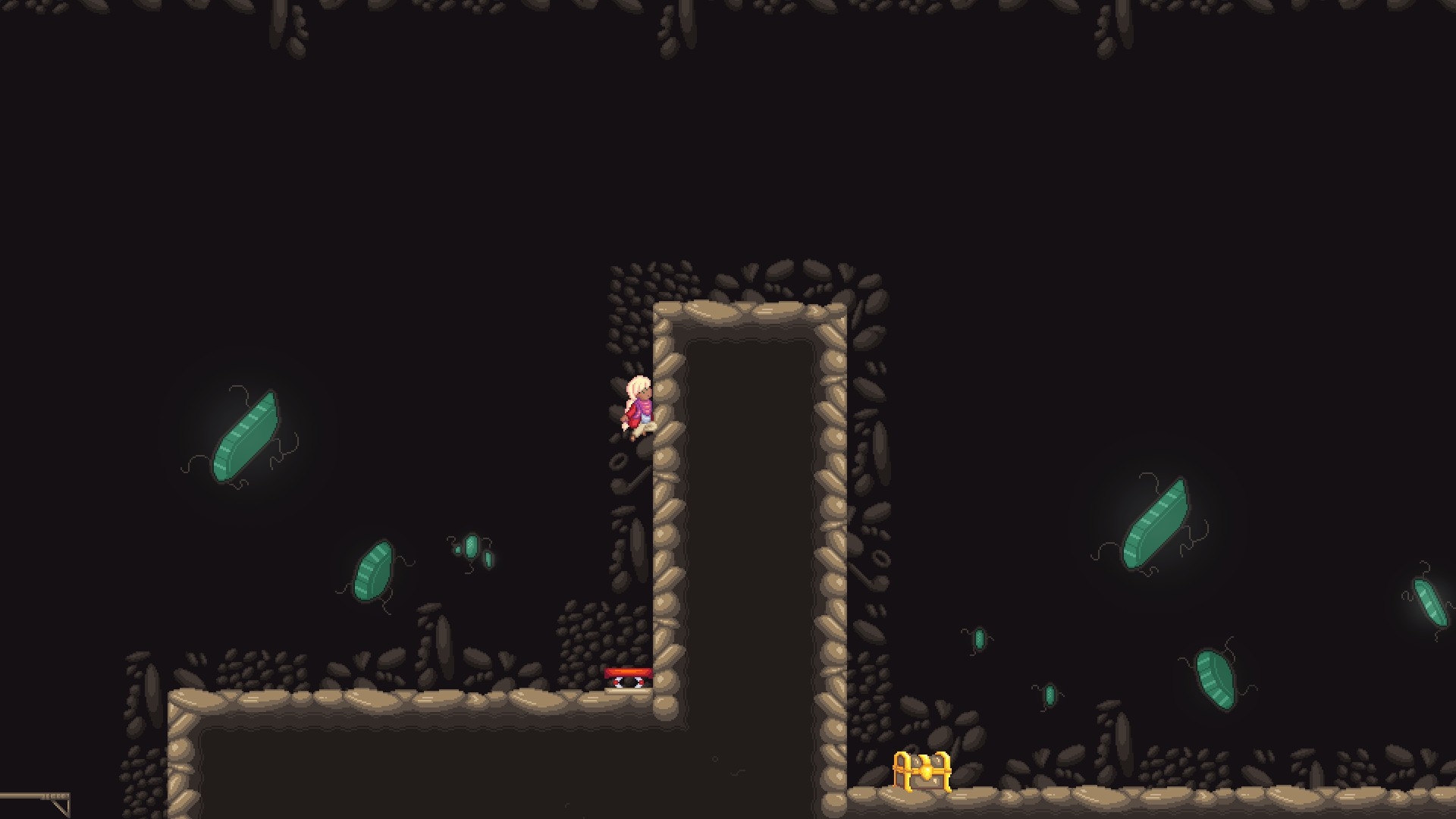 This allows you to have a defense-heavy strategy at times where you use the knight to shield bash, then guard allies with his shield before enabling a healer to keep the party strong and then using brute force to take out foes one-by-one. Singling out foes usually works best as it limits how many turns your party can be attacked in — thus minimizing damage throughout longer battles. It’s a solid technique for self-preservation since you can’t always count on having a lot of healing items, although you can stock up on those for free thanks to the exploration system. Exploring stages allows you to find health pickups, mana pickups and even curative power-ups to ensure that you have an easier time and help minimize the chances of death.

Viola does have rough edges to it that will hopefully be smoothed out over time. During our time with the game, Viola could get stuck in the environment, with some of these issues being met with just jumping out of them, but when that can’t be done, you’re in rough shape. One instance thankfully early on had her get caught in a platform that couldn’t be jumped out of or fallen through. This led to a hard crash and loss of progress since there’s a lack of manual saving — so that’s something that hopefully gets fixed up over time. Other than that, the experience is smooth and it plays like a dream with controllers and includes the ability to have both PS4 and Xbox prompts out of the gate. 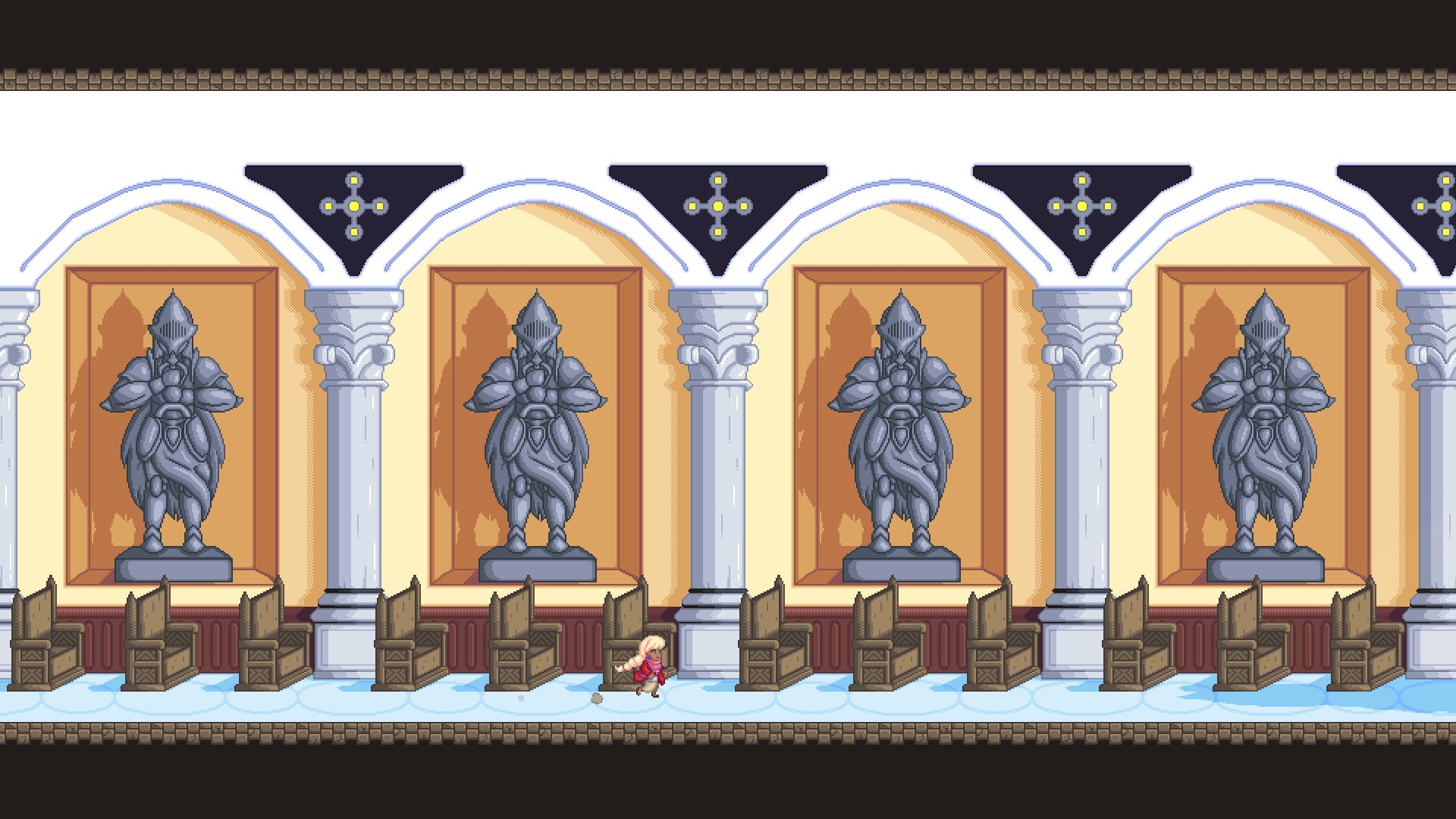 Viola‘s pixel art style is gorgeous and mixes in a simplistic look in theory with the zoomed-out side-scrolling areas with a higher level of detail that becomes apparent when the action is zoomed-in. There, you can see how much work went into making the characters expressive. Things like smiles ring true even without larger portrait art and it’s a testament to strong art design that you can tell what a character is feeling just through body language in a game using sprites. The large portrait art is nice though, adding an extra layer to characters as their expressions get bolder. The environments themselves also look nice, with a fair amount of detail and enough differences in each area to help prevent them from seeming like copy/paste fests that exist to fill time.

The sound design is heavy on the soundtrack, with a lot of stringed instruments alongside pianos and everything else your allies play. It’s a relaxing soundtrack for the most part, with action-packed pieces being saved for major boss battles and the interactive pieces that you’ll play for spells. Attack sound effects are well-done and showcase the kinds attacks being used as well as their power. You’ll be able to tell that an attack does more damage based on how loud it is and that gives you a nice idea of what kinds of attacks to use against certain foes since a tinny effect lets you know it won’t work well, while a satisfying, louder sound lets you know to keep using that kind of attack. 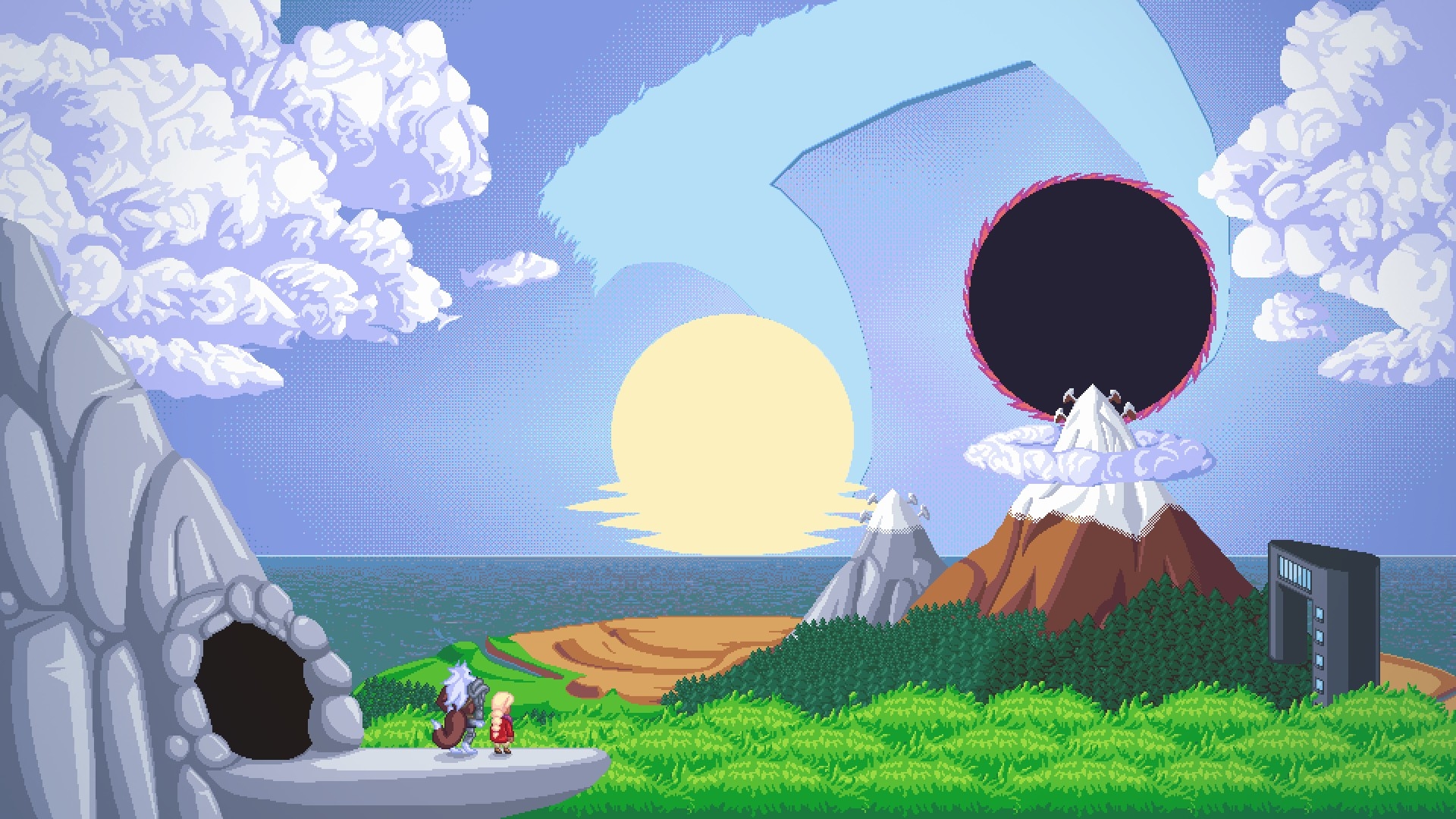 Viola is a fantastic coming-of-age tale that manages to successfully mix satisfying platforming with rewarding turn-based RPG mechanics. The cast of playable characters is a blast to play as and more importantly, to learn about. They play off of one another nicely and despite the game not having voice work, there’s a sense of chemistry and a bond forming between them as their time together grows. The game does have rough edges when it comes to polish, but it does play like a dream with a controller once you get the hang of its somewhat-quirky jumping mechanics. It’s a great-looking and sounding game and one that should please anyone looking for more action in a turn-based RPG framework.