Consumers have needs and businesses try to meet them; it’s the nature of every exchange since people came up with the idea of wanting more.  Generally the cost is a matter of matching desire to value, with the seller working to enhance the former while the buyer plays down the latter.  That all falls apart when the buyer is a cat, however, because not even they know what they want from one moment to the next, much less have any appreciation for how money works.  Or at least regular cats don’t, but Martian cats seem to have a good idea of what they want and how much they’ll pay for it, and that’s where an enterprising young factory builder can supply the needs of an endless stream of feline buyers in a quest to do the impossible: create a functioning AI model of a cat’s mind in order to fully understand them.

Selling to something isn’t a bad way to understand it, and while that won’t map out the things money can’t buy, it at least gives a nice idea of more material needs and wants.  In Learning Factory you’ve got a wide open space that’s seen better days, the remains of old machinery to help you get started, and a cat gate that brings in an endless supply of kitties to shop at a basic store.  The space is a long way away from what it needs to be, but that’s what a bit of industrious building is for.  The young boy has free reign of the place, which is huge but not ridiculously so, and it doesn’t take long to figure out the very first product to sell.  An old cotton harvester is close by a run-down yarn-maker, and after scavenging a few conveyor belts everything gets hooked up to turn raw cotton into cotton bales, the bales into balls of yarn, and finally a last quick trip to the store.  Where they sell for a single coin apiece. 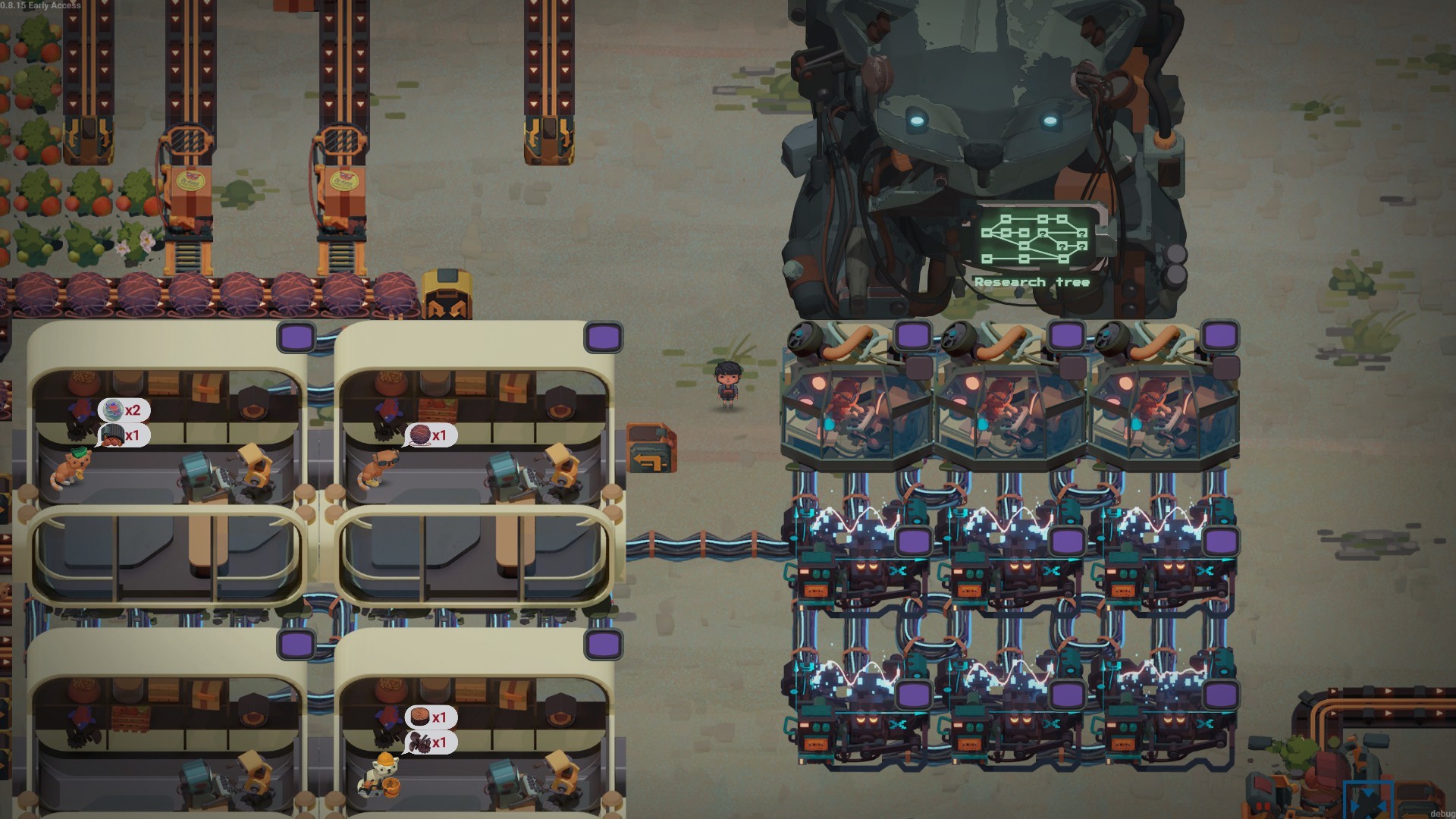 That’s not a lot of cash flow, and the speed of the yarn-maker isn’t that great either.  Still, it’s a start, and wandering the land turns up some other old machinery that can be of help.  A spare splitter divides up the cotton line, which is experiencing heavy backup due to the slow speed of the Yarn Ball Maker.  Harvesting ruined equipment gives metal, which can be made into conveyor belts, and there are trees growing around to supply wood.  Divide the conveyor belt into multiple lanes going to three yarn machines, plus maybe build a loom to weave cotton into bolts of cloth, and the money flow starts to ease up a bit.  Meanwhile the cats’ needs are getting more complicated than just yarn balls, so new machines are needed to create newer and more complex items that take more than just cotton to create.  Scratching posts need metal, wood and cotton, for example, but just as important is the little issue that every single item in the store sells for one coin, and that’s just not going to cut it.

Every good factory game needs a research tree and Learning Factory‘s tech is no exception.  The researcher at the base of the sphinx is ready to help, but science isn’t cheap.  All the coins spent in the shop go to new tech, which includes everything from new items to sell to new stores to sell things in.  The starter store is the most basic, with everything selling at the cheap preset price, but the first new store lets you manually adjust prices.  Honestly, I never bothered to build one because aside from being a factory game, Learning Factory is also about using machine learning to create optimal pricing models.  How much does a cat think a scratching station is worth?  I’ve got no way of knowing, but building a couple of Smart Cat Stores, wiring them up to a Linear Regression computer and providing it with a couple data storage units, that’s going to build an automatically-applied pricing module.  True, a few items might sell for too little and some cats may feel ripped off, but the more things sell the better the model gets. 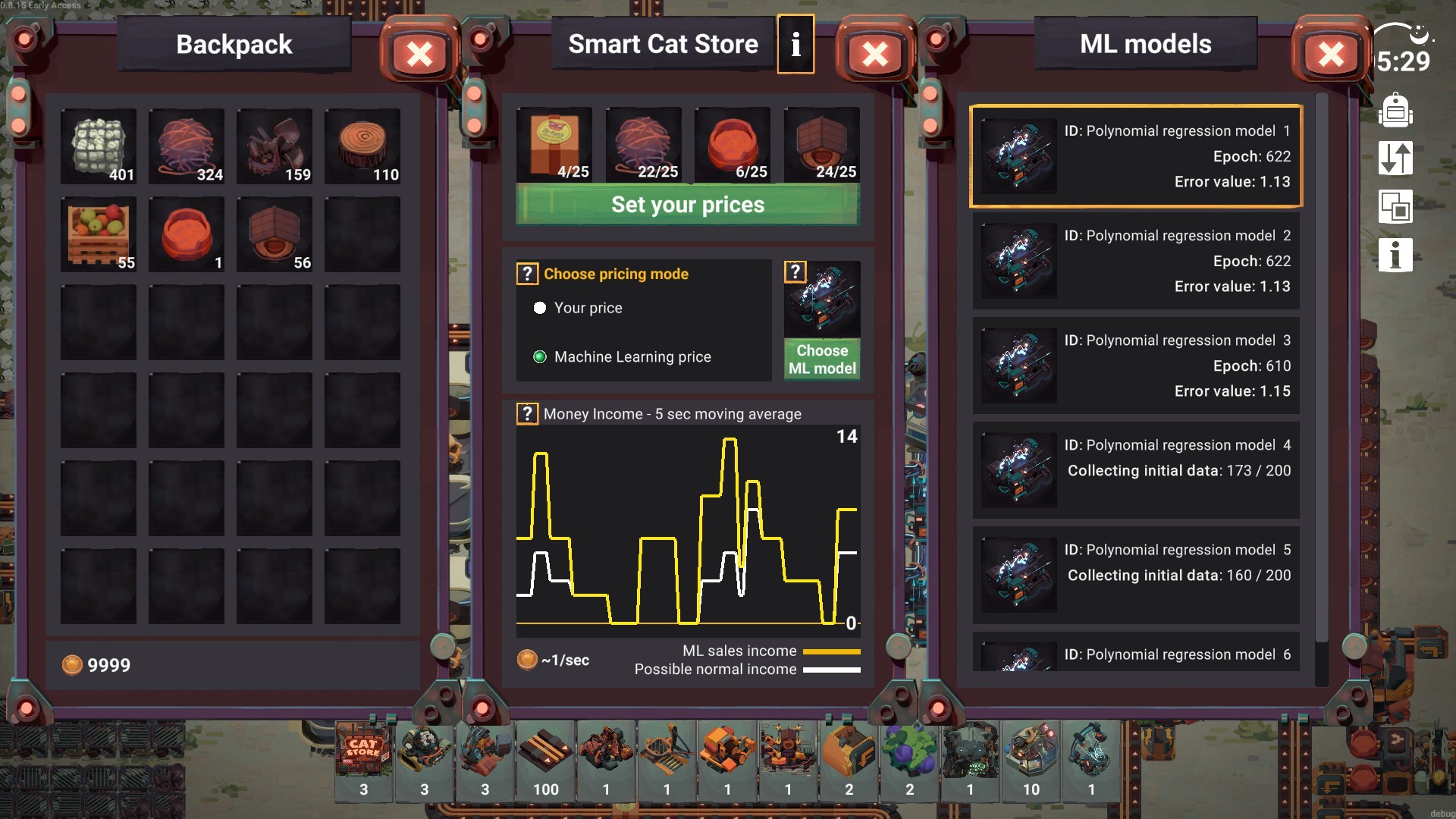 Learning Factory is at its heart an introductory factory game that’s designed around learning not just how the genre works but also as a gateway to the real-world concepts it introduces.  What’s the difference between linear regression and polynomial regression?  The information for these tools is divided between how it works in-game and outside of it in the real world, and for those who are curious enough to want more the main menu has links to a host of data.  Wikipedia articles, free online courses, YouTube videos and more are all available for the curious mind.  This love of sharing information doesn’t spread far enough into the main game yet, as I learned when trying to figure out why conveyor belt tunnels didn’t seem to do anything, but as polished as Learning Factory is so far it’s still in its early stages.  The tech tree isn’t even a third of the way done yet and there’s a nicely-huge laundry-list of new features in development.

In its early state, though, Learning Factory is already an intriguing new factory builder.  The solution to the tunnel problem mentioned above, for example, is that there are two layers to build on, and while the lower layer doesn’t allow construction machines, it’s still a great way to route products all over the map without turning the main level, where all the resources are, into a tangle of belt-spaghetti.  Apple, fir and regular trees grow as the days pass, as do the cotton plants, slowly expanding their forest areas, and one of the optional researches is a Turing Tree.  Lay these down in a pattern and it starts playing Conway’s Game of Life.  What good does that do the factory?  Not a bit, but it’s still fun to see.  There’s a lot more to come in Learning Factory‘s quest to understand the kitty mind by way of rampant commerce, but it’s already a cute and incredibly likeable introduction into the endlessly, weirdly satisfying world of production logistics.  If you’ve got to make a giant machine, after all, it might as well be in service to cats.