Data East recently released eight of their arcade classics from the ’80s and ’90s on PC under their Retro Classix collection. A full list of the games can be found here, along with a brief description of each one. At Hardcore Gamer we enjoy games from all eras of gaming, and know that not all ports are created equal, so we decided to spend some time with a few of these newly re-released titles and see how well they hold up over time, especially since a couple of these titles were some childhood favorites.

Bad Dudes vs. The Dragon Ninja is a 2D beat ’em up from 1988. It was ported to the NES as Bad Dudes, where it committed the cardinal sin of B jumping and A attacking, but a 64 life cheat code helped make up for the that. The arcade graphics took a massive hit on the port to the 8-bit console, but Retro Cliassix brings us the arcade version. The action is straightforward; each of the Dudes punches and kicks their way through each level fighting off ninjas. The goal is to rescue President Reagan (the game calls him President Ronnie, but we know who he is) and when the Dudes successfully complete their mission they get to go out for a burger with the president. It’s not a long game, but for good old fashioned beat ’em up action, it scratches the itch. 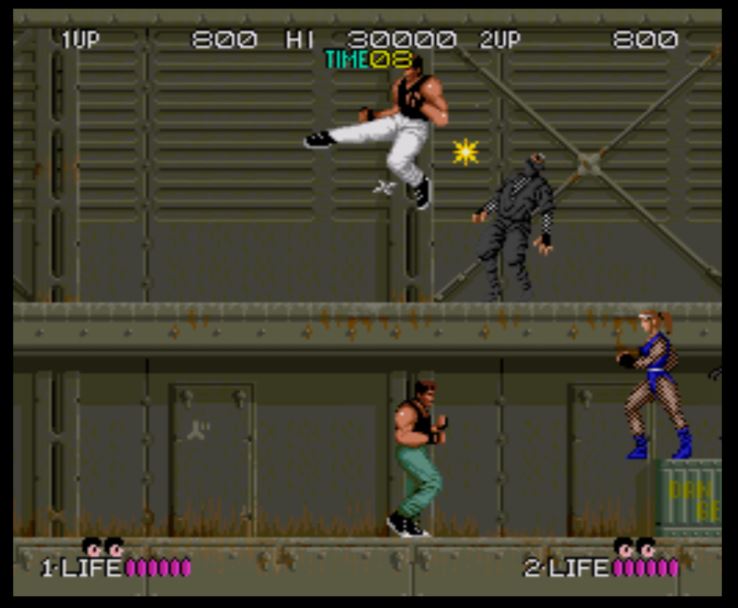 Two Crude is a port of 1990 beat ’em up, which was known as Crude Buster in Japan and Two Crude Dudes in the 1992 Sega Genesis port. This a game that’s so stupid it’s brilliant. The premise is that New York is destroyed by a nuclear explosion caused by the terrorist organization Big Valley, who now occupy the ruins of the New York. The US government hires two mercenaries and pays them well for their services. These mercenaries are the Two Crude Dudes, who compared to the other people in the game are approximately eight feet tall with physiques that suggest they eat MetRX breakfast cereal in bowls of Muscle Milk. These roided out renegades have no problem lifting cars over their head to effortlessly throw at their enemies, whether they be humans, robots or some other bizarre lab experiment mutation gone horribly wrong. Throwing cars at enemies never gets old, but one of the perks of playing this in two player mode is the other player can become a projectile. The gameplay is similar to Bad Dudes, but this is if Bad Dudes was an ultra-violent Saturday morning cartoon, and while the basic game mechanics are similar, Two Crude is more fun and generally the superior game. Two Crude is utterly ridiculous, but its fun factor matches its absurdity. Out of the four games we’ve taken a look at this is the personal favorite. 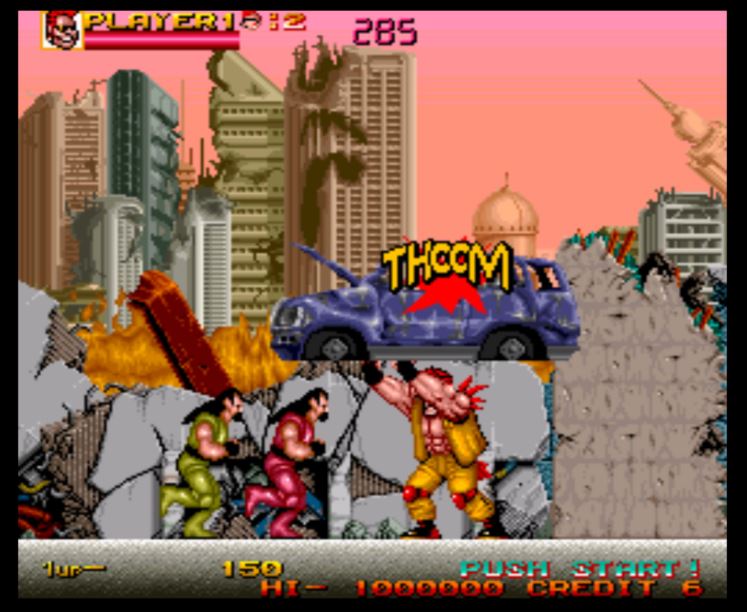 Joe & Mac – Caveman Ninja is an arcade game from 1991 which is apparently from an era when people still believed homo sapiens and dinosaurs all lived in the same period. The player controls either green-haired Joe or blue-haired Mac as they battle enemy cavemen to rescue a bunch of capture cavewomen. A feature about this title that was rather uncommon during its release is there are branching paths at the end of each level so the route to the end of the game is slightly altered. In addition, the player can choose one of three possible endings after defeating the final boss. This action platformer features cutesy cartoon graphics as the two cavemen ninjas run and jump through various environments, fighting off anachronistic dinosaurs, cavemen and currently extinct large mammals with a variety of stone age projectile weapons. Joe & Mac is actually quite an enjoyable romp through prehistory as there is just something inherently fun about fighting giant cartoon dinosaurs. It may not be brought up as often as some other games when discussing best action platformers of the ’90s, but for fans of games from that era this one is still worth playing. 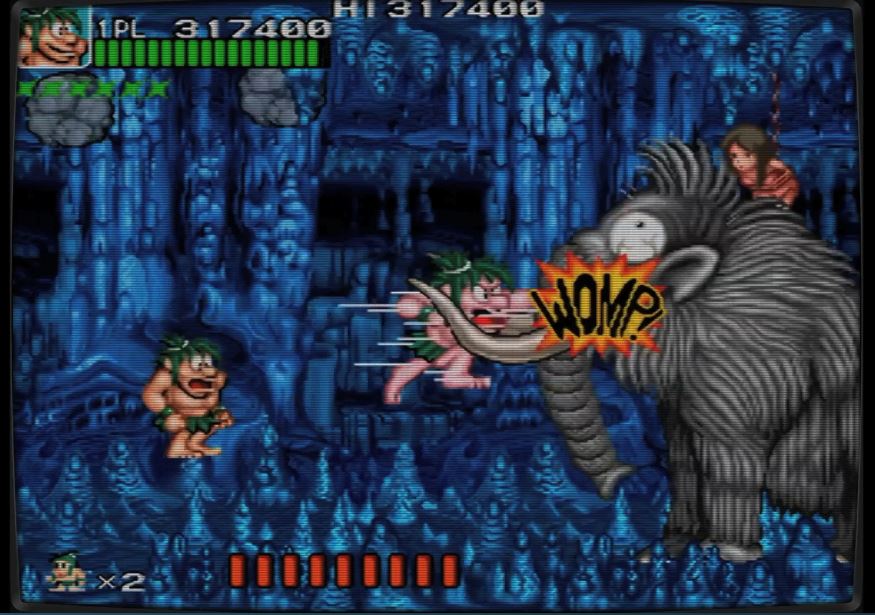 Super BurgerTime is actually a game I didn’t know existed. I was aware of BurgerTime from the Data East collection linked up in the Bad Dudes paragraph along with memories of playing it on the TV in the van where the Ecks vs. Sever incident occurred, but this sequel’s existence was news. This sequel has players controlling Peter Pepper Jr, adds a two player mode and features greatly improved graphics from the original. The premise is basically the same as the original, Peter has to navigate a series of ladders to get all the burger toppings to fall into place while fighting off hostile vegetables with various cooking utensils. The gameplay seems like it used the original Donkey Kong as a template for the level design, but took it in a completely different direction. While playing Super BurgerTime to get an idea of what to write about I found myself playing several levels. It is one of those games that’s easy to learn but can take a while to master which makes it easy to see how this could have consumed a lot of quarters back in its arcade days. 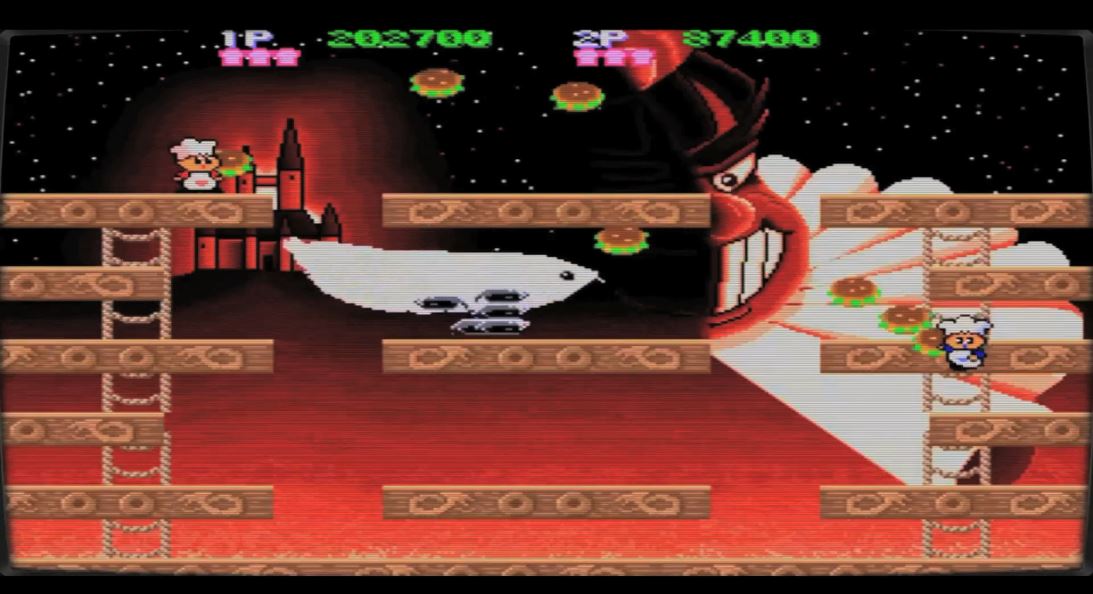 After sampling some of the games in the Retro Classix line of games we can confidently say that these titles hold up well enough to still be fun today. Each game is normally priced at $6.99, which is probably what a couple people could spend playing through any of the games in an arcade. The games all faithfully recreated their arcade experience, which was further enhanced with the arcade cabinet boarder around the game with the joystick and player one and two start buttons. The nostalgia market is the main target of the these PC ports and they do deliver these games as they were originally released in the arcade. Playing through these four games did perk my interest in the other titles, particularly Gate of Doom and SRD: Super Real Darwin.