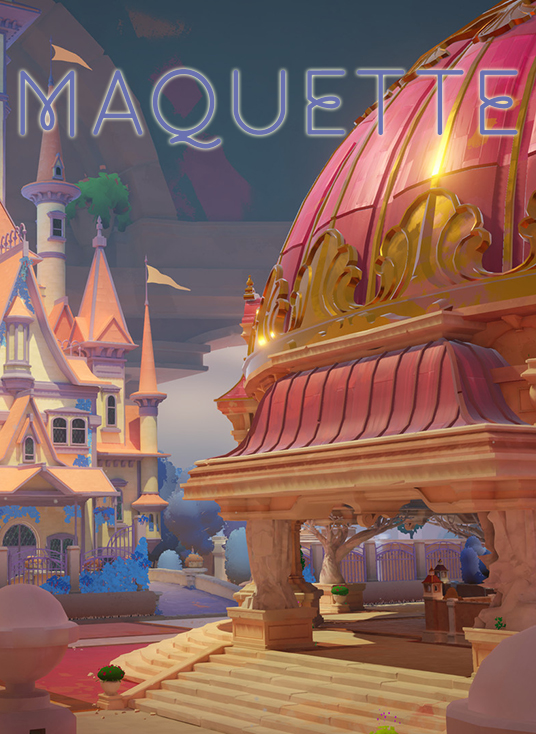 Relationships are not easy.  They require patience and attention, which are two things in short supply for people in their early 20s.  Some people can manage it, sure, but that’s an exception.  For the most part, people at that age are still out there meeting people and learning how to make a commitment work.  Michael and Kenzie in Maquette are no different, and the story is clear from the start that this isn’t going to end well.  They give it a good try, or at least they think they do, but seeing as Maquette opens with Michael finding the sketchbook they used to share the odds of Happily Ever After are basically nonexistent.

It’s a solid introduction for a visual novel, but Maquette tells the story of its doomed romance in a very different way.  Starting out in a nighttime garden, you/Michael wander the paths of memory to a courtyard that contains a model of itself in its center.  While the story is that of a romance from its very beginnings to its utterly avoidable end, the game of Maquette is a first-person puzzler set in a small but recursive world.  The model is the level, which means you can pickup, for example, a tiny little key, drop it in the model, and all of a sudden you’ve got a much larger key as it thuds to the ground outside.  Items come in three sizes — small, medium and large — and you can always carry the small and medium ones no matter how unlikely it may seem to be able to lift six foot tall wooden staircase.  Scale can be kind of weird in the hallways of the mind.

The basic structure of Maquette is that the square courtyard has four areas coming off it, each of which corresponds to part of Michael and Kenzie’s story.  Michael is the narrator so it’s his memories and viewpoint we’re seeing, from the earliest coffee-shop meeting with Kenzie through their dates and moving in together.  The four areas off the courtyard combine to form a chapter of the story, and once solved, a cutscene told in the form of a pastel illustration segues into a new set of areas to explore and puzzle through, with the only constant being the courtyard and its model of the level in the middle. 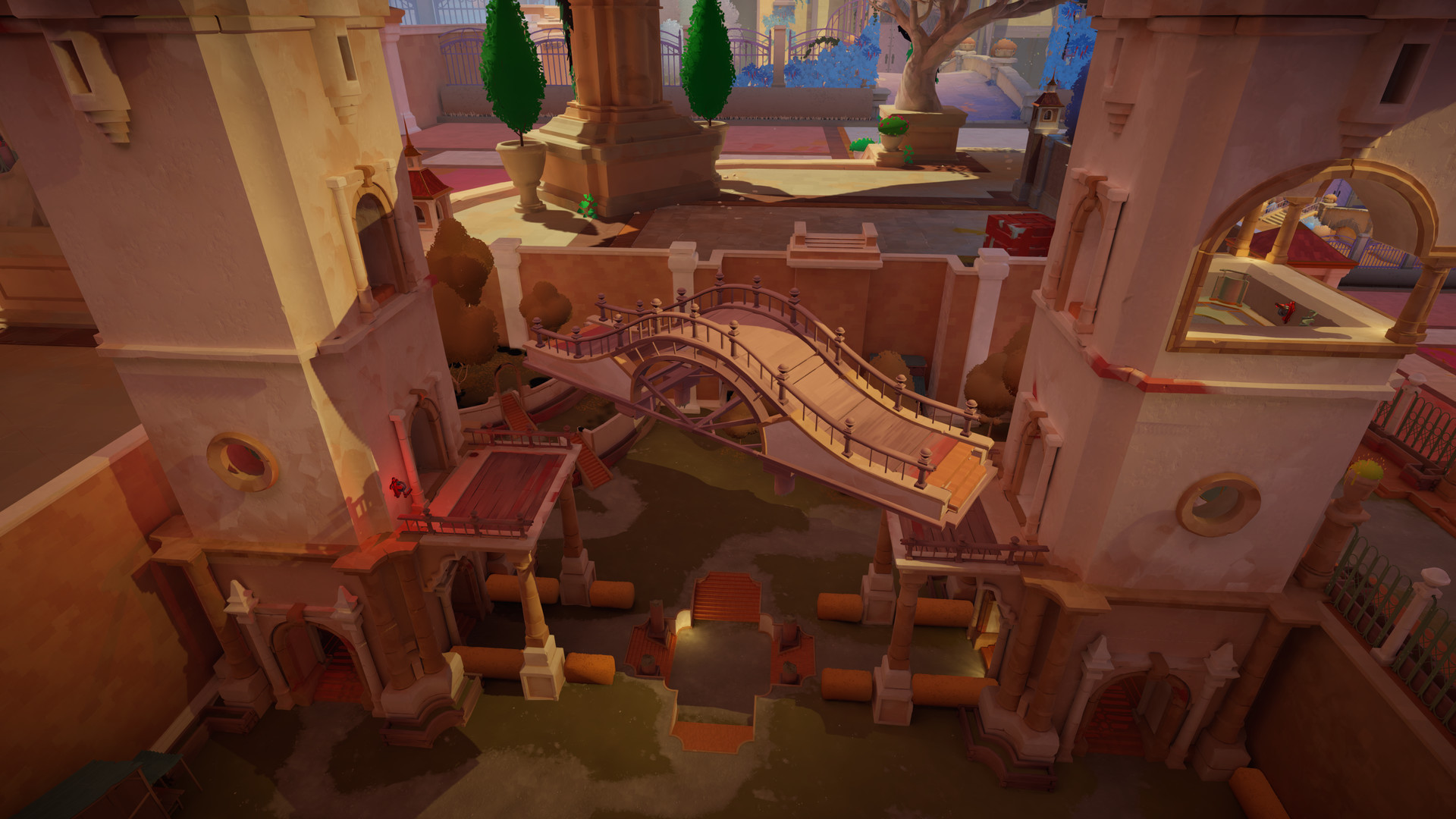 The model is the heart of the puzzle mechanics, and dropping things in is how you directly affect the level.  It’s done in clever ways as well, with items that look like one thing becoming another depending on their size.  An early example would be a key, which is great for opening a door but also, being nicely flat, acting as a convenient pathway when scaled up.  Drop the key in the gap of an elevated path and suddenly it’s a key-shaped bridge.  If you’re paying attention you can even see the giant version of the key fall into place, but if you’re at just the right angle you might notice an even more enormous key dropping down past the human-scale area. The world, as it turns out, plays by the same small/medium/large rules as the items do, and once you venture beyond the limits of the regular-sized section you start to feel very, very small.

It makes for nicely-clever puzzling, although rarely difficult.  It’s usually straightforward figuring out where to go next, and the only time it feels hard is when needing to unexpectedly stop running on autopilot and have to think for a minute.  The key-bridge mentioned before, for example, is obvious because it’s not like there are all that many tools to work with and the goal is obviously past the gap.  Later puzzles require observation to solve but it’s never much of a head-scratcher.  Even so, it’s still satisfying to realize Shape goes through Hole, once you notice the negative space, and then run back to the model to grab the newly-freed tool from the ground outside the tiny little version of the place you were a minute ago.  Having said that, I’ll admit I completely missed this in one area and spent way too long not seeing what should have been obvious, and then solved the puzzle by abusing the physics of the game world instead.

What stands out most in Maquette isn’t the puzzles, but rather the art design and story.  The world is by far the best part of Maquette, with each new environment being a good place to explore, not overly filled with detail, but still gorgeously designed.  This in particular pays off with the multiple scales of the level, from the model version all the way up to the giant-scale area.  The story, however, doesn’t fare so well, starting off weak as the pair of “too cute for their own good” artists fall in love in the most sanitized way possible.  It’s only when the cracks in their relationship kick in that they start feeling like characters rather than a caricature of San Fransiscan cool.  By then, though, it’s a bit late, and there’s also the frustration of watching the pair not lift a finger to try to salvage what they’ve got.  They’re young and in love, and slowly coming apart, and neither seem to realize that just maybe their little storybook romance isn’t going to survive their neglect.  Eventually and inevitably it all breaks down, and the frustrating thing is that narrator-Michael is appropriately sad, broken up, devastated, but doesn’t seem to have learned a thing outside of given enough time, he’ll eventually be able to move on.  Maquette doesn’t need a moral, but it would be nice to think there was a point beyond the emotional roller coaster. 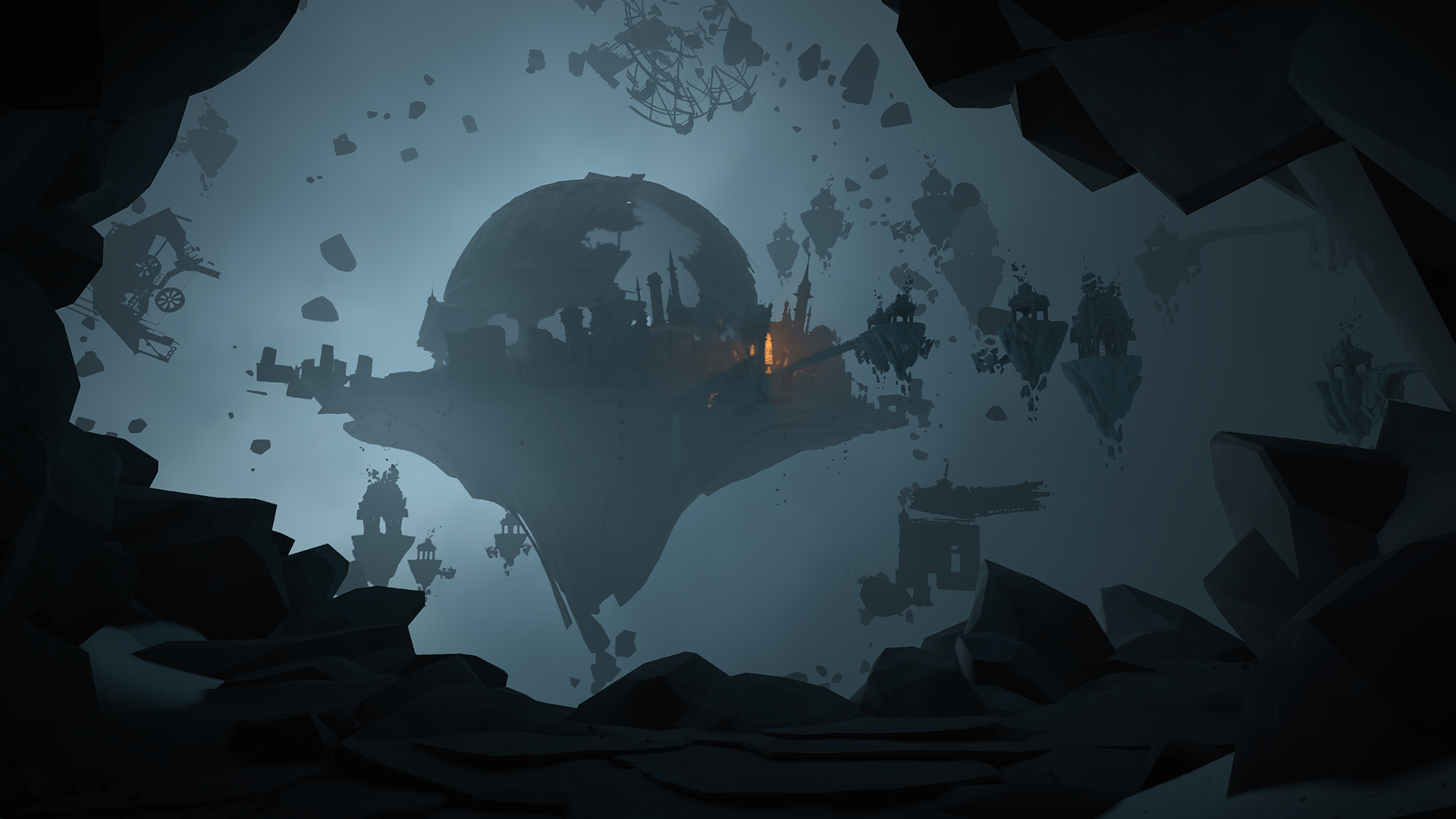 Even with the annoyance of the narrator being so utterly clueless, there’s no question that Maquette is effective at illustrating the pain of a good relationship gone bad.  The integration of puzzles and story never gel as it should, with only the setting feeling like it was at all related to the narrated events, but even so the pace of each was strong enough that it never feels like things lag — solve puzzle, get story.  Usually just a few lines at a time, hovering over a wall or other piece of environment, but it still felt like a nice way to mark progress as one solution flowed into another.  Without the story Maquette would still be a nicely-intriguing puzzler, and the scaling of the environments made for truly enjoyable moments when what seemed like a small irrelevant detail on a prop turned into the solution to a whole area.  At this point it should be clear that I’ve got mixed feelings on Maquette, but there’s no question that I’m glad to have played it and won’t be forgetting the game any time soon.