The Grand Theft Auto series hit the big-time in 2001, with GTA III getting word of mouth hype that led to it being sold out all over the place quickly. With a scope that was unmatched by anything and a then-disturbing level of violence that surprised many, it changed the industry and led to the boom of sandbox games that resonates nearly twenty years later. Before the third mainline entry, the GTA games were a crude overhead, open-world series that felt like a rough draft of a concept held back by the technology of the time. GTA III felt like what the initial vision was always supposed to be, but Vice City aimed to fine-tune the formula and completely change the setting — and do so in only one year’s time.

In that year, the protagonist went from the then-nameless and voiceless Claude to the Ray Liotta-voiced Tommy Vercetti. A foul-mouthed mobster from Liberty City sent to Vice City to take over the town after a big drug deal goes awry. Teaming with Lance Vance and Ken Rosenberg, alongside other assorted criminals he meets along the way, Tommy does his best to take over and kick as much butt as possible. GTA III had great driving, but iffy shooting and melee combat alongside a somewhat poor story from a narrative perspective. Rockstar set out to remedy as much as they could and gave the story more focus, while fine-tuning some aspects of the shooting and making melee combat more of a focus with a vast array of new weapons and a separate shop for melee combat in the form of a hardware store to really drive home that Tommy is willing to use anything he can get his hands on to take over. 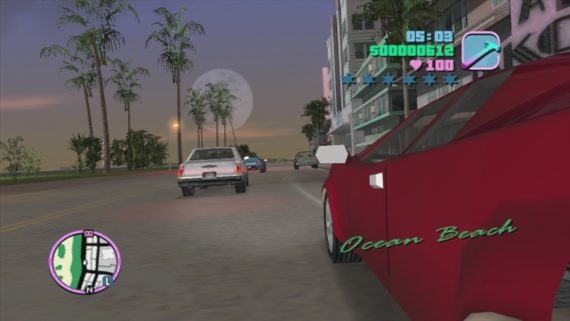 The world of Vice City is very much inspired by what was seen in Scarface and Miami Vice — with a bit of the violence of the former with the insane fashion of the latter, alongside a slew of ’80s pop culture thrown in. In one game, you have not only a recreation of Tony Montana’s mansion in Scarface, but also get chased after expies of Crockett and Tubbs from Miami Vice — which can happen while “Crockett’s Theme” place after you run over a character that very much evokes Michael Knight from Knight Rider, with a KITT expy available to grab at various points in the game. No GTA game before or since has quite nailed its era as well as Vice City did. The amazing thing in hindsight is that more time has passed between the game’s release and now than had passed between its ’02 release and the time period it was parodying.

The look and feel of the era is represented wonderfully, with bright neon lights adorning the buildings and looking stunning at night. The revamped cinematic camera does what it can to replicate Michael Mann-esque shots off the sides of cars in real-time, and it’s quite impressive when you consider that this is an early PS2-gen game. Environments feature a lot more detail than in GTA III and while that world was more run down in more places, Vice City does a better job of showcasing areas that are both rundown when needed, but also high-class and well-maintained. There’s a greater variety of area types too, including a mall you can run roughshod in to earn money quickly. 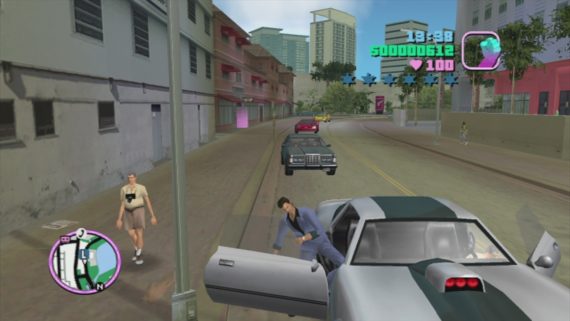 The mission structure is more layered in VC than it was in III and the cast of characters has a lot more variety. GTA III was a mix of gangsters and other criminals, while VC offers up a mix of criminals, but they’re a lot more vibrant and diverse. There are a number of mission types to enjoy when you take over businesses, including a mx of car combat with the Kaufman cab company and multi-tiered missions where you have to do things like blowing up a building using bomb drops from an RC copter. The business takeover aspect of things allows you to earn a lot of money and offers up quicker access to the game’s most powerful weapons. Vice City showcased more of what could be done in 3D with the GTA formula, and evolved the mission structure while offering up a nice boost in graphical fidelity compared to III.

While the game gained fame on the PS2, the original Xbox version is probably the best-playing version nowadays. It’s fully playable on the Xbox 360 and includes the entire original soundtrack — unlike the mobile port, which is playable with controllers on mobile devices and things like Android TV and Fire TV devices, but is hurt by the OST changes. Visually, the Xbox version features lighting flourishes that aren’t on the PS2 version alongside more detail on everything. Cars look a lot better here and character bodies don’t have the giant mitt hands that the PS2 version had and have better-looking facial animations and mouth movements. GTA Vice City has aged quite a bit when it comes to the character models, but the environments and vehicles have aged nicely — and the lighting effects have held up well over time. 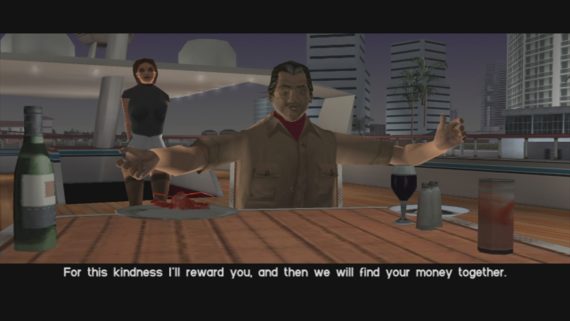 Vice City’s soundtrack is one of the best licensed OSTs in history. No soundtrack since, including the later-released prequel in Vice City Stories, featured a better all-encompassing soundtrack of early to mid ‘-80s tunes from all genres. You have a blend of Michael Jackson alongside Grandmaster Flash, Ozzy, Iron Maiden, Motley Crue, Loverboy, Tears for Fears, Foreigner, REO Speedwagon, Hall & Oates, Run DMC and Rick James. The OST was so vast that it led to the creation of a seven-disc release. The voice work is top-notch and VC has some of the most replayable chat talk radio featured in a GTA game yet — with hilarious commercials and the best banter to this day.

While it may be set in the ’80s, GTA Vice City remains one of the most timeless experiences in the series because it’s the absolute best time capsule of a point in time the franchise has ever seen. While later games featured more intricate stories and finer-tuned gameplay, nothing has topped Vice City as far as being a perfect representation of the era it’s set in. Those wanting to play it on PC can do so via Steam, with wonky controller support and a redone OST that’s more in line with the mobile port. I would say that the mobile version via a Fire TV or Android TV device with Bluetooth controller support is solid enough — and a great value overall — but doesn’t top the original Xbox version if you have either an OG Xbox or a 360, as that looks great and still keeps a modern control scheme intact.