Dragon Quest, or Dragon Warrior as it used to be known in the States, unceremoniously vanished after Dragon Warrior IV was released to little to no fanfare on the NES in 1992. Across the world in Japan the series continued to thrive, with subsequent sequels appearing on the Super Famicon while us Americans were oblivious to the Zenithian trilogy continuing on in 16-bit glory. Dragon Quest entered our consciousness when Dragon Quest VII was released in Japan in the year 2000, but it didn’t make its appearance to us western gamers until approximately 14 months later when it was released on PlayStation, with the appropriate American rebranding as Dragon Warrior VII.

Dragon Warrior VII is a little strange as a far as Dragon Warrior titles go. In previous Dragon Warrior titles the world was always there from the start of the game. Parts of it were inaccessible and there may have been an underworld to discover later, but vast continents were there waiting to be explored. In this game there’s only the island of Estard from which the hero and his friends hail. There’s a special Fane in Estard where the hero can place shards, and once all the corresponding shards are placed, there the hero travels back in time to a new area. Once the hero resolves whatever issue is taking place in the past he can return to the present and the location he visited in the past has been restored in the present, making the world grow as the game progresses.

The story begins when the hero’s father brings home an old map fragment that suggests the world was once populated with many more islands than Estard. The hero and his friend Maribel, who happens to be the mayor’s daughter and general priss, go exploring town until they eventually stumble upon Estard’s Fane and travel back in time. The two are naturally confused as to where they went and have trouble grasping that they’ve traveled through time and brought a lost civilization back to the present, but they get over it soon and go about traveling to lost societies as if it were nothing and bringing the world back to being a much larger and diverse place. 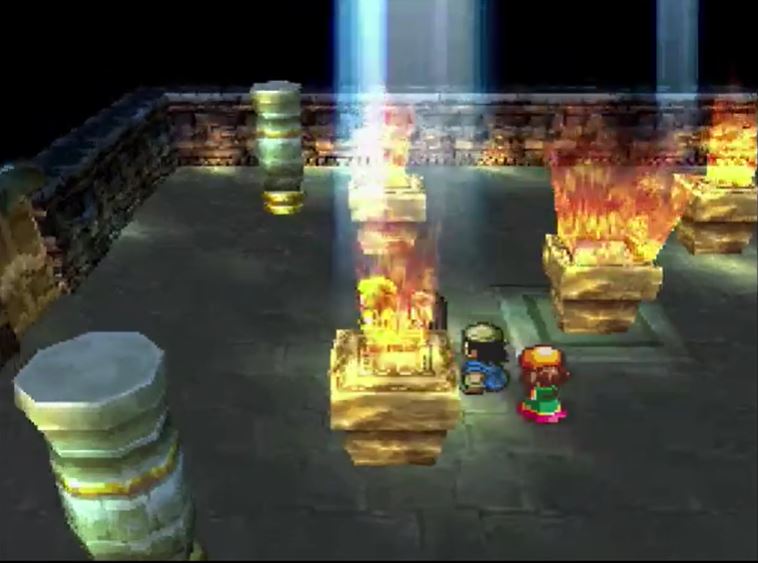 As the adventure unfolds the hero’s party continues to grow as it does in Dragon Warrior games. The hero’s other childhood friend and prince of Estard Kiefer joins him and works well as a traditional warrior class. There’s Gabo, a white wolf pup who somehow turned into a boy, but his feral qualities prove to be useful in battle. Melvin was a great warrior who actually fought alongside God long ago before he was turned to stone to preserve him in case the day comes where he ever needs to take up arms again, and while he’s both a proficient warrior and magician his true strength lies in magic. Lastly there’s Aira, the ritual dancer of the Deja tribe. Similar to Melvin, she is a powerful warrior and spellcaster but her physical prowess on the battlefield exceeds her magic capabilities.

Characters in Dragon Warrior VII stop learning character specific abilities around level 15 which should be about the time the player reaches Dharma. This is where the game begins using a class system for characters to increase their stats among with learning spells and special abilities. The classes are divided into Basic, Intermediate and Advanced tiers. As the character masters Basic classes, certain jobs will open up in the Intermediate tier dependent on which specific Basic Jobs were mastered. After mastering Intermediate classes then Advanced classes open up. Class levels advance by number of battles fought and not through accumulating points, so there isn’t a system that can be exploited to grind out class levels quickly. In addition to these classes there are also monster classes characters can learn throughout the game. 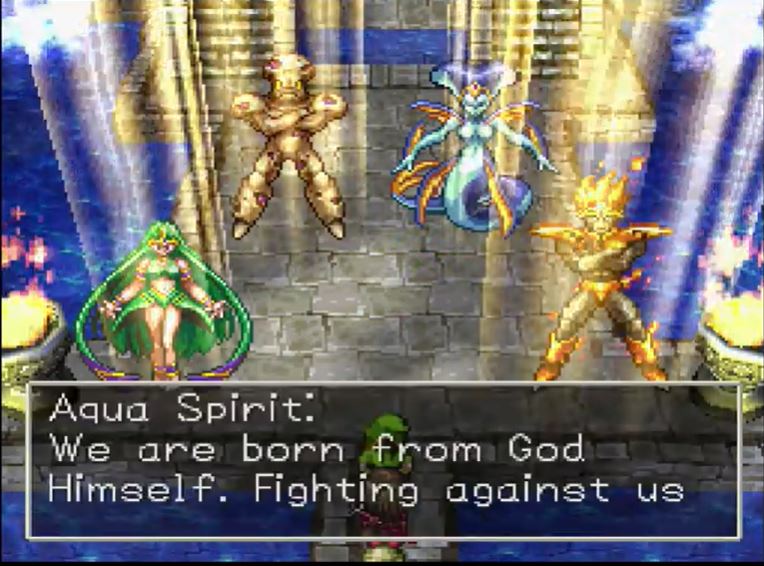 If the way the class system works sounds like a massive grind, there’s a perfectly logical explanation for that, and that explanation is that it’s a massive grind. Dragon Warrior VII may have been the biggest time sink I had ever played when it was released, and while several other games require even more time since its release, this is still a massive game. Just powering through the game quest can take over a hundred hours, and if you’re a completionist who wants to explore every side quest and master all the jobs, this can easily take hundreds of hours. Dragon Warrior VII is a great game, but this statement is made with the caveat that one is willing to deal with slow pacing and spend a lot of time. Prior to getting my hands on this title I heard that it takes approximately three hours before you encounter your first slime battle, and while I thought that was hyperbole, the three hour introduction before the first battle is all too true.

With exception to the slow pacing and grindy nature of Dragon Warrior VII, there is a great game here. Like most Dragon Warrior games the story is strong enough to maintain the player’s interest, and while it is a game that deals with slaying demonic forces hellbent on world destruction, there’s an element of wholesomeness and childlike wonder to each of these games. There are a few fun side activities to enjoy, such as bringing new citizens to the Immigrant Town to watch it grow and develop like a more intimate version of what the hero is doing to the world at large, and there’s always the casino to scratch that gambling itch. There are continents to bring back to the world and a Demon Lord that eventually needs to be defeated, but there are plenty of ways to enjoy the hundred plus hour game. 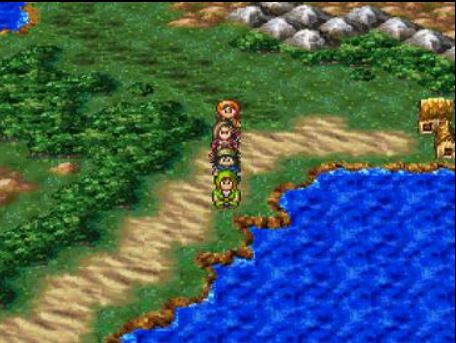 Dragon Warrior VII was an enormous success in Japan but initially didn’t do too well over here. Dragon Warrior never just got as popular Stateside as it did in Japan, and in addition to the time issues mentioned, the release date didn’t exactly help matters. The graphics for Dragon Warrior VII were mediocre at best on PlayStation, and coming out after the launch of PlayStation 2 made them look that much worse. While jumping from three to seven did wonders for Final Fantasy, skipping a few entries to seven didn’t have the same boon for Dragon Warrior. Luckily, thanks to several handheld remakes the Dragon Quest brand has enjoyed an increase in popularity in the western world. Dragon Warrior VII was remade for Nintendo 3DS and released in 2016 as Dragon Quest VII: Fragments of the Forgotten Past. While the script was completely rewritten and unfortunately removed some of the more risque humor, many improvements were made to the pacing, graphics and overall gameplay to make it feel more modern. Overall, the 3DS remake is the superior game and the recommended platform for people playing it for the first time now, but that being said I can’t deny that I enjoyed the hundred plus hours I spent with Dragon Warrior VII on my PlayStation.