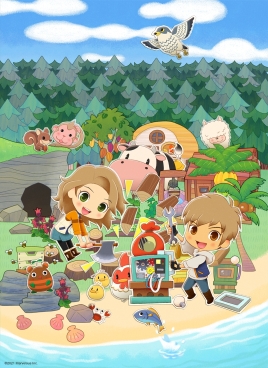 Since 2014, the Story of Seasons series has been a blend of existing Harvest Moon games rebranded and new adventures that blend farming with a life simulation — and Pioneers of Olive Town is the latest adventure in the long-running series. It was interesting to come back to it now after a year of falling back in love with life simulation/slice of life games thanks to Animal Crossing: New Horizons. There have been a ton of games like this out on the market, but most have fallen short of grabbing my attention like Olive Town has. Re:Legend was one such game, but failed to mix combat with a life sim in a way that made it fun to stick with even though it made a strong first impression.

Olive Town gives players a lot to do, but breaks it down into highly-manageable chunks — making it a perfect gateway game into the farming/life simulation genre for those who haven’t played one or for lapsed fans. The town’s citizens build bonds with the player’s chosen character by offering their wares — but also their help at times. Most of the characters come across as a bit too defined by their jobs — but others, like the mechanics, stand out thanks to more modern-day attire. In that same respect, people like the grocers and hotel operators look less modern, but also work in the sense that they’re stuck in a time capsule and dress like it’s a different time.

The slice of life aspect to Story of Seasons helps it stand out from games like Animal Crossing, which do feature a veneer of that mainly put you on various quest loops. Here, there are quests to complete for various townspeople, but much of your time is spent in the game, like it is in life, with a work/life balance to try and work out day by day. The usage of a second of real-time as a minute of in-game time puts the onus on the player to be as efficient as possible with their time and players can do quite a bit with it depending on what aspect of the adventure they want to focus on. You can work on building up your farm quickly or mix in farm work with friendship-building to increase your reputation in the city. 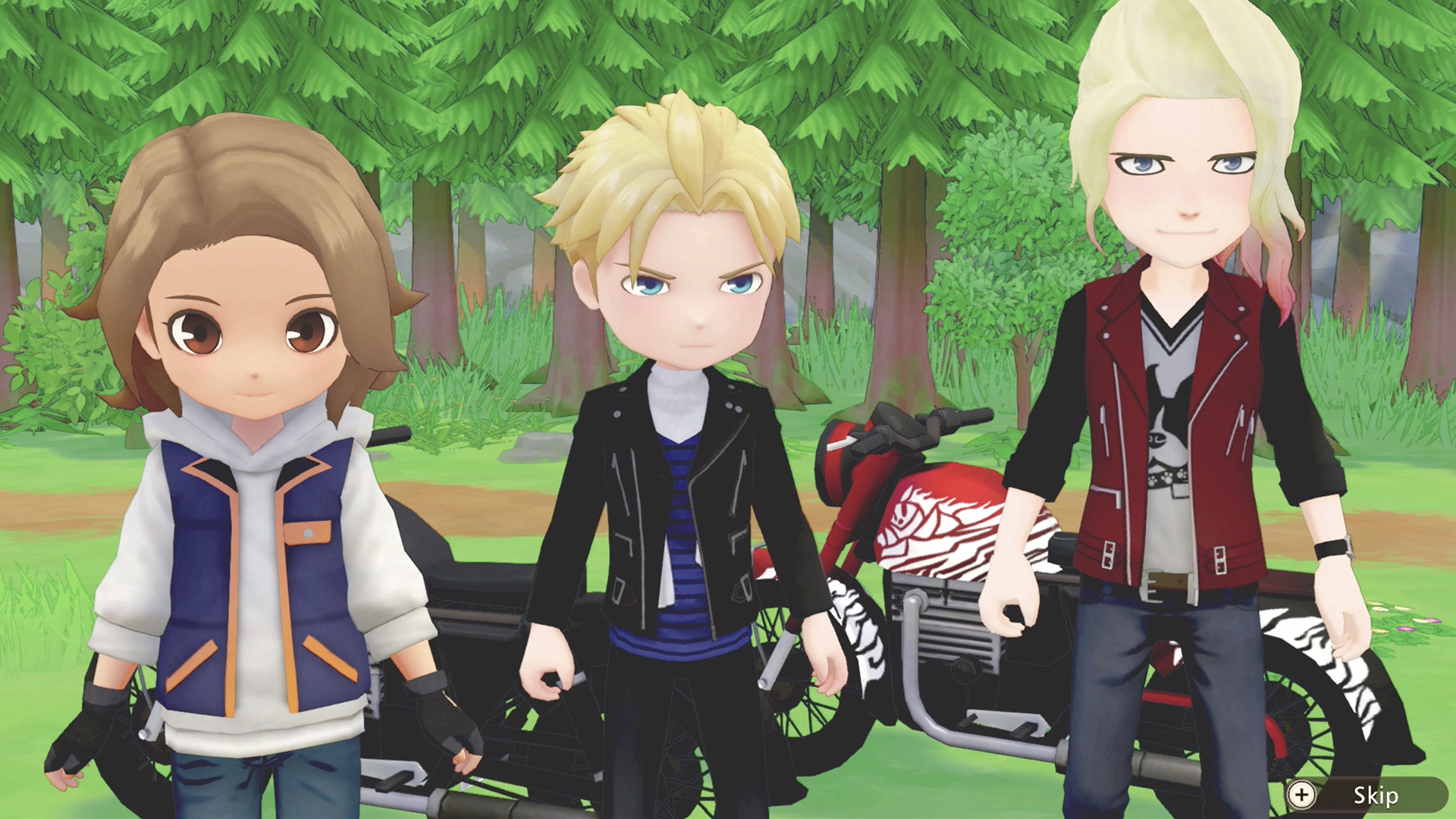 Olive Town leans heavily into early-game tutorials, which is fantastic since it ensures that you always have some idea of what to do — although the menu system can make switch between different tool bags cumbersome at times. Fortunately, in-game, your main tools and things like consumables are all easily-accessed with d-pad commands but getting things properly mapped to them can be tricky. Players have an old-school Zelda heart-based health bar and you do have to be mindful of over-exertion from working all day or else you’ll pass out. There’s no magical medicine like in Animal Crossing to help it — you just need to have three meals a day to keep your body right and blend in light, healthy snacking throughout the day.

Beyond farming tools being used to till the soil and cut down trees, hammers are used to fell giant rocks and prove to be your greatest ally when mining. Mining is something that truly helps this game stand out from the Animal Crossing series since it adds a much-appreciated action and exploration aspect to things. Mining allows players to build up their raw material count, including finding rare materials at the bottom alongside being able to use your hoe to occasionally get materials from the ground. There’s a thrill that comes from mining early in the morning and then using those materials to either improve your financial well-being by shipping them out or splitting things up into a mixture of profit and standby materials in case a request pops up from a fellow resident.

The more you mine, the riskier it gets if you don’t take a break and there’s a definite thrill from going right up to the line and maybe not avoiding the warnings you get — but not fulling heeding them and seeing just how much material you can obtain from a day filled with mining and minimal breaks. Going full-boar on mining is tough and will get in the way of building bonds with either your pets or livestock, who require regular care just like the plants do. Generally, a healthy mix of food and vegetation is sound for your farm as the former allows you to not only save on food costs in the long run, but also export that expensive food material for fantastic profits. 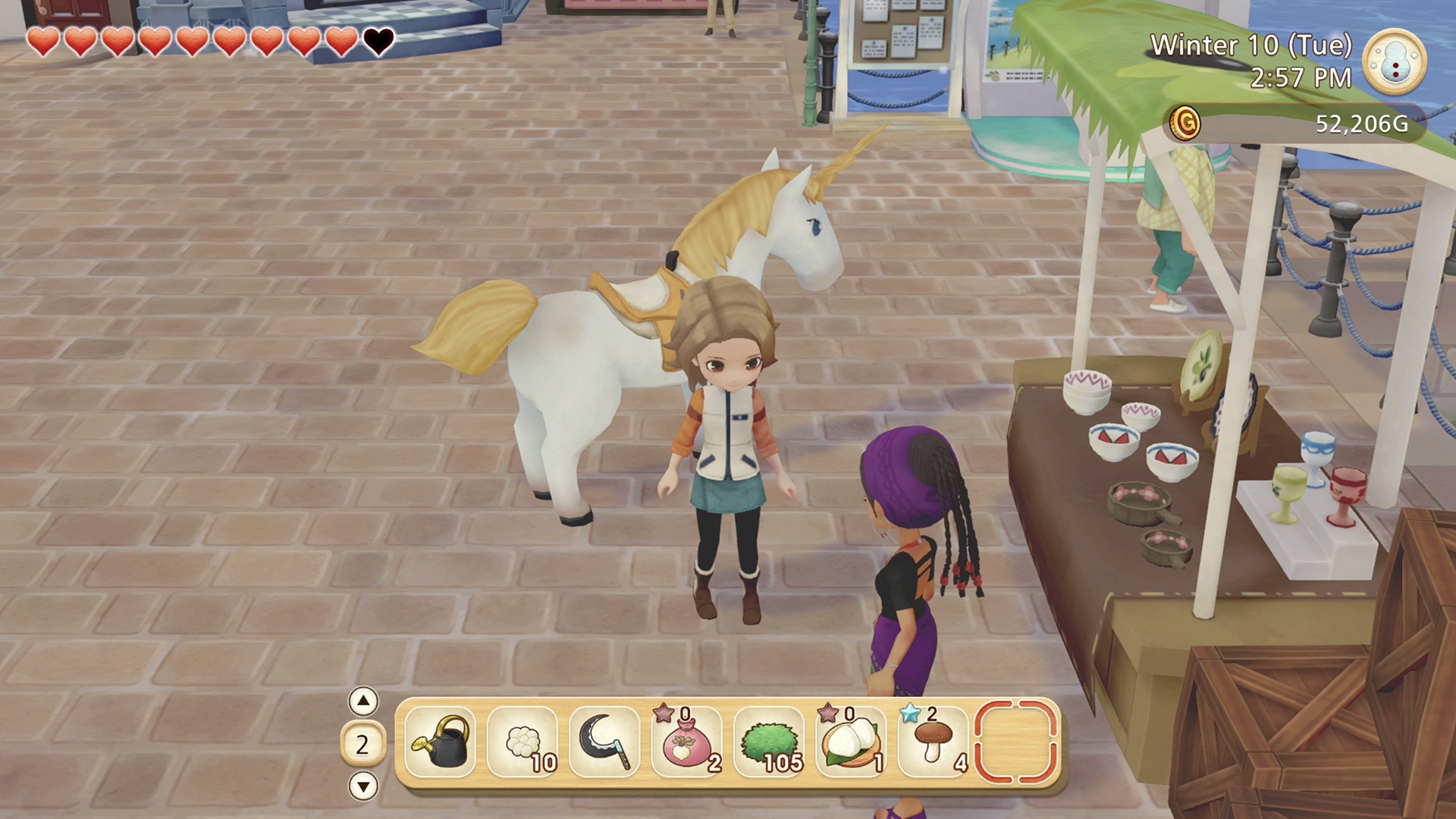 Cooking is a surprisingly fun part of the adventure and having an easily-accessible ingredient guide while looking lets you see what the best items are to either grow or buy in reasonable quantities. The more food items you buy across a variety of types, the more meals you can make and thus your cooking skills will increase quickly. This allows you to become more well-rounded and helps minimize wasted time going out to eat and also spending money quickly instead of being able to put that money back into your farm. The wide variety of gameplay options from life sim to farming with action sprinkled in help keep the game fresh as each in-game day passes and it’s hard to ever have two days work out the same way no matter what — there’s a sense of adventure here that a lot of games like this lack and it’s an addictive experience.

Olive Town’s look is just fine for its genre — but won’t wow anyone right away. The art style is reality-based with a bit of a cartoon-ish look and flair, and works nicely in stills and especially in motion. All of the animation, from moving to swinging tools and interacting with townspeople, looks fine even with some oddities in the mix. All meals eaten out, for example, will be the same generic meal visually no matter what you choose to eat. Characters also hand things to one another without actually moving the items, so you just wind up with players moving invisible items back and forth in another visual oddity. Still, the game may lack some flair but does impress in both docked and portable mode with solid framerates at all times.

The soundtrack is relaxing and keeps the mood light while also featuring fun, happy sound effects that make completing small tasks feel more like an accomplishment. It feels great to tend to your land thanks to the sound design with the sound effects change up depending on what you hit with what item — so you’ll hear a hammer differently depending on if you’re using it for smashing rocks versus if you’re using it to grab ore from the mine’s walls. The soundtrack’s laid-back nature makes exploring mines that much more fun since it shifts to be more ominous — kind of like how Super Mario Bros. got more intense just due to the soundtrack getting punched up for underground stages. 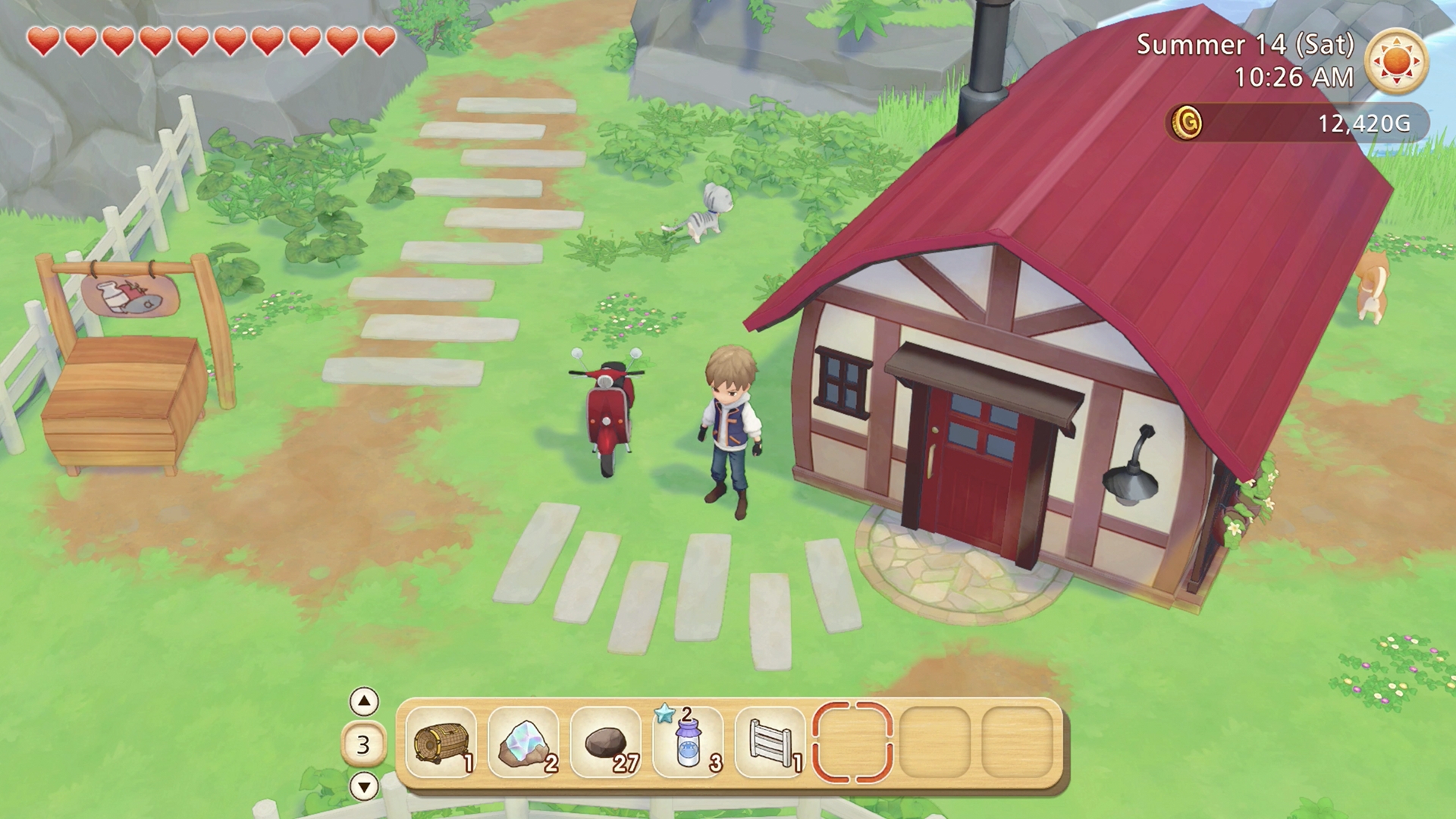 What it lacks in technical prowess, Story of Seasons: Pioneers of Olive Town more than makes up for in sheer fun. The gameplay loop of farm management alongside more active roles such as mining and gathering materials makes the day-to-day adventure a lot of fun, while building up bonds with the townspeople feels like an accomplishment. Anyone looking for a more action-filled life simulation will feel right at home with Story of Seasons: Pioneers of Olive Town, and it’s also perfect for any lapsed fans of the genre. Players are guided along nicely, but still given tremendous freedom to make their adventure their own.