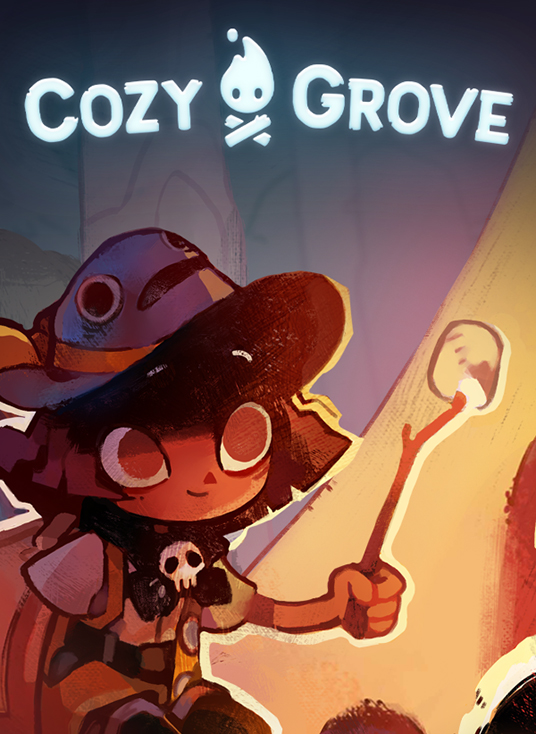 As a general rule scouting isn’t so much a way of life as it is a thing you do when you’re young. Some kids go all-in, sure, but generally it’s a nice way to hang with other kids and pick up some new skills while trying to just smile and nod to the adults who take it a bit too seriously.  Boy Scouts, Girl Scouts, Junior Woodchucks, whatever; it’s a nice organized activity that lets you try a whole pile of new things with a focus on the great outdoors.  Spirit Scouts aren’t much different, except in addition to all the usual arts and crafts they also deal with ghosts.  It’s important to handle restless spirits with understanding and a willingness to help in order to settle them down, and like any learned skill there are tests involved.  For the Spirit Scouts this means sending their members off alone to a lightly-haunted island for a few days, just to see how they handle things.

The island of Cozy Grove is not, by any means, a lightly haunted one.  As it turns out, the scout of Cozy Grove should have gone to Cozy Cove, but seeing as the boat washed out to sea shortly after arrival there’s not a lot of choice but to settle in and explore.  Thankfully they didn’t arrive completely alone, but rather have a spirit-sensitive sentient campfire along for the journey.  The scout lives their life on the island while looking after the spirits, while Flamey takes care of the camp site and toasts any items in need of a good burning.  Between the two of them, the spirits of Cozy Grove may finally be able to complete their stories.

Cozy Grove is a charming, low-key Animal Crossing-style life sim, where you move to a new area and slowly over time build it up into a new home.  The ghostly tone sounds like it could be spooky, but the spirits are all friendly bears who are ready to talk to anyone who will listen.  Each bear-spirit had a role in life that they keep on performing now that it’s over, such as mail delivery, crafting, cooking, mayor, etc.  The spirits can only do so much, though, and need the help of the living to run any number of errands.  Each successful task fills up a little bit more of the spirit’s heart meter and may just earn a spirit log. 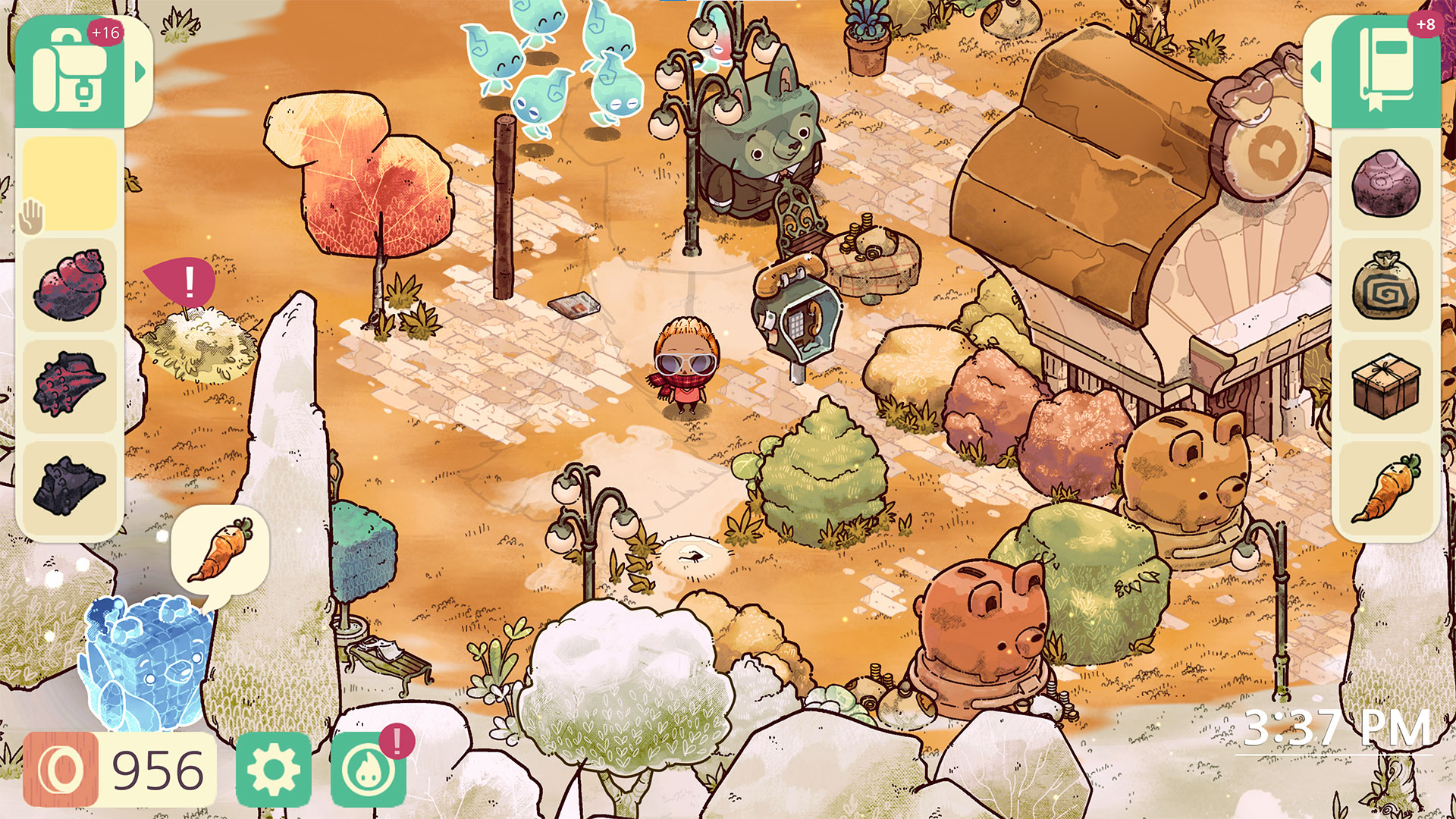 At the start the island is small, easily run across in almost no time at all.  Running an errand for the ranger bear, Charlotte Pine, earns a spirit log as reward, and feeding it to Flamey sees the campfire roar to life with blue flames as it grows strong enough to find a new lost soul.  Each new ghost also comes with a chunk of land, and the tiny little island getting gradually grows bigger and more filled with things to chase after.  Most of the friendly bear-ghosts add a new activity, such as fishing, but they have to be earned by helping out.  Sometimes this is nothing more complicated than running about the island finding a missing item, while other quests can take days.

One of the major points to take into consideration with Cozy Grove is that it’s not a game designed to obsess over in marathon sittings.  Each day’s activities are about 30-45 minutes long, and you’re meant to to come back day after day to do what you can as the story slowly progresses.  For the most part this is a system that gives Cozy Grove a lovely slow-paced feel, where it becomes a nice habit to check in and see what’s new, but sometimes its systems can trip over each other as well.  In one particular case, in a quest I’m still working on (This is a game designed to be played over months so I’m going to have to say here I’m nowhere near completing it, with two weeks being not being near enough time to unlock everything) the seagull-bear ghost Captain Billweather Snout requested a Tea Egg, which you make at chef Allison Fisher’s kitchen. The problem was that the kitchen wasn’t open yet and Allison’s quest to unlock it would take a week to complete.  She needed a certain number of greens and the store only sells one a day.  That’s OK, patience and the daily check-in is what Cozy Grove is all about, so a little waiting is no big deal.  The bit where it started to fall apart was finding out the Tea Egg needs the component Boiled Egg to make, and that takes ten regular eggs to cook up.  Which the store sells at the rate of one a day.  So that comes to six days to unlock the kitchen, none of which were spent also buying an egg a day because I had no way to know yet that was a requirement, plus another ten days to buy enough eggs to complete the Captain’s request.  There’s a difference between patience and waiting forever, and this particular quest fell on the wrong side. 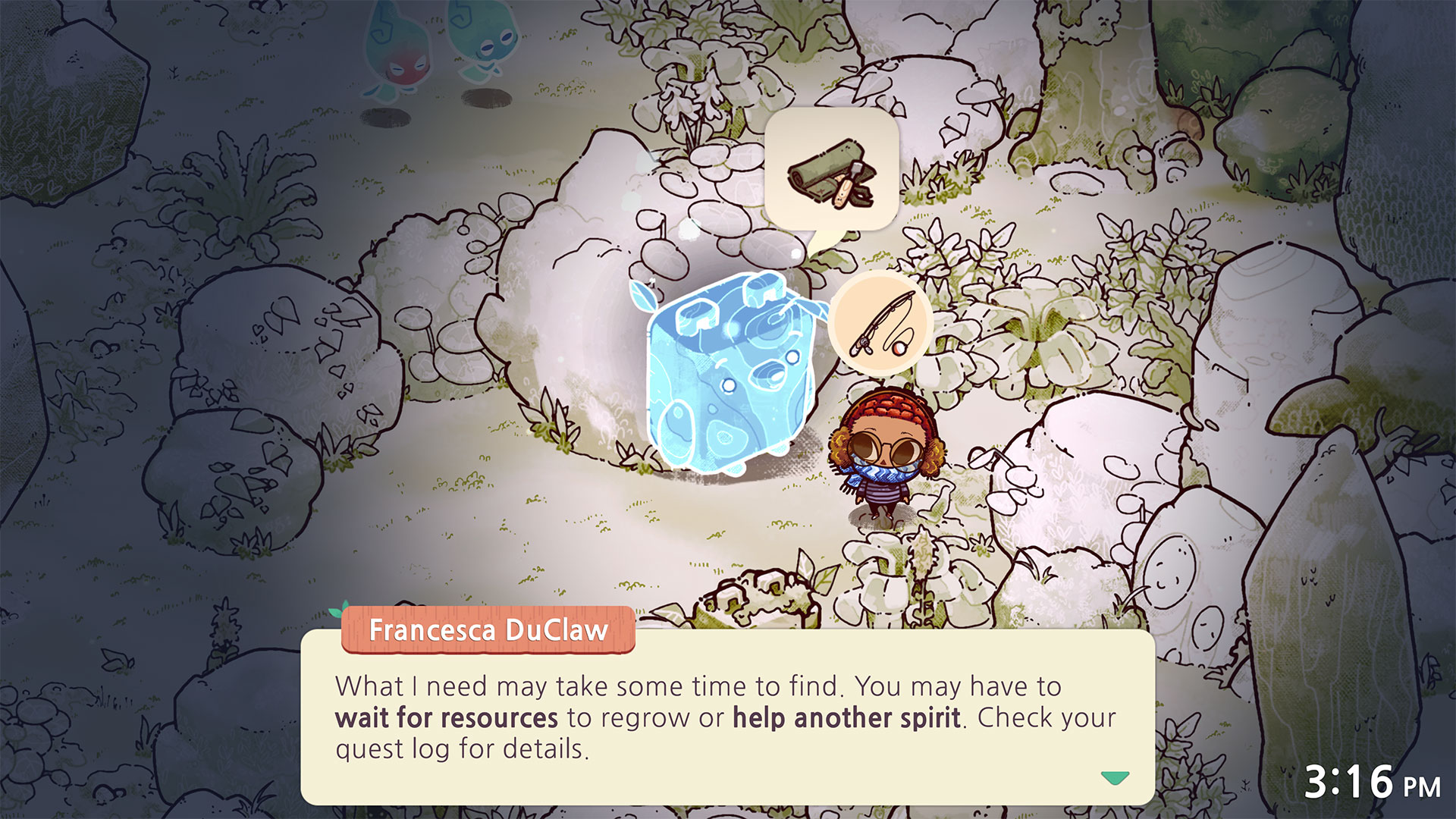 Most requests are much more straightforward, thankfully.  Chase around the island to find some packages, catch a certain number of fish, etc.  In addition to the regular bears’ requests there are also imps on the island, most of which dissipate in a specterly fashion when you get to close but some of which have a word balloon with an icon showing they need something.  You can’t hand it to them because then they disappear, but tossing it their way from a distance works nicely.  Once they’ve got what they need the word bubble turns into a heart, at which point you can walk up to them to claim a reward, which is usually a spirit stone of some sort.  Other resources are just lying there waiting to harvest, buried in leaf piles and mounds of dirt, growing from fruit and nut trees, and the previously-mentioned fish that will nibble at any cast sent their way.

This is where the life-sim aspect of Cozy Grove comes in, because few quests are timed and even the ones that are have a generous window to complete them in.  All that time can be used for whatever you’d like, whether that be gathering resources, crafting them into sellable items, hunting the daily relic, decorating the island or collecting all the best outfits.  There are a couple of upgrade paths to save towards, earning both a better campsite that can hold more resources in storage or a better store that stocks more goods in a broader variety, and crafting a few higher-end food items just in case they’re needed later is never a bad idea either.  While the bears’ quests give Cozy Grove its structure, there’s a lot to do outside of them with more activities showing up as each new ghost is discovered. 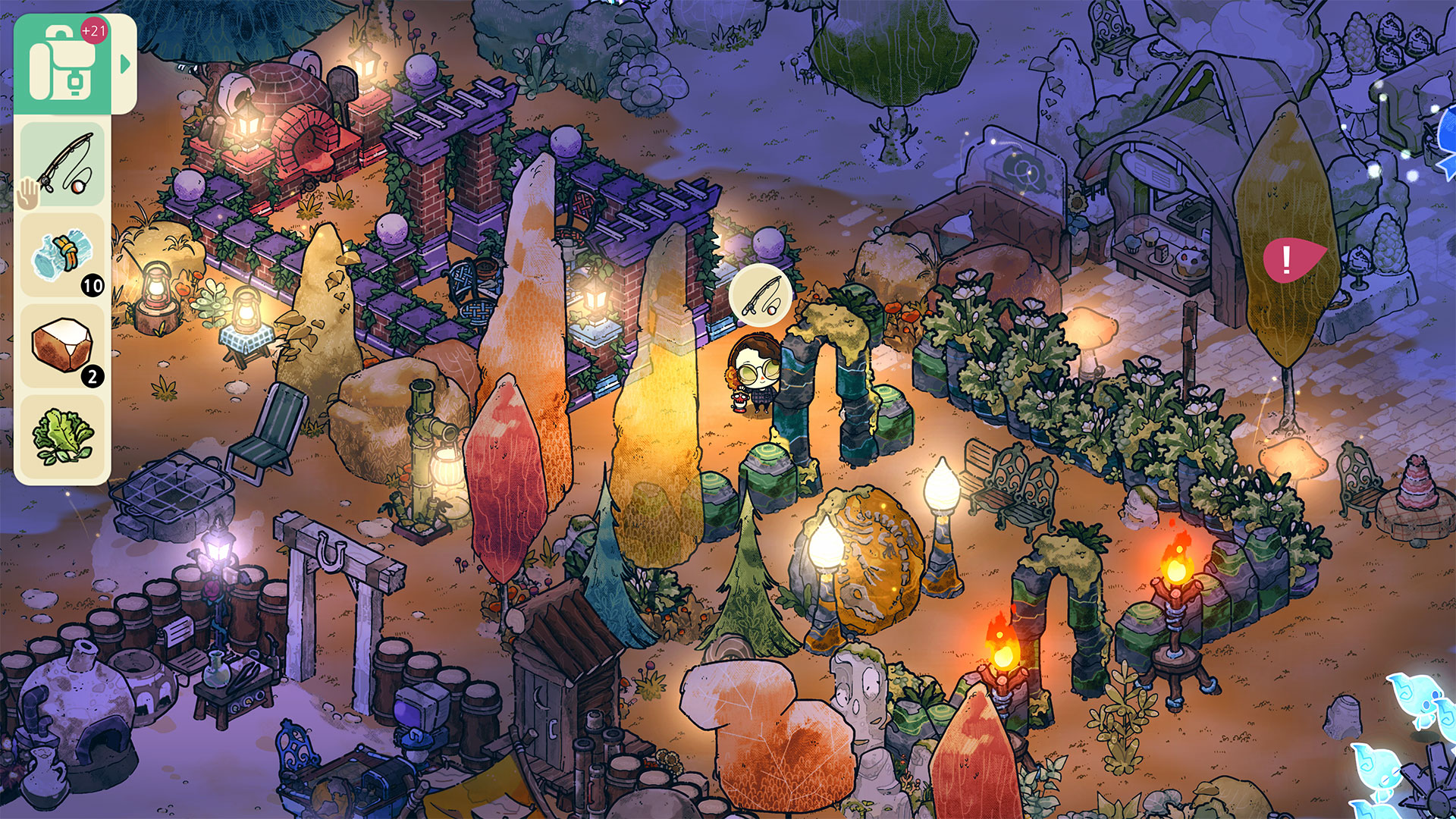 Cozy Grove is a wonderful, loveable, colorful take and the life-sim genre, with a huge amount to discover spread out over a long period of play.  The detailed hand-drawn art gives the game an inviting look, and the use of color to indicate a satisfied bear-ghost or one in need of assistance is a great way to show off the linework.  The story progression can require a certain level of patience, but everything is tied in to the idea of Cozy Grove being not just a game but a daily habit, a nice place to visit when you’ve got a few minutes to spare.  Whether you focus on story, decorating the island, collecting everything that isn’t nailed down, or some combination of the above, there’s a lot to do on the island of Cozy Grove and all the time needed to get it done.  The long passage of time is more a concern for the living than the dead, and hanging out with the ghosts of Cozy Grove is a lovely, chill way to unwind for a few minutes as one day flows into another.