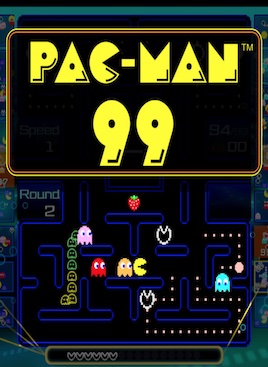 If there’s one thing Nintendo is consistently good at, it’s giving people not what they want, but what they didn’t think they wanted. A little over two years ago now, perhaps one of the most bizarre cross-over of ideas materialized in the form of Tetris 99. A 99-player Battle Royale spin on one of video games’ most beloved and timeless brands. Though the surprise of its existence was immeasurable, it was the brilliance of its implementation that was the biggest shock. By far the most unusual spin on the craze since its explosion into mainstream popularity around 2017, Tetris 99 was not only Nintendo’s eventual foray into what was the latest, contemporary craze, it was an ingenious one on top. An iteration on the classic block-falling formula that for all its hyper-competitive emergence retained the essence of what makes Tetris so addictive still these many decades on.

Fast-forward to now and once more, the Big N has found itself startling many of us with an equally out-of-nowhere announcement. One that showed that it wasn’t just Tetris — and indeed, the company’s own mascot — that would be getting the “99” treatment. Enter Pac-Man 99; Bandai Namco’s famed, yellow consumer of pellets and multi-colored ghosts alike. A game that too released the same day of its announcement, available as a (in Nintendo’s own manner of wording) “free to try” stand-alone mode competing online with 98 fellow players for Nintendo Switch Online subscribers — a paid bundle available alongside for those who may feel unsatisfied with the singular, but admittedly still-compelling prospect of going at it against 98 fellow players over and over again.

For all its similarities with its presentation and slightly-unaltered menu layouts — clearly attempting to both evoke and replicate the success of its block-falling brethren — Pac-Man 99 is a touch more on the accessible side than either of Nintendo’s other two efforts in the past couple of years. That’s not to say that Pac-Man 99 can’t, at the best/worst times, boil down to a white hot stroke of absolute, unflinching concentration during its Final 10 climax. If anything, it can often feel as if that eventual one-on-one between yourself and the last survivor runs for an eternity. Neither one of you ushering a simple mistake. Neither is it the case that there aren’t some neat, meta-level little strategies to discover and dig through as each game evolves and increases with stakes. But given the evident differences in mechanics between Tetris and Pac-Man, it’s the latter that seems more manageable so far as compensating for that inevitable slip up or two. Where Tetris’ block-building, risk-heavy manner of striving for an ideal four-line clear was so easy to have countered by built-up junk lines, the only real threat players must consider with Pac-Man 99 is how well they can react to and out-maneuver the clutter of their board. 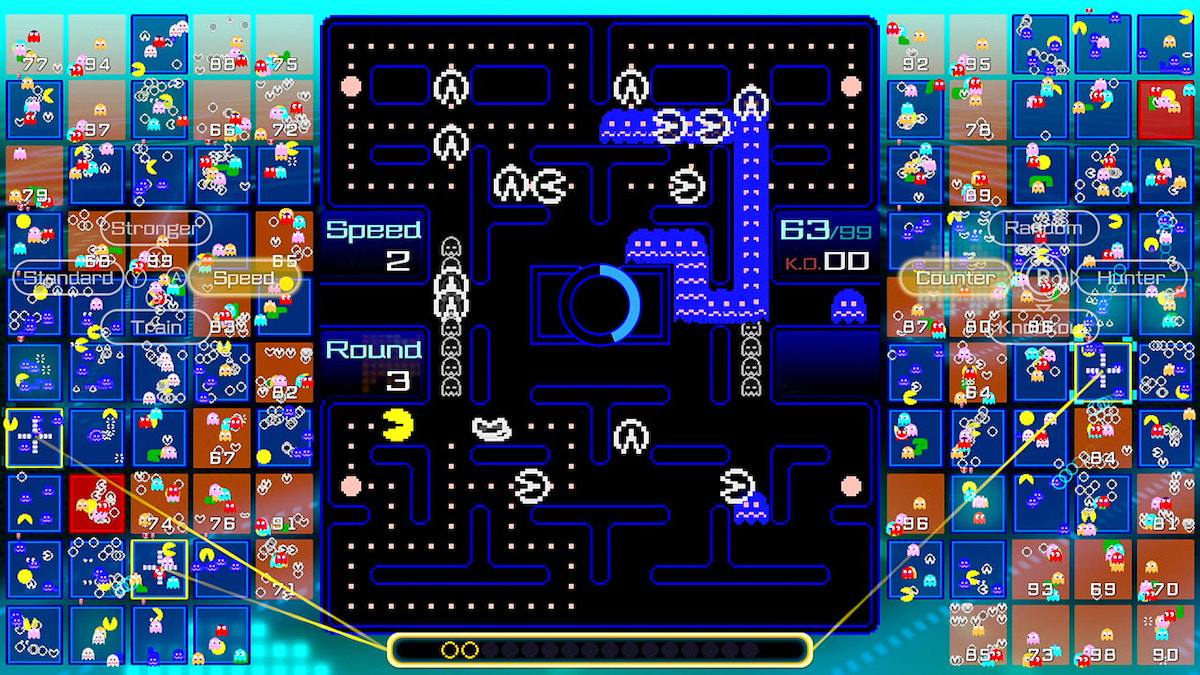 In that respect, Pac-Man 99 thankfully feels less influenced by blind luck here and defined more so by what players make of the situation. Not that that was heavily damaging to Tetris 99, but it could on occasion seem that fate wasn’t always in one’s hands. Less a consequence of the “anyone can win” mentality and more, sadly, the reality that not everything taking place was open for preparation. That’s not the case with Pac-Man 99 and part of that success lies once more in its ability to translate the single-player, arcade-styled, high score-climbing experience onto a multiplayer format. This is still traditional, original Pac-Man incarnate — colored ghosts and all — and the great thing is that it feels like a lone, single-player template. Just like the regular objective of Pac-Man, each round of Pac-Man 99 primarily revolves around taking out as many ghosts as possible. Each ghost sending a Jammer Pac-Man to the board of a targeted player. Like Tetris 99, players have four categories to choose from on whom they want to target. Randoms, those close to being knocked-out, a counter effort to those targeting yourself and those whom are maybe doing too well at present.

Sadly, Pac-Man 99 neither explains nor properly provides any form of tutorial as to how any of these methods function, leaving players to naturally experiment and learn via trial-and-error. The same applies to the additional power-ups one can acquire when coming into contact with a power-up. A disappointing sight to see, given it was one of the few blemishes of Tetris 99 and like a lot of the game’s appearance, it’s an aspect that looks to have carried over. Even so, it’s incredible just how deep and strategically varied any one round of Pac-Man 99 can get. Deciding if and/or when to clear a board of pellets so as to gain that bonus speed-up to one’s movement. Extending a ghost’s trail so that more Jammer Pac-Man are hurled back at other players. Knowing when to reach for the bonus fruit, which causes the board to reset with its original four power pallets and a random assortment of regular pellets to, again, consider worthy of being picked up. It’s akin to the mentality and split-second decision-making that goes on in any regular game of Pac-Man and that’s the genius of Pac-Man 99 specifically. That of the three “99”-styled entries, this is the one that best disguises the rampant, chaotic activity of its competitive multiplayer structure. 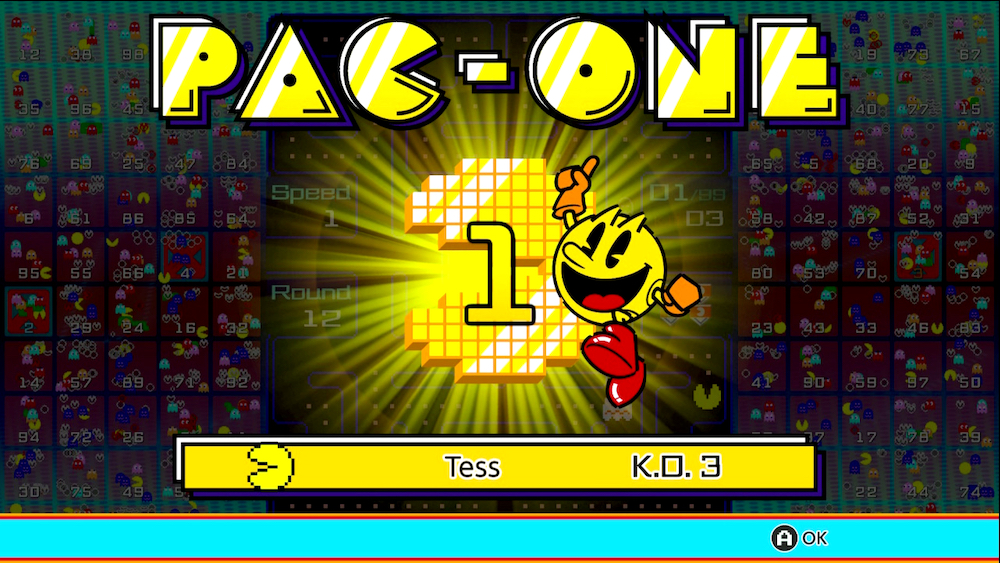 But as noted, this in no way signals the game as a more breezier or light-hearted approach to Battle Royale antics. Players who aren’t paying close attention to the positioning of ghosts and Jammer Pac-Man are sure to get caught out easily here. At its most extreme moments, you’re often having to focus on four (maybe even five) individual elements at one time. All of which alone have the potential to ruin your good fortune and if not taken into consideration early on, can add up to some truly disastrous and regretful mistakes during the Final 10 phase. But unlike Tetris 99, managing what’s happening on-screen isn’t down to who yields the quickest reflexes or perhaps has the most experience with utilizing something like a T-Spin. Pac-Man 99‘s quintessentially-Pac Man gameplay means that the only real extreme measure of ability asked of a player is in thinking long-term.

On knowing which Power Pellets to go for, when to go for them; knowing not to rely too heavily on the assumption of bonus fruit popping up to save the day. What’s more, in the final phases during which Jammer Pac-Man can emerge as red — meaning simply touching them will kill you — manipulating these obstructions so that they don’t block a vital path on the board. Each round — usually lasting around five to ten minutes and so effortlessly transitioning to a new round upon one’s untimely demise — remains brilliantly emergent with all the many sound decisions one has to make. Decisions that initially may not be ideal, but thankfully don’t come across as too costly in the context of how an entire round can play out. And part of that cleverly-disguised revelation is in how well implemented Pac-Man 99‘s new tricks and traps are amidst the vintage stylings of its game board. Mechanics that, annoying as they may be in early parts, take little time to adapt to. Eventually paving one’s way to eventual victory that, personally, feels much more reachable than that of Tetris 99, but in no way sacrificing that same scale of challenge or difficulty it takes to survive the many threats flung your way. 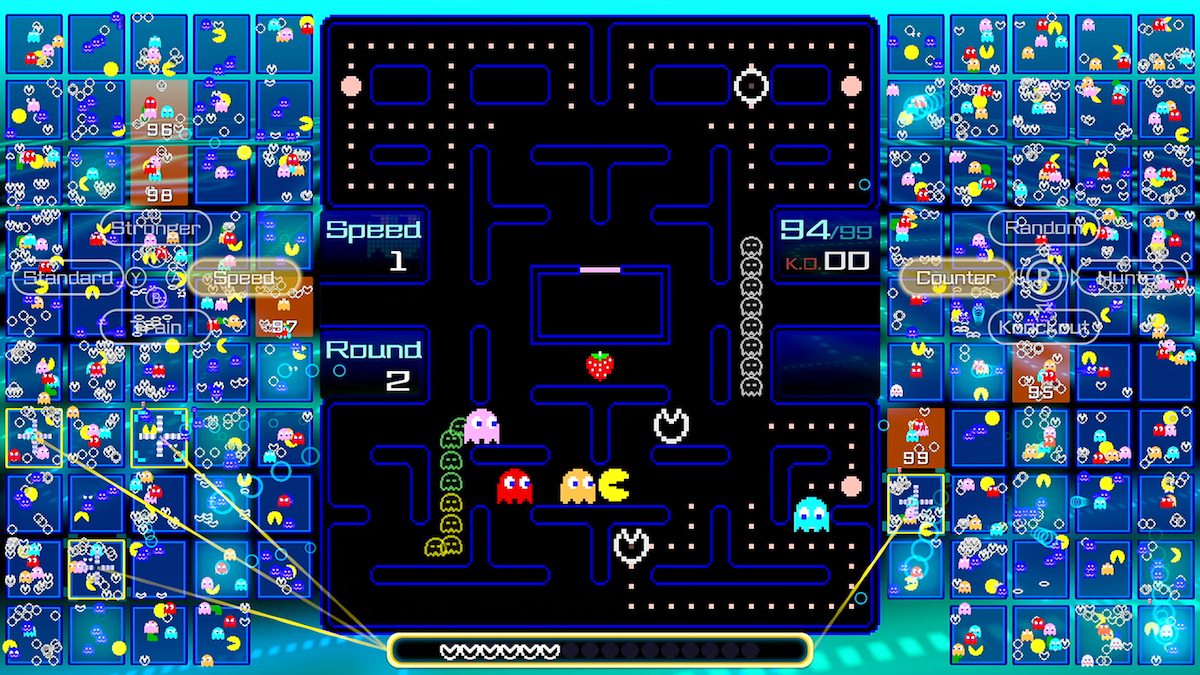 The bloodshot, eye-widening surprise may not be as extreme here, but Pac-Man 99 is just as tense a competitive prospect its Tetris counterpart was in 2019. Though what Bandai Namco’s mascot may in fact hold an advantage in is the more convincing argument that, indeed, any one of the 99 players per round can realistically win. It’s that ease of accessibility, whilst still requiring players to step up to the mark so far as crucial decision-making goes, where the “one more round” addiction is sure to take hold. If nothing else, Pac-Man 99 does it best at providing that novel facade of still being a single-player, score-racking iteration…stretched out across a broader, multiplayer canvas. Most, if not all, of the timeless joys of the original Pac-Man are here to indulge in and frustrate one’s self over in equal parts. And with a slew of new mechanics and strategic forks in the road thrown into the mix, Pac-Man 99 is another resounding success at converting a timeless classic into a stressful-but-exciting multiplayer outing.