While rare, there’s a point in some games where it switches from “Play more!” to ” I’m out.” Sometimes it’s a boss encounter that’s just balanced wrong or maybe a level that requires a new play mechanic simply doesn’t fit with the rest of the game.  In a more narrative-based game it might even be a plot twist that probably sounded better in the author’s head than on the digital page.  Nigate Tale is an action-roguelike with a focus on monster girls for its power-up mechanics, and while it’s not a top-tier example of the genre, it still manages to be a great time thanks to some creative abilities that nicely stack together, requiring only a bit of luck and strategy in choosing its perks to create a powerful build.  It’s also just released into Early Access with a roadmap that includes adding more monster girls, which will lead to even more abilities and interesting choices in each run’s setup.  There’s a lot of fun to be had in its colorful dungeons fighting the castle’s aggressive goblin-staff, but for me at least there’s a major “I’m out” moment that completely ruins Nigate Tale.  I don’t have a lot of “Thou shalt not…”s in gaming, but hypersexualizing a girl whose character design puts her in the 13-14 year old range is right at the top.

Ignoring all that for a bit and to give the gaming side its due, Nigate Tale starts out with the typical underpowered hero making his way into a dungeon he’s just not yet prepared for.  In this case it’s the engineer Roy who’s crashed into a castle of magic, as opposed to the more steampunk-like world he’s from.  A friendly maid/octopus-girl helps Roy get up to speed on his current predicament, which is that he’s stuck in the basement of a goblin-infested castle with the pieces to his helicopter scattered all over the landscape.  This, of course, means he needs to venture onto the castle grounds to retrieve everything, fighting the goblins every room of the way. 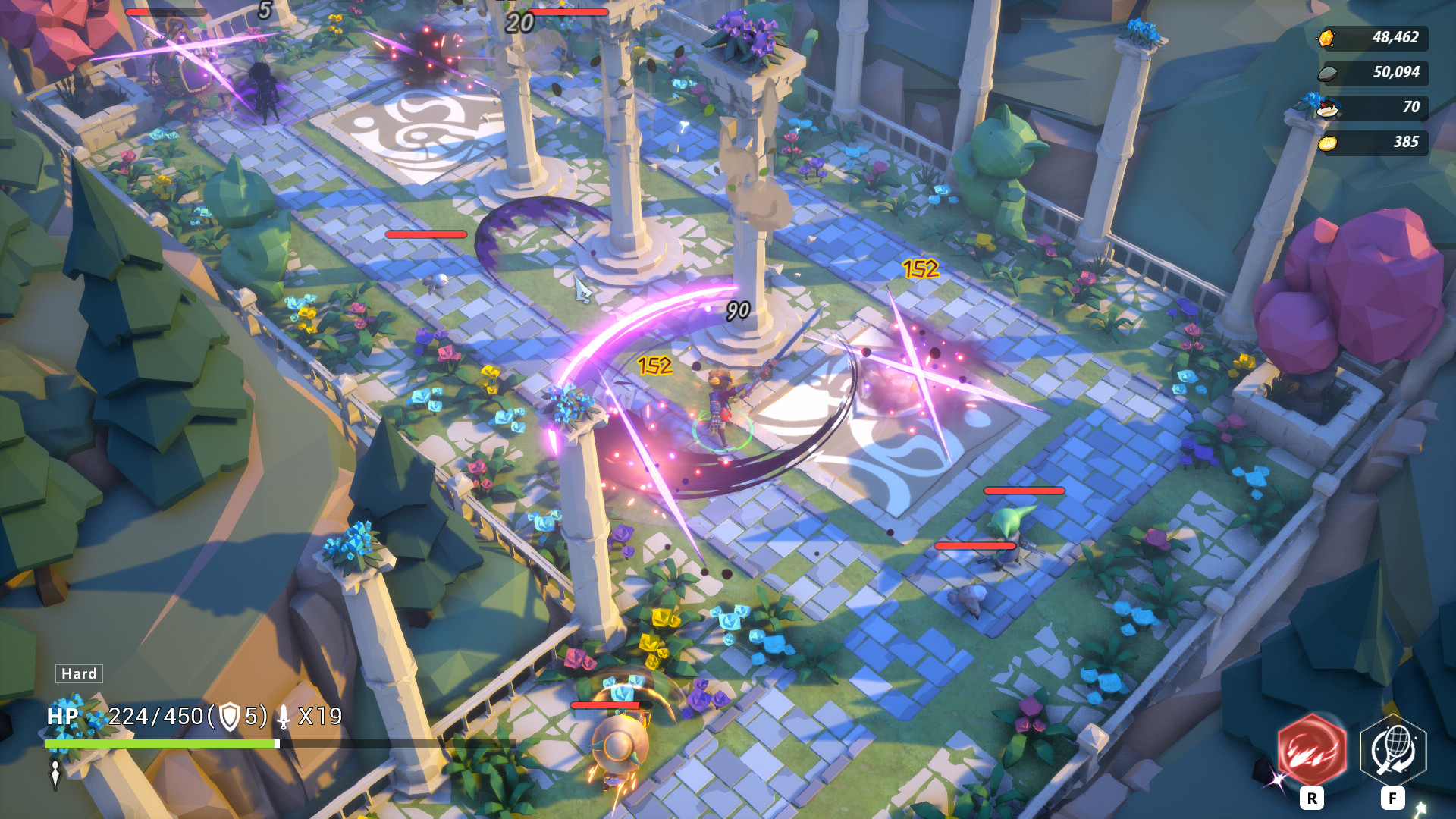 Combat is quick and reactive, with the goblins initially starting out with spearmen and gunners and quickly adding more dangerous types as Roy progresses.  Roy is armed with melee and ranged primary weapons plus a special ability, and the initial loadout is capable even before any upgrading. The wrench has a good multi-hit combo, the bow is great for sniping and the special ability is a laser-ball that slowly spins in place for several seconds.  Topping off the basics is Roy’s dodge ability, which doesn’t have any invincibility frames but still does great work at avoiding damage.  All of this and more can be upgraded in a number of ways, and this is where the monster girls come in.

Initially the only monster girl available is the maid Mayonna, who specializes in ice magic, but she’s quickly joined by fire-based salamander girl Aona, the arrow-magic of centaur Asa, gold-based catgirl Rothschild, shadow-lizard Circe, and finally blood magic demon-girl Dorothy.  The character list has four silhouettes for other monster girls who will be added later, but the current cast of six already has a good number of interesting upgrades available. 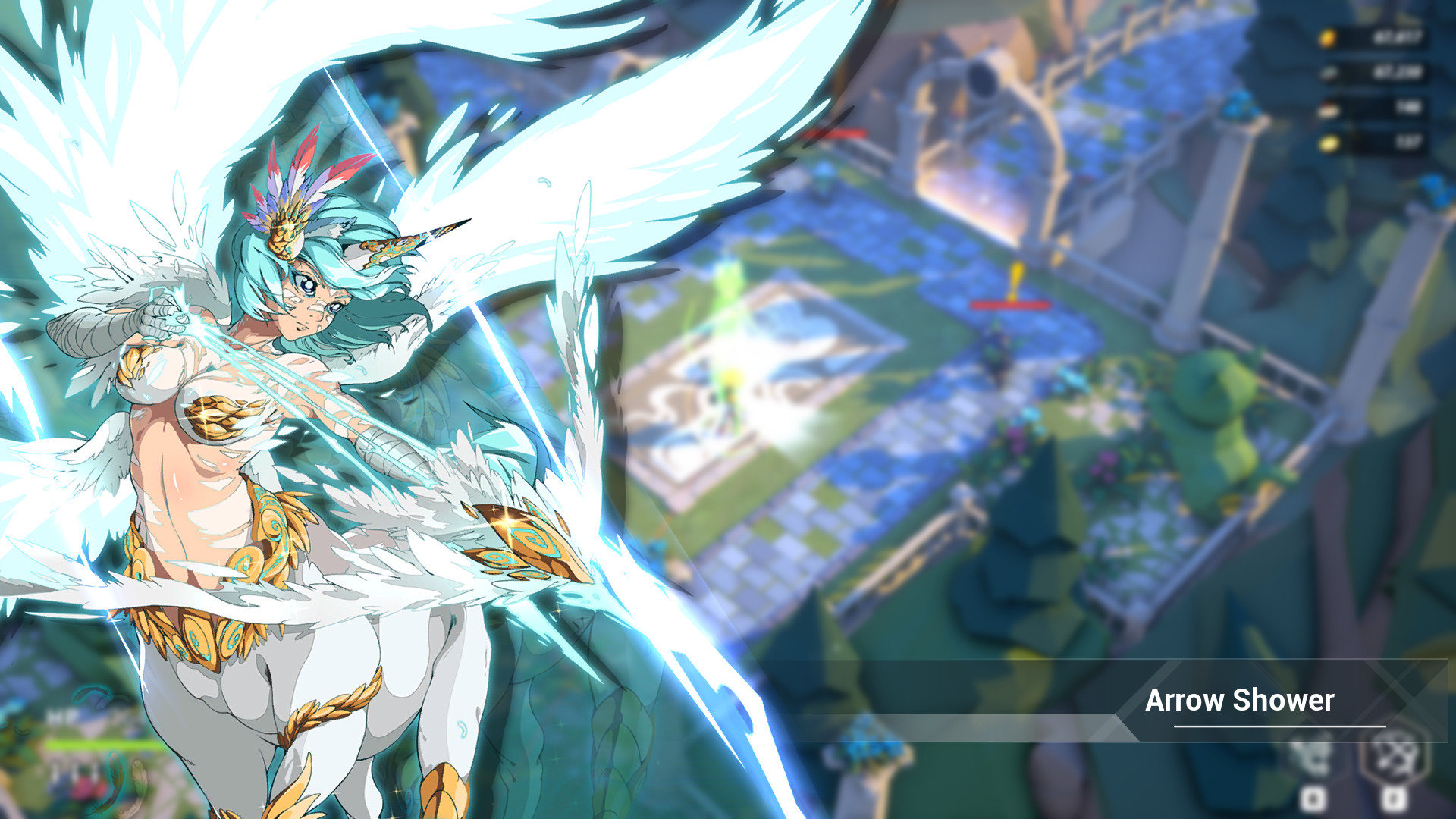 The way the powerups work is that most rooms in the dungeon, once cleared of enemies, have a symbol over the door indicating what kind of reward the next room will grant.  Each of the monster girls has her own symbol, as do other upgrades like meteor fragments to craft new weapons, crystals to buy permanent character upgrades, and even cake to use as a gift to upgrade the girls’ affinity towards Roy.  Once all the enemies are cleared from a room the reward appears, and if you chose a monster girl upgrade it comes in the form of a present with three options to pick from inside.  The monster girl blessings, as the game refers to them, add their element to Roy’s standard abilities, whether that be melee, ranged, special attack or dodge roll.  Ice may be a standard elemental ability, but a dodge roll that throws off a burst of cold that guarantees damage plus has a chance of freezing enemies solid within its area of effect is a nice perk.  The upgrades come in varying quality from weak Standard up to top-tier Legendary, with the difference generally being how much damage they do at the start.  One of the room types is marked with a clover, though, and this reward lets you level up one skill to be more effective.

The actual fighting is also good fun, requiring a constant switch between the various abilities while dodge-rolling like mad across the arena.  The types of power-ups you choose along the way define the combat style for each run, and this can also change depending on what you might pick up next.  One run might be built around arrows, for example, with the shadow-girl Circe granting two clones for that type of attack plus another powerup giving chain-attacks, where each arrow bounces to another two enemies before stopping.  Alternately the sword might be the way to go, with each strike also granting a strong arrow-hit from the centaur Asa, and made all the more powerful after finding a wave attack that travels across the screen ignoring walls.  Nigate Tale is more than happy to temporarily overpower the player, but the rooms will get filled with more types of stronger monsters, so it’s bound to come to an end if only through damage attrition. 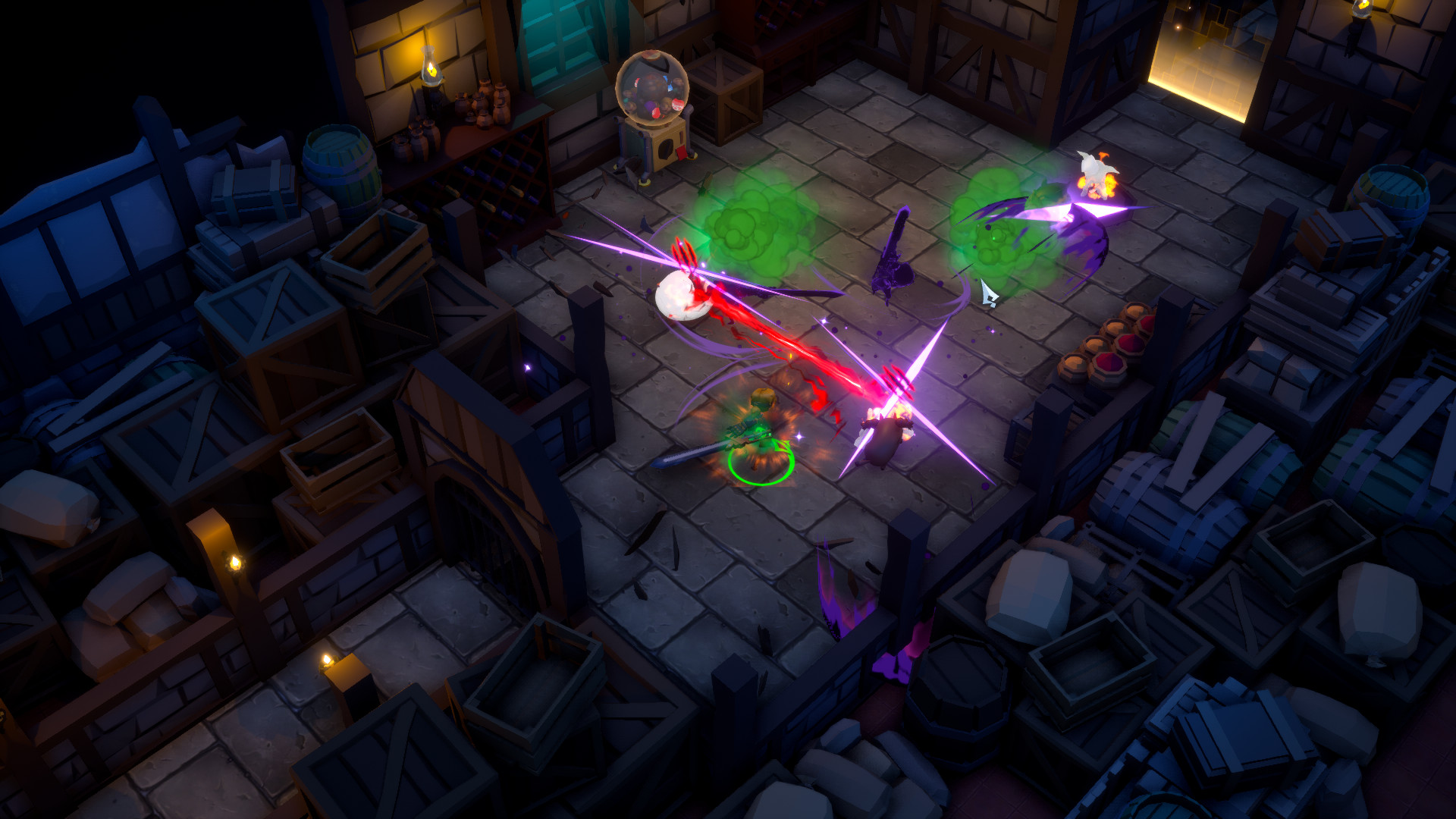 So it’s a shame it all comes falling apart due to a stylistic choice.  Yes, the monster girl designs are almost all straight-up pandering, with even the centaur’s art having a breeze ruffling her shirt up for a view of gratuitous curviness.  Nigate Tale is more than fun enough that it could get by without it, but the game knows what it is and isn’t shy about it.  Every character has a single normal image for when in standard conversation and a spicier one for when they’re summoned with a super-powerful magical attack.  There’s a huge, important difference, though, between the young-woman designs of most characters and the child-like art for Dorothy.  Maybe full frontal nudity barring a few obstructions wasn’t the way to go for a character portrayed this young in her standard art.  It doesn’t matter how entertaining a game is otherwise, because when it crosses a line as strong as this one, it’s time to back out of there at full speed.