Monster Hunter is a series that’s hard to get out a solid review in a timely manner. Older titles in particular suffered from poor reviews due to 20 to 30 hours just not realistically being enough time for someone unfamiliar with the series to get into the meat of it. Monster Hunter Rise is realistically no different, but it has a lot less guff and fluff to get going into fighting large monsters, so my initial review made it out to glowing praise despite at the time not having finished the final mission. Now after 200 hours, I feel like I can give further definitive thoughts on just how I feel about the latest entry prior to its planned updates. It should be noted this piece will contain spoilers for all monsters, final fights and story so take warning if avoiding those.

To get straight to the point: I absolutely love Monster Hunter Rise. Personally I believe it has the potential to become my favorite entry in the series to date with the addition of an expansion later down the line. Previously that title has been held by Monster Hunter 4 Ultimate on the 3DS, but Monster Hunter Rise is already pushing close to it even while not having as much content in its base form. Monster Hunter World never felt this way for me personally, as after the initial excitement and honeymoon period had worn off I realized how burdened I felt by the cumbersome load times, lacking overall aesthetic of the world that was building up and just feeling like the fights were too long without being more fun. Length of a fight is hugely debatable in the Monster Hunter franchise as most older titles had considerably longer fights, but they often feel long for no reason whereas Rise feels like the perfect balance where many fights will last around 10 to 15 minutes online with a full party against a tougher monster. There’s a limit to how long a fight can go without it starting to feel exhausting, so it was nice that Rise felt like it focused on making the fights feel more balanced in that regard. 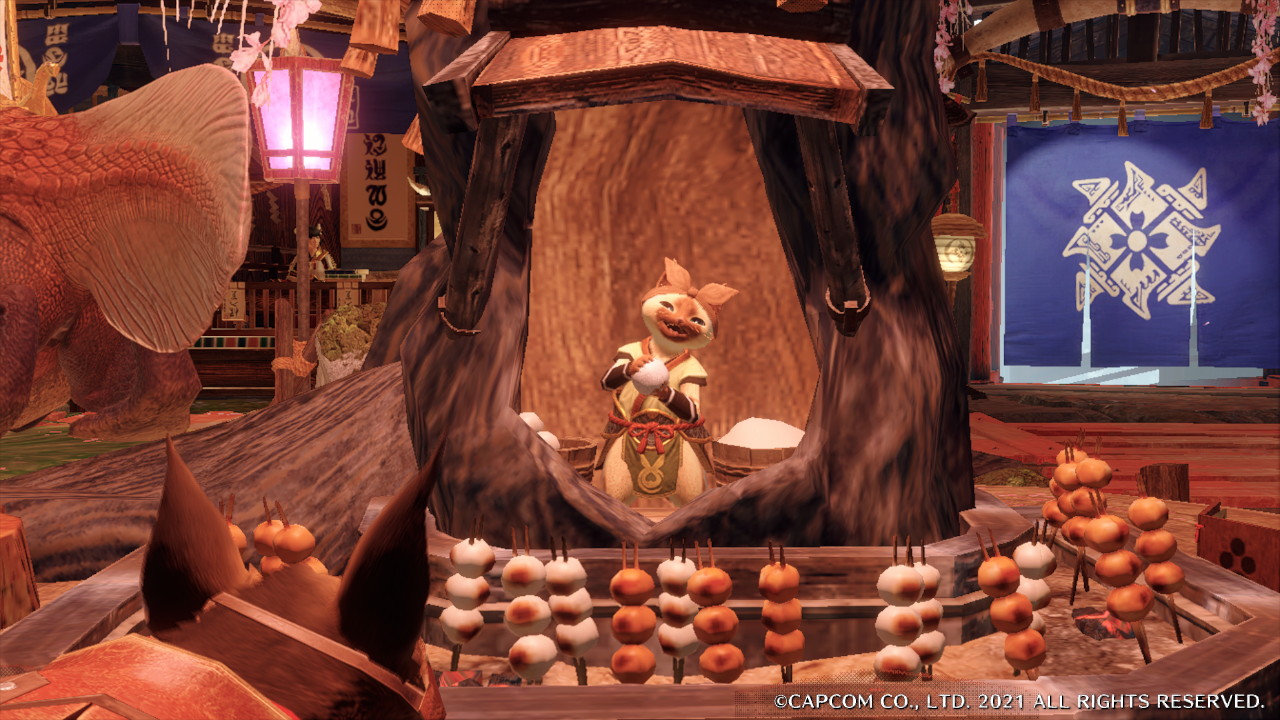 Have you ever seen a happier Felyne making dango before?

Online is, of course, the biggest part of Monster Hunter Rise and where most of my time has been spent playing with friends or other random hunters. The load times are fantastic, everything feels quick and snappy, and finding players to hunt with feels even easier thanks to the fact that players can simply search for random quests if they’re just looking to assist anyone. Experiences will vary, but the only time friends and I experienced any drops was when someone had a hiccup with their online connection. The gameplay is still smooth when fighting with little drops, with the exception of one particular area in the Flooded Forest that went a little too hard with the visuals and reflections on the water, but fortunately isn’t usually a main place fights go down.

When starting Monster Hunter Rise, Lance was the core weapon in mind that I played for over 150 hours. After crafting every single weapon in its tree, I swapped to Gunlance and have been using it since, but there’s this constant urge in the back of my mind to play every single weapon, or at least most of them. The last time I felt compelled to play more weapons was in Generations Ultimate, where hunter arts and styles made switching weapons feel quite dramatically different. It’s almost the same in Rise, except everything is much more focused and weapons feel extremely enjoyable to use. Traditionally I’ve stuck to one weapon for most of my time in a Monster Hunter title, but now I feel compelled to play them all or at least dive into what all they have to offer. Fortunately making armor has been a relatively smooth, painless feat so making armor sets to fit a weapon at a moment’s notice as never been easier outside of the occasional rare material. Part of the reason I’ve continued to play so long is because switching up weapons or silkbind attacks makes the combat continue to feel revitalizing. Well, that and wanting to complete all the in-game awards at least. 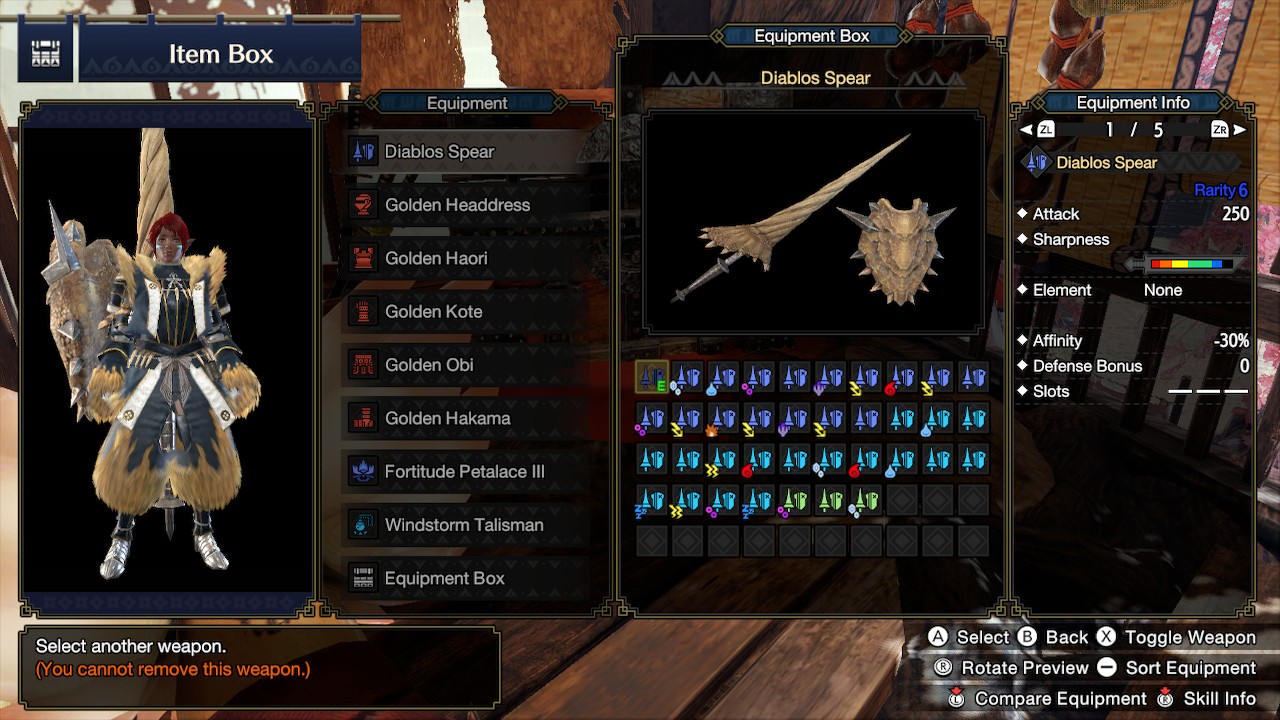 Nothing beats an arsenal of weapons

The monster selection for Monster Hunter Rise’s base form is 37 with the inclusion of Apex forms. Every new monster is a blast, and returning ones have great little tweaks to their movesets to make them fun to take down again. The new elder dragons, Ibushi and Narwa, also make for fantastic fights that mix them up in great ways. Right now Ibushi is a rampage exclusive fight that’s surprisingly climactic if a bit on the easy side as long as the previous waves of monsters have been dealt with. Narwa, on the other hand, has one of the most enjoyable end-game fights in the series. While it’s not terribly difficult, the fight itself is dynamic with rocks rising and falling as Narwa lifts them up allowing players to make use of their wirebugs to get on top of them to attack her or use guns lifted from the ground. At the end of her fight she plummets to the ground and makes a hole, going down too far to see. Although gone she’s revealed to still be alive with Ibushi and as it stands, that’s where the story has left hunters at a cliffhanger until we get our story update later this year. Personally the cliffhanger didn’t damper my enjoyment at all, and in fact I’ve found myself the most invested I’ve ever been in a Monster Hunter story to date. These titles don’t generally try hard at all when it comes to their storytelling and that’s never bothered me, but the drip-feed of story with characters I feel invested in helped pull me in more outside of just fighting to win.

Ultimately, however, what gives Rise a leg up is all the little details and worldbuilding. The way the drumming felynes in the hub sound when standing next to them, the housekeeper blowing bubbles and getting excited and even the way villagers eat dango excitedly together. Kamura village feels like home, it’s fun to just casually explore and while the villagers might just have the same few quips it’s nice that so many of them now have actual name and feel worth investing in. The hunter in Rise isn’t just recruited to help out a village in need, but has lived in Kamura their entire life and is protecting friends and loved ones. Exploring the actual maps themselves is also an equally-enjoyable venture, with wirebugs still offering the most fluid movement the series has ever had. It’s exciting to see something in the distance with the goal or finding a way on top of it or discovering a secret cave with materials inside. What’s even better is this exploration can be easily be done with friends, and there’s tons of fun to be had whether making up games while exploring or just running around fighting the monsters that spawn. 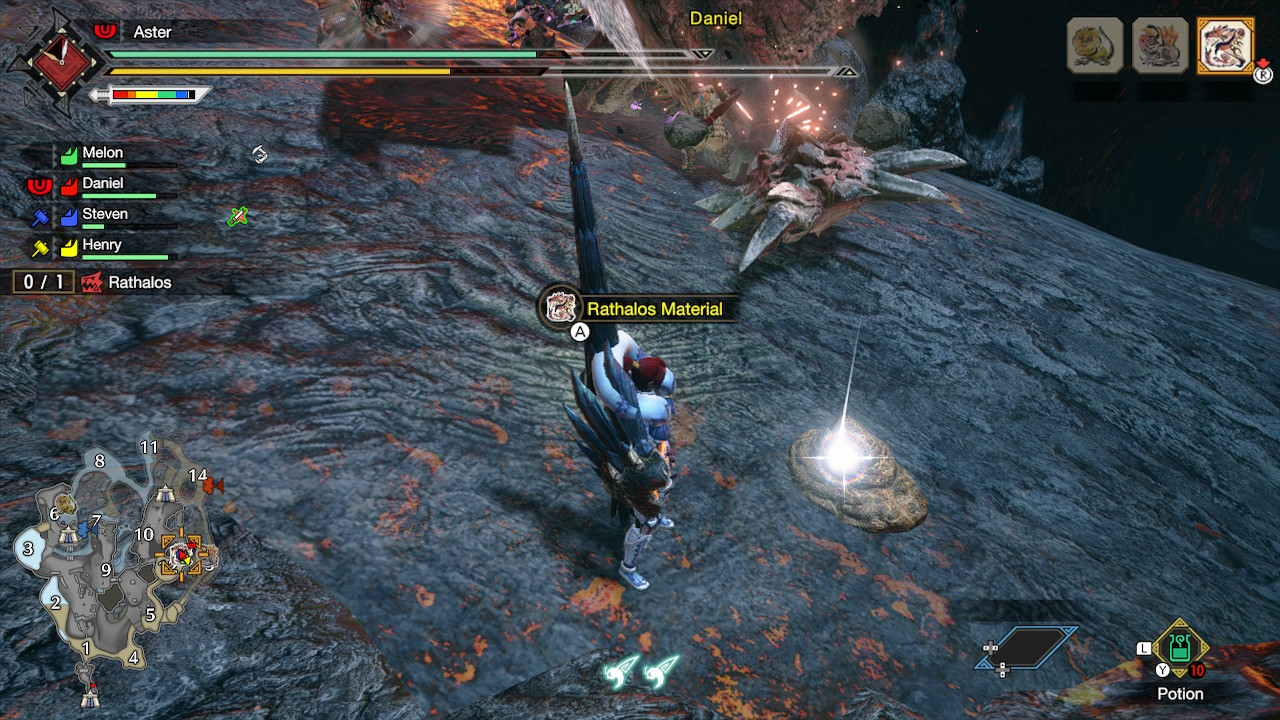 Since its release Monster Hunter Rise has been the delight of the year so far. It’s taken up almost all my gaming time outside of a few breaks, and although I’ll likely be putting it down for a bit until the upcoming update, there’s a constant tingle in the back of my mind when I’m playing that begs to go back to the hunt. There’s always something to do, and that drive always pulls me back especially when the gameplay is just that good. While ultimately I ended up feeling a bit down on Monster Hunter World’s endgame for a variety of reasons, Rise has been an extremely uplifting experience that has made for some of the most grind-filled gameplay in years. The hunt never stops, and for me it will likely continue in Rise on and off for the next two years.