If there’s one thing that can be said about the Earth Defense Force, it’s that they’re always victorious in the end.  Sure, the planet may lie in ruins with a body count in the billions, but Earth is saved and the invaders repelled, and it’s not like anyone else was stepping up to do better.  Even by the questionable standards of the EDF, though, the opening of Earth Defense Force: World Brothers doesn’t paint an optimistic picture.  The entire planet has already been ripped apart into discreet chunks floating around the molten cubic core of a shattered Earth.  The EDF has all but completely fallen apart with no united planet to defend, but a lone soldier fights on with an undying spirit and inexhaustible hope.  As the new commander of the Earth Defense Force he’ll continue to repel the invaders, finding new members of the EDF in every battlefield until a force of World Brothers has been assembled that no alien could dream of standing against.  Except Dark Tyrant has an imagination as big as himself and every bit of it is focused on planetwide destruction.

Earth Defense Force: World Brothers is the latest in the long-running series, already out in Japan and scheduled for late May in the US.  It’s also a spin-off from the main series with a decidedly different look, going all-voxel and aiming for as close to an all-ages entry as the series can manage.  It’s rated T, sure, but a cute and friendly T despite the buckets of goo from endless thousands of bug kills.  There are several things that need to remain consistent for EDF, and one of the big ones is the screen crawling with dozens of enemies that the massive firepower of the Earth Defense Force’s weaponry can just barely contain.  Add in a cheesy B-movie presentation and heroes who commit mass destruction that does as much damage to the world they’re trying to protect as the alien invaders would and you’ve got all the necessary elements, and everything else is subject to change. 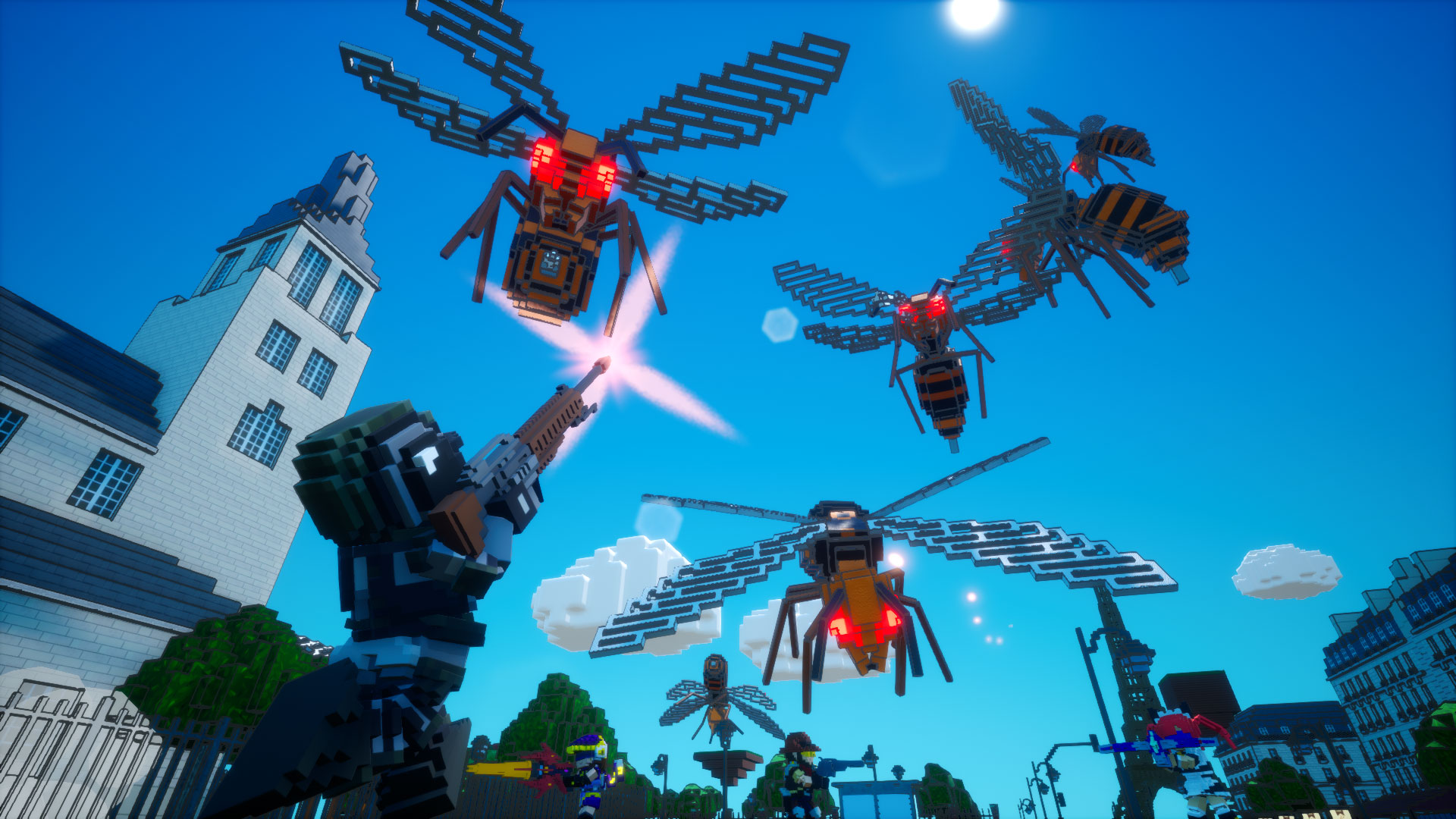 Which doesn’t mean EDF: World Brothers is all that different from the mainline series once you get a sense of how its systems fit together.  Sure, it only starts off with a single character class, but that doesn’t last past the tutorial level.  The way new characters are added is less “pick from these four types” as “every new EDF member plays differently.”  The way it works is that the standard Ranger-type class is the starter, but one of the major sub-quests of each level is finding the scattered EDF agents kicking around the landscape.  Take a few seconds to help them up and they join the squad, either automatically filling in an empty spot on the four-character roster or heading back to base.  Once joined to the squad they can be switched to at any time, instantly trading places with whoever you’re playing at the time.  Fly to the top of a building as the Wing Diver, then switch to the Ranger and snipe from the heights, or fight to the center of the action and switch to a character with just the right special move to call down laser-based devastation.

Each rescued character is practically their own class, albeit modeled on the EDF’s Ranger/Wing Diver/Air Raider/etc. classes.  A good example of this would be Tulip Sister, who’s basically a Ranger.  Like most of the found characters she’s a super-stereotypical member of her world’s nation, in this case a Dutch girl in a traditional dress.  Less traditional is her standard-issue grenade launcher, which lobs explosives that carve out chunks of any building they hit as well as the bugs swarming over it.  All characters also have a specific secondary ability, and Tulip Sister can toss out tulip mines which land in a row of five explosive flowers just waiting for anyone (friend or alien) to walk over them.  The final ability is a special attack earned by destroying enough enemies or picking up the yellow boxes they have a chance of dropping when killed, which for Tulip Sister is a cute little windmill that acts as a turret to fire cute little deadly cyclones. 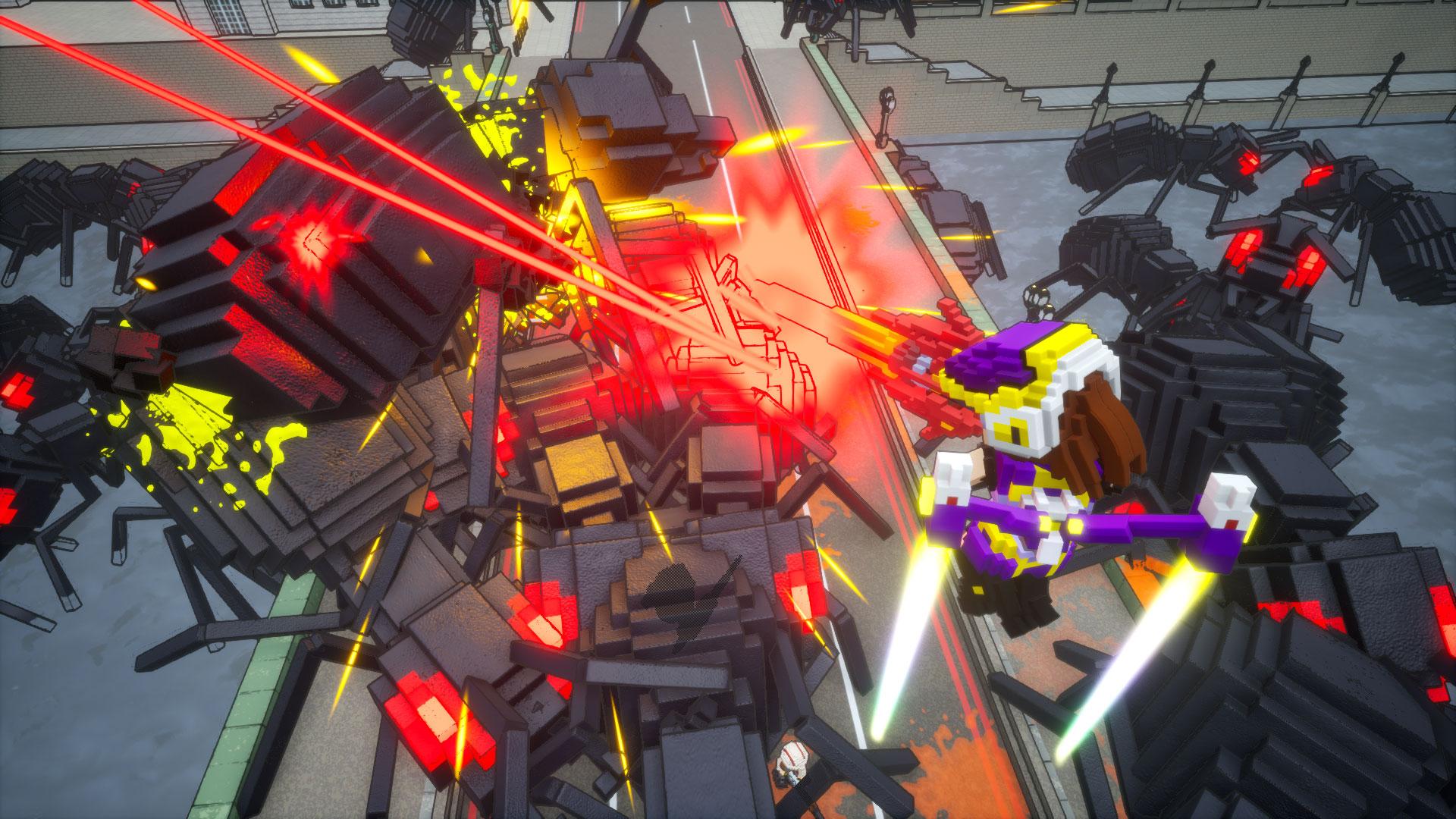 The way new weapons are delivered is also different from the series standard, in that each found EDF member comes with their own signature armament.  There are roughly seventy characters available, but they also come in different types: alpha, beta and gamma.  On top of that they can come with different loadouts depending on the difficulty level, so seventy times three times a bunch equals lots and lots of different weapons to play with.  Rifles, rockets and homing missiles are just the start, with swords, miniguns, boxing gloves and the ever-difficult Sky Turtle (super-slow but insanely powerful missile that’s almost a joke weapon for the series until it lands a hit and annihilates everything in a hundred-meter radius) all putting in an appearance, plus more weapons both standard and significantly less so.  While each character is locked to their own weapons at the start, as they level up by being found again in new missions they eventually gain the ability to use more and different types of guns.  The level-up also applies to the weapons, meaning a level 1 gun can’t be shared around quite yet.

It’s a different system than normal for progression, but the end result is still designed to be the same: play a bunch, get more toys.  The Earth Defense Force series has always had high replayability, especially with the multiple difficulty levels offering new and ever-crazier weaponry as an incentive to push just a little harder into hostile territory, and World Brothers isn’t looking any different.  The demo I got to see was hands-off with the bulk of the time on earlier introductory levels to explain its systems, but it did bring the promise of being just as chaotic as a mainline series entry despite the kid-friendly blocky look.  It’s basically an intro-level Earth Defense Force, sure, but not only is there the usual Inferno difficulty to work up to, but one of the DLCs is an even harder mode beyond that.  The intro-EDF also extends to both the characters and enemies in the game, both of which are taken from every entry in the series.  Iron Rain‘s Prowl Rider character class, with its zip line allowing it to grapple buildings for quick mobility or giant monsters to close the distance for a massively powerful sword strike, will always be a favorite, but there’s EDF soldiers from every series entry including Insect Armageddon. 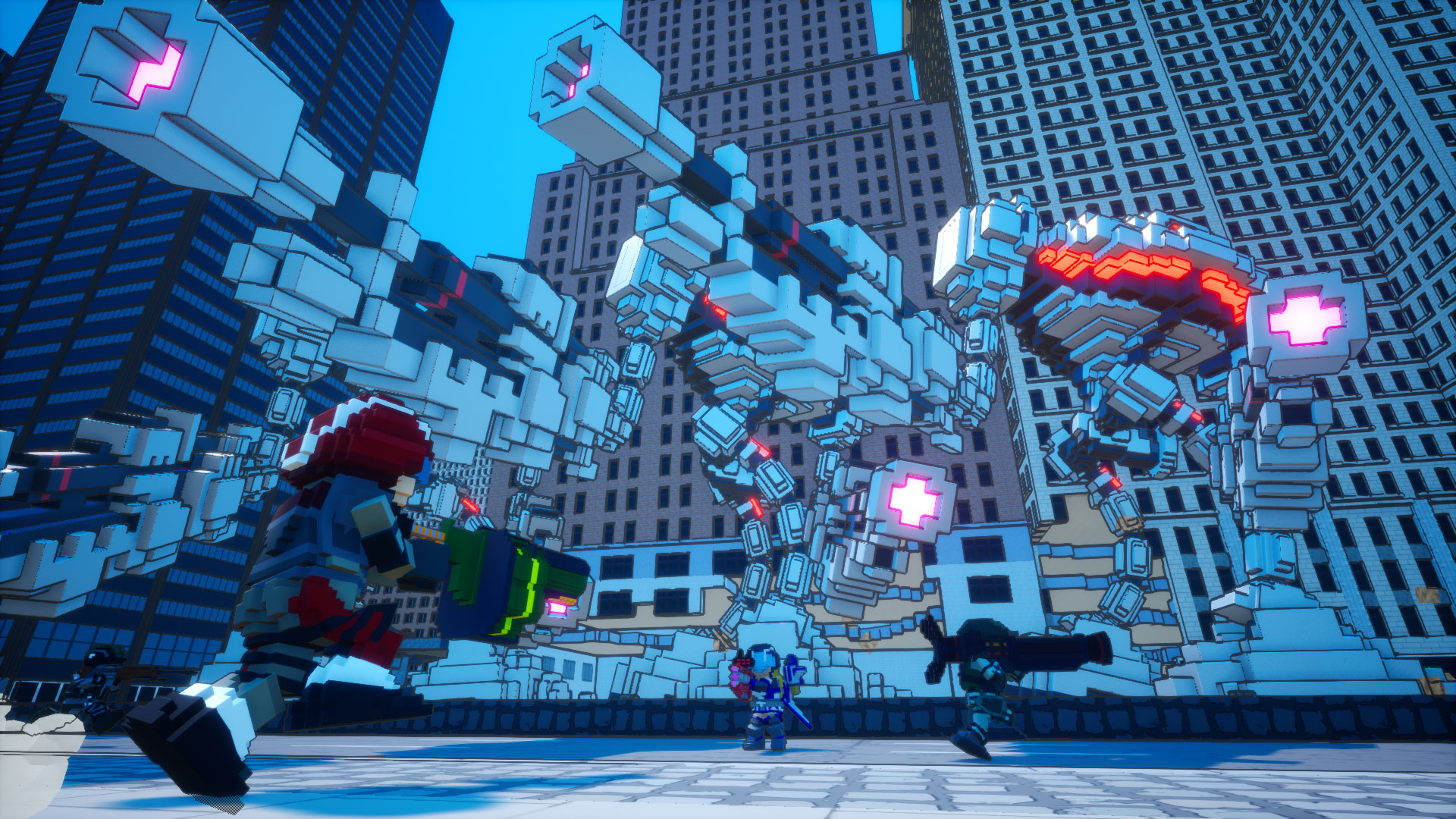 The spin-off Earth Defense Force games have had a difficult time finding their audience, generally due to not feeling quite right or just not being particularly good.  World Brothers is looking to buck that trend with its friendly, cute nature, trying to bring in a whole new younger audience while also making older fans happy by being a combat tour of the series history. Old favorite EDF soldiers are joined by a wide cast of colorful new combatants, all fighting together in a four-member unit to take down everything from giant ants, flying saucers, flying saucers again, ungodly huge, beasts, monsters and kaiju beyond counting.  The Earth Defense Force is ready to save the world again, fighting back the invaders through the shattered remains of what used to be a planet.