It’s not unusual to find the first twelve to eighteen months of a console’s software line-up often prioritizing the technical leaps this new, latest generation of hardware, has brought. Sometimes, though not always, at the cost of everything else. A game that may indeed prove there’s an increase in visual fidelity compared to the previous console, but ends up creating an even more troublesome issue on the fact of it even being that fulfilling to engage with. This issue has emerged one too many times in the recent past and in most cases, the answer to that important question, is the game any good, is a resounding and disappointing “no!” The same applies to that which isn’t simply an increase in poly-count. If a console, if its very peripheral in fact, is marketed as introducing several new (and/or “innovative”) functions — features which, again marketing-speak, claim to heighten the player’s experience just that bit more — many more questions spring into one’s head. First, bluntest of them all: “OK, but does it though?” in relation to those bold claims of providing a new level of immersion. Second, to fall back on that most bothersome, though crucial, of concerns: “does this come at the cost of the game itself?”

Coming into Returnal — if I’m splitting hairs here, the first proper price-tagged original PS5-exclusive title for Sony’s new machine — those exact same worries are (and were) prevalent. As they should be; skepticism is, in reasonable doses, a healthy line of thinking to administer. Maybe not to the extent you question the overall quality of the game as a whole. Housemarque having already established both on PlayStation and further afield, that their knack for frantic, arcade-styled, ducking-and-dodging gameplay can find an audience. A philosophy on design that has proven to be a winning formula many a time. But just how much have Housemarque been shall we say “persuaded” to push these new features to the forefront? Regardless of the volume with which they naturally emerge during play. Just how well would such things as the DualSense’s haptic feedback or the inclusion of 3D Audio really flow into one’s natural progression? Moreso, do they prove as beneficial an addition over a similar experience had it, in an alternate scenario, been built for the PS4 instead? I repeat: would that come at a critical cost to the gameplay — a case of utilizing new technology as a means, sadly, of distraction? 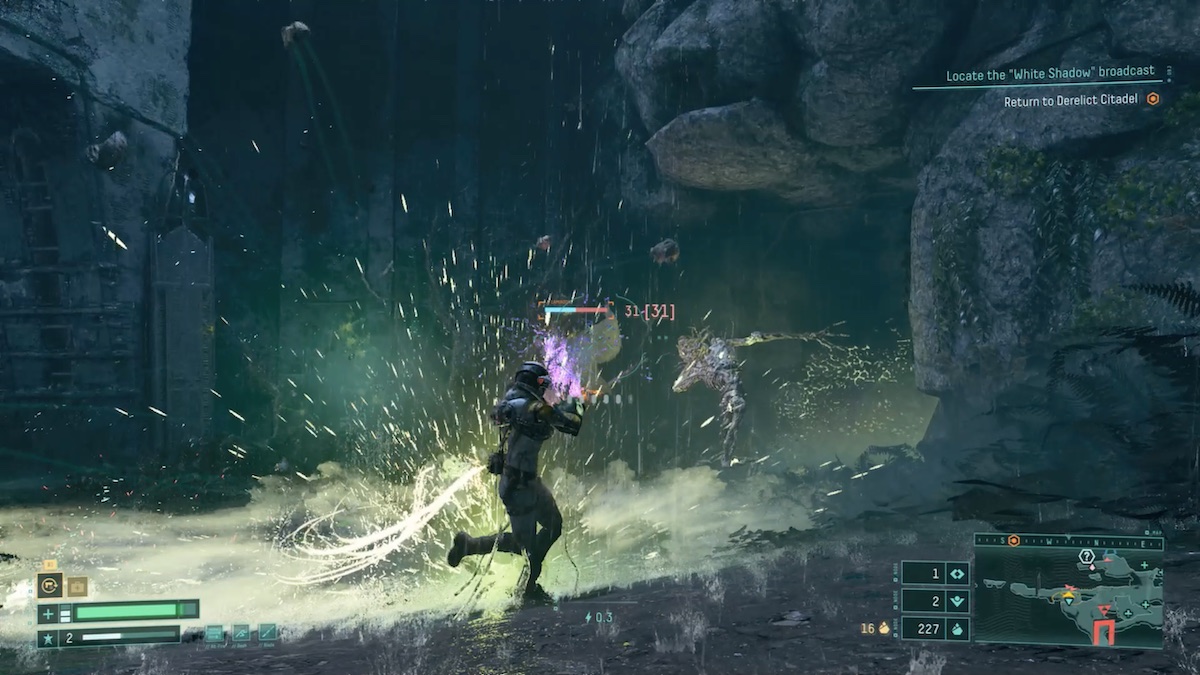 How wonderful it is then to find that Returnal — even outside the deserved merits of its own core gameplay and interlocking systems working in harmonious tandem — is not just a convincing argument in favor of the PS5’s unique feature-set, but six-or-so months in is easily the best advertisement for such. At the risk of sounding too much like an extended branch of Sony’s marketing department masquerading as genuine opinion here, this truly does feel like the game-changer all enthusiastic PlayStation fans were hoping for. Housemarque having clearly approached the inclusion of haptics and 3D audio alike, not as some shallow, mandatory checkbox to tick. But actual, designed components that lie at the very heart of a player’s evolving mood. The kind of heightened immersion you can’t help but stop and pause to admire. Not since the days of playing Metroid Prime on my Gamecube for the first time — exiting Samus’ ship on the surface of Tallon IV, to look up and bathe in the technological wizardry of droplets actually landing atop my visor — have I found myself in awe at something as simple as a downpour of rain.

The way the DualSense’s feedback narrows down such environmental and reactive details, refines it even, to many an individual pitter-patter in my hands. How the audio differentiates sound depending on whether you have the map screen up or not, but then proceeds to throw that at you in many a surrounding layers of sound. How 3D audio changes the very spatial positioning, let alone timbre of such sounds. Not least when headphones are utilized and you can’t not stop what you’re doing. As if walking through steam-bursting and fume-spewing pipes as Samus Aran — one’s vision fogging over briefly — all those years ago wasn’t startling enough. Now we have weapons and firearms whose very barrage of energy and particle-bursting ferocity is now detailed in the very feedback of the DualSense. The pounding thud of a six-round, shotgun-style weapon feels different to that of the LMG-like “Voidbeam” whose larger magazine and persistent, long-range bolts run firmly amok in one’s hands. The crackle, crumble, explosion and dispersal of weapons is all there. 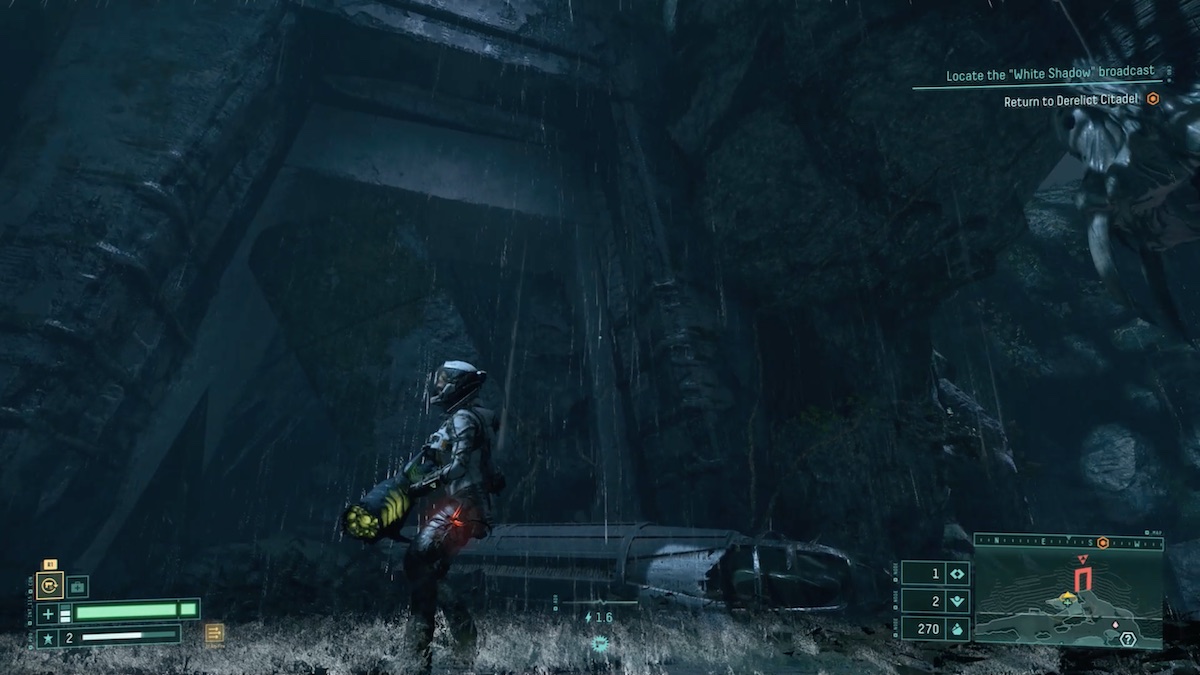 But here’s the critical point about all this though: as pleasing an aesthetic touch this proves — how it better draws you into Returnal’s ever-shifting, procedural geometry — Housemarque haven’t just considered these new features to be purely spectacle. Sufficient enough that momentary experience clearly is. The most impressive thing about the developer’s thinking isn’t so much wowing players with a brief excursion into atmosphere, but using it as an extension of curious exploration and lite puzzle-solving alike. It’s one thing to address the minute details our senses can latch onto — both touch and hearing alike — but it’s another to integrate that into the moment-to-moment encounters players will quickly come face to face with. And I’m not just talking about homing in on swarms of enemies. Out-of-shot threats that, in any other scenario, could gang up on you — firing waves of bullets unbeknownst to yourself.

Though this too shouldn’t be ignored; the ability to nail down exactly where a threat is looming, where they’re moving to, is a massive aid. Drawing many a parallel to one of the scenarios Mark Cerny so gleefully pictured as a potential scenario back in March of last year. To quote: “With 3D audio…the idea is you know the enemy is precisely there and you turn, and you take it out.” I was skeptical at just how well the PS5 would meet such lofty and specific heights as this. To perform just as well not simply on the basis of replicating such a scenario, but doing so in as quick a fashion. But lo and behold, that’s precisely the kind of experience I’ve been blessed with in the 20-or-so hours I’ve had with Returnal. Many an experience in fact. Yet it’s not just combat encounters that benefit here. As someone who loves the emergent, almost-accidental nature of exploration, Returnal also knows how to play to that small, budding crowd of people that delight on stumbling into things, rather than out of them. 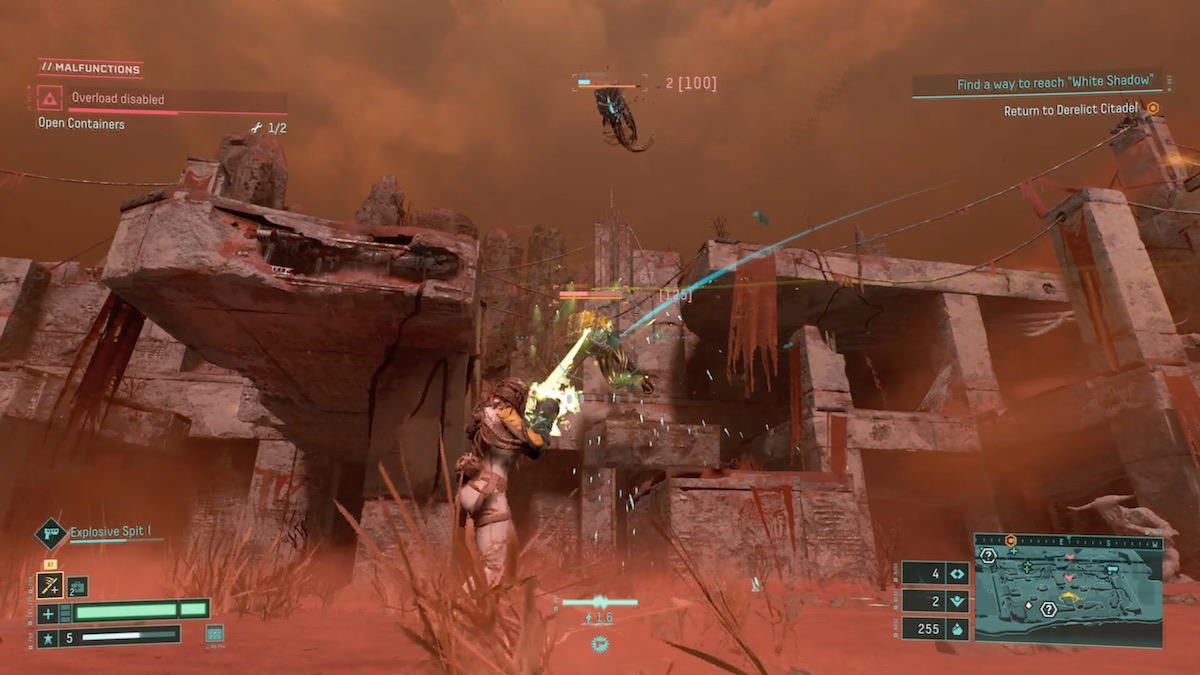 Surprising as it was to enter the third biome, striding the linear path put before me only to then stop in one’s tracks — latching onto the sound of a waterfall of sorts. Out-of-sight, initially unsure on where it was but focusing on what the audio was suggesting, could make an educated guess on where it wasn’t roughly located, but precisely located. Another delightful outcome materializing; first guess offered up…and there it was! A sprint and aerial dash later, a hidden crevice with a vital health pack to pick up. Then seconds later, happily ready to leap from one linear platform to the next, another out-of-shot sound — the violent whirring of a teleporter. Once more, assuming where precisely it was positioned quickly delighted (and amazed) that I was two-for-two when it came to guessing where such a source was located…and where it actually ended up being.

With all the talk and hubbub about what the PS5 would bring to the table — other than the expected incremental nature of visual fidelity and textural detail — it was only natural that the immediate response from some was far from starry-eyed awe. In regards to the talk around both the console’s improved feedback and use of sound design as a means to not just immerse us, but improve how we instantly react and subsequently act upon our instincts mid-play. Having played through what is so clearly a feature rich, systems-heavy exclusive in the shape of Returnal, let me end this by declaring Sony would be foolish in not pushing Housemarque’s latest as the [so far] shining example on how much this console has improved upon the PS4. Not just from a purely visual stance, but an engaging one on top. Aesthetic and graphics are all well and good — that grander enveloping us in the ravaged, ruinous world, will get its dues I’m sure. But it’s how Housemarque have cleverly identified the mechanical benefits here — how 3D audio specifically can aid, let alone entice the player — that is sure to lead players going into Returnal towards satisfyingly-brilliant moments of awe-inspired discovery. The rain too; still can’t get over how satisfying those droplets feel and sound on top.