The acquisition of the RIG brand by Nacon allowed the latter company to gain traction in North America – and today, they announced the release date of their first major controller under the RIG name. There are many wired Xbox controllers on the market – but none of them offer quite what the Pro Compact does. They’re usually basically stock Xbox controllers with a wire and work fairly well – but don’t go beyond what a regular controller would in terms of features and quality of life. The PRO Compact has an app to adjust things like stick and trigger sensitivity. The latter is an absolute game-changer for shooting fans, because a long trigger pull can be the difference between a win and a loss in an intense FPS.

Players will also have the freedom to change up button mapping – so if you prefer to have A button functions moved to X, you can do it. Audio is something that rarely plays a part in controllers, but the PRO Compact has something that no other controller has – Dolby Atmos capability. This means all a player needs to do is have this controller and get the Dolby Access app on either their PC or Xbox and plug a headset in to enjoy a more immersive audio experience. 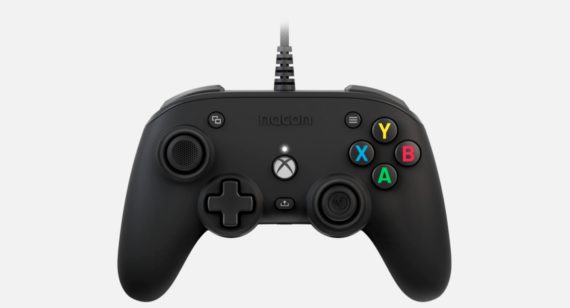 The usage of Dolby Atmos could be a game-changer for those wanting a more immersive experience – because in shooters, it can be a big deal as it enables players to have a better idea of where folks are in relation to you. The more compact design is evocative of the Dual Shock 4 – only with the offset stick design. The d-pad looks nice and large, and this controller features the new Series family of console upload button alongside the Navigation and OneGuide buttons. Those are placed in a Dual Shock 4-style arrangement, which may take some getting used to for long-time Xbox controller users. However, anyone who uses a PS4 controller as well should be able to get acclimated very quickly as it’s a very similar design.

The PRO compact will be available in white and black and is available now for pre-orders from GameStop, Walmart and Target – and will be available in Best Buy stores on May 20. In Canada, Walmart stores will exclusively distribute the controller. Beyond the PRO Compact controller, Nacon also announced a new version of its RIG 500 PRO and RIG 700 Series gaming headsets for Xbox One, Xbox Series, PS4, PS5, and Windows 10 PCs.