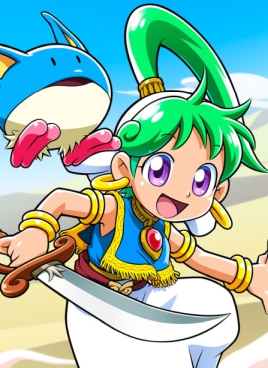 The Wonder Boy series has had a bizarre, but fascinating history. What began as a fast-paced action-platformer morphed into the roots of the Adventure Island games thanks to a strange situation of Hudson licensing the engine and game, but not the characters, resulting in a split with two varying franchises with similar-playing foundations. Over time, the Wonder Boy series morphed into its own thing with a more robust line of games, and the Wii’s virtual console played a large part in it gaining exposure on a grand scale since it gave many people a chance to easily enjoy many entries in the series. No entry was a greater example of forbidden fruit than the fourth — a more open-world adventure starring a rare for the time female protagonist named Asha that pre-dated Metroidvanias by several years. It was widely-regarded as the best-playing entry in the series and has held that crown easily until the release of Wonder Boy III rekindling the franchise on modern hardware, and then Monster Boy keeping that flame alive. In doing so, it led to a desire to bring the best-regarded entry back in a more modern form.

Enter Wonder Boy: Asha in Monster World — a full-on remake of the original game with a lot of modernization to make it feel like a brand-new experience even for veteran players. It’s interesting to play this after so many years of the Shantae series because it becomes so clear how influential Asha’s adventure was to Shantae. Both feature strong female characters in the lead role and have them saving their land while also getting help from townspeople — adding a sense that they world they’re inhabiting is more rooted in reality and the in-game stakes affect everyone and not just the playable character and their immediate families.

Monster World IV as it was known before was a great game in its time, but time also wore its format down and other, better side-scrolling action games came out later. Few had the sense of worldly depth and RPG-like progression for Asha’s skills, though. In the pre-Metroidvania era, this was a rarity and the development team has managed to keep the experience as true to the original as possible while still modernizing most parts of the experience — to humorous effect in some cases. The original had a lot of humor in it and that’s something that shined through in both the original fan translation many years ago and then the official translation that hit the PS3 in 2012. 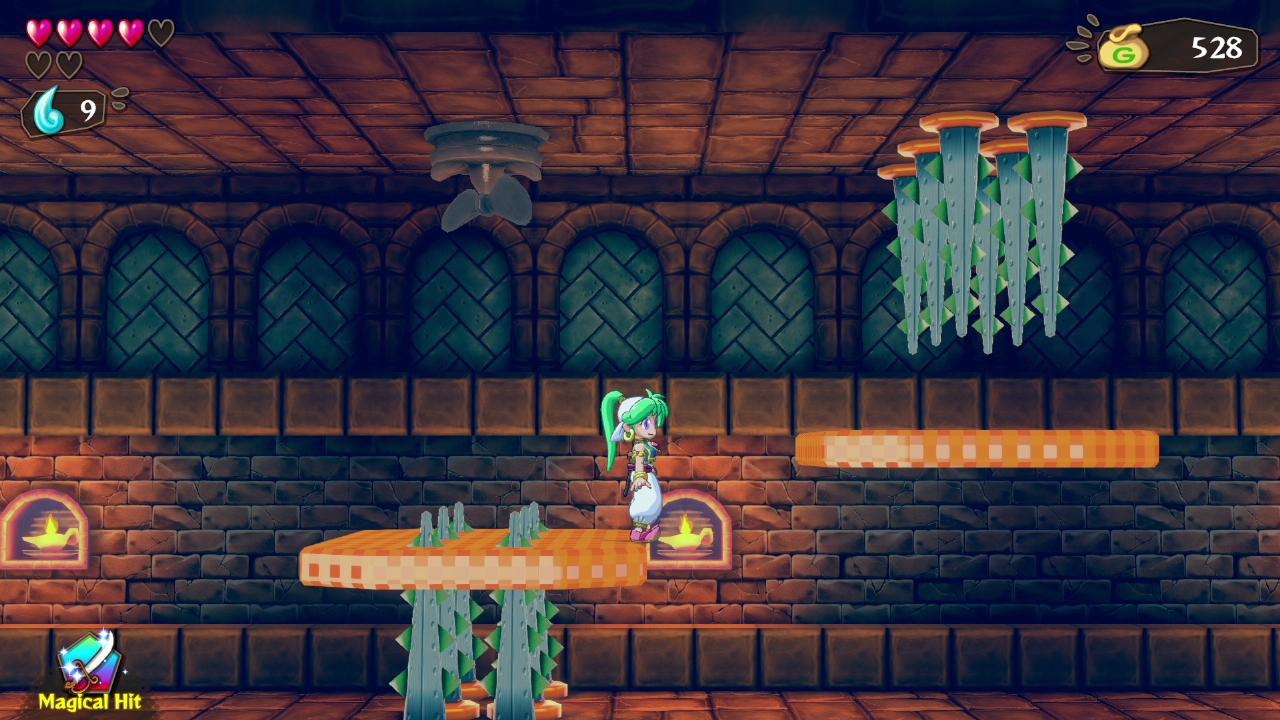 In the modern remake, the sage who once helped you save the game now laments the modern trappings of saving at any time. He is grateful, however, to still be Asha’s companion to help her save the game — so while his original role has been theoretically taken away, even in the game itself, it’s actually just been adjusted to keep the role and change it up for a more modern game design. Like Shantae, the player goes from town to dungeon and unlike a lot of Metroidvania games, there isn’t a way to get lost here. There’s exploration to do in towns and it results in just grabbing extra goodies — like blue teardrops taht allow you to build up your HP gauge when collecting 10. Exploration in both stages and the town itself is easy to do, but something players have to be careful about as you can’t go back and re-explore in most cases. If the player dies after finding a hidden area, however, then it’s a simple matter of reloading the save and then learning from the past to find the secret and hopefully avoid death once again.

The minute-to-minute gameplay is exciting, as Asha has a variety of sword attacks her disposal. Her standard forward strike has a fair amount of range, while an upward and downward strike help eliminate being caught off-guard. The latter is especially helpful in busy rooms as it enables her to land a quick shot and then follow up right away with a successive shot that might be enough to take out a foe without taking any damage. Lather, rinse, and repeat to clear out cluttered rooms and it’s easy to see why the game has been so highly-regarded for over 25 years. It’s a fast-moving game by the standards of the original game’s time and that speed has only been made better now as things have been given more polish. There’s a better flow now between a downward strike and standard strike and crafting makeshift combos is a lot of fun. Weapon and defensive shield upgrades help keep the player in-line with foes, with things like elemental strengths to her later weapons tying nicely into enemy weaknesses and helping to keep the adventure going with new challenges from stage to stage. 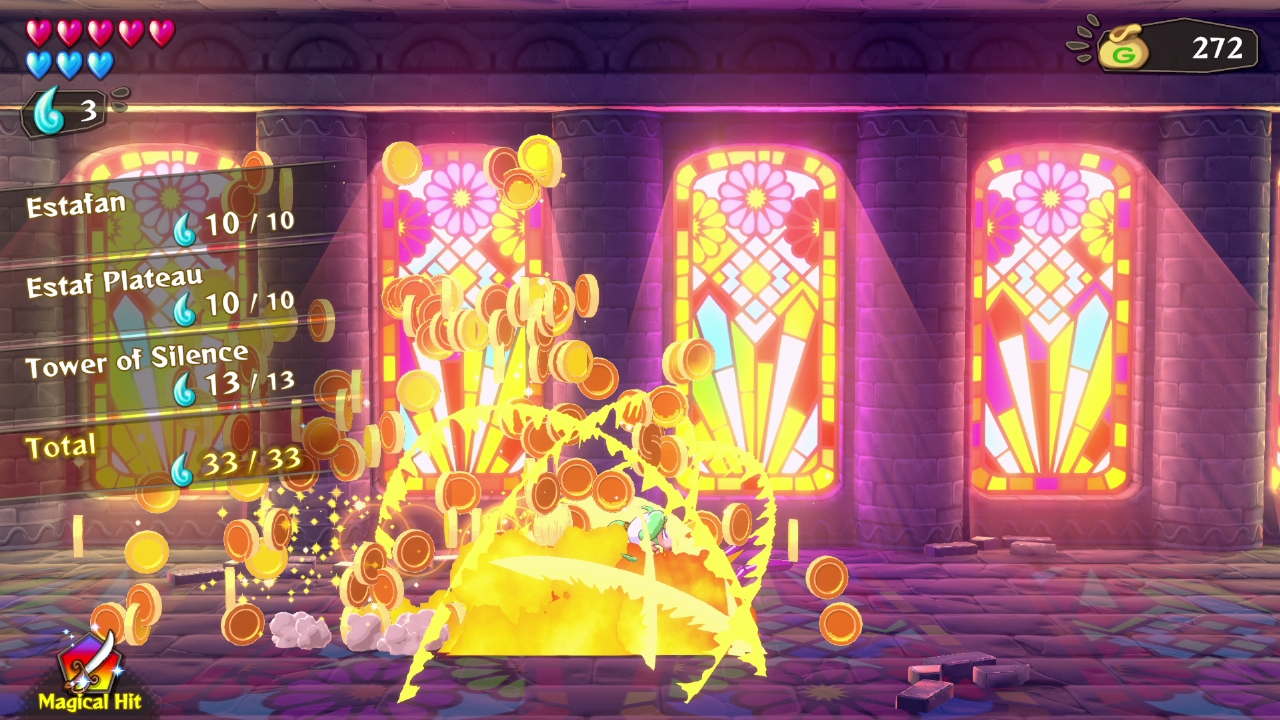 The platforming side of this action-platformer is a lot of fun and being aided by her little bird helper allows her to have a nice double-jump, while things like spike traps and lava-falling sections require the player to be on their toes at all times. Being able to save at any time is a Godsend and things like vending machines also help to keep the difficulty manageable. Farming for money is something that the player can do if they so desire, but isn’t required to make solid progress. Some larger enemy types also have common health drops — meaning that if the timing works out, it’s possible to grab health from them instead of spending money on health so that it can later be spend on gear upgrades.

Visually, this remake keeps the same vibrant color scheme that worked so well before and revamps everything with a cel-shaded design that keeps the spirit of the original alive while modernizing the look in all the right ways. Faces have far more detail, as do animations as a whole, resulting in the original’s comedy, like Asha shaking her butt while collecting stuff out of a chest being amped up to be even broader and sillier. This works in the game’s favor as every gesture winds up being more exaggerated and it works surprisingly well. Normally, that’s a hit or miss thing, but it’s all-hit here. Move and jumping animations are better, and the environments feature more detail and depth — as Asha goes in and out of doors by walking in that direction in the game itself — adding a rare sense of real-world space and location to a 2D action-platformer.

The soundtrack has always been an underwhelming part of Monster World IV, but thankfully the remake bumps it up and adds depth. Beyond having more tracks, the music itself has more going on while keeping with the Middle Eastern flavor of the songs. The use of more voice clips does a lot to help add character to the cast as well — with major characters getting voice clips beyond just Asha getting a yelp for taking a hit like the original release. Sound effects have been punched up as well, with sword swipes coming across better now than before thanks to more depth in the effect. All in all, the remake succeeds from an audio perspective. 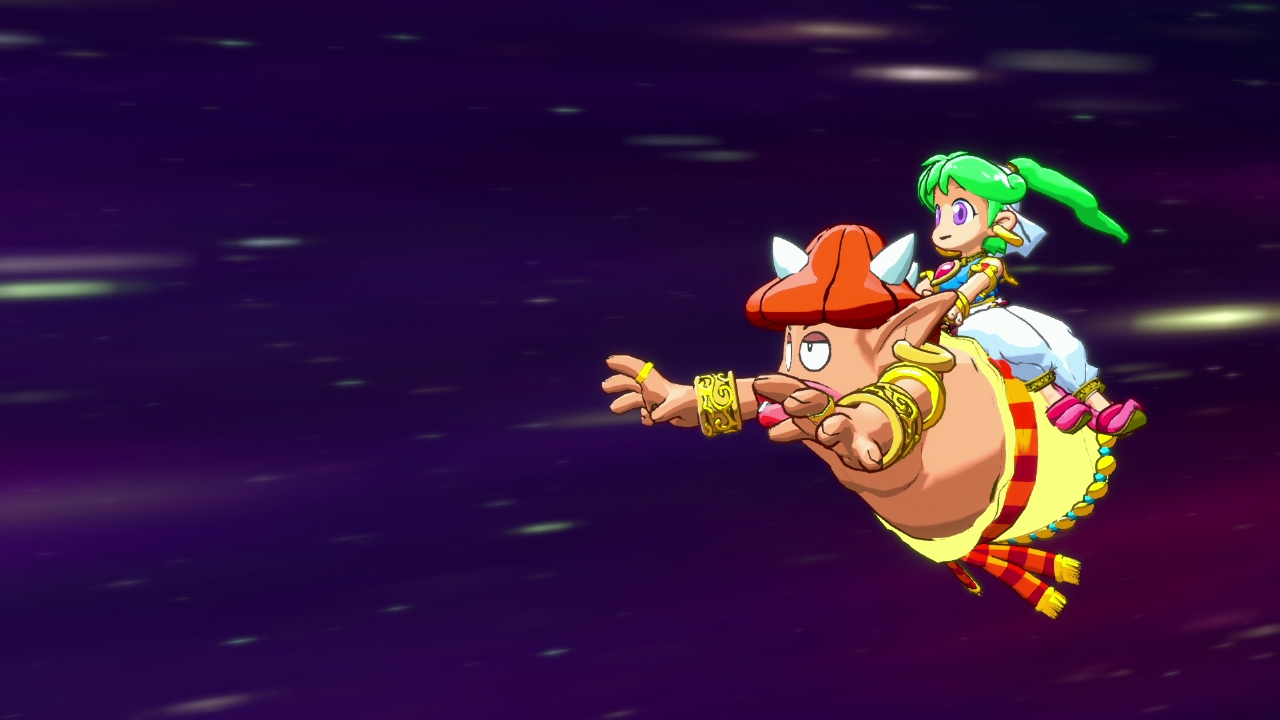 Wonder Boy: Asha in Monster World improves upon Monster World IV in every way. The gameplay flow is more organic and modern, and the remake feels like a full-on modern game instead of a modern-looking game over the top of an older game’s shell. It’s impressive to see how much more fun this version of the game is to play than the original — and the original release is no slouch — but the developers have taken great care to keep everything that made it work and improve upon it. It plays better, looks better, sounds better and is a more cohesive experience now than it ever was before. Wonder Boy: Asha in Monster World is one of the finest 2D side-scrolling platformers on the market and the best remake of a classic game in quite some time.