The problem with stuff is finding a good place to put it all.  Everything goes somewhere but sometimes that spot needs to be multifunctional, especially when in use for several hours in a row. TVs and monitors in particular seem easy to place, thanks to an endless number of desks and other flat surfaces designed specifically for their needs, but even so it’s a problem that can be more complicated than it looks.  Sitting for hours is just plain unhealthy, which is why rising desks have become a staple feature of any given office.  For home use, though, they’re a little less common, and even then they tend to end up being a useful office tool rather than anything that might be used as a gaming aid.  A good example of this is the Victor DC840B, with all the features you’d expect from a rising desk, but talking about office furniture generally doesn’t fit under the wide range of topics a gaming site might cover.  If you want to put a couple monitors on this desk and stand up from work now and then it will serve admirably, but as the underpinnings of a classic gaming center it really comes to life.

The Victor DC840B is basically a flat 47.25″ x 23.625″ surface with a pair of legs, one to a side, to keep it in place.  No shelves or other storage areas hide out underneath, and the motor is tucked away behind the bar that runs slightly to the rear of center across its width.  The desk came in pieces in a pair of boxes but assembly was quick, taking about twenty minutes if you read the instructions or a bit longer if you don’t.  Once assembled the only indicator that this isn’t a generic table is a small console with six buttons and a tiny three-digit LED display. One button is Up, the other Down, and the final four are presets for user-defined heights.   It bottoms out at 28.7″ and rises all the way up to 48.4″, which isn’t a great travel-range as rising desks go, but more than serviceable for the purpose I’m about to use it for.  The maximum load is also a bit on the low side at 110 pounds, but seeing as a 27″ CRT TV weighs 95 pounds (or at least the one I’m using weighs that much) once again it’s more than good enough for the need.  These stats make a little more sense when taking price into account, seeing as the DC840B comes in under $500. 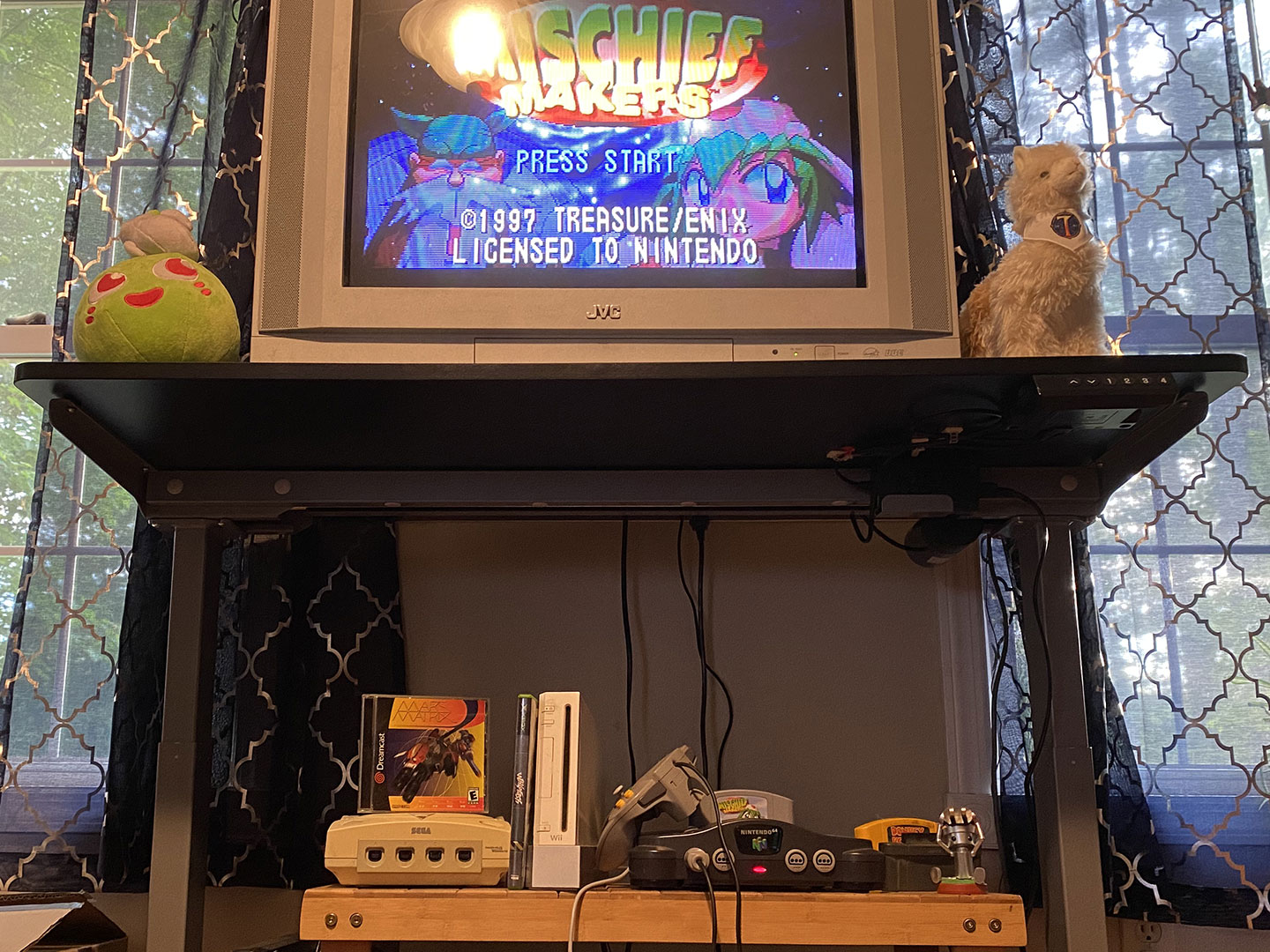 As mentioned earlier, if you want a standing desk for the office the Victor DC840B will take care of you nicely, but that’s not its purpose here.  Speaking as someone who’s been gaming for way too long, I’ve got a ton of unused systems and games in boxes that could stand a better home, and a rising desk ended up being the perfect starting point to create a classic gaming center.  Step one was assembling the desk, and after that came the need to find the necessary pieces to fill in the gaps.  First up was a TV, with my last CRT having died years ago.  While I’d have honestly preferred something in the 24″ size, quality CRTs simply aren’t as common as they used to be so I considered myself lucky finding a good JVC I’Art 27″ beast.  It’s a tube TV from the latter days of CRT production, with S-video and component inputs, and like most CRTs it’s super-heavy.  Once wrestled into place, though, the desk motor does all the hard work of moving it about.

The next piece of the puzzle is shelving, of which there are endless solutions so long as you keep the width at 39″ or less to fit comfortably between the legs and the height in the 18″ range for decent airflow, space for consoles like the Dreamcast with a lid that flips up, and to account for standing the Wii upright.  That’s not quite enough space for a PS2 to be upright, but that was never a good idea in the first place, leading to potentially scratched discs, so maybe it’s best not to do that.  With a decent set of shelves there’s plenty of room for any number of consoles, and an old multi-switch with several S-video inputs and a single output takes care of the rest.  Cable management, of course, is anything from a tangled nightmare to work of art, depending on your patience, but spending a few bucks on anything from zip ties to hair ties will make it much nicer back there once you’ve gathered everything into a tidy set of bundled cords. 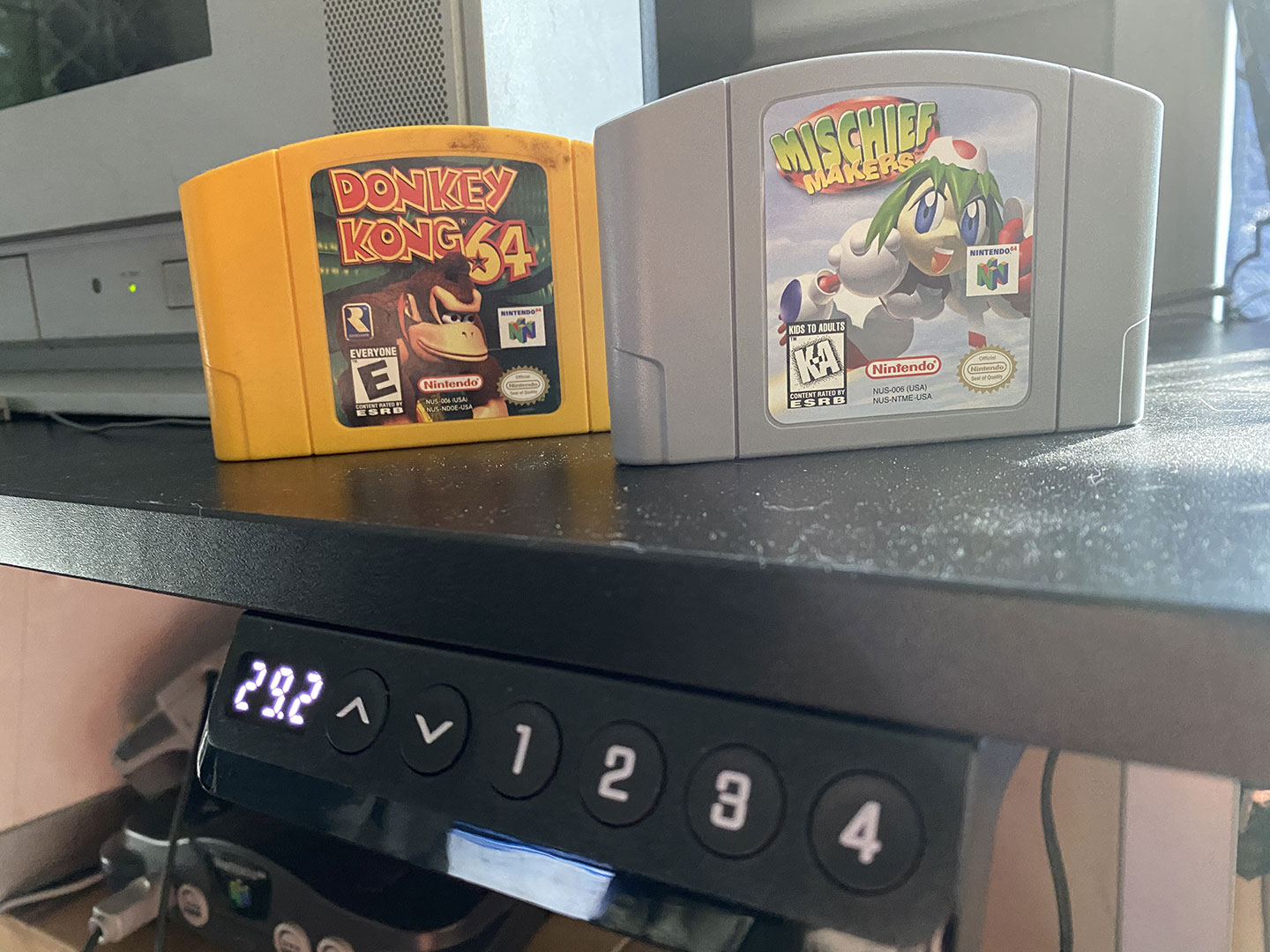 Finally once assembly is complete it’s time to put the Victor DC840B through its paces, and I’ll admit that ninety percent of the time that involves leaving it at the lowest level while leaning back in a comfy chair.  The other ten percent, though, is arcade time, with various types of shooters in specific making good use of the standing options.  Light-gun shooters are the first and most obvious, seeing as they play best with a screen at arm level, but if you’ve got an arcade stick and a platform to place it on, then Capcom’s Dreamcast library practically justifies the effort of setup all by itself.  Standing up to game does a surprisingly good job of aiding in focus, as anyone who’s played an arcade machine can attest, and it really is better for the back to alternate periods of sitting and standing no matter what style of gaming you prefer.  A standing desk is a surprisingly effective accessory for gaming, and while I went the classic gaming route, there’s no reason you couldn’t use it to hold a high-end monitor designed with rotation in mind so that all the Cave goodness of the Xbox 360 could be seen in full tate-mode glory.  I’ll admit before I got the Victor DC840B I hadn’t considered the possibilities of this type of desk in home use, but now that it’s become the foundation of a new gaming center, it seems like the best solution to a problem I hadn’t realized existed.