How long will this post-Souls era last? Whether you were enamored by what FromSoftware had crafted during the first-half (or so) of this decade or you’re simply aware — though not particularly in awe — of the Japanese studio’s take on action RPGs, needless to say there have been plenty of studios thereafter wishing to capitalize on that appreciation for real-time combat, intriguing (possibly open-ended) exploration and a sense that everything, from attack patterns to lore alike, is there to be discovered. Many have tried over the past five years; From too have broadened their approach with stand-alone IPs aiming to take both gameplay and aesthetic in completely different directions. But it’s safe to assume that a vast majority of attempts have either fallen by the wayside or simply haven’t quite matched the pedigree that Miyazaki and co have so often orchestrated both critically and commercially. Just what will it take for an action RPG to not only rival such heights, but more importantly, be considered enough of a success that it can stand on its own two feet without — once more, as I’m sure you’re well aware — falling ill to that pitiful of comparisons: “…it’s like Dark Souls.”

The answer may well be simpler, though a touch weirder, than you might think. Over the past few years, developer Experiment 101’s take on the evermore-popular sub-genre, with Biomutant, has been making the rounds at several conventions and show-floors alike. It was E3’s turn this time round, following its appearances at Gamescom and PAX alike — nearly two years after the project was officially announced — and as it has done in the past, Biomutant delivers an odd affair of anthropomorphic creatures amidst a semi-ruined world. Not post-apocalyptic you’ll be pleased to hear, but it’s clear the ruined, dirtied industrial sites and blackened scorches where mounds of oil litter the land mean this world is far from normality. And yet this is perhaps a fitting place to start with and one of the reasons why Experiment 101’s take on that grander, contemporary action RPG feel is so intriguing to burrow one’s self into. 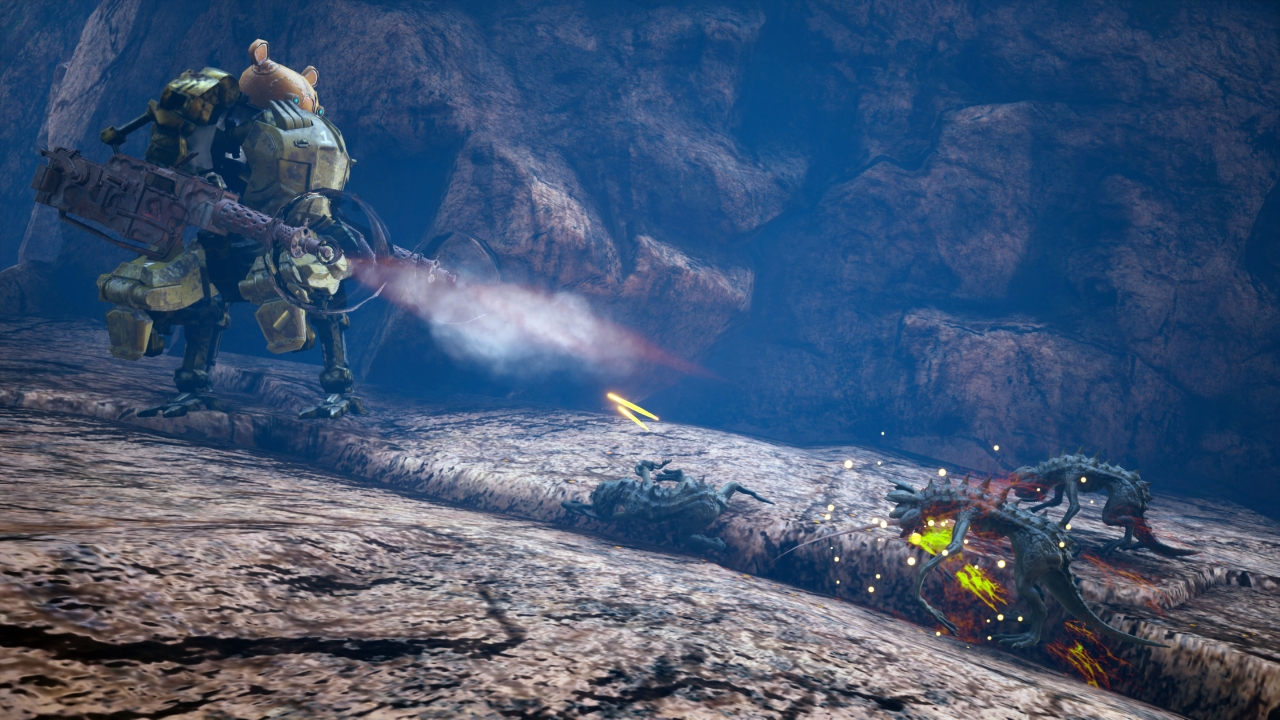 As noted, Biomutant doesn’t go the atypical route of a player-character slowly-but-surely making sense of the world around them. Piecing together why such a once-prosperous/possibly-utopian world crumbled in such a fashion. There are suggestions to some past era here, but the game’s take on ruin is more akin to something like NieR: Automata — floral nature in its many shades of green, melding with the gritty, hollowed-out semblance to some technologically-competent period of yonder. The former, as a result, gives Biomutant a welcome jolt of artistic vibrancy. Even amidst the high-pace antics of its combat, where a player’s self-created mutant-creature fends off a group of other similarly-oddball foes with their own weapons and strategy to match. While one could essentially lump these designs together as mere animalistic — albeit, animal-like with a greater degree of intelligence — the game carries with it that children’s story-like semblance of innocence. Albeit one twisted, turned upside down, by the premise on show — a world on the brink of collapse, the planet’s great world tree suffering due to corruption from an emerging, once-sealed away poison.

Hence, where the abundance of oil and Biomutant‘s counter-aesthetic — the blackened, waste-like quagmire that dirties its environments — comes into play. More importantly, the plot with which weaves together the to-be-expected grand boss battles and branching open world, complete with side quests and NPCs alike. NPCs that, strangely enough, run off a karma system of sorts; the player-character given the option to side with one of the many tribes present in the world of Biomutant. Optional quests opening up as a result of increased relations and built-up trust between yourself and the many characters littering the surroundings. While it’s hard to comment on the extent, or even the very existence, of this alleged mechanic from the developer, what can be noted is the way Biomutant‘s combat feels less like your typical action RPG flavor of attack-dodge-attack pacing and at points tends to step into almost hack-and-slash territory. 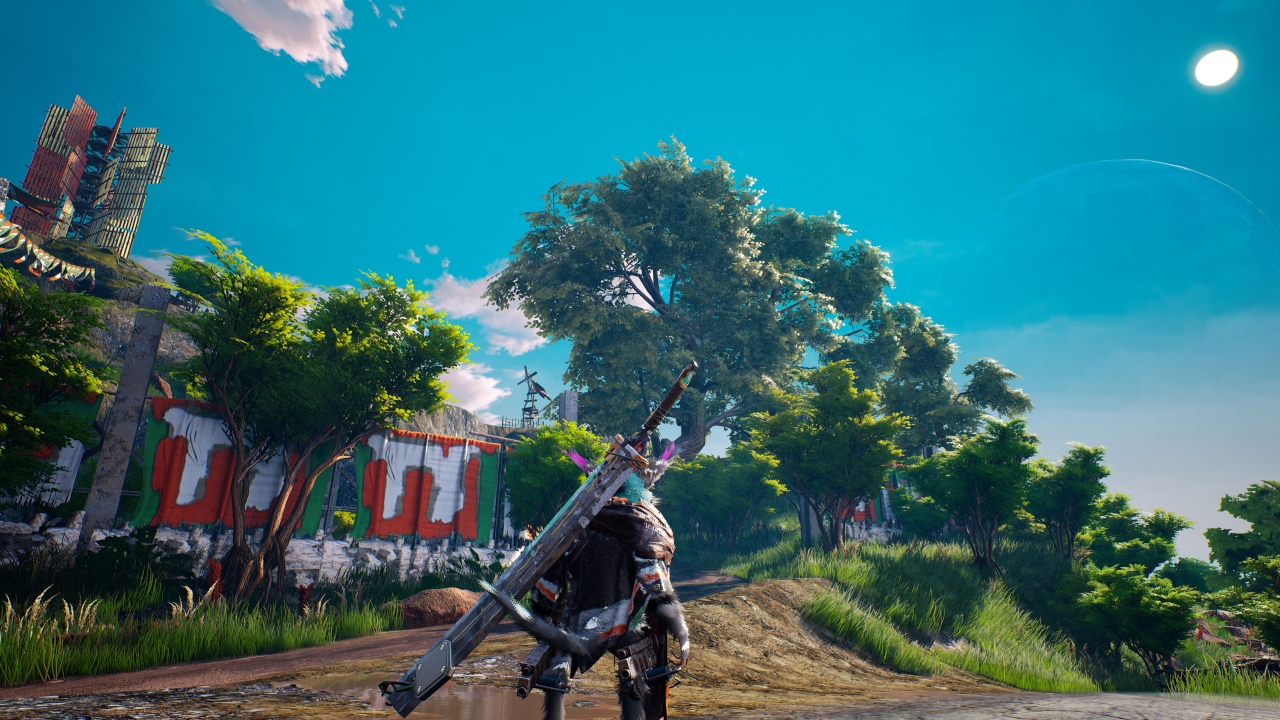 The player-character’s dual firearms serving as long-range support alongside the more trustee melee weapons which, naturally, deal far more damage and are evermore crucial when taken down the many big-bad’s littering the land. The way Experiment 101 put emphasis on this though — making sure players still use their melee weapons, rather than simply spamming projectiles, despite firearms’ feasible cool-down period — is minor, but crucial. Enemies gradually recuperate their health; the amount is small, but sufficient enough that mere bullets alone prove fruitless. There’s still the necessity to dodge and defend one’s self against incoming attacks, but Biomutant‘s flexible maneuverability, coupled with its refusal to simply follow the formula of close-encounters defined by mere attack patterns, in a way feels liberating. Liberating in the sense that the openness of particular environments and the flexibility of your character’s altered move-sets and abilities can be further explored. Again, the developers claim that player-characters will “mutate” over-time and gain differing skills depending on the build they’ve set, but it’s hard to judge based on one solitary, twenty-minute demo.

Even so, Biomutant‘s appreciation for light-heartedness and the notion that not everything needs to be so discretely gloomy and/or as oppressive an aesthetic is a welcome one. To not be so fixated on hitting home the concept that something isn’t quite right with the world and instead presenting something that indeed feels like some twisted picture-book tale with a heavy amount of rough edges added to it. The fact that one brief segment finds you piloting a mech in which you’re given the option to customize it to the point of having the head shaped like a duck. This kind of unusual presence should, in theory, work against the game, but if anything, Biomutant sort of gets away with its brief incursions into the baffling and the ridiculous. 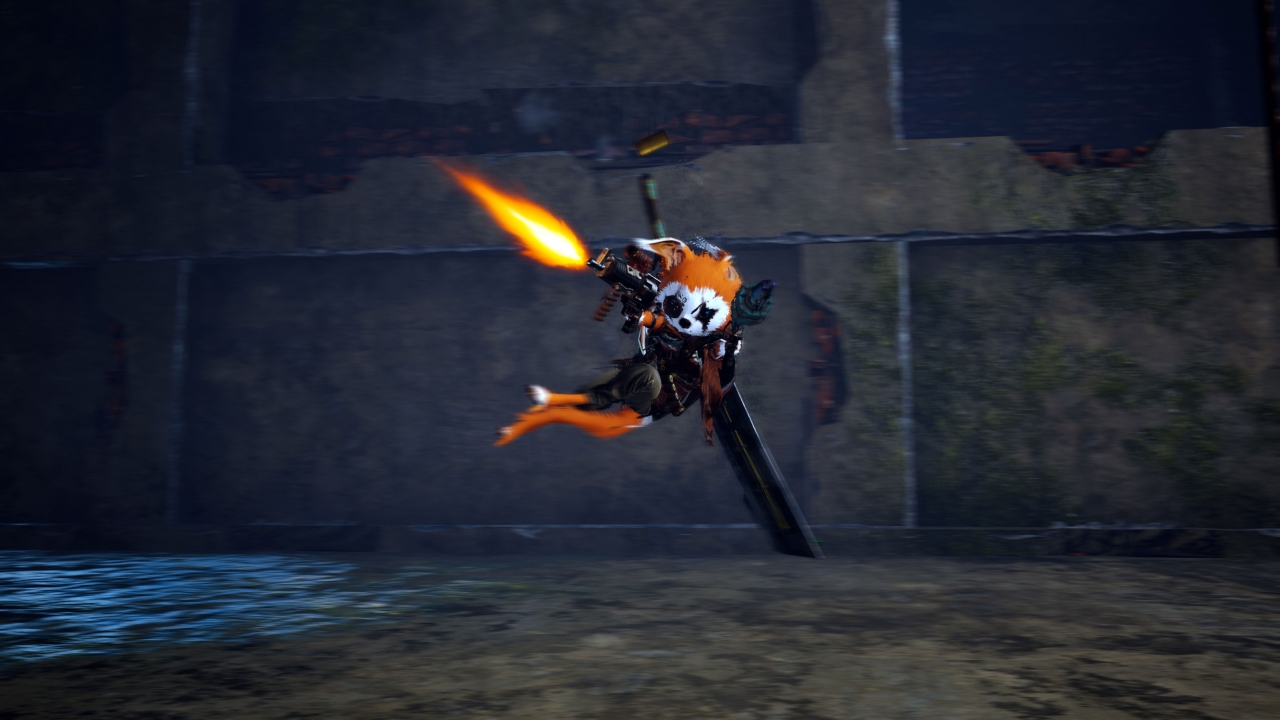 I haven’t even touched upon the end boss battle that has you, at one point through some scripted set-piece of sorts, trying to escape the bowels of a creature to avoid getting dramatically ejected through the beast’s rear end. No, I’m not joking — it ends in an automatic game over if you do. But this is exactly the kind of odd, head-turning take on action RPGs we sorely need. One that can back up its ludicrous antics and surprisingly-lush spin on disaster, with a gameplay loop that is bold in presentation, but intricate enough to work out and keep invested in from a gameplay standpoint. Biomutant may be odd, it may be unusual, but it’s one of the more interesting takes on this sub-genre both aesthetically and mechanically. One I so desperately want to play more of and hope Experiment 101 can see through to fruition.