It feels like it’s been a while since we’ve heard from Terry Cavanagh. The acclaimed indie developer delivered amazing work with VVVVVV and Super Hexagon earlier in this decade, but since then he seems to have been happy just making smaller, experimental Flash titles. But now he’s back with his next major game, Dicey Dungeons. And in contrast to the platforming and arcade action of his best-known work, his new game is a turn-based roguelike RPG. And given the challenge level of the aforementioned games, I suppose a roguelike was inevitable. But as seen in a playable demo, Dicey Dungeons appears like it’ll be equally fun as well.

The setup is that Lady Luck has kidnapped a group of adventurers and is now forcing them to compete on a twisted game show. Oh, and she turned them all into giant dice, and they have to battle using dice in order to perform attacks, defensive maneuvers, spells…pretty much anything needed to survive. Because Lady Luck is just that committed to games of chance. So immediately, there’s a bit of humor at play here, backed up by fun and colorful graphics and character designs. It’s the type of RPG where you can battle sick porcupines and walking stereos, straight out of Earthbound. So there’s a lot of charm here, which is more than welcome. 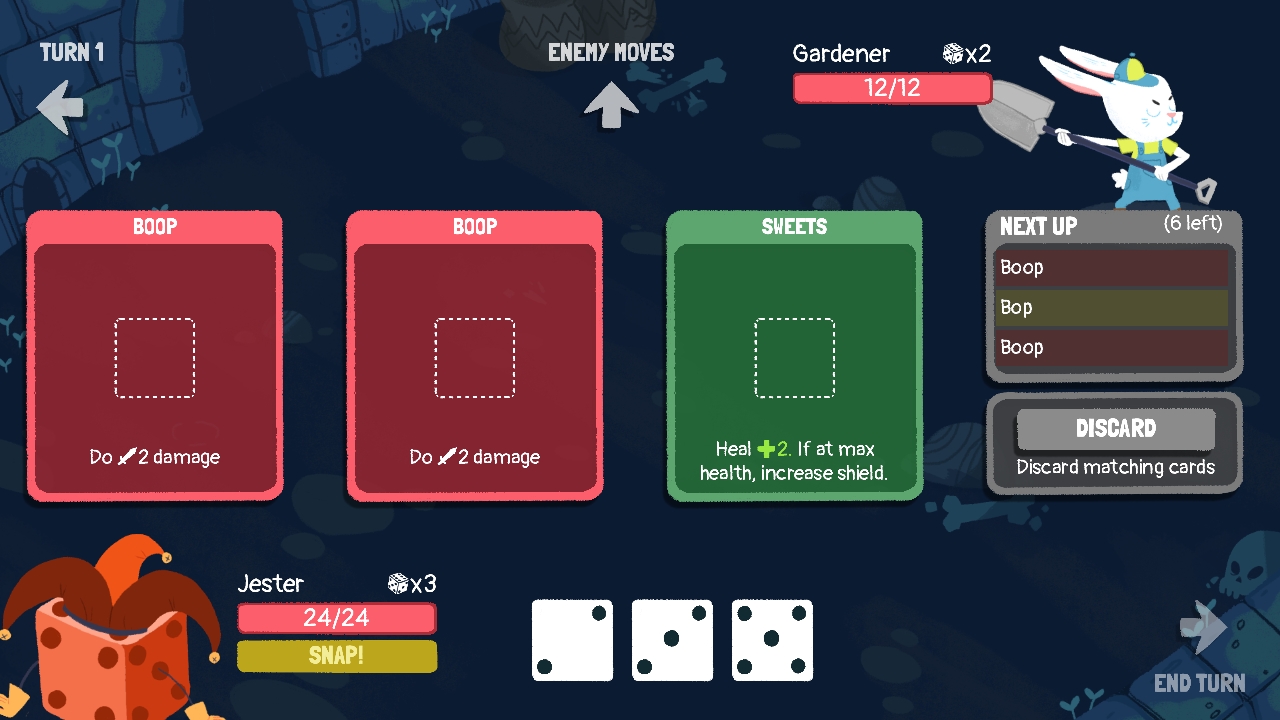 Jumping in by playing as the warrior class, which seems like the “default” option, combat immediately presents itself as unique, yet easy to learn the basics of. Each turn, we rolled three dies. The field shows actions you can take, each with a slot for a die. Some were straightforward, like an attack where the value of the die determines the damage dealt. Others got trickier when they had requirements, such as accepting only even numbers for an attack, or needing a maximum roll of three in order to deal poison damage. After you take your turn, your opponent whips out their own unique attacks, and as you take damage, a limit break meter fills up. When ready, you can use it to let loose a massive skill. Certainly an innovative and enjoyable combat system.

In between battles, it was mostly business as usual, though. You walk around a map, trying to take a the best route, eating apples for health and risking it all for treasures. You gain new skills from them, alongside purchasing them in shops, and managing them in your backpack in order to create a proper loadout. Naturally, the more powerful spells take up more space, though, so the challenge is in creating a balanced lineup. After getting into a few skirmishes with a few tough foes and leveling along the way, I cleared the first two floors, which ended the demo.

So after wrapping things up, my initial thought was “well, that was fairly challenging, if just an introduction to the game, but it’s not like it was that hard.” And it was at this point when I was back at the title screen that I was informed other classes would be notably more difficult. In particular, the witch would be more challenging to play as, if not the most challenging. So after hearing that, I clicked on the witch, ready to go again. “How much harder could it be?” I thought. 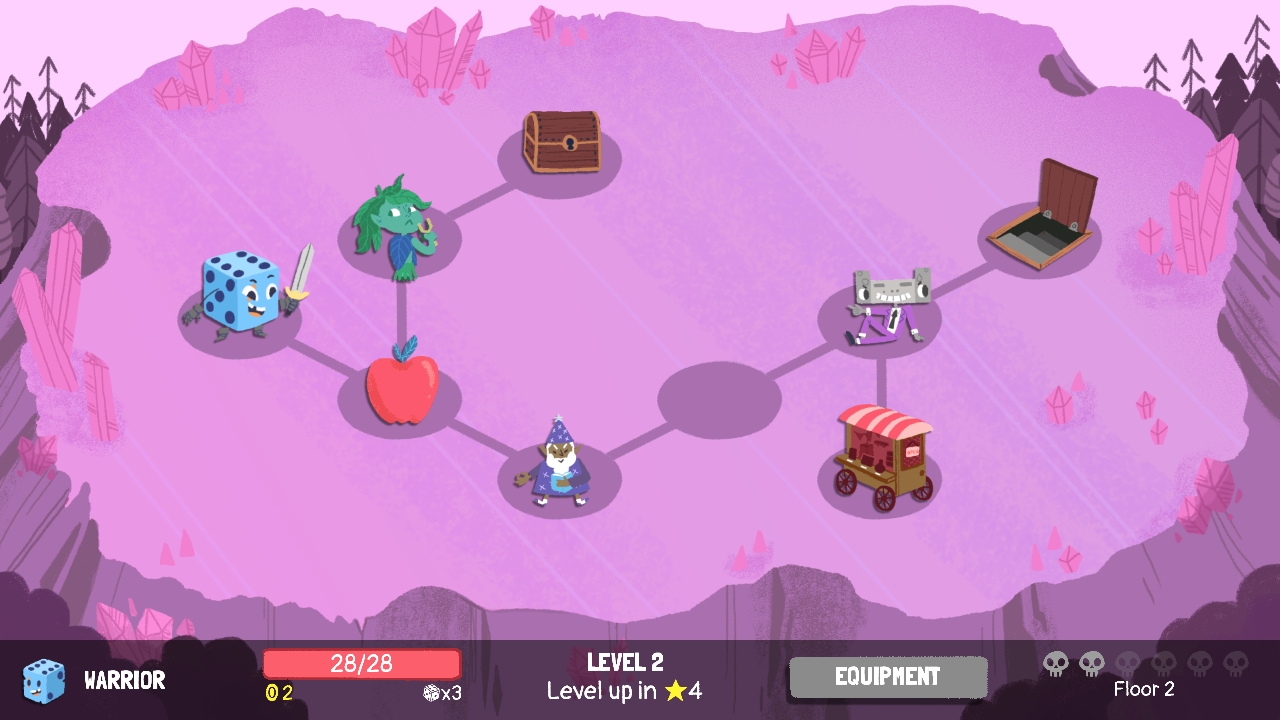 The witch’s gameplay is so drastically different that it practically reshapes a huge chunk of Dicey Dungeons’ gameplay. The reason for that is because unlike the warrior, the witch doesn’t just directly attack opponents. No, they cast spells instead. When you learn a new spell, you assign it one of the six die numbers and place it in the spellbook. And in combat, you can only access spells by offering up a dice roll with that number, at which point it gets added to available abilities you can use for the rest of the battle. And you can only have four spells on the field at a time, so adding one from the spellbook means replacing one.

So now more than ever, strategy is required in order to succeed. After all, let’s take another attack that requires an even-numbered die to activate. What happens if you have other spells on the field that you need even numbers for as well? Do you attack now if ready or use the even number to summon a spell to the field that may be more useful next turn, while risking things by potentially prolonging the battle? We can only have four spells on the field, so should we plan what goes out there? Use multiple spells? At the very least, if all goes wrong, you can fling dice you don’t use for one damage each. 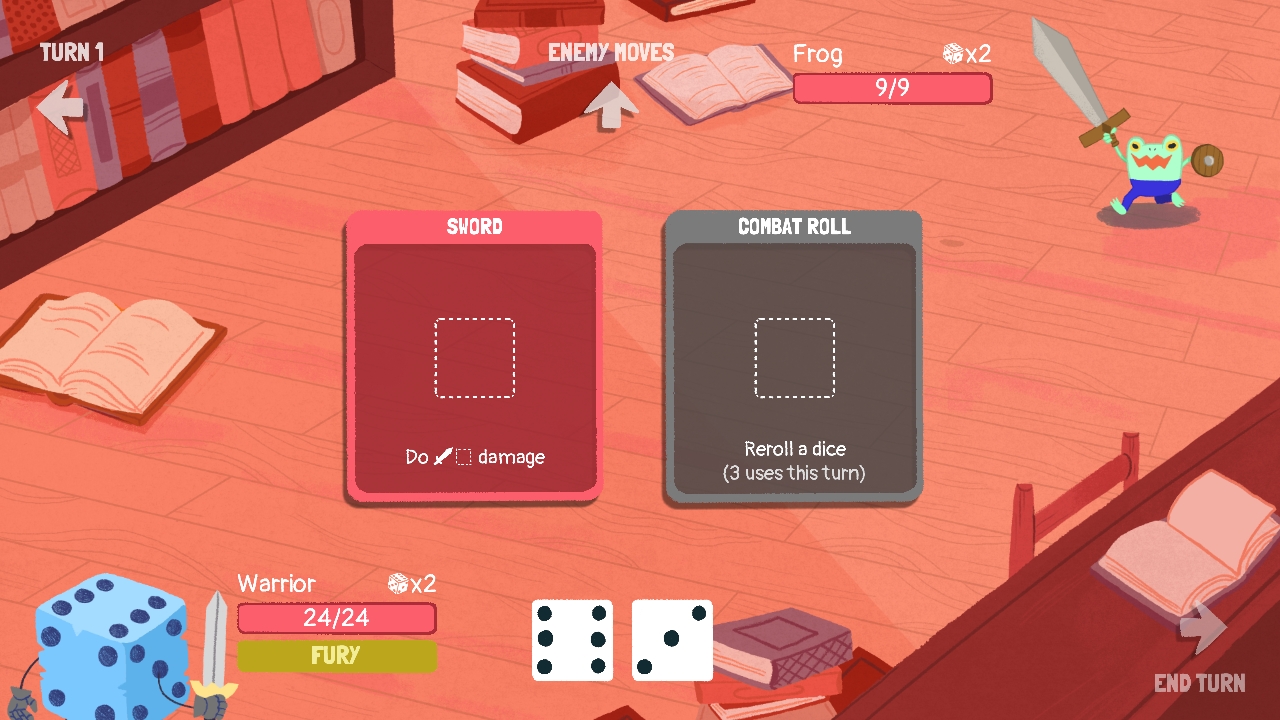 And keep in mind that you still have to factor in luck as well, of course. You may have gained killer spells uncovered along the way and assigned them slots for through six, but a bad set of rolls can still leave you helpless. Luckily, among all classes, there are ways to try and shift luck in your favor. You can have chances to re-roll a die each turn with the right skills, for one. And you have potential abilities that can add or subtract from a die’s number as well. And considering the witch’s method of attack, you need to make use of skills and limit breaks that can allow extra dies as well. It’s a setup that requires clever thinking, consideration of the odds and a strategic mind…which I evidently didn’t have at the time, as unlike with the warrior, I perished during this second run. Whoops.

But this failure didn’t turn me off of the game. After all, it was tough but fair. Instead, it left me wanting even more, especially since there were four other classes (thief, inventor, jester and robot) to play as, each with unique touches of their own. So between the terrific challenge, clever dice-based gameplay and pleasing aesthetics and designs that can easily lure you in, Dicey Dungeons is easily shaping up to be yet another hit for Terry, and we can’t wait to get addicted to it when it comes out later this year for PC.