It’s nice to come to a game shown off at E3 with expectations not so much raised, but lifted out from its initial mire of former deflation. The potential for a Yooka-Laylee sequel from Playtonic was always going to be a welcome wish; the 2017 original, while not perfect, got many elements right in its rekindling of 90s platforming in three dimensions. So when it was revealed prior to E3 that the follow-up would instead take things in a slightly more linear direction — namely in the form of a 2.5D side-scroller predominantly, admittedly there was a slight (if not insignificant) decreasing of excitement as to what Playtonic had to show. You know the kind of decrease I’m talking: that deliberately-delayed “……oh…” response when what you get isn’t entirely what you were hoping for. But this new project poses an interesting debate: is this even a sequel, the sequel in fact. Even by the studio’s own admittance, sitting down with the team at this year’s E3, when the notion of Yooka Laylee and The Impossible Lair being a sequel was suggested, it was a less-favored term. A spin-off perhaps? 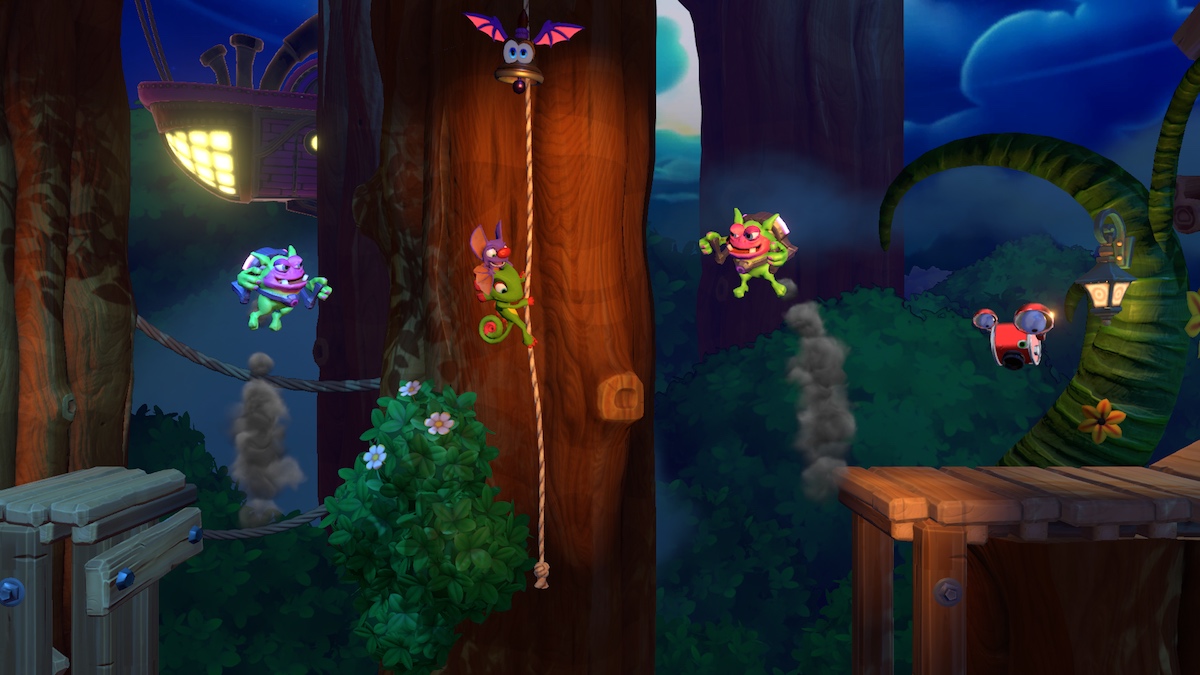 Whatever manner Playtonic or even you yourself may want to perceive this year’s follow-up (actually, let’s go with follow-up for the time being), right from the off, it’s clear that Playtonic have decided against simply retrofitting the experience from two years previous. Of course, Yooka and Laylee’s combined efforts play a role in navigating through the many side-scrolling levels that wind up, down and around perilous traps which, at the very touch, can put you at a disadvantage. One of the ways in which this is composed, is the fact that there are no health bars now. Instead, getting hit sends Laylee off in a scurried wail in which you have a limited time to reunite the two characters. Fail and Yooka is left all on his lonesome to finish the level. This of course leaves you at a disadvantage in numbers obviously, but the absence of your trustee bat cohort means certain abilities are disabled; levels can still be finished, but it means optional/hidden areas are now closed off.

Instinctively, there are call-backs to the original Donkey Kong Country trilogy on the SNES and when asked if these kind of titles — alongside other such side-scrolling/linearly-led staples like Crash Bandicoot — served as a source of inspiration or at the very least understanding on how 2.5D platformers can function, Playtonic concurred. But of course, the main hook — and one which marries its large, explorable 3D worlds and interconnecting hub to progress through — is of course the titular “impossible” lair standing imposingly at the game’s center. In much the same fashion that Hyrule Castle stood at Breath of the Wild‘s geographical center, the idea is that hypothetically, this grandest of level can be beaten…but it’s, as you may have already assumed, incredibly tricky to do so. As such, Yooka and Laylee must complete as many optional stages, on the side, so as to rack up an accumulation of helper bee’s which act as health points inside The Impossible Lair. Finished ten levels? Then you can try and face the climax, knowing that you’re allowed to get hit ten times. The Impossible Lair itself sadly wasn’t shown, so it’s hard to tell how hard or genuinely challenging this climax may end up being for those looking for a high risk affair. Regardless, it’s nice to know Playtonic aren’t confiding in the classic: do so many levels per themed-world. 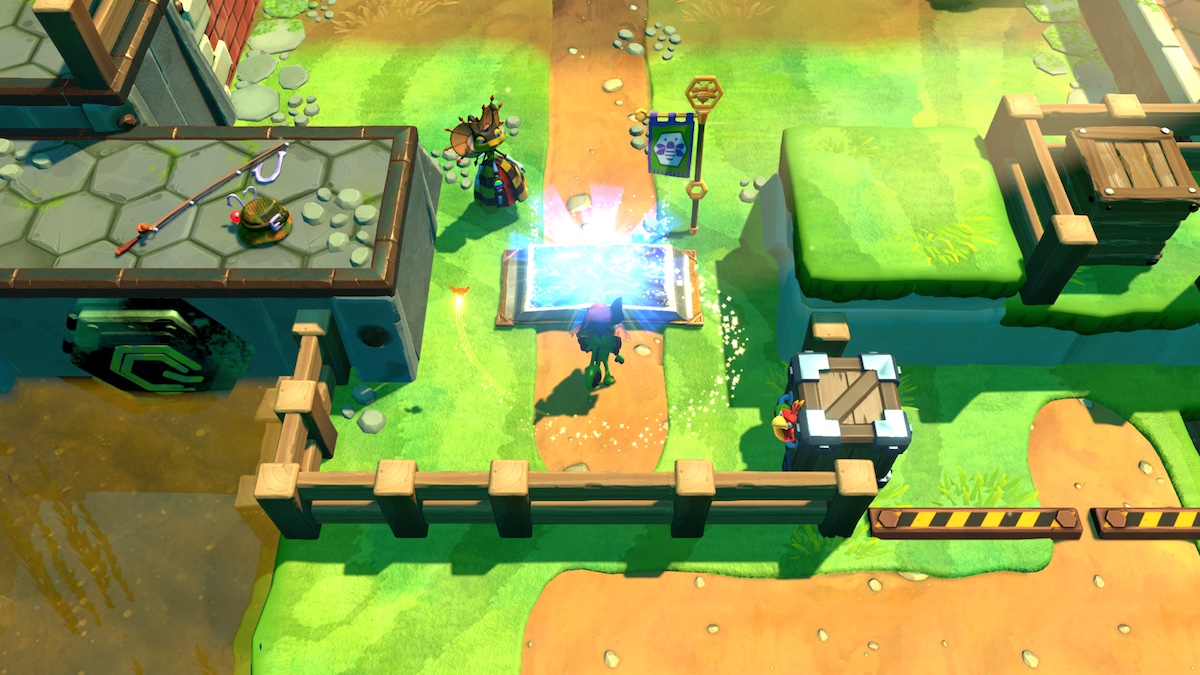 That’s not to say that The Impossible Lair doesn’t deliver its stages and levels in as much the same kind of structure; levels divided up based on environmental themes. Primary, side-scrolling 2.5D levels with the traditional A-to-B objective, accessed via an overhead view of what you may consider a “hub” of sorts. Not unlike Mario’s non-Odyssey endeavors with 3D World, only here, players can indulge in some additions puzzles and branching paths. Meaning that The Impossible Lair isn’t just about completing a set number of levels in a strict linear order. Yes there will be cases where unlocking a puzzle in the overworld is necessary to progress, but as Playtonic explain, the intention is to offer flexibility and even optional challenge for those eagerly looking for it. The team even showed a later unlock which, when enabled, adds an additional “harder” mode to certain levels. Again, it’s hard to comment on something not directly demonstrated, but The Impossible Lair is making the effort to deviate itself from the convention of simply beating stages, only to never revisit them.

To some who enjoyed the original Yooka-Laylee — and/or feel enamored by the sheer charm and personality 3D platformers can so wonderfully craft — the shift away from previous ideas can seem baffling at best and disheartening at worst. And you’re right for [initially] perceiving this as an ill-fit when one of the things that shone in Yooka-Laylee was its rekindling of that quirky, comical touch in its characters, its dialogue and the explorable delights with its level design. Admittedly, some of those elements — namely the conversations, wherein a few fourth-wall breaks and cheeky jabs were never too far away — are in lesser supply, and for obvious reasons. Dialogue in among the side-scrolling levels naturally wouldn’t make sense; Playtonic’s approach is less Banjo-Kazooie/Spyro the Dragon and more towards those games that prioritized the precision and execution of platforming. 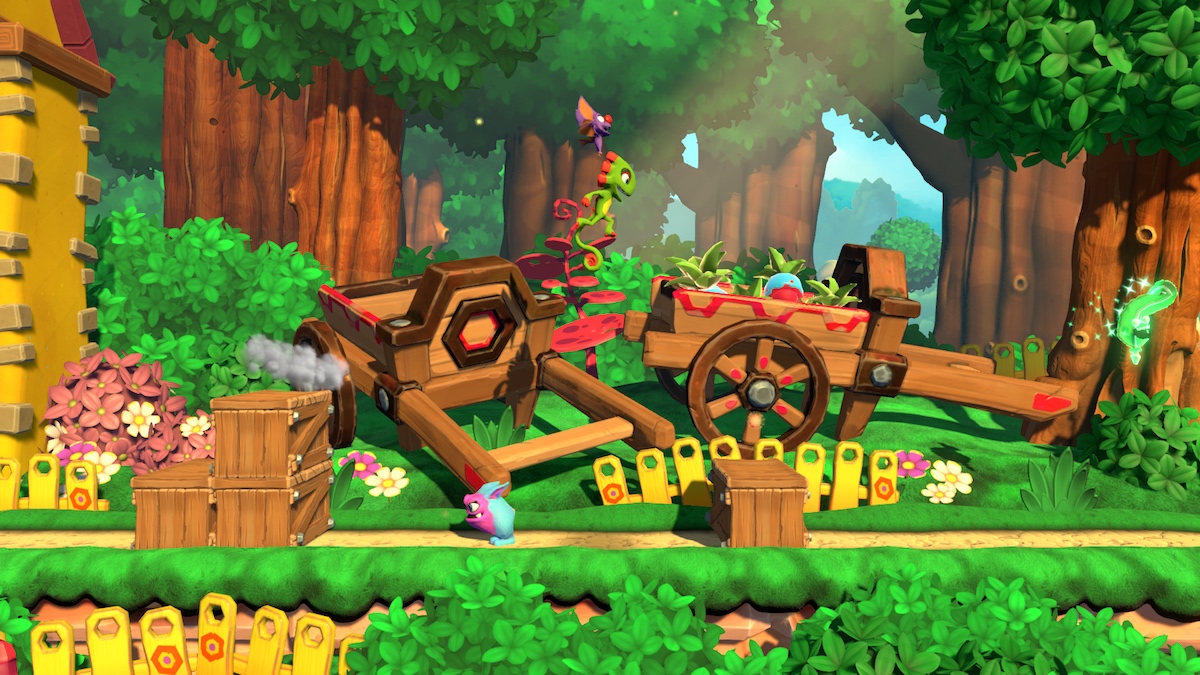 Just as there are hidden collectibles and tucked-away secrets that only the sharpest of eyes (or perhaps those willing to focus in on the game’s use of parallax) will notice, so too there’s a familiar rhythm to the way these levels can be completed. This no doubt will especially be useful for speedrunners or players who simply revel in beating something as fast as possible and surprisingly, it’s something Playtonic acknowledge when asked about the nature of level design for these kinds of people. As such, The Impossible Lair — as stark a contrast its structure and presentation may be from its 3D starting-point two years prior — should in no way be shunned for the direction Playtonic are deciding on here. If a game like Tropical Freeze can be heralded for its style, its substance and just how addictive the nature of completing challenging platforming encounters can be, than surely this game should in no way be criticized just for going the way of a 2.5D side-scroller.

There are of course plenty of questions left unanswered — most pressingly: just how hard is the titular level itself and can that supposedly-ominous task be enough to warrant a deep trek through all the content? But as someone having gone in with reservations and dare-I-say concern for what the studio were intending, it’s clear Yooka-Laylee and the Impossible Lair still leverages a charm and personality that made the original a likeable-enough throw-back. How effective it’ll truly be when fed through the linearity of side-scrolling levels — similarly a nostalgic rekindling as 3D platforming was — could very well be the game’s true deciding factor. Yooka-Laylee and the Impossible Lair is planned for launch later this year across PS4, Xbox One, Switch and PC.