While gameplay can never ever be dethroned in the hierarchy of video game priorities, that’s not to say other elements such as visuals, story and of course music can’t make it an interesting tussle for the top. In the rarest of occasions, that fight may even settle into a form of co-existence in which two — or maybe more — factors can find a kind of equilibrium. One where all elements can shine brightly, yet the player’s experience is still all the better because of it. As we know from past classics like Rez and recent triumphs in Tetris Effect, when visuals and sound work in tandem with the gameplay mechanics on offer, the feeling of something being “just right” is as much emotive as it is logical. A game that clicks because of its gameplay is one thing, but a game that manages to entertain, maybe even enthrall with its presentation is something else. Sayonara Wild Hearts, least from the opening series of on-rails antics on offer at this year’s E3, falls into the latter category and the result is nothing short of fantastic. 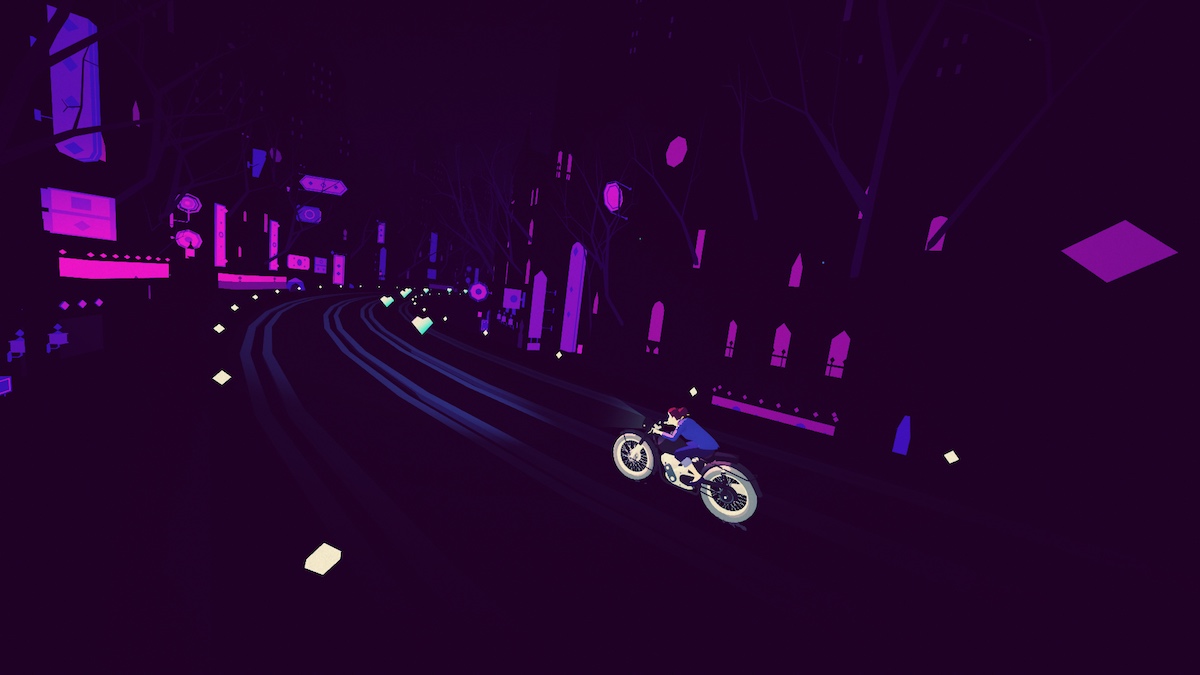 But the game could so easily be mistaken as a too-artsy affair in its not-so-cryptic allusion to adolescent subject matter. The main protagonist, The Fool, flung from the reality of her contemporary bedroom and into this hyperactive, sporadic affair of geometric abstractions of city streets, valleys and Thumper-esque chutes flying past at almighty speeds. To the game’s credit, though, the themes work to feed off the appeal of its core gameplay, which in essence plays like a three-lane on-rails set-up. Avoid obstacles, collect gems and above all else, enjoy the ride down the game’s triad of winding pop music-fuelled voyages that can so easily shift between the abstract and the relatable. Very much like Rez, Sayonara does a great job at giving everything that crescendo-building edge — players knowing very well that each of its stand-alone levels/stages are gradually building towards something.

Whether that’s something as simple as an almighty burst of speed, a chaotic mix of sharp turns — which will test precision in the most avid of completionists; optional golden tokens cleverly tucked away in-between perilous traffic and hidden routes alike — or a sequence that encourages you to rack up as high a score by constantly moving from left to middle to right lane alike, Sayonara Wild Hearts may well want to flaunt the upbeat vibes of its pop soundtrack, but thankfully the variance of its gameplay mechanics are what keep the ride enjoyable throughout. This is no clearer a case when the game introduces what may be considered (least for the time being) rival groups of sorts — characters with clearly-designated color palettes out to ruin your perfect, no-death run with QTEs and bullet-dodging sequences alike. 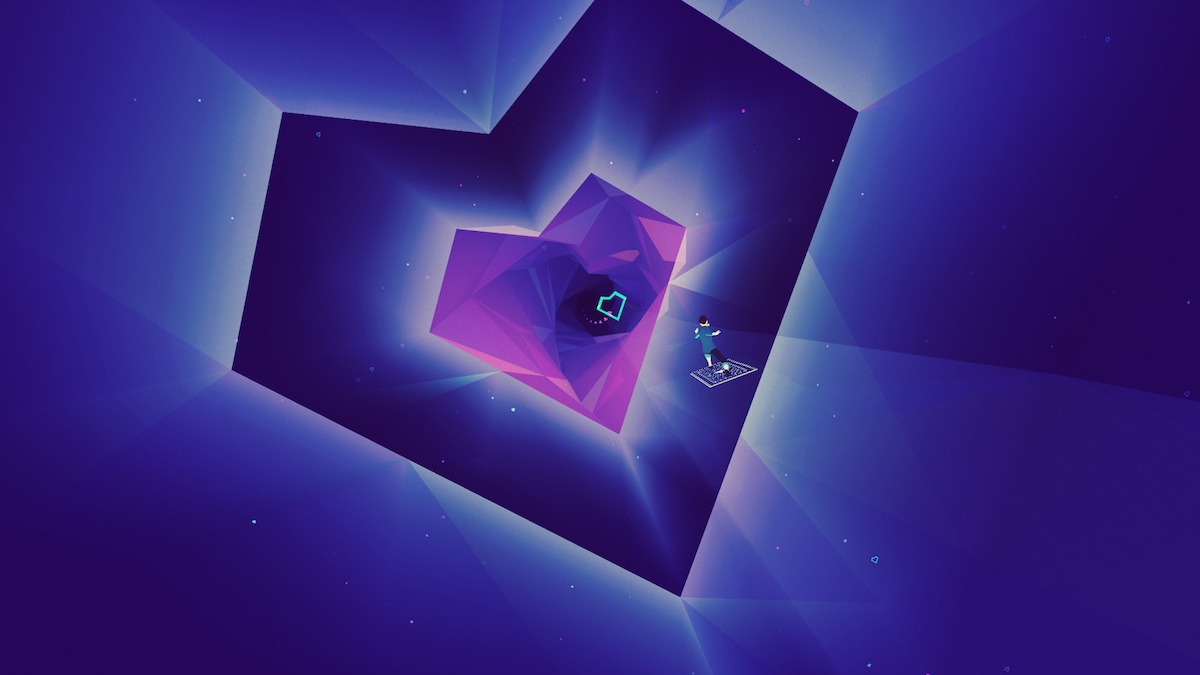 Yet Sayonara Wild Hearts manages to side-step the frustrations that quick-time events often entail. Namely the way that button presses are always in time with the soundtrack’s tempo — a on-cue hit scoring you more points than one just slightly out of sync. But so too, the way this is woven into the artistic presentation of things — characters, for whatever reason, descending into gymnastic and ballerina-style dance-offs only to return to bikes once more to engage in side-scrolling bullet-dodging in one instance. Of course, taken at face value, this makes no sense but the surreal nature of Sayonara’s premise and the focus on the flow of things is what makes it work. It isn’t shy of mixing things up as well, even withholding the manner and intensity at which QTEs will be supplied. I’d be lying if I said there weren’t a couple of instances that caught me off-guard, yet this alluring players into a false assurance is what keeps proceedings feeling a touch more fresh and intriguing to see unfold. Above all else, the music is surprisingly catchy for a set-up that, no doubt, will have players entirely fixated on the path laid out in front of them. And perhaps where all the collectible gems and multipliers are specifically.

Perhaps it’s the way these levels are orchestrated and the fact that there are moments where a track’s bridge or chorus section has a similarly-drastic shift in design that allows such sounds to come to the forefront and not get too lost in the momentary madness. Not unlike Rez where its progressively-built up tracks feel like crucial milestones or pivotal points in a player’s progress. If anything, Sayonara tends to also sit neatly alongside Thumper’s more “rhythm violence” intensity — particularly with the speed and pace of things, but also in its insistence to adapt quickly or die trying. That kind of contradictory vibe then — between the harmonious tone of its music and the antagonistic rush of its visuals and gameplay — lend the game an intriguing hybrid of rhythm games’ most accomplished feats. 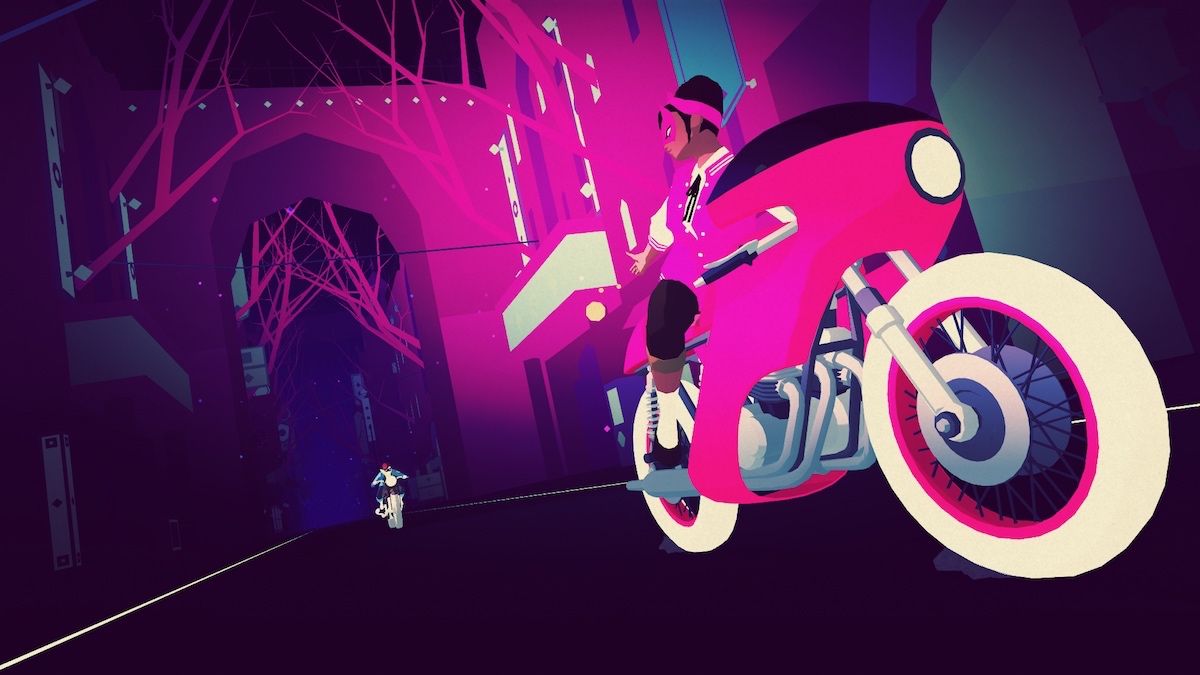 And all this is merely encapsulated within the game’s first assemble of levels and first “gang” with which our hero, The Fool, must duke it out with in a surreal, deadly QTE dance-off. But the absurdity and indeed the presumed revealing of its subject matter don’t do anywhere near enough to detract from what is a wonderful first array of on-rails, survival/score-accumulating affairs. Only SteamWorld Quest has had a similar, unassailable effect on latching onto an idea and impressing immediately with the concept and structure it’s trying to present. In much the same vain, Sayonara Wild Hearts’ efforts should not go unnoticed. The question remains as to how its narrative will end up — an allegory on contemporary, teenage anxieties or an on-the-nose scampering for credibility minus any nuance or unique spin alike? Even so, minus the concerns on a tale that may well be pushed to the background, Sayonara Wild Hearts’ joyous use of pop-infused color, rhythm and unexpected thrills, is one to look out for when it launches later this year.