Whether it’s headsets or surround sound systems, anything is better than using your TV’s built in audio. You’ll never get the same bass or level of quality you’d expect when you go with dedicated brands, but while surround sound systems cost hundreds if not thousands of dollars for good setups, headsets help meet in the middle. While there are those that don’t like to wear headphones while playing single player or even multiplayer experiences, the quality of headsets have improved substantially over the years, to the point they’re a must for every gamer, especially if you live in an apartment. We’re here to take you through what are the hot items for this holiday season, and there’s quite a few that made an impact.

For Those Looking for the Best Sound Quality: Turtle Beach Stealth 520 / 420X 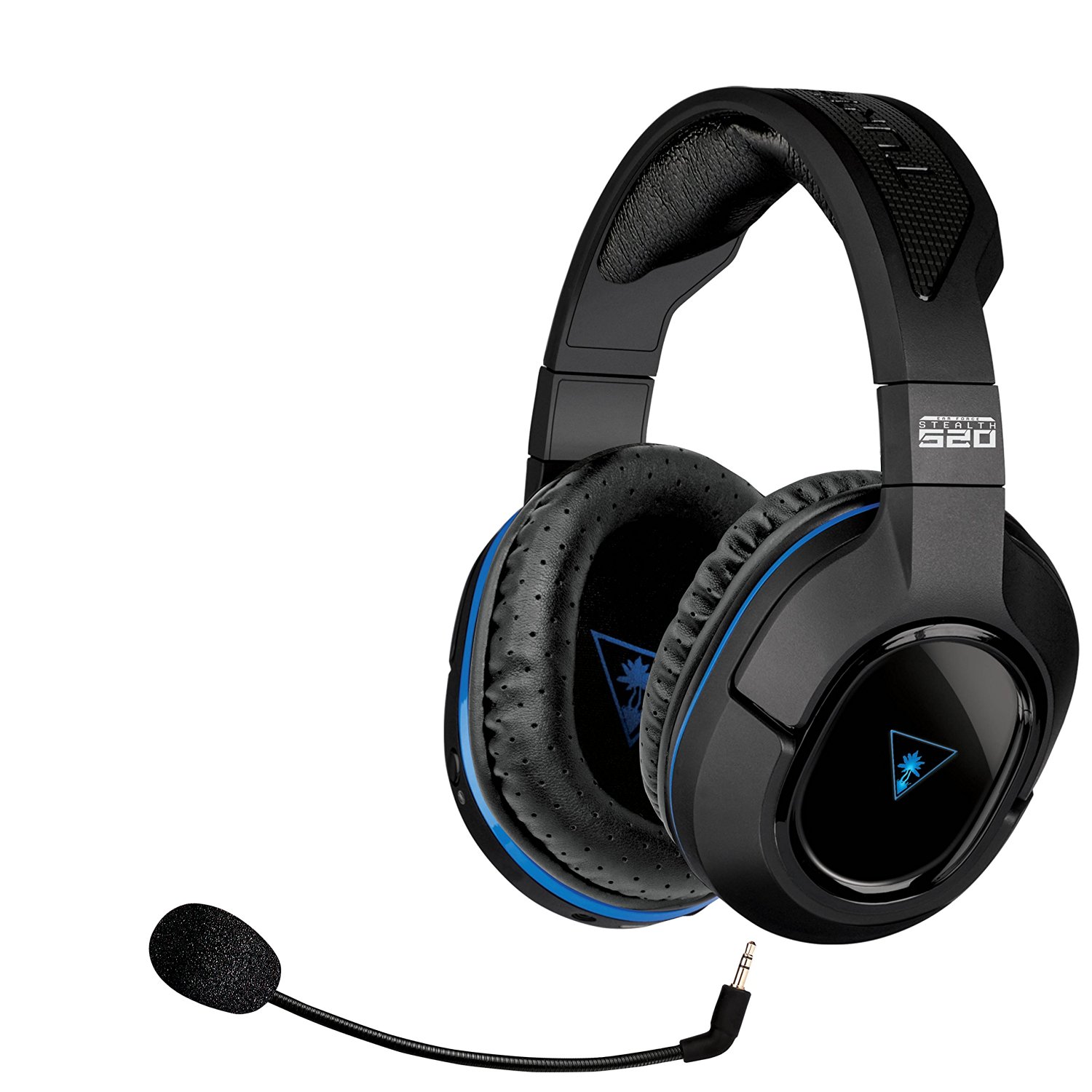 We can’t talk about gaming headsets without talking about Turtle Beach and they have a solid showing for 2016.

The Stealth 520 is aimed towards PlayStation users while the 420X is for Xbox One owners, and the bizarre thing about this is that the 420X is more expensive. Why this is strange is because, while both are wireless headsets, the Xbox One version lacks DTS 7.1 surround sound and a dynamic chat booster. Fortunately, though, they both output phenomenal sound quality. Among all the headsets listed here, the Turtle Beach Stealth 520 and 420X have the crispest audio quality you’ll find, with a bass that’s booming.

Unfortunately, while this is great, this is still the Stealth headset. The biggest problem with the 520 and 420X headsets are their size as, while they can easily be adjusted vertically, the core design is far too small. As someone who has what’s considered an average, maybe a slightly larger head than most, it took a while for the feeling my skull was being crushed to dissipate, and even then, going to other headsets shows a huge difference. If you have a smaller or skinnier head, you’ll most likely won’t have any trouble with this, but for everyone else, it will leave a bad first impression, especially with the minimal amount of cushioning around the earphones and headrest that’s given.

While the Stealth 520 and 420X will run you a little more than the competition, it’s more than worth it as it contains the best sound quality compared to everything listed here. If only Turtle Beach could somehow find a way to increase the comfort level, then it would be the perfect package. For those with average to larger heads, it might be better to go with Turtle Beach’s Elite line of headsets.

For Those Looking for Style: Tritton ARK 100 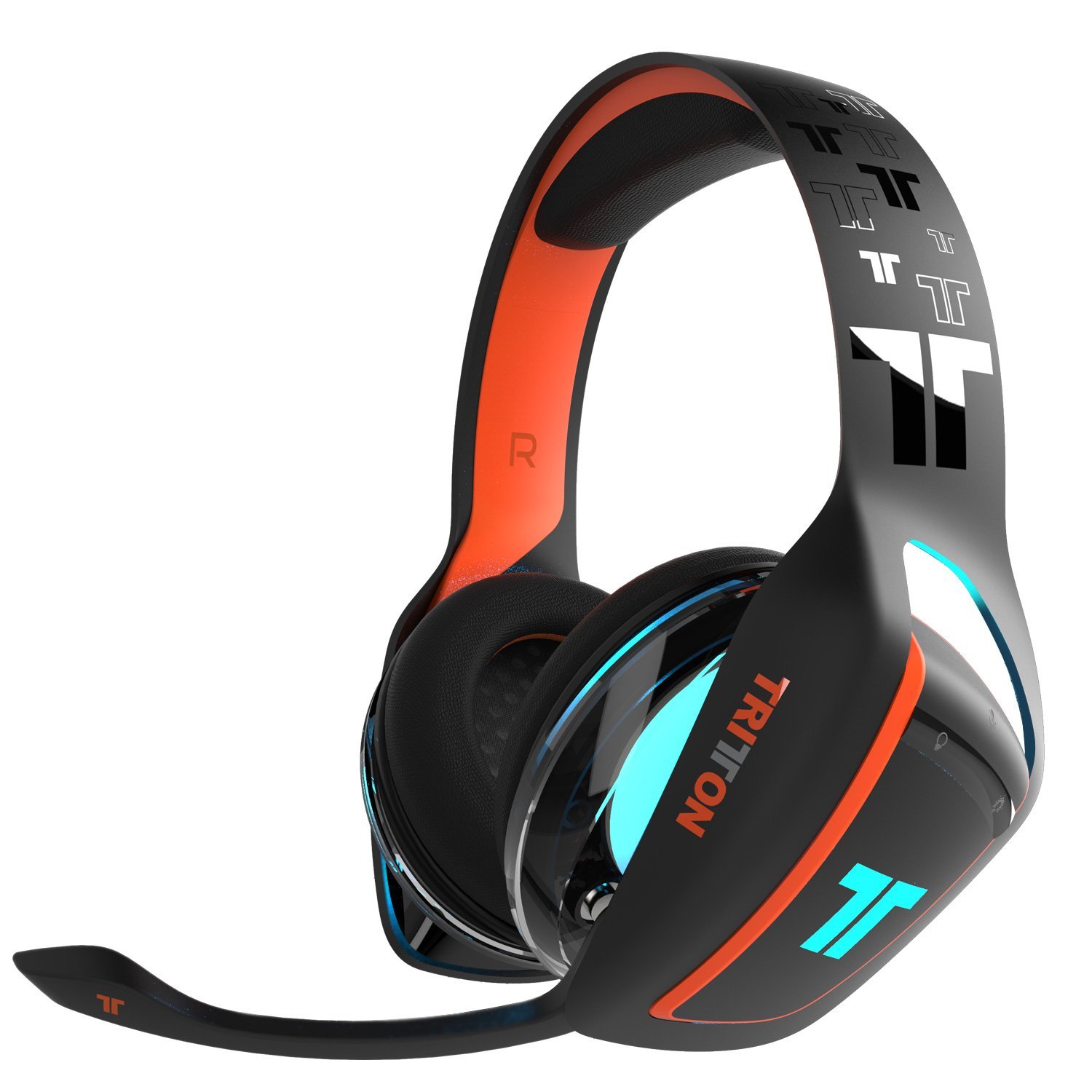 Tritton is one of the longer running headset developers, and rightfully so as they’ve had some of the best hardware coming out the last generation. Their latest Ark 100 models may not revolutionize anything, but it aims to please with its colorful design and flexible comfort levels.

Despite being a wired headset, the Tritton Ark 100 requires batteries for the LED lights spread all across the headset. They definitely add a certain flair, but we wish there was an option to use it when the batteries run dry.  The design is also a personal preference as, instead of going minimalistic or with a general form factor other manufacturers are aiming towards, the A100 ends up looking like something out of the mid-to-late 2000s. Maybe that’s something for you, but it’s definitely an acquired taste.

The best part of the A100 is without doubt actually putting it on. While it could go with a couple more cushions on the headrest, as it’s just one medium sized bar on the top, the earphones are incredibly plush, creating a more than comfortable time for its wearer. As for sound quality, it’s about what we’ve come to expect from stereo headphones, although there are three EQ modes to cycle through. Unfortunately, even with Bass Boost, the bass isn’t all that remarkable, never getting to the levels where you feel truly immersed in a 2.1 setup. We also do wish the microphone was detachable, but we’re just nitpicking at this point.

For the price, the Ark 100 are a steal if you’re fed up with minimalist designs and want something a little flashier.

For Those on a Budget Looking for Comfort: PowerA Fusion Gaming Headset 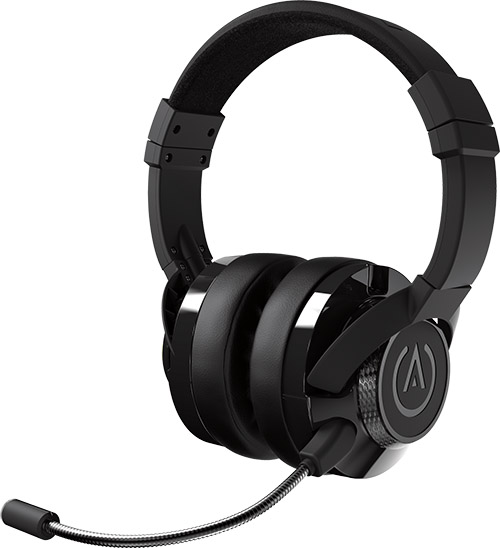 One of the newer manufacturers into the gaming audio space is PowerA, and what they brought to the table with their first over-the-ear headphones is quite impressive.

The Fusion complements the company’s Fusion Xbox One controller, which was made to offer a number of the functions the Elite Controller has. From a design perspective, the Fusion is very solid as it’s just large enough for a medium to large head, but not too big for those with smaller domes. The cushioning on the top of headrest isn’t going to win any awards, but the earphones more than make up for it as they’re quite plush. It even has a fantastic function more companies should experiment with: the circular housing on the outside of the ear pads act as a volume knob. No longer do you have to find a small scroller wheel or one of many physical buttons on the side of the headset; you just have to turn the large knob that houses one of your ears.

Other than that, though, there’s not much to this headset when compared to the Tritton above. It does have a 42-inch long braided 3.5mm audio jack, which more companies should deploy for their headsets, but there aren’t too many options. The overall audio quality is also adequate, although the bass levels aren’t all that impactful and can be on the lower side of the scale.

The big appeal to the PowerA Fusion headset is its price. It may not have all the bells and whistles you’d expect from a gaming headset, but for its initial price of $49.99, it’s an appealing package.

For Those on a Budget Looking for Wireless: PDP Afterglow AG 9+ 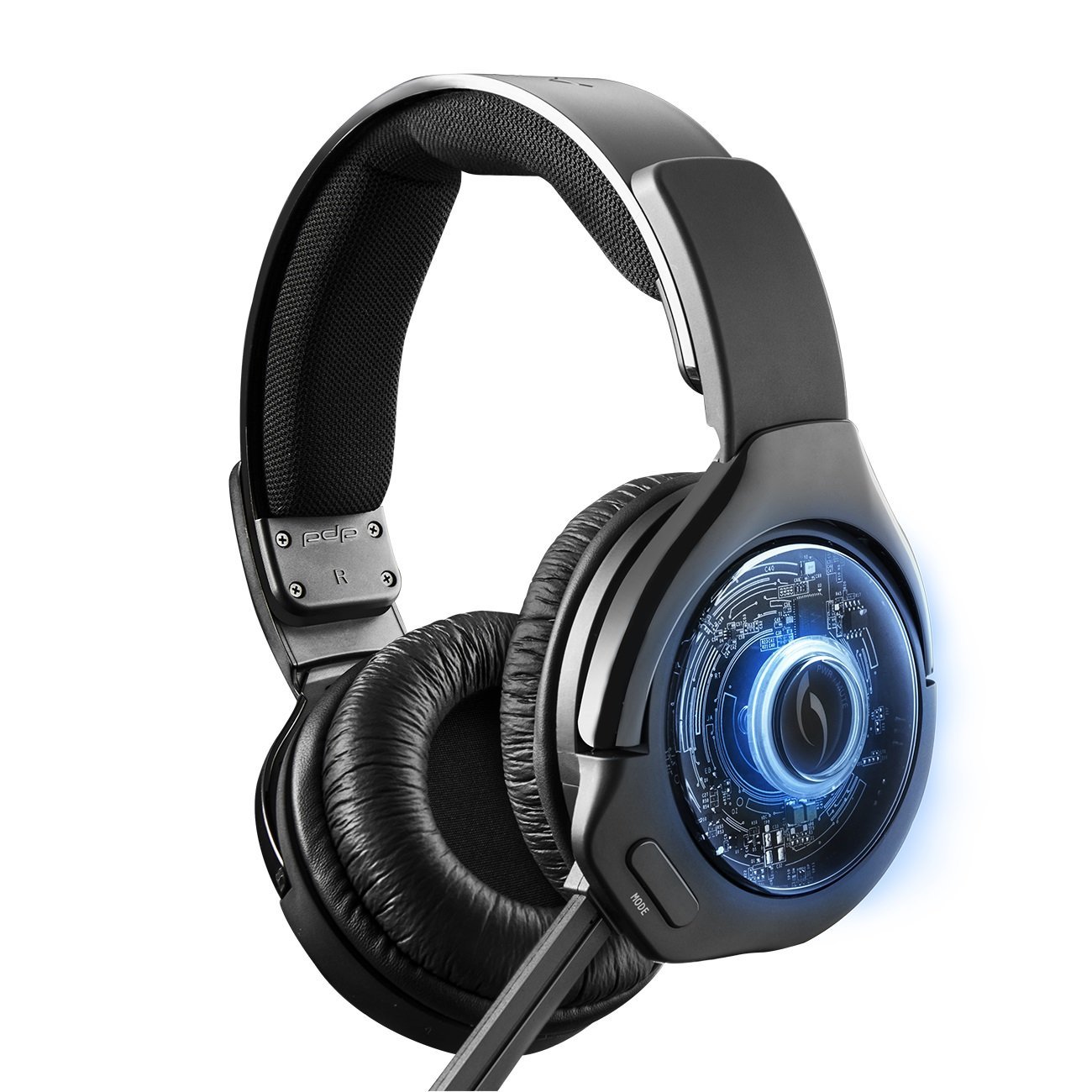 We can’t go through a console gaming headset selection without mention PDP. This is a company that offers a plethora of third-party accessories to better suit the player’s needs. Whether it’s the surprisingly well designed controllers to remote controls, PDP has a lot to offer.

Another field PDP is very much in tune with is the headset business, offering a wide variation of wired and wireless models. While we’ll get to the haptic wired LVL5 soon, the Afterglow AG9+ is an affordable wireless headset that gives players more bang for their buck. Containing 50mm drivers and transmits wireless via a USB dongle, the AG 9+ is one of the better solutions for gamers.

Among everything listed in this article, the AG 9+ is the easily the most comfortable headset available. Firstly, it comes with two colossal cushions on the headrest, while carrying that trait forward onto the earphones. This feels like you’re putting a cloud on your head; that’s how much PDP focused on comfort among everything else. It’s also well designed, with easily adjustable headrest and a fully removable microphone, which everyone should make standard at this point.

When moving into sound quality, the AG 9+ falls a little behind. Even though it has two different modes, Pure Audio and Bass Boost, they don’t add too much to the overall experience. Even though the headset does output relatively crisp audio, the Bass frequencies could use some work. That’s not to say the AG 9+ is bad by any means as it’s more than capable of meeting most players’ audio needs, especially considering it’s $30 cheaper than the best (audio quality) headset on this list, the Turtle Beach Stealth 520.

In the end, this is an incredibly well designed headset that won’t break any walls in the sound department, but certainly will feel nice wearing.

For Those Looking for a Cheap Thrill: PDP Afterglow LVL 5 & Titanfall 2 Stereo Headset 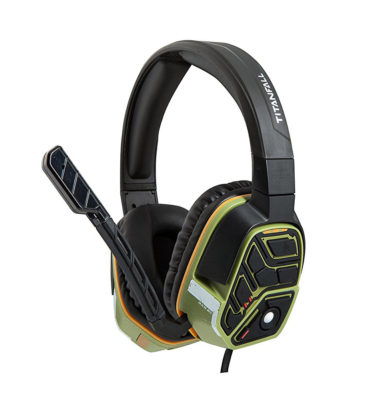 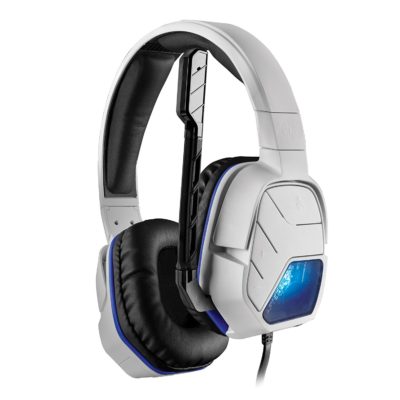 Looking past the AG 9+, we have the LVL5, a cheaper wired version that still gives players a lot of for their dollar. It’s not your run-of-the-mill stereo headset, though, as it features one of the more fascinating features.

Sound quality is actually surprisingly solid for the budgeted price LVL5 holds, with the biggest bonus being the haptic drivers (which need batteries to operate). This literally vibrates your headphones based on the amount of bass that’s being outputted, and it feels great. It gives the headset that extra “umph” needed to make it an appealing purchase.

Unfortunately, the biggest problem with the headset is its design. It should be noted that this is a $60 headset, and for that price you’re getting a lot, but there’s something that certainly brings it down: the darn thing just won’t stay on. This is an on-the-ear headset that’s easily susceptible from just sliding down your head. While the haptic drivers certainly give it a boost in quality, they will also boost it right off your head if you’re not laying down or holding them in place. Fortunately, the head rest is one of the better we’ve seen, although the quality is slightly less impressive than something like the AG 9+.

We also got to check out the Titanfall 2 themed model, which is incredibly well designed, even coming with a stylized light indicator when the haptic drivers are on. The only criticism with this is that the buttons on the side of the headset can be very difficult to identify as they blend in so perfectly with the design. There are multiple indents from the mechanical design, so spotting the what’s clickable can be a challenge.

In the end, we came away impressed with the LVL5 for its affordable price, even though it can be a challenge for them to stay on your head. The haptic drivers also give it a uniqueness not seen in headsets of any kind, especially for $60.