The Evercade is both the latest and coolest handheld on the market. Instead of focusing on modern triple A titles, it looks through gaming history and brings many classic games to new carts. With that said, not everything available for the Evercade is strictly retro. The Mega Cat Studios – Collection 1 cartridge showcases ten homebrew titles published by Mega Cat Studios. These are games that work on old NES/Genesis/etc systems, but were released far after those systems’ heyday. Read on for a look inside details on this cartridge’s set of ten titles to see if this is a must buy for you. 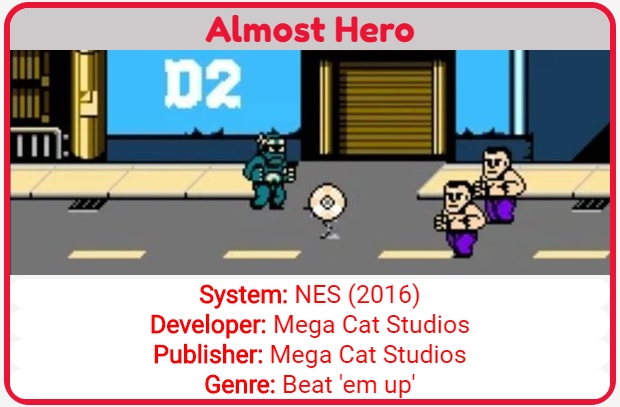 The beat ’em up genre is packed full of awesome titles, but they’re not usually parodies of themselves. Almost Hero puts players in the role of a ninja hopeful. Does our ninja protagonist hope to save the world? No, they’re just seeking out bonsai seeds for a man that sells artisanal bonsai trees online. It’s a silly set up for a goofy game. Mechanically, Almost Hero plays like most side scrolling beat ’em ups you’re already familiar with.

The main difference is that every part of the game is played tongue in cheek. As you beat down enemies, they’ll shout out meme-style quotes. Weapons sitting on the ground include the likes of CDs, boomboxes and even a Furby. Gameplay requires players to embody the speed of a ninja in order to avoid getting pummeled. Expect to do a lot of kicking, punching and jumping to stay safely away from enemy fists. After downing tons of dudes, you’ll accumulate enough cash to buy VHS tapes. These aren’t just for fun — they upgrade the protagonist with improved abilities. 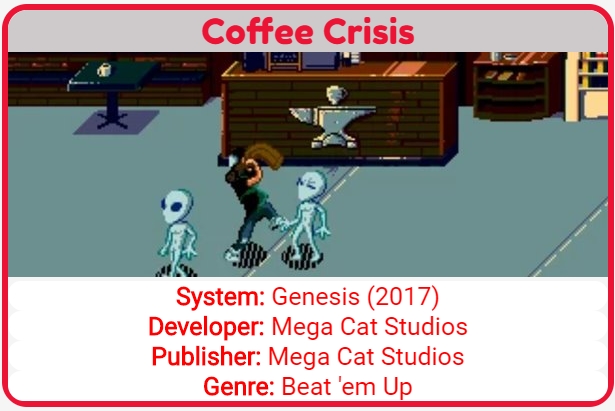 If you’ve not heard of it before, Coffee Crisis is one of the best known releases by Mega Cat Studios. Not only was it produced on cartridges for SNES and Genesis, but it has since made its way onto PC and Nintendo Switch. That’s quite an accomplishment for a homebrew release. What’s it all about? This is a side scrolling beat ’em up starring baristas. Why baristas? Because aliens have invaded and decided to steal our coffee (and wi-fi, and heavy metal music)!

It’s a wacky plot that emphasizes the playful nature of Mega Cat Studios. If you check out some of their other games you’ll feel a similar playfulness throughout their releases. It’s tougher than your average beat ’em up, with a real focus on learning the moveset to take down aliens, bros and even old ladies (don’t worry, they’re mind-controlled) on the streets of Pittsburgh. This game typically allows for two player local co-op originally but not on the Evercade. Fortunately you won’t miss multiplayer too much thanks to the great gameplay and humorous level designs. 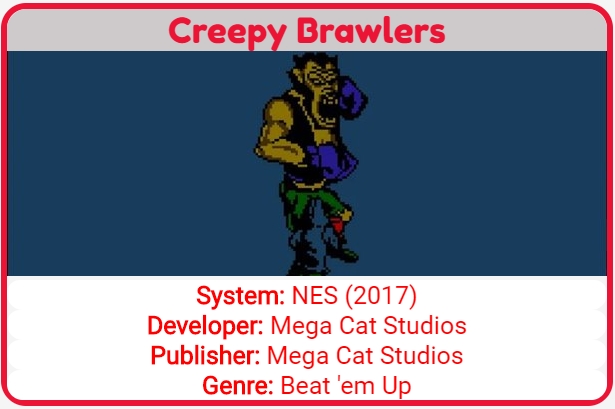 Fans of Punch-Out!! need to try Creepy Brawlers. This title takes the concepts from the famous NES game and turns it into a monster movie-inspired mashup. Players assume the role of a boxer pulled into the world of horror films to fight against a zombie, devil, werewolf, alien and more. Just like its inspiration, each enemy is stronger than the last and features their own attack style (and weaknesses). Even the easiest opponent — a zombie — doesn’t go down as quickly as Glass Joe, though.

If you go through the campaign then you’ll need to survive fourteen fights — a few of which are rematches. There’s also a practice mode so you can choose any specific enemy to fight against. This is a great feature because it gives players ample time to practice on a specific fight rather than needing to play through the entire game for one shot at a challenging enemy. Any horror fan will enjoy duking it out against this monstrous cast of characters. 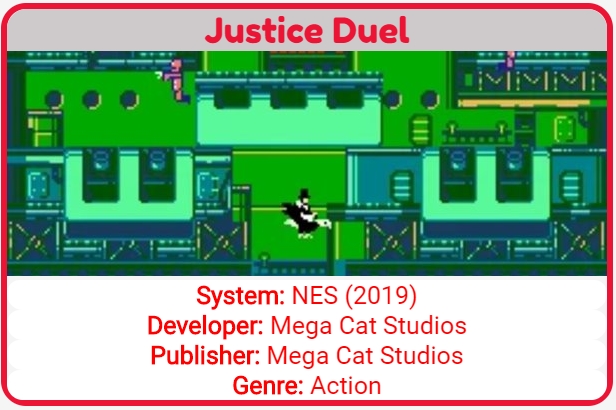 Did you ever play Joust back in the day? If so, then you’ll be able to slide right into playing Justice Duel. This game puts players into the suits of famed American historical figures such as Abraham Lincoln. Players sit atop eagles — how American — and flap around the level to defeat enemies. Cannon fodder enemies don’t have their own eagles, but other historical figures do. It’s when two eagle-riding characters face off that the game feels most like Joust.

Justice Duel takes place on a static 2D plane and throws increasingly more enemies at you over each wave. While you can shoot them down, you can also simply flap up high and pounce on their head to inflict damage. The only negative about playing against CPU characters is they tend to hug the ceiling. This is smart playing on their part, but makes it tougher to perform a successful aerial strike. 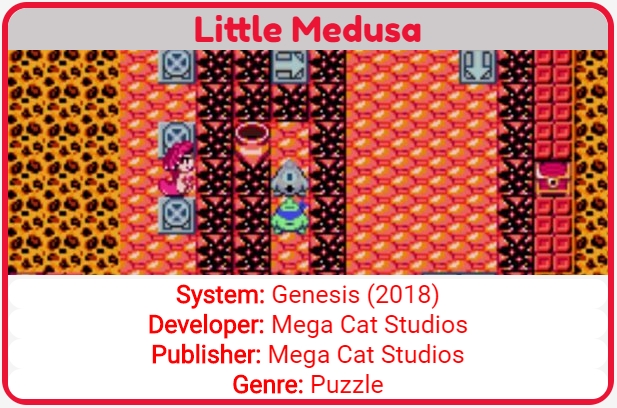 Little Medusa pays homage to the obscure NES classic Kickle Cubicle. Players assume the role of Medusa, meaning they have the ability to freeze enemies into stone. What do you do with the enemies once they’ve become a statue? You can push them around the stage for a variety of useful effects, such as creating new platforms to walk across.

The stone enemies can also be used for other platforming purposes, or to break objects. Enemies are both fast and fierce, so don’t expect Medusa to be overpowered in the least. It’s a tough but rewarding title. The pixel art is wonderfully colorful and all characters are cute. In some ways, it feels a bit like Kirby with how adorable the graphics are. 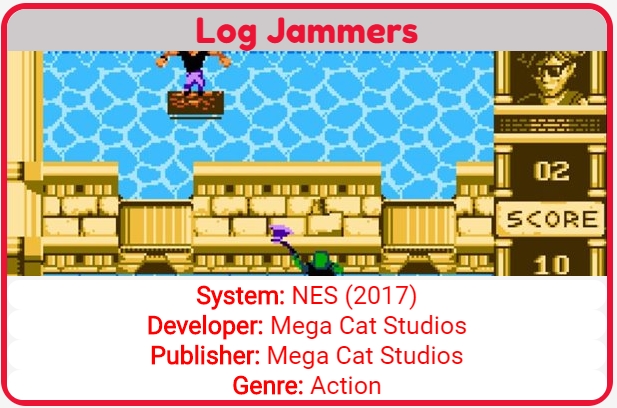 Log Jammers is a title inspired by the Neo Geo classic Windjammers, which in its simplest form, is a more exciting version of Pong. So if you know how Pong works then you can get a handle on the basic gameplay of Log Jammers. In this 1 v 1 title, the player faces off against a CPU character (on non-Evercade platforms you can play multiplayer) from a top down perspective. Each player is standing atop a log which is basically a Pong paddle.

You toss an ax back and forth in hopes of getting it past the enemy. Each stage sets up goals with differing point values and obstructions. There are multiple playable characters and each has their own special skills. One shock of starting this game up for the first time is how fast the enemy moves. They’re faster than is possible for a human player to do (in a controlled fashion). With that said, it’s actually not that difficult to keep up and beat them. 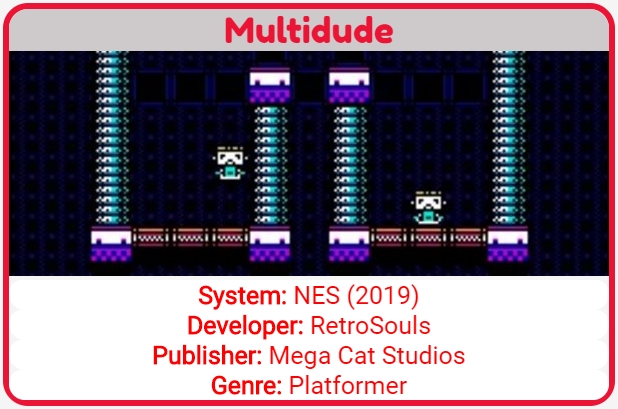 Multidude is a bit of an interesting release on the Mega Cat Studios cartridge. Despite the collection’s title, this is actually a game developed by RetroSouls and not Mega Cat Stuidos. So why is it here? Mega Cat Studios is the company that they partnered with in order to handle producing and distributing physical NES carts.

In either case, this title is a thinking man’s platformer. It’s tough, but not for reasons typical to the platformer genre. Players control multiple robots one at a time in order to unlock each stage’s exit. Each bot has their own special skill and must be used properly in order to complete the stage. Expect to go through a lot of trial and error to beat this game. 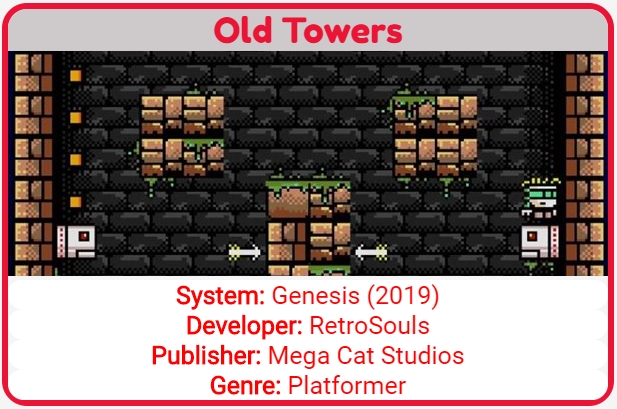 Here we have another release from RetroSouls that was published in physical format on Sega Genesis by Mega Cat Studios. Old Towers is a puzzler that is both difficult and tremendously fun to play. Players are presented with vertical stages full of obstacles, enemies and gold coins. Your goal is to grab those coins while dashing throughout the stage.

The protagonist only moves up, down, left and right and cannot stop moving until he runs into into something. This simple concept makes for easy to pick up gameplay that quickly becomes challenging. Since you cannot move any which way you want, you must carefully chart out a path where you can run and time it to avoid enemies pacing about the stage. 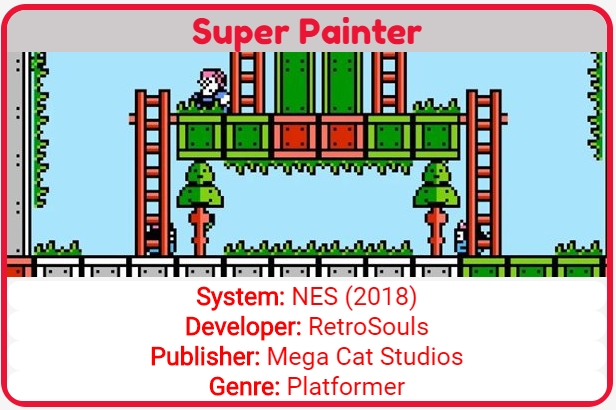 Super Painter is an adorable release originally developed by RetroSouls. It was then published in physical NES format by Mega Cat Studios. The game features a simple concept. Players assume the role of a little dude who paints surfaces by touching them. Your goal is to touch all the grey blocks on a stage in order to make the stage bright and colorful.

There are always enemies trying to stop your progress. Your best course of action is to simply dodge them while painting away. Once all the blocks have been painted, you exit the stage and move onto the next. Despite being simple, Super Painter feels rewarding and fun to play in bursts of a few stages at a time. 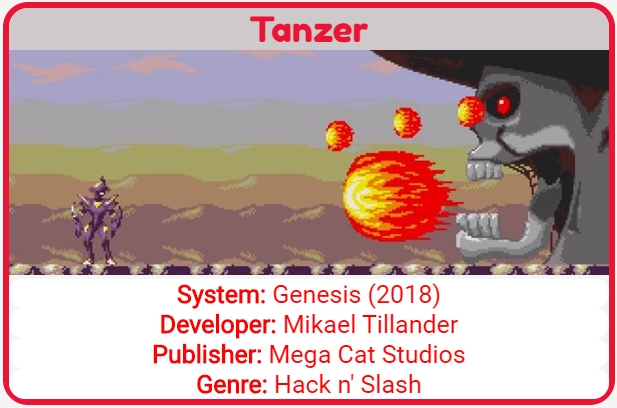 Tanzer starts off with a message that says “All I ever wanted was to… dance.” The main menu then pops up with a dancing character and thumping techno music. If that doesn’t immediately pique your curiosity then I don’t know what else to say. As for the game itself, it’s an action title where players control a superbly cool robot that stylishly hacks and slashes its way through everything in its path with.

At the end of stages, you’re able to apply upgrades in preparation for the next hectic stage. Levels all feature their own unique design and the entire game features an awesome soundtrack. Tanzer was originally Kickstarted by the developer Mikael Tillander before going to Mega Cat Studios for physical production.