The Evercade is a handheld platform for fans of retro games everywhere. This unique system also entices collectors with its physical cartridge system. While the system released with ten cartridges to start, there are more starting to arrive. One of the newest carts is The Oliver Twins Collection. This twelfth cartridge comes with eleven different games — all of which were developed by The Oliver Twins, hence the name of the collection. While this developer duo is not especially well known in North America, they were superstars in Europe. Their egg character Dizzy remains an icon in the region all these years later.

Is it worth a buy for fans? Absolutely, as it brings with it a host of classic games and titles which were only released years after development. Those who missed out on the pure fun of Oliver Twins titles owe it to themselves to try the collection as well. As with every other Evercade cartridge, this one costs $19.99. Read on below for more details on the included titles. 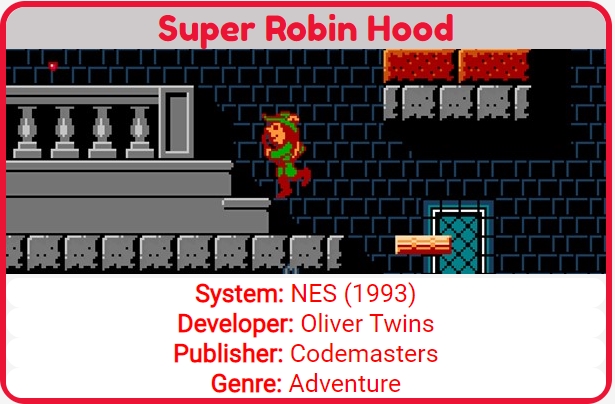 This is the game that started it all. Despite the Oliver Twins having developed games for years prior, this was their big break. Super Robin Hood was the first game the two brothers got published by Codemasters. Of course, this was just the start of an extremely long and fruitful game development partnership between the Oliver Twins and Codemasters.

The game itself is an enjoyable 2D romp where players assume the role of Robin Hood. They collect all sorts of treasure along the way, such as jewels and gold. It’s tough, though, as there are enemies around every corner looking to stop Robin Hood in his tracks. The colorful artwork stands out and would become standard for the duo. 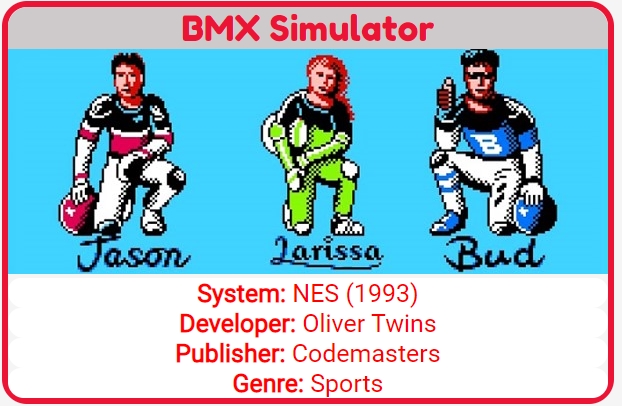 BMX Simulator is a game that was actually included as part of the Quattro Sports compilation on NES. This cart included Baseball Pros, Soccer Simulator, Tennis Simulator and BMX Simulator in the US. BMX Simulator is a top-down BMX game with three levels of difficulty. Even on the easiest difficulty (dirt bike) the game requires skill to control. One wrong maneuver and your biker will end up sprawled on the ground. 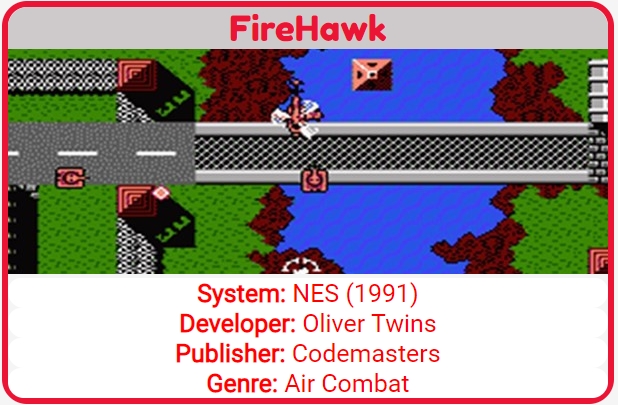 FireHawk is a unique game for the time that puts players in command of a helicopter. At times it’s a top down shooter, but does not simply scroll vertically or horizontally. Players are free to roam around the level shooting down enemies that cross their path. Then there are times when the view shifts to directly behind the helicopter. This 3rd person view has players shooting enemy helicopters in order to defend soldiers boarding your helicopter. It’s a fun, sometimes frantic, arcade-style game. 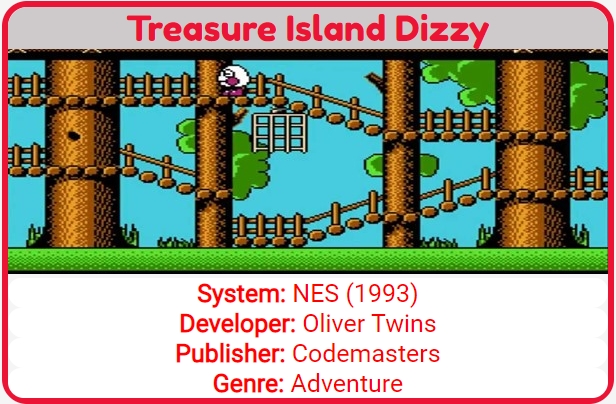 Interestingly, the very first game in the Dizzy series is not included in The Oliver Twins Collection. The second game Treasure Island Dizzy, however, is! While the original was more hectic and based on fighting enemies, this time around Dizzy got to use their head a lot more. There were more item puzzles to solve, making this more than just a simple sequel. It was also incredibly difficult. Fortunately, ever since Treasure Island Dizzy, the difficulty was tapered down thanks to the addition of a life bar. In this game, poor Dizzy only has one life. 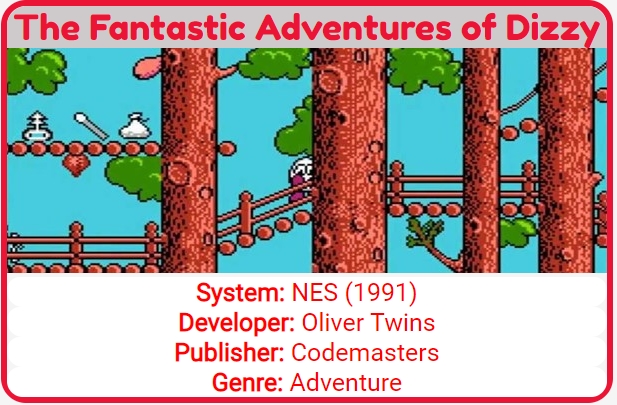 This game goes by two names — Fantastic Dizzy and The Fantastic Adventures of Dizzy. Whichever name you prefer is fine, as they both point to the same experience. Those who had been following the series up to this point found this title to be a mix of all that Dizzy had to offer. There were still inventory puzzles and difficult action gameplay, as well as a ton of collectible items. There were also minigames paying homage to classic Oliver Twins games. It’s worth a look for fans of the developer. 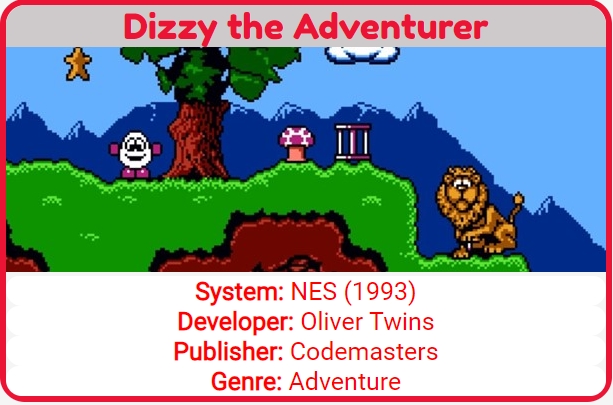 Here’s another game that goes by multiple names. It was originally released as Dizzy: Prince of the Yolkfolk before being ported to consoles. Once ported, it assumed the new name of Dizzy the Adventurer. Although not the first game in the series, it’s surprisingly easy to complete (due in part to a shorter game length). This makes it a great way for newbies to get into the world of Dizzy. If you have no idea which game to play first, give this one a spin. 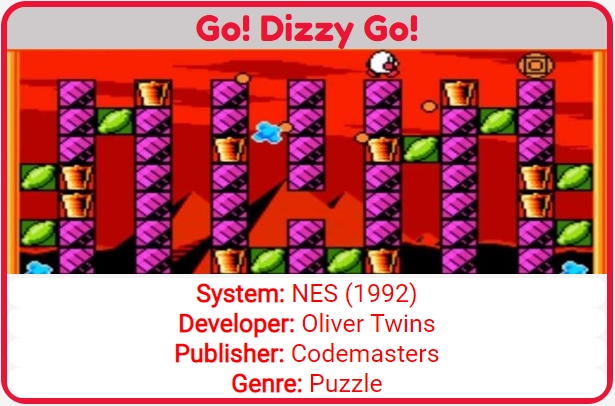 This is one of the Dizzy games that isn’t like all the other adventure-styled titles in the series. In fact, it was originally released as part of a collection of games rather than as a standalone release. Go! Dizzy Go! still features the famed egg mascot, but this time Dizzy is running through 2D mazes instead of through 2D worlds with Yolk Folk friends. The puzzles are simple but fun. This is a game that’s easy to pick up and play in small bursts, befitting of the Evercade’s portable form factor. 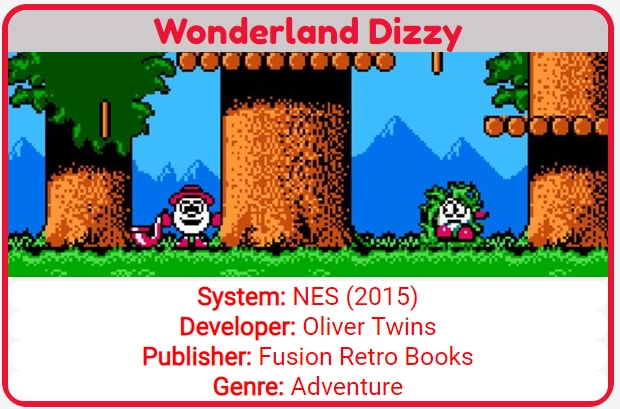 Now we’ve arrived at the point where games on the Evercade cartridge were not released back in the ’80s and ’90s. The Oliver Twins found their old code for this NES game and finished it up before releasing it freely online. Wonderland Dizzy itself is a bit of a remake of Magicland Dizzy, which is not included on this cart. It’s yet another fun romp with Dizzy through his colorful 2D world. Despite the odd release history, it still stands up amidst the other classic titles. 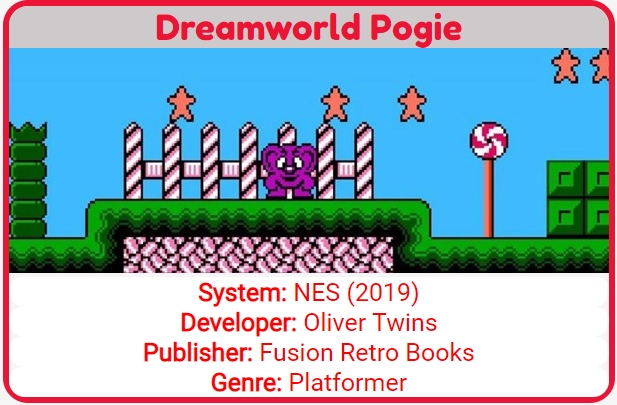 Dreamworld Pogie was indeed developed back in the 90s. It was hoped to be a new franchise just like the popular Dizzy was. It was never released, however, until a Kickstarter campaign in 2016 offered up new copies of this old game. It’s a colorful 2D platformer which would have used the Aladdin Deck Enhancer, had it ever arrived on store shelves. The fluffy purple Pogie could have become a new European game icon but we’ll never know for sure now. 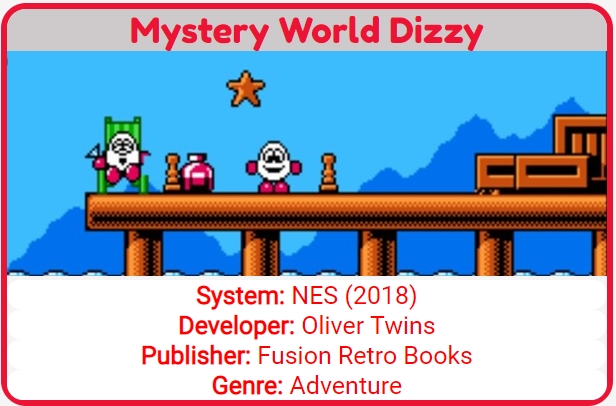 A year after the successful Dreamworld Pogie Kickstarter, the Oliver Twins found another unreleased game in their storage. This time it was Mystery World Dizzy, which was itself a NES remake of Fantasy World Dizzy (which is not available on this cart). It too was released for free online so anyone could play it. As with other games in the series, players must collect stars and solve inventory puzzles in order to win. It’s classic Dizzy all around, despite only making its way into players’ hands in 2018. 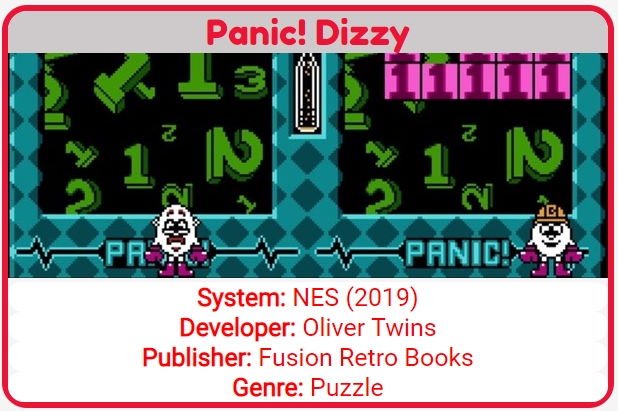 Panic! Dizzy was originally released on ZX Spectrum in 1991 and developed for NES in 1992. Just as with Wonderland Dizzy, Dreamworld Pogie, and Mystery World Dizzy, however, it never launched on NES. In 2019 it was dug up and released free of charge. Panic! Dizzy is a 2D puzzle game with five different types of block matching puzzles. It’s exciting to see that Evercade is so willing to mix up their carts with retro games as well as unreleased ROMs. This makes The Oliver Twins Collection cartridge a must-have. Before now, the only way to get these games physically would have been to participate in long-closed Kickstarter campaigns which released limited quantities on NES carts.