Hello, and welcome back to our new Apple Arcade Roundup, where we take a look at the latest mobile games on the Apple Arcade subscription service! Earlier this week in Apple Arcade news, we were given a look at Fantasian, the type of epic experience we’d love to see more of on the service, but alas, it’s still a while away. Instead, this month only brought us a mere two titles that…well, let’s let the reviews speak for themselves. And thanks to an assist from our own Jordan Helm, who helped chime in as well! Now, on with the games… 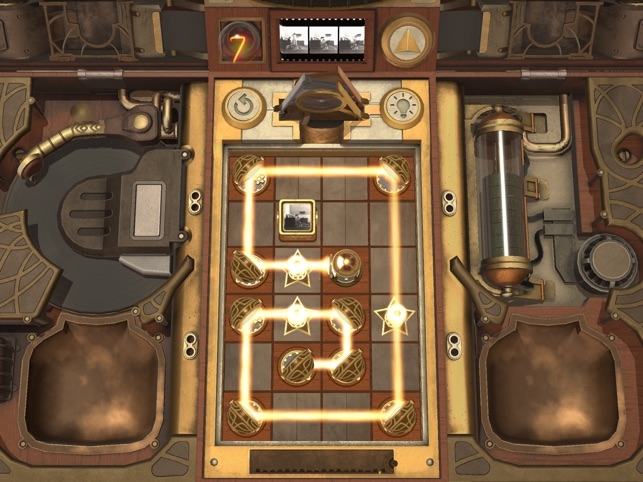 As I had mentioned last month, Lumen is sort of a hard game to review. So you know that old puzzle game or occasional puzzle/mini-game you find in other games where you’re given a square or rectangular grid, and you have to rotate a bunch a diagonal mirrors on it in order to direct a laser beam or something similar so that it reaches the space with a goal on it? Well, Lumen is that game. Just tens of dozens of those puzzles, all having you just tapping to rotate mirrors, lasers and various objects.

Perhaps I should back up a little first. The game’s premise is that you have uncovered the Lumen Box, a device created by a Scottish inventor known as Olivia MacLumen, and solving all of the various puzzles within it will eventual reveal her story, and her various turn-of-the-century contraptions. Every time you complete a puzzle, each story involving one of her creations advances, though you also need to direct any beams over three stars as well as pointing them towards the goal if you want the full, clear picture. Presentation-wise, it’s all well done, with the box itself coming across like a nice and elaborate, detailed, steampunk-ish creation, and it’s accompanied by a nice and jazzy soundtrack, complete with an actual built-in record player for a nice touch.

Olivia has challenged us with with uncovering their tales by solving the challenges presented by the Lumen Box…and by challenges, she apparently means the same challenge, over and over again. Lumen is basically the video game equivalent of one of those books filled with five hundred sudoku puzzles or whatnot that you pick up at a convenience store: it can be fun, being filled with a bunch of puzzles designed to occupy hours of your time, it’s simple and easy to understand, but there’s also unsurprisingly not much in the way of variety. The only real difference is that Lumen is a book of puzzles that has the same basic puzzles inside, just with ornate decorations and a cute story with a good chunk of charm as Olivia’s work is revealed after every puzzle.

There is one notable difference between Lumen and all of those puzzle books, though. Most of those books at least have the decency to divide up their puzzles by different sections with increasing levels of difficulty. Lumen, on the other hand, has an almost non-existent difficulty curve. Occasionally, it’s just a case of the game introducing a new type of block, like one that splits up beams, and giving a little tutorial level or two. But even over a hundred puzzles in, I still found too many that I could solve by either just tapping a few spots or just initially messing around. I realize that when you craft this many puzzles or levels, you’re likely bound to run into a few duds, but the game could have benefited from better structuring.

Lumen is a cute little distraction for a while, thanks to its simplicity and cute presentation, but it gets repetitive after a while, with the puzzles starting to feel like they were just randomly thrown around after a while. There’s nothing that particularly wrong with it, but you can do better as well. -KL 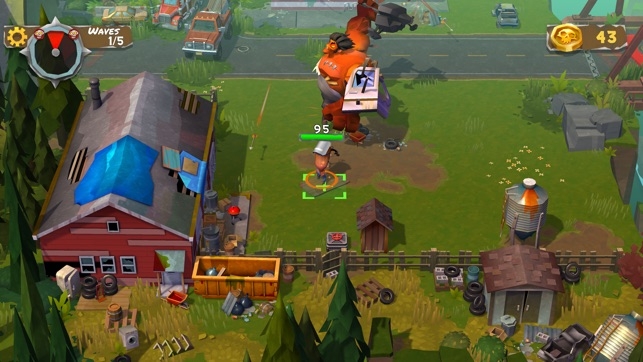 A mixture of trends both continuing and seemingly-distant alike, Survival Z is about as straightforward and as non-descript as its rather unimaginative name might initially imply. Generic the naming might seem and while not exactly the most unique aesthetic to survey — with its low-poly, non-violent rustic flair — what Survivial Z may lack in staying power, it does at least make up for in its pick-up-and-play ease that any good survival-based, run-orientated roguelite can administer. On your journey you pick one of a few branching paths OutRun-style. Each event on said branch’s path can be a regular encounter, in which players are required to survive three rounds of enemy waves before they can proceed. They can also deliver old-fashioned RPG scenarios in which a body of text offers up a scenario and players must decide what action to partake in.

Sometimes both results end up in acquiring a useful item, like a medkit or extra gold (used to level up weapons and one’s character), sometimes it’s a harder encounter with the benefit of more gold. Other events include vital checkpoints in which new gear is unlocked to be accessed back at the starting menu, or simply an opportunity to reclaim lost health. Survival Z’s gameplay will be familiar to anyone who’s played a twin-stick shooter. The only difference is that not only does your weapon remain tied to that of a cross-bow — with end-of-level perks potentially increasing (and stacking) damage/fire-rate/crit rate etc. — but it’s also automatic and locked to the nearest enemy. While this may seem beneficial, the game sometimes doesn’t get the registration right in acknowledging which enemy to fire at. Beyond that there are occasional traps and devices to set up between waves, upon acquisition, though these items cannot be carried over into succeeding rounds. Some are more useful than others; the turrets are a precious device to keep and maintain, while the sandbags are near-devoid in purpose.

What’s more, while these items can drop from fallen foes, their rate of drop is entirely random — as is the locales you explore and how many entry points enemies come through that you’re having to deal with — which like a lot of Survival Z’s enjoyment, is relegated to a more encompassing presence of pot luck, rather than careful strategy with how one moves about. On top of the forgetful music (which quickly becomes repetitive), uninspired map design and a fair few technical issues that see audio cut off completely in large parts, there’s not much other than the allure of setting personal records, to continue on with Survival Z. The well of unlocks is neither huge nor that different beyond mere cosmetics.

While accrued currency is permanent and an argument can be made that progression is fair — always sure to give at least something back for the time spent — Survival Z’s inoffensive, seen-it-all-before premise is nothing to write glowingly about. The basics it no doubt gets right and can grow into something a touch fair on proposal, the best the game can realistically reach for is a distraction of thirty-or-so minutes before the tedium, like most roguelites, quickly and inevitably sinks in. A low-poly, non-violent, zombie survival game is a break from the norms of previous, but this one is bound for as much the same fate as its former brethren. -JH

And that wraps up this month’s Apple Arcade Roundup! Not exactly the greatest lineup this time around, just offering up a couple of decent yet unoriginal titles. Next month, though, we’ll take a look at the zen-like arcade puzzler SP!NG, and it’s possible Spry Fox’s new life sim Cozy Grove will arrive by then as well. Tune in next month to see how the new titles turn out!