It really is hard to envision how Nintendo’s view of the cooperative mode in New Super Mario Bros. Wii and U, along with Super Mario 3D World came to be. Nintendo was trying to create a multiplayer experience for the Mario series, one tuned for action, but also accommodating for families and friends. But if you’ve ever played either of those games with friends, you’ll realize within the first go that the game wasn’t destined to be a “help your friends get to the end of the stage” kind of cooperative. Nintendo made a number of design choices that eliminate the cooperative vibe entirely, but whether they wanted to or not, they created a twist on multiplayer that sneakily stood between cooperation and competition, all while letting gamers embrace their own dark sides.

I had this realization of the concept when I purchased New Super Mario Bros. Wii back in 2009. I completed the game’s story on my own without any trouble and I really liked the visuals, the music, and all that Mario charm that stood stalwartly over the wall like those monsters with no skin from that one anime everyone is telling me to see. It was a fun, if formulaic game, but I did remember Nintendo originally pitching the game as “the first cooperative multiplayer Super Mario Bros. game.” I was curious at this idea; it sounded interesting and even the E3 demos of the game retained what I loved about past games in the series. Some of my best friends and I had a tradition of staying up all night playing multiplayer video games and while we love Smash Brothers and Halo, we were always curious to add a new multiplayer game to our expanding list of games. We had our Wii Remotes ready and started the game up on World 1-1. 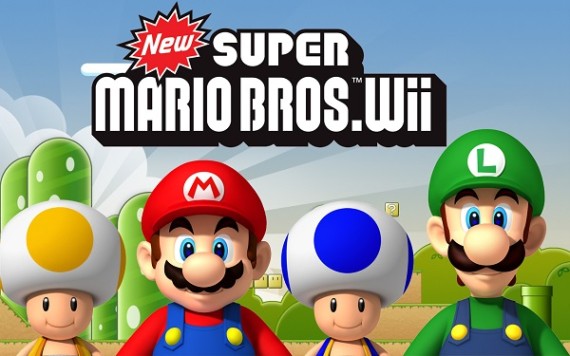 Within five seconds of the level, before the music even reached a familiar theme, we were jumping around the level goofily, swiping power-ups from each other, and of course, picking up and tossing each other to our deaths. Upon dying, our characters would float to the surviving players to respawn, but our goals were more to avoid each other, not save ourselves. It was pandemonium. Sheer unrestricted chaos. Our goal was never to find secrets through clever jumping between characters or even reach a high score; it was simply to act like complete idiots in-game, badgering each other, which would lead to us swearing at each other in real life and yucking it up as we’d respawn.

What really blows my mind is that Nintendo tried to pitch this game as a cooperative experience; there’s simply no way to do it. You’d have to be a group of four rocket scientists with Ph.D.’s and hearts of pure gold to play New Super Mario Bros. Wii in the way Nintendo pitched it to us. Maybe the family environment would be more forgiving and follow Nintendo’s directions, but to gamers who’ve grown to love Mario since the beginning, we find excitement and fun in breaking those rules and restrictions (it’s why we’re so interested in things like cheat codes and PC mods). Did anyone at Nintendo actually playtest this games with real gaming individuals? The end result was a game that never did what Nintendo said it would. It was not a cooperative experience in the least.

But at the same time, it wasn’t a competitive experience either. Sure, you could earn advantages and rewards by playing like you did, but there wasn’t any real end result where you “won” against your companions who “lost.” There was no winner in New Super Mario Bros. Wii. But why did you not work together? Because you got enjoyment out of stealing mushrooms and bouncing on your friends’ heads. The sole reward was the satisfaction of being a jerk. New Super Mario Bros. Wii was an exercise in schadenfreude, a way to take pleasure in seeing your mushroom-headed friend take a fall into a purple lake.

It’s difficult to define what exactly Nintendo had created with this type of mode. To make things a bit easier, I’m dubbing this kind of mode “anti co-op.” It never encourages cooperation, but at the same time, never can really be considered competitive. It stands in that grey area between the two, never pitting you against each other for victory, but being too chaotic and unstructured to exhume that cooperative synergy. Nintendo wanted us to troll our friends; why else would they give you the ability to pick your friends up and throw them? They promoted the game as a cooperative, unified, almost familiar experience, but deep down, it wasn’t. Simply being able to pick your friends up and toss them off-stage shows that concept. The idea became even more chaotic with New Super Mario Bros. U, where the Gamepad’s use of creating platforms made games even more frantic. It was absolute anarchy in the Mushroom Kingdom.

It sounds terrible. It sounds frustrating. It sounds like the worst cooperative mode ever made. But it was fun. Loads of fun. Some of the best multiplayer I’ve ever seen in a game.

During this exhausting period of chucking friends off cliffs, stealing Yoshis, and descending the flagpole to leave your companions behind, I was laughing. My friends were laughing. I called them names, they pointed fingers, we were all having an amazing time just being jerks to one another.

This moment where you realize how much fun you’re having trolling your friends and being trolled back is something truly special in gaming. It’s hard to classify, but its significance is enormous, nearly defining the party multiplayer setting that Nintendo created back in the days of the Nintendo 64. In fact, its influence comes from that era. The sort of insanity created in New Super Mario Bros. Wii is oddly reminiscent of Super Smash Bros.: a fast-paced, action-oriented setting where chaos takes control. But unlike Smash Brothers, New Super Mario Bros. Wii doesn’t really offer any reward for “winning.” In fact, you can’t “win.” You’re just finishing the level. By stripping away that blatant incentive to achieve victory, New Super Mario Bros. Wii made the badgering and trolling more subtle, as if you shouldn’t be doing it. It adds that idea of mischief, that perverse desire to be “bad.” Anti co-op is that little devil on your shoulder that tells you to just nudge your friend into that pit. As gamers, we have a desire to bend the rules and take paths that veer off from where the creators intend (that’s what separates games from purely linear film and TV). Nintendo, in their own way, let that happen. 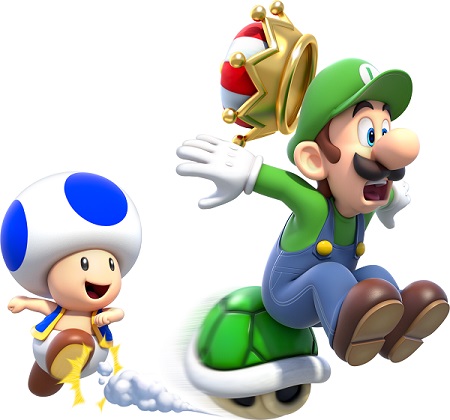 To me, it’s kind of a shame that Nintendo introduced the “crown” in Super Mario 3D World. It loudly announces a competitive atmosphere and takes away that mysterious element of deviousness that its predecessors introduced. But even with that included (and the point tally at each level’s end), anti co-op is still in the game’s blood. Mario’s multiplayer thrives on that sense of roguish chaos, and believe it or not, it’s better that way. Cooperating for a perfect jump in a platformer takes time and precision, something that a high-speed platformer isn’t built for. You want to keep moving forward, so setting up a jump doesn’t work as well. You need that momentum and that motion to truly enjoy it. It’s still a mystery why Nintendo pitched New Super Mario Bros. Wii (and its successors) as a cooperative experience when so much of the game’s multiplayer design was devoid of cooperative elements. The ability to mess with your opponents so effortlessly demonstrates an embrace of a lack of structure and a desire to be a grade-A troll. But it’s so difficult to have a bad time with it. Not once will you participate with your friends as a tight unit, but when you’re laughing your butt off and swearing at each other, you’ll realize that cooperation doesn’t always lead to better times.

So is this how you want Mario multiplayer to work? Leave an opinion in the comments and explain your own experiences with “anti co-op!”