The Descent-style FPS is a scarce variation of the genre, so when one shows up it’s almost always a treat. Neon XSZ is the latest to appear, and while it just landed on Desura in alpha form, I’ve had the pleasure of testing it for the last couple months. Seeing what started as a solid arena shooter with a surprising amount of depth evolve into the well-balanced, professional game it’s become has been a load of fun.

In Neon XSZ you start out choosing from one of three ship models, each with strengths and weaknesses. It’s hard to know how to balance much of anything early on, so grabbing the one that looks coolest is the only proper method of choice. Then you hop into a randomly-generated station divided up among four factions, two hostile and two friendly, with most territory controlled by the hostile ships to provide plenty of targets. And then you go hunting.

There’s no plot or goal to follow, but rather a situation where enemy ships are just flying about being enemies. Seriously, what the hell is that all about!? What on earth are they thinking, flying around territory you happen to be near, loaded down with loot? That’s just a terrible idea on their part, and the only way to explain this to them properly is with guns and missiles. But first, as a level 1 ship, it might be a good idea to select your targets carefully.

Each ship has a tech level, and targeting it lets you know how lethal it’s likely to be. With a bit of fancy flying, level 3 ships can pay off pretty nicely on the default difficulty settings, but there’s no shame in taking out enemies closer to your rank until you’ve gotten some nice upgrades. Every ship that’s destroyed blows up in an explosion of colored spheres, and collecting them means getting a percentage of research towards everything they were carrying. Guns, engines, hulls, shields, and other tools are all available to find, and while it can take a bit to destroy enough enemies to earn a new part, you can always use the percentage discovered to earn a hefty discount at the store.

In addition to the tech spheres, enemies also drop uranium and carbon nanotubes. The tech spheres are attracted to your ship, making collecting them pretty simple, but uranium and carbon just sit there waiting for you to fly through them. They’re currency, after all, and that requires a bit more work. Uranium is used to purchase items at the store, but it also powers every action the ship takes. Spending it all is a terrible idea, but generally if you’ve budgeted 3kg for fuel it’ll turn out ok. Carbon nanotubes, on the other hand, are for overclocking gear, because a new engine is nice but a souped-up new engine is awesome.

You can’t just add whatever parts you like without a care in the world, though. Everything weighs something, and the ship engine has to move all that mass. A dreadnought with multiple guns can be slow death incarnate, but the lighter ships will be sitting ducks unless you pick your parts carefully. Every hull is balanced for use, and if some are trickier to design a good loadout for than others, it’s all part of the fun of figuring things out.

As you get new and more powerful parts, the ship tech level starts going up, scaling its weaponry to match. This in turn means new areas are no longer death incarnate, meaning new and more powerful ships can be fought, and they carry all sorts of interesting toys. Turrets that sit stationary in space and lay down heavy fire, drones that are less powerful but very maneuverable, weird shields that have a high defense once you learn the trick of positioning them, a blink ability for limited teleportation, and several other goodies become available as the stronger ships get equipped with new ways to shoot you into shrapnel. Once you’ve got the hang of a favorite loadout, it’s always fun to set a waypoint to an appropriately-leveled enemy stronghold and engage in an epic dogfight against everyone in the place, laser fire and electric death punctuated with heavy missile fire lighting up the neon-drenched environments.

It does take a bit of flying to get used to, however. The fighter craft are an interesting balance of arcade and sim, with handling that’s inertia-free. Hit the accelerator in any direction and, until you hit a wall or change thrust, that’s the direction you go. Firing pushes back a little, as does getting hit or picking up spheres, but in the beginning it’s a good idea to have the brake handy to keep the ship under control. 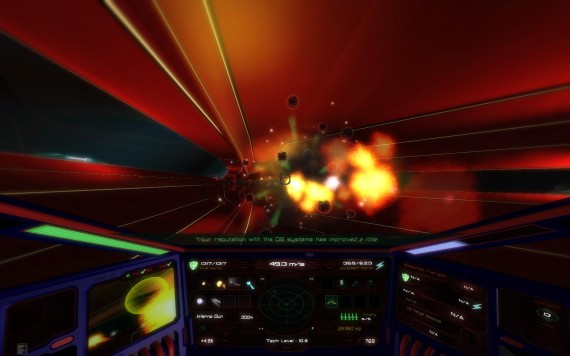 Like most 6 degrees of freedom shooters, it takes a whole lot of buttons to make go. I’ve found mouse and keyboard is best, but there’s a twin-stick control method in there as well. You’ve got up, down, left, right, forward, back, plus rotation in all directions. There’s guns, missiles, various tools that can be assigned to different slots, multiple targeting options, and waypoints. This is made a bit simpler by the cockpit being fully functioning. See all those buttons in the screenshots? None of them are for show. Hit a button to bring up the cursor, which also pauses the action, and you can mouse over anything for a pop-up description of what the item does. Click on any target in the radar and get a reading on the ship type and tech level. Use the buttons under the camera on the right to change the secondary view. For what’s at heart an arcade shooter there’s a ton of information at your fingertips, if you want it.

It is, however, a game without a plot or goals, and this means it’s not for everyone. The fun of Neon XSZ is the fighting and ship-building, tearing through enemy fleets or playing cat & mouse with a single ship that’s technically far more powerful than you should be confronting in order to harvest its tasty remains. It requires a bit of self-motivation, and that’s perfectly fine. Not every game needs to be an epic quest. Sometimes it’s just nice to get behind the cockpit of a fighter, ignore the idea of gravity or even up and down, and hunt down whatever lands in your crosshairs. Neon XSZ is still early in its development with more levels and gadgets to be added, but the base is already solid and the developer has constantly delivered on promises made in the dev log. There’s a lot of good shooting to be had here, and much more on the way before the game is complete.