You Should Play as Zane IF…

You enjoy using gadgets to trick and outwit your enemies. Zane employs three different gadgets that provide covering fire, distracts enemies, and protects himself and allies from incoming projectiles. Of the four Vault Hunters in Borderlands 3, Zane is the weakest from a defensive perspective, but he makes up for it with his maneuverability and unique capabilities.

Zane’s skill tree builds are broken down into Doubled Agent, Hitman and Under Cover. Doubled Agent allows Zane throws down a Digi-Clone that creates a virtual clone of himself capable of returning fire. Hitman has him release a SNTNL drone that bothers and damages enemies. Finally, Under Cover drops a Barrier that blocks all incoming projectiles. 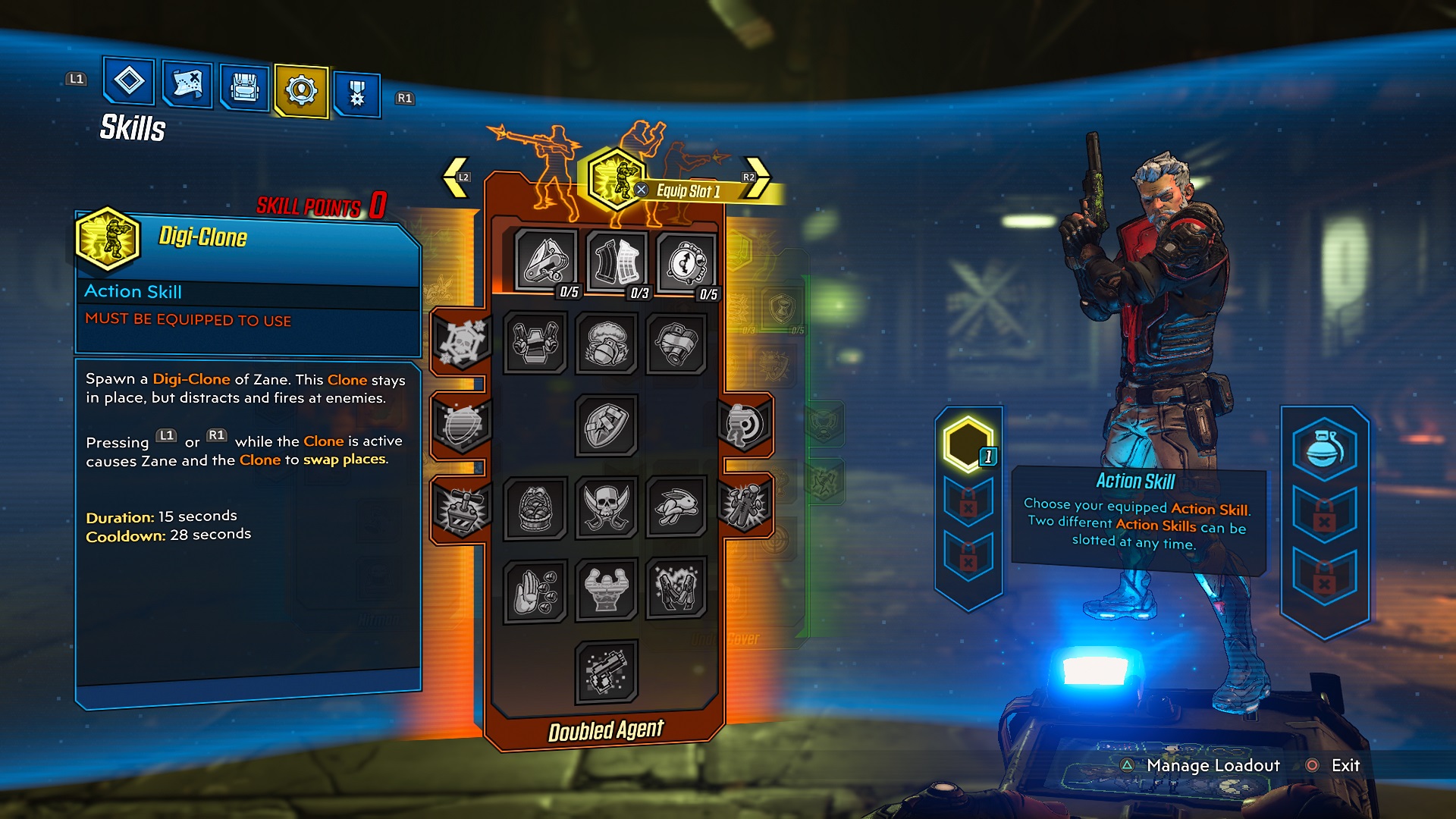 This tree focuses on the Digi-Clone, a virtual clone of Zane that distracts and shoot enemies. Though the clone can’t move, Zane can quickly switch positions with it by tapping the shoulder button the skill is assigned to. Of the three skills, Doubled Agent is the most versatile thanks to its Augments, which vastly increase the capabilities of the clone. 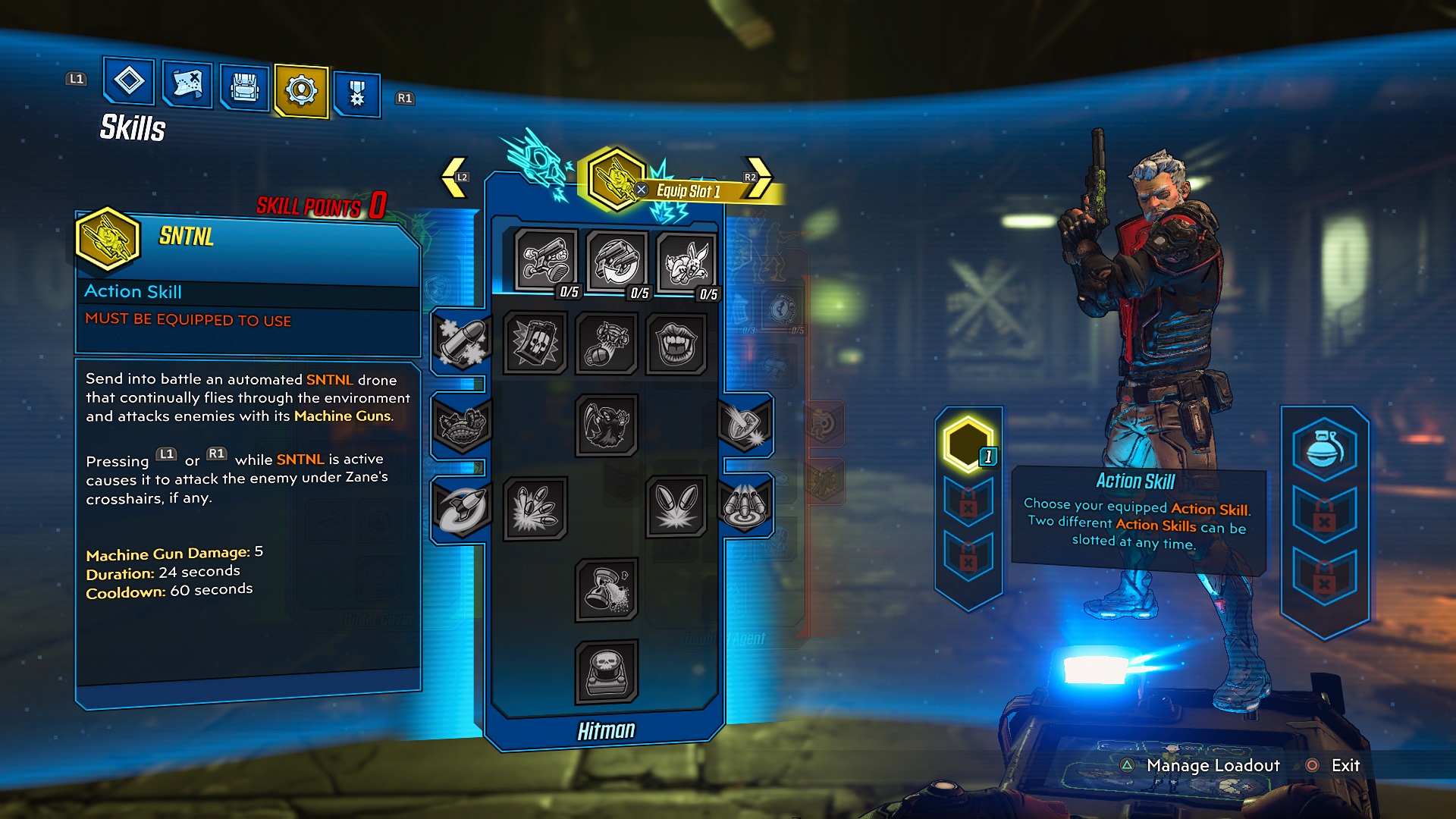 This tree focuses on the SNTNL drone, a companion that distracts and fires on enemies. While this tree doesn’t have the most visually-striking Augments, it does come packed with a lot of good passive abilities worth sinking some points into. Through Hitman, players can greatly increase Zane’s movement speed and the amount of damage he delivers depending on how fast he’s moving. Players can also increase reload speed, which is useful when dealing with some weapons that take a while to reload. 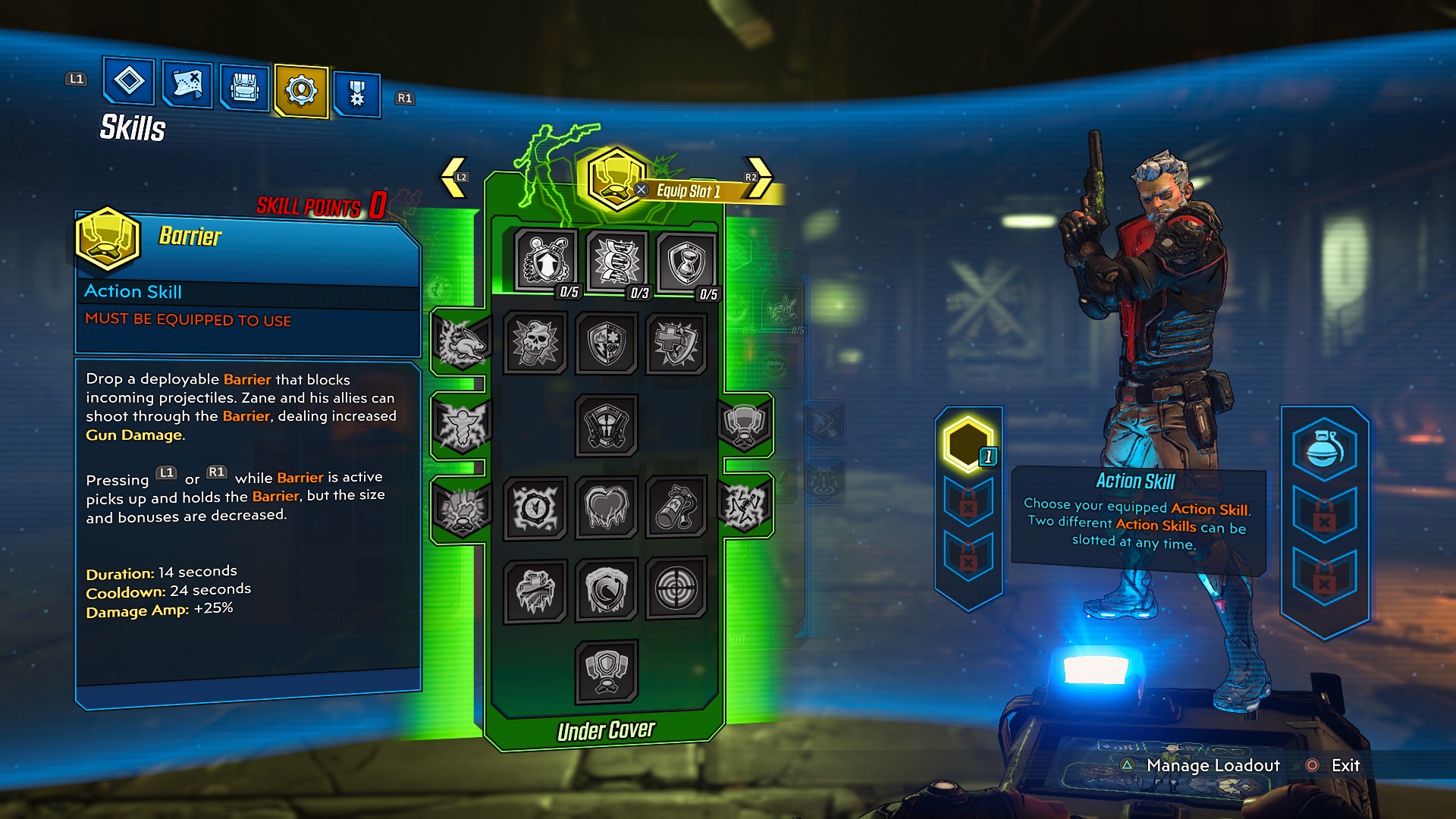 This tree focuses on the Barrier, a deployable shield that absorbs all incoming projectiles and increases gun damage when you and allies fire through it. Zane can also pick up the shield, though this does decrease its size and gun damage. It’s also worth noting that Barrier does not protect against melee attacks. Under Cover opens up in the late game with increased reload speed, health regeneration and faster shield recharge rates. 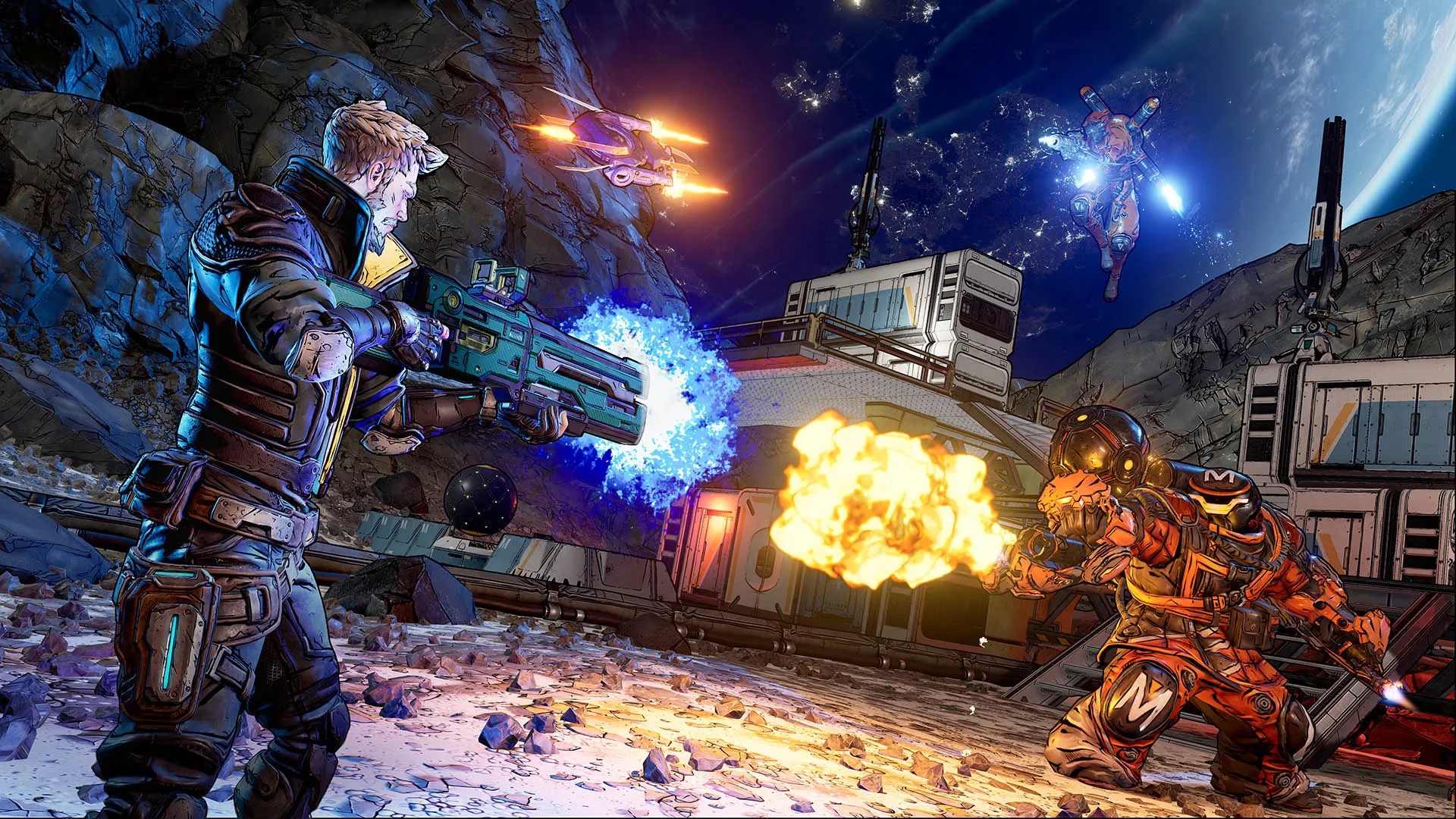 How to Setup Zane

Zane is best used when in co-op parties. While the character has great maneuverability, he’s best when the fire isn’t focused on him. He’s a huge asset when playing with friends. When running solo, however, none of his three Action Skills are that beneficial. Zane still works well if you know how to spend your points well, though.

First off, you should sacrifice the grenade slot. Both the Digi-Clone and SNTNL Action Skills more than make up the damage lost from sacrificing the grenade and have the bonus of distracting the enemy. Meanwhile, Barrier raises gun damage when on the field. In the end, there’s more to gain from dropping the grenade than keeping it.

Whether playing solo or co-op, Doubled Agent is an absolute must. At its core, Digi-Clone provides the perfect blend of maneuverability, firepower and defense. Once upgraded, the skill tree provides some of the best Augments for the character, including Doppleganger, which recalls the Digi-Clone and creates a huge explosion. Most importantly, for a character as fragile as Zane, players need Old-U, which gives him an instant Second Wind when he swaps with the clone.

As for the other two Action Skills, both are a toss-up. Hitman’s early game abilities provide a ton of maneuverability and the SNTNL deals damage. The edge ultimately has to go to Under Cover and Barrier, however, simply because there’s more synergy between the Digi-Clone and Barrier. The combination of both Action Skills feed directly into Zane’s strengths as a character. The only downside is that the best augments and passive abilities don’t pop up until later in the tree.

For more on the other Vault Hunters in Borderlands 3, be sure to check out our guides for Moze the Gunner, FL4K the Beastmaster and Amara the Siren.