Every now and then you wander into the scary section of YouTube, where you end up watching the last video a maniac posts before he runs out of his house naked in a desperate attempt to teach all of the stray cats in the neighborhood sign language. Such a video has been found, and I am sharing it with you as a warning to keep your cats indoors for the next 48 hours or so.

Whenever a system launch happens, there is always a mad rush to pre-order or get in line by gamers desperate to get their hands on the system so they can play the latest and greatest games that technology has to offer. And then there is a smaller group of people that also wait in line because they have large amount of disposable income and like to see people cry. There are always stories of people getting a console from a store, walking outside to the view of the people who couldn’t get one, and then smashing it on the sidewalk to a chorus of “O Fortuna” and children’s tears. YouTube user and crazy person dOvetastic has found a much more creative way to waste $400: microwaving the PS4.

The video starts out and you already know you’re in store for a wheelbarrow full of crazy when you see dOvetastic walking with a lab coat, carrying his PS4 to what looks like a combination of a rocket ship and a jungle gym. I don’t know if he is outside his house or if this is a public access rocket ship/jungle gym, but wherever it is at I feel it looks weird without it being surrounded by cops pleading for the safe release of all the hostages.

I’m pretty sure Dr. Frankenstein had the same machine. Somehow it gets weirder after he starts speaking.

“Microwaves are a person’s best friend. Welcome to a dOvetastic Microwave Theatre. Today I’m going to be professionally microwaving my PS4. YEAH. You got that right! I’m going to be microwaving it for your viewing pleasure brand spanking new right out of the factory box. TrueCook Plus so its going to cook it extra cooking good. (heavy breathing) I also want to make sure its turned on while its being microwaved. OOOOOOOOO. Super…beautiful blue.”

I fear that the PS4 was not the only thing that was turned on immediately prior to starting the microwave. He made sure he could turn it on so he could watch the light fade from its eyes as it died a slow painful death. I do appreciate that he emphasized the fact that this was a professional microwaving, because honestly that amateur microwaving gets so tedious to watch. I don’t even know where you go to get a professional’s license in microwaving, but I suspect he attended the University of McDonalds (safety school; McDonalds Tech all the way baby). I mean, he doesn’t seem to close the microwave door all the way because the power cord is jammed in their too, which is like literally the one thing you need to do to professionally operate a microwave, but whatever. 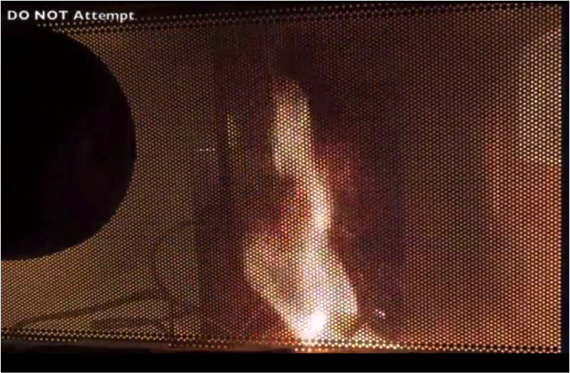 What was the point of all of this, you might ask yourself? Art, of course! dOvetastic here fancies himself somewhat of an artist apparently, and this isn’t the first piece of “art” his microwave has pooped out. He has an entire channel dedicated to ruining pieces of electronics or trash and calling it art. Most people call these “mistakes”, and I myself created some art last week when I dropped my iPhone on the sidewalk. If only I kept it I could’ve sold it as the centerpiece of my collection! Tentatively called “A Nikola Suprak Retrospective,” it includes all the things I’ve dropped over the past year, including several eggs, a toaster oven and my nephew. Who knew art was so easy!

dOvetastic even has an ebay store where he is trying to sell his melted PS4 for the low, low price of $11151.30, which is a number so random it has to be a code for awakening the dark microwave gods that will come and cook all of humanity. Why buy a working PS4 when you can spend nearly $11000 more and get one that doesn’t work? Not sold on the deal yet? What if I told you that, as a free added bonus, he is throwing in a frog statue with its head caved in and a replica human skull made out of underwear? And no, that isn’t a joke. He really is throwing in both of those things as an extra incentive. If I had asked you to come up with the two most frightening items you could find in a stranger’s house to convince you they were a serial killer, there is a 0% chance you would have come up with something better than crushed head frog statue and underwear skull. This guy has so many of them just laying around his house he’s throwing them in for free in his ebay auctions. I never knew you could sell crazy before this.

Digging around his store, you’ll find some even more terrifying items. There are a variety of other melted devices, many of which have actually sold in the past which means there is a community of like minded crazy people that like buying melted versions of things that usually work. His ebay account is named “perfectlymadebirds” which for some reason I find incredibly unsettling. I don’t know how he makes his birds, but I’m afraid he is a member of the Sander Cohen school of art. And of course, the biggest seller in his store are these antique paperweight eyes. Anything else just wouldn’t meet the required minimum craziness quota to make sense. We here at Hardcore Gamer are big supporters of the arts, so we’ve offered one dollar on this console and eagerly await his response. To sweeten the pot here so to speak, I’ve already come up with a jingle for his store which I give him full permission to use if we win the auction:

Where you can buy a melted PS4/

And lately I have noticed something weird/

All the neighbor’s cats have disappeared/

Buy now before the authorities show up to investigate the rocket in his backyard or that weird smell coming from underneath his porch!