Catacomb Kids wants to kill you.  It wants to spike, squish, drown, piranha-nibble, burn, freeze, poison, or just beat you to a pulp.  It’s not picky, so long as you end up dead.  The alpha was released with roughly a minute left on December’s clock and since then I’ve sent uncounted dozens of of hapless young adventurers to their inevitable subterranean doom.  And after every death I’ve selected a new adventurer with random stats and skills to try again, on the theory that next time I’ll remember to use the environment as a weapon rather than an obstacle.  The enemies are subject to the same rules as the adventurers, after all, and the many horrible deaths lying in the dungeon’s depths are just as effective against them as me.

Catacomb Kids completed its Kickstarter recently, aided in part by a mid-campaign video that showed off how incredibly effective a simple rock could be when used properly.  The roguelike platformer went from being a Spelunky clone to a a game in its own right, taking the ideas of Spelunky and melding them onto a side-scrolling action/RPG.  Survival in the dungeon’s depths isn’t just about hitting monsters with a sword, it’s about using weapons, magic, the environment, and the individual strengths and weaknesses of your current character to survive. 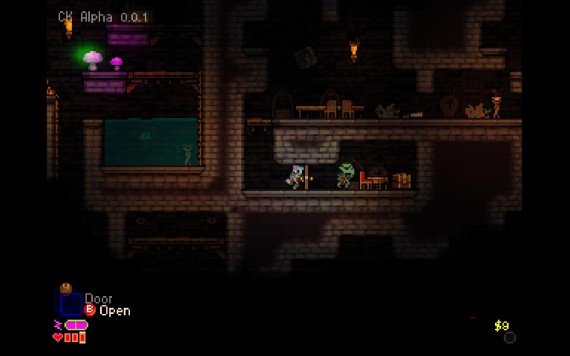 To give an example of how a run might go, at the start you’ve got a choice between Bully and Poet, your basic warrior and magic user, with several other potential classes marked as Coming Soon.  Both classes can do everything, and while the Bully can only cast one or two spells before needing a recharge and the Poet needs to keep thumping enemies for a hit point at a time until they finally die, each level has an orb that gives two skill points to apply to one of six stat categories.  You can also find different weapons and armor, spell books, and even rare rune stones that let you improve your character traits.

Leveling up your character isn’t all that worthwhile if s/he’s no fun to control, and Catacomb Kids is nicely responsive with a wide variety of moves.  The usual run and jump are modified by the Speed stat, and you can also do a dodge roll, carefully climb down ledges or latch on when jumping up to them, crawl  through tunnels when you suspect there’s going to be spike traps dropping from the ceiling, and even cast magic to increase mobility.  Leveling up a weapon affinity awards new moves, and eating the fallen corpses of your enemies (seriously!) can grant new perks as well.  There’s a lot of ways to get around the dungeon, and even a character with a Speed of zero moves and responds at a decent pace.  It’s not all wine & roses, due mostly to a pause that can see you stepping backwards and attacking instead of turning around (which is really crazy annoying when failing to hit someone behind you who’s not going to let your spastic flailing go to waste) but the point of a semi-public alpha is to catch things like this.  Everything else feels just like it should.

Even with all that on your side it’s still very difficult to avoid endlessly dying and restarting from scratch.  Catacomb Kids’s heroes don’t start off with many hit points, and it only takes a single bad throw of a flame potion to burn yourself to a crisp.  Or to accidentally trip a falling weight trap, go swimming with a piranha swarm, get a little overconfident in a room of kobold warriors guarding a chest, or any number of other possibilities for seeing the life squished out of you.  You can even the odds by throwing a mushroom into the water to poison the piranha, or kicking open the door to send the kobolds flying and tossing a freeze potion in after, or even combine careful dodging and weapons usage to brute-force your way through, but sooner or later the alpha is going to squish you flat.  In its current state Catacomb Kids is feature-rich but brutally difficult.  It’s also the very first release and still being tuned, so there’s tons of features and balancing to be done in the coming months.  Even on the runs that end after a less than a minute of exploring, though, it’s disturbingly easy to roll up another character and be halfway through the first level before you even realize you’ve restarted.

As alphas go Catacomb Kids is already highly polished, but there’s still a long way to go adding new environment interactions, character classes, gameplay modes, level generation tweaks, and many other undisclosed goodies.  What’s available in its current form, however, is a roguelike 2D sidescrolling RPG that’s already playing well, and the struggle to survive the vicious depths of its dungeons feels great in a “hurt me more!” kind of way.  First-release alphas don’t generally come out this polished, so the months of future development promise to be a whole lot of fun to see.