It’s an exciting time for music gaming fans thanks to the return of Rock Band, poised for its triumphant return after being gone these many years.  Or five years.  In gaming terms that counts as “many”, so let’s go with that.  Point is, Rock Band 4 was on full display at E3 showing off everything that made the series special in the past and the features to be excited about when it comes out in the future.

The major new addition to Rock Band is the ability for the player to get musically creative at certain point in the song.  The primary focus for this upgrade is the guitar, which has a new Freestyle mode for guitar solos.  Harmonix has been dreaming of adding this for years, all the way back to the first Guitar Hero, but the years-long break gave them the time and insight to develop it properly.  The way it works is that, during a guitar solo, instead of doing straightforward beat-matching to a complex string of predetermined notes you can craft your own musically-appropriate tunes. 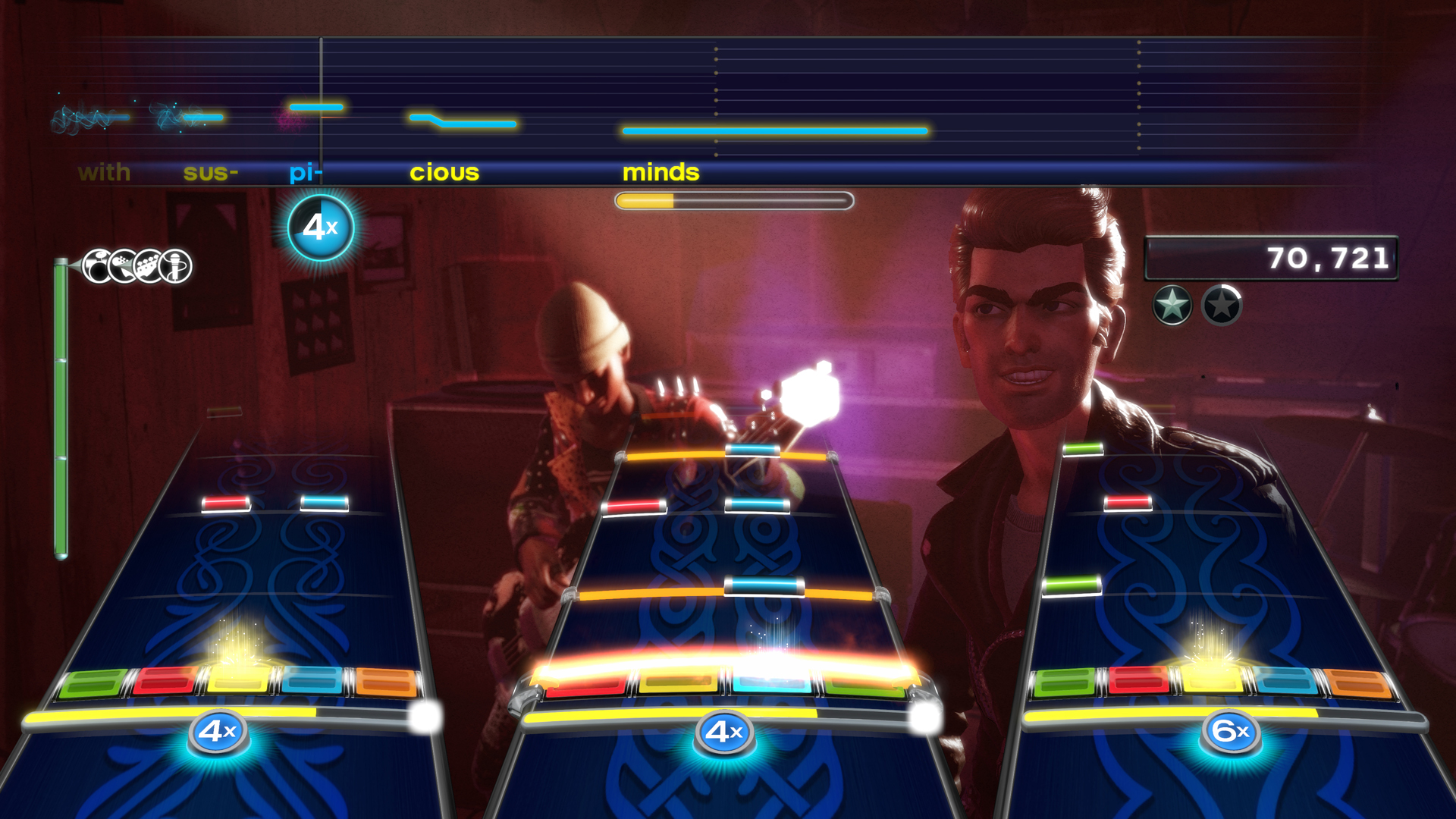 The freestyle options look fairly complicated but have been designed so that, even if you’re just flailing away, the music will sound good and fit in with the song.  It’s not 100% play-what-you-want but rather a series of notes and riffs built from a library designed to synch up with the music, and the objective is to make the player sound like a rock god no matter the skill level.  A player who’s got skill and experience with the systems will be able to get creative while someone wanting to pound out a pile of notes will have a good time screwing around with the guitar’s functions, and the goal is to empower the player rather than intimidate them.

The way it works is that the note track changes when in Freestyle mode, and you can either learn the system and play along or not as the whim takes you.  There are twenty five different possible note combos, depending on whether you’re strumming up, strumming down, holding the guitar vertical, or even using the upper or lower frets for different pitch.  One of Harmonix’s focuses was to innovate the gameplay without requiring the player to buy a new piece of hardware and going to the trouble of learning it all over again, although it’s still a work in progress.  During our interview time at E3, watching the different note-scroll for the freestyle section, Steve asked  “How are you figuring out what visuals to use?  Is that a tricky process?”, which got an instant come-back from Greg LaPiccolo of “It’s kickin’ our ass!”  Like any game in development some systems are easy to build while others get constant refinement and tweaking, and Greg instantly followed up with a cheerful “But we’re getting there.” 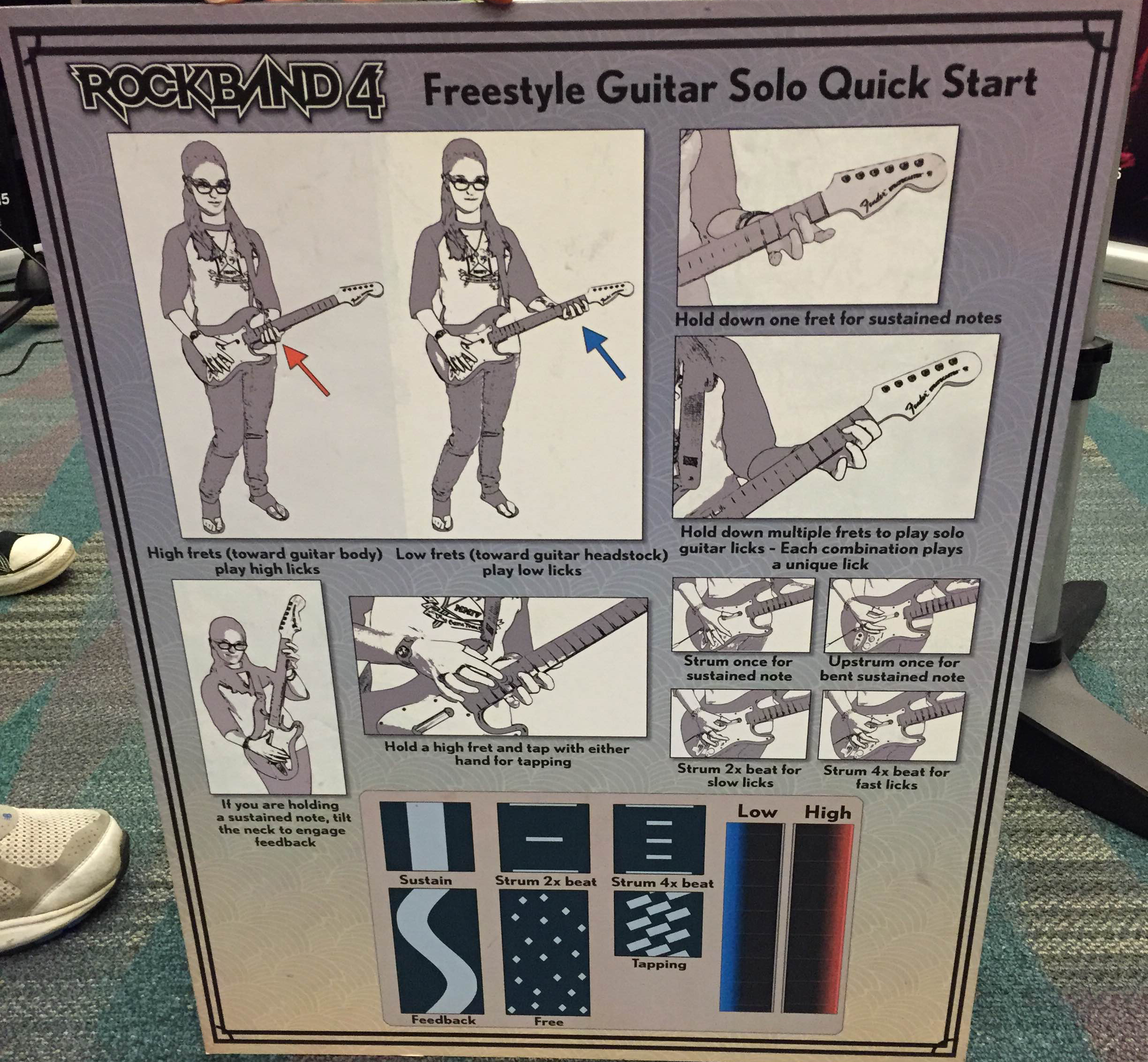 While the bulk of the work is going to the guitar, both vocals and drums are getting a similar set of tweaks.  Vocals have Exultation Mode, where you can ad-lib lyrics so long as you remain in tune, letting your inner Weird Al take the mic for a while.  Drums have always had a freestyle mode, though, so the overdrive sections didn’t need much in the way of adjustment.  All the systems are getting a brush-up for the new game, though.

While the main focus at E3 was showing off all the new toys in the Rock Band toybox, there was other welcome news in the form of a price and release date.  Rock Band 4 is launching October 6, and if you reserve it from Gamestop it comes with 3o extra songs and Amazon bumps the bonus track count to 34.  The game by itself is the expected $60, while the guitar-only bundle is $130 and drums, guitar, and mic is $250.  The new instruments are improved versions of the old ones, but if you’ve still got a dusty plastic guitar in the back of a closet somewhere it’ll work just fine.  Hopefully it’s been getting a nice rest over the last few years, because there are only a few more months left before it gets put through its paces again.