The long-awaited collaboration with Yoko Taro in Final Fantasy XIV is here and it’s a doozy. This takes twenty-four players into a NieR Automata inspired dungeon where players will battle familiar foes from the 2017 hit. It’s comically written and very challenging, but the rewards are worth it, with Pods as minions, and various pieces of gear that are decently leveled and great for glamour.

Not knowing what you’re in for, this can be a very challenging fight. Not so difficult where players give up, but expect quite a few deaths in the process. Here’s a guide to learn the mechanics of the dungeon and each fight. There are spoilers, so read this guide at your own discretion. 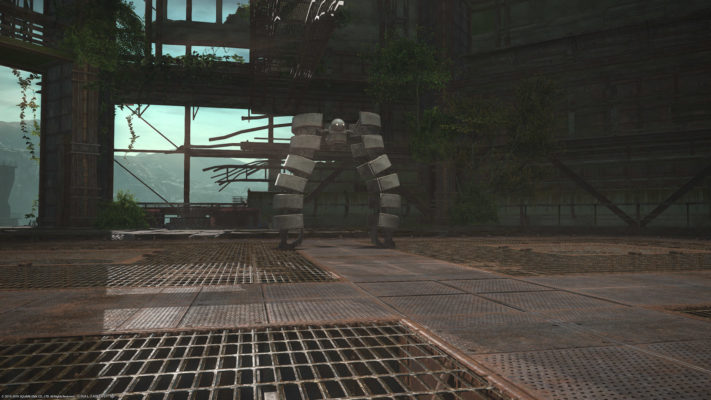 Systematic Siege: The boss’ first move is to summon four units on the outside of the arena. They will shoot orbs parallel  to where they are situated and will shift position. These are easy to avoid, but because they move so slow you can forget about them.

Energy Assault: The first tricky attack. SJ will turn in a direction and shoot orbs in a large cone. This can be difficult to predict with the boss being fairly symmetrical and all the special effects going off. It will slowly chip away at your health the longer you stay in it.

Systematic Targeting: The same units from Systematic Siege will come down in the arena and target random players. try to take these to the outside and keep running. If you’re hit, it will inflict heavy damage (most likely kill you if hit with more than one) and place a debuff on you.

Centrifugal Spin: He will spin in front and behind him. Get his sides unless you wanna go flying.

Sidestriking Spin: Opposite of Centrifugal Spin, be infront or behind SJCM .

Systematic Airstrike: Those robots will come down once more, but you’ll see the four, let’s call them conveyor belts around the arena. Each will be tied to a belt either inside or out. Do not get under them otherwise they will hit you for immense damage and put a debuff on you.

Systematic Suppression: This will place directional blasts on the entire arena, but does it half at a time on the first time. Just place yourself just outside the first set of laser beams and move onto the safe side immediately afterwards. He will upgrade this to where he’ll have a third group of robots. You will need to find the quarter of the platform that’s safe.

Bullet Hell: This move doesn’t have a name, but SJCM will stop and start shooting orbs around him. It’s a three part attack where the attack area is further away each time, so position yourself closest to an attack radius and move into it after it goes off.

Shockwave: Combined with Systematic Airstrike, SJCM will push everyone away from him.

That is basically all the mechanics this boss has. He’ll just continue to use these until you kill him. 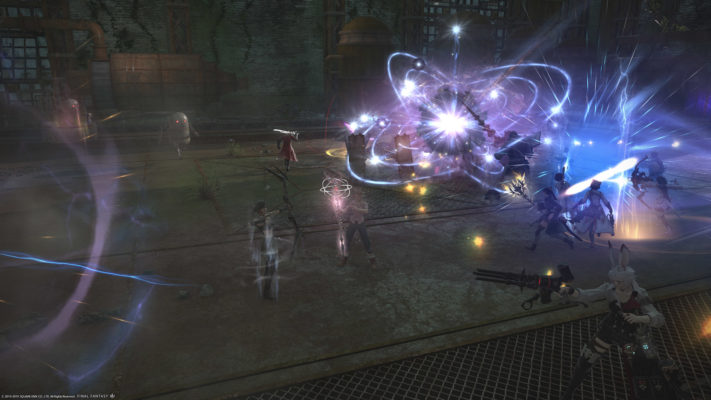 Not much to this fight. The first group goes down fast. The second group takes more time to kill, with four of them shooting orbs in all different directions and the Multi-leg Medium Model in the middle attacking with a line attack. 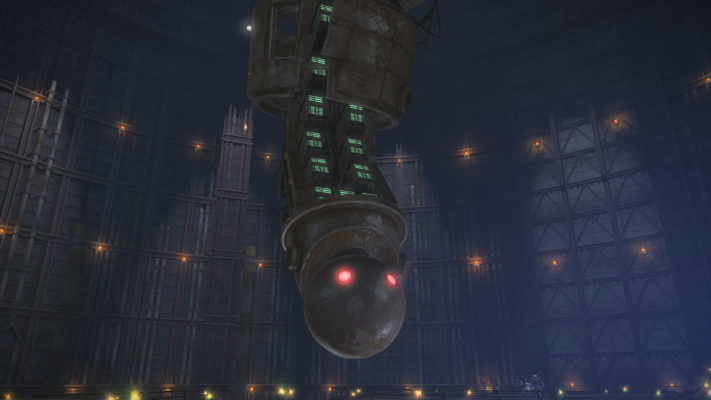 Arguably the most challenging fight in the entire raid, this will have each alliance on their own platforms. If you can, position your healers on the sides because it’s the only way for players in other alliances to get you (otherwise you’ll be out of range). This isn’t like The Orbonne Monastery Thunder God where it’s reliant on each group working together. This also rotates different attack patterns to each party.

Laser-resistance test: Raid-wide attack that hits three times initially, and up to six times later on.

Ring Laser: More positional damage that comes in waves and moves closer to the center of the platform. Stand directly in the middle or move into the area it has already struck to avoid damage.

Laser Sight: This will be a stack in front and behind mechanic. It will happen whilst one of the attack patterns below occurs.

This is where things can get tricky. Each platform will receive a unique onslaught. All will be tied together with mechanics such as not touching a specific part of the arena, avoiding AOEs, Ring Lasers and stacks.

This can be a bit of a chaotic fight, but relatively simple once you get the mechanics down. Really, only attack pattern 3 can be troublesome. 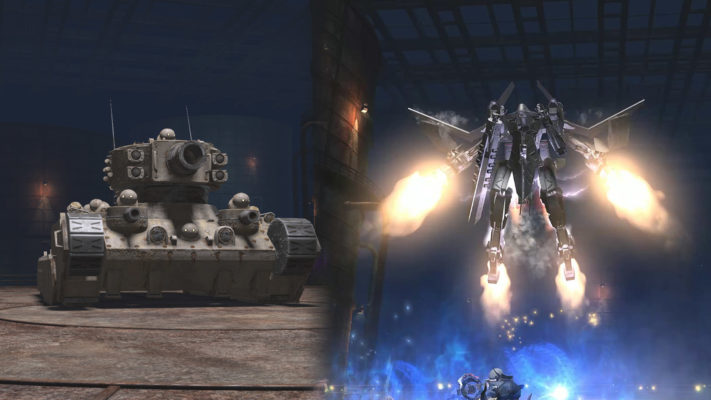 Energy Ring: The same ol’ wave-based attacks attacks. Stand on the edge and enter the safe area when the attack goes off.

Robot Rush: This doesn’t have a name, but each person will receive a tether, and on the other end is an exploding robot. Simply drag the robot out to the edge and avoid overlap.

Area Bombing Maneuver: A surprisingly deadly mechanic for a mini-boss. Run out and don’t overlap. Bombs will rain down towards the person it targets.

Lightfast Blade: Large cleave in a direction based on his position. This will overlap with Area Bombing Maneuver. He will also go to a corner of the map and perform this, so be ready with sprint. 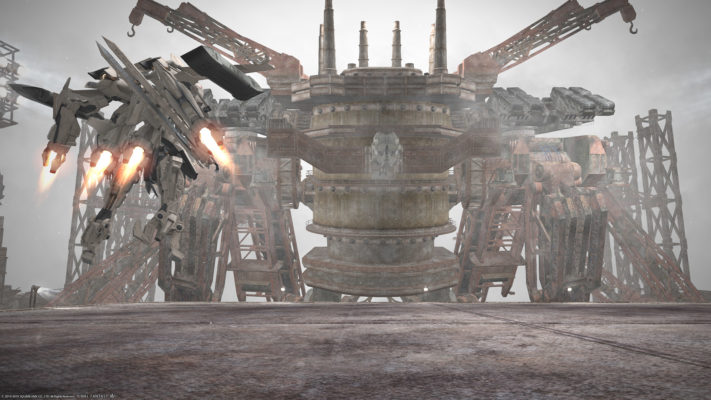 Marx Smash: Engels will move one of his arms. Move to the side of the platform that’s opposite of his swing.

Precision Guided Missile: Three will be targeted  with red arrow markers. If you’re marked, simply move away from the group.

Incendiary Bombing: Those targeted must take the markers all the way to the edges. It will place a burning AOE that will stay for a portion of time.

Guided Missile: Those targeted should run in the direction that’s away from the party. Engels will consistently blast missiles in their direction.

Energy Barrage: This is tricky. He will put meteor-esque markers on the ground that need to be stood in, but he will unleash a laser blast down the center of the arena, covering a third of them. Get to the side and when the laser ends, have a couple book it to one of the areas in front.

DPS Check: Simply kill everyone and mitigate damage. Watch out for cone attacks from the bigger, Reverse-jointed Goliaths.

Proximity Bomb: Get to the back of the platform, otherwise you will die.

Marx Activation: While Engels will still use his arms, he’ll summon two on the sides of the arena that you’ll  have to monitor’s positioning of as they’ll clamp you.

Area Bombardment: This is all the bombing runs tied together. Incendiary Bombing, Guided Missiles and standard AOES at your feet.

Marx Crush: Get to the front middle. You’re going to need to destroy both Engel’s arms.

And that’s it. He will continue to attack you with all the attacks until you defeat him. 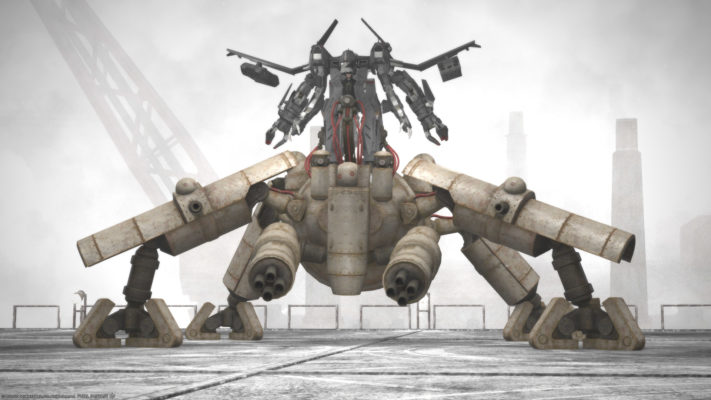 Laser Turret: 9S will turn in a direction and prepare a laser. Get out of his way.

Dual-flank Cannons: Avoid the sides (despite its name). It will add a debuff and hit hard.

Fore-hind Cannons: Avoid the front and back (again, despite its name). It will add a debuff and hit hard.

Engage Marx Support: Two arms will raise up to the platform. Go to a part of the platform they are not. In later parts of the fight, there will be three, only allowing one fourth of the map to be safe.

Undock: When 9S gets out of the mobile unit, he will bombard the area with three straight lines coming from either north, south, east, west. Simply time yourself to move into the already bombarded part of the map as it happens.

Anti-personnel Missile: The arena is a grid and 9S will target specific area. Stand in the safe and avoid the bad, moving between each area as they go off.

Goliath Tanks: Have the tanks aim them away 9S and everyone burn them down. 9S will still attack you with AOE missiles and raid-wide attacks. Healers be prepared to heal through.

Hack Goliath Tank: When the tanks are down, 9S will hack one of the tanks (showing a circle filling above the tank). Run to the other tank and hide behind it. When the tank blows, run away from the tank you took cover behind as that’s going to blow, too.

DPS Check: While 9S is hacking, three Serial-jointed Service Models will appear. Each Alliance pick it up and burn them down. Obviously, mitigate when you’re done.

9S will keep doing pummeling you with all these mechanics tied together (such as the Bombarding and Anti-personnel Missile).

And there you have it, all the fights in The Copied Factory described so you know what you’re getting yourself into. It’s not overly difficult, but there’s a lot of mechanics, especially in the second fight.