It has recently come to our attention that GameStop locations are being dishonest with their supposedly free giveaways. Their trickery has been evident in the past, but now they’re directly contradicting Nintendo’s guidelines. It’s apparently been an on-going problem, at least a few weeks.

Starting on August 13, Pokémon fans should have been able to pick up a free code card from GameStop that could be used to download a Mega Stone for either Pinsir or Heracross. The Pokémon themselves could be downloaded over any wi-fi connection. On two occasions at two separate stores, however, we have run into quite the snag. Employees told us that the code cards are pre-order giveaways for the upcoming Alpha Sapphire and Omega Ruby, which is false. 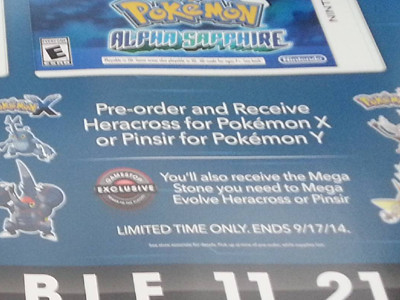 In the incident in the first store, it was the actual manager who told us it was a pre-order exclusive. She said they’ve “only been giving them out as pre-orders,” even after showing her the poster which states “no purchase necessary.” In the second store, the employee said it’s on their website. That’s also false, however, as the official Pokémon website as well as Nintendo both say players have the option of pre-ordering the game.

Nintendo says, “Players who visit participating GameStop stores to pick up the code can also pre-order the Pokémon Omega Ruby and Pokémon Alpha Sapphire video games, releasing November 21, 2014, for the Nintendo 3DS family of systems, and receive a special pre-order bonus poster.” So, the only thing you would be getting from the pre-order is a poster, not the codes. 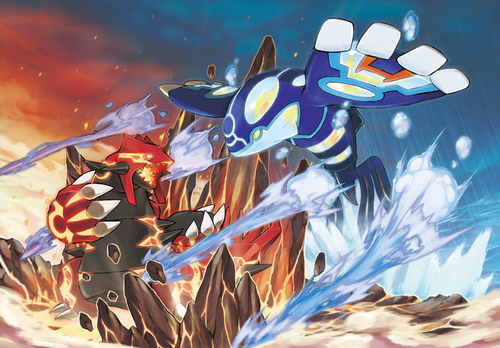 This is the pre-order item for Alpha Sapphire and Omega Ruby.

Pokémon‘s website confirms this by saying, “While at GameStop, you’ll be able to preorder your copy of Pokémon Omega Ruby or Pokémon Alpha Sapphire and receive a special preorder bonus poster (while supplies last)!”

If you visit the Alpha and Omega page on GameStop’s website, though, an image created for the promotion similar to the above flyer below  states in tiny print the card can be “pick[ed] up at time of pre-order.” Underneath the image, however, it says “Visit your local GameStop from August 18th through September 21st and receive a free code for a Mega Stone to Mega Evolve Heracross or Pinsir!” This contradicts the image and is further proof that GameStop is unclear how Nintendo’s promotion is supposed to work. 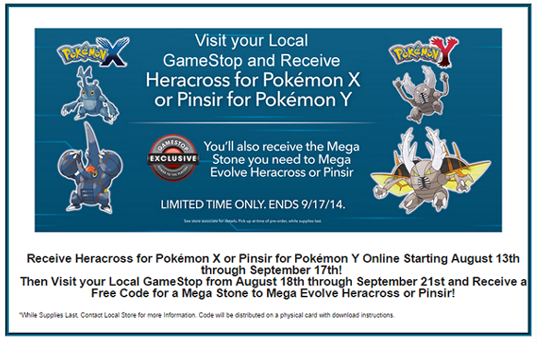 After entering the stores mentioned above, we checked out a third one. This particular location had no problem handing out multiple codes. No mention of pre-ordering and no hassle at all. Does this mean only certain stores are charging customers for free giveaways? Are unscrupulous employees doing it in an attempt to solicit more pre-orders? It wasn’t only us who encountered this problem. There are countless of other fans who’ve posted their problems online.

They all say the codes are free, yet when asking in the store, they want us to pre-order. You shouldn’t be forced to put down five dollars to pre-order a game just to get the free codes. Five dollars does not equal free. Even if this was a pre-order bonus, it’s a terrible one. We hope the next distribution for Diancie and Gengar goes a lot smoother. It’s terrible that some fans have to go through this just to enjoy their games.