One of the quirks of Kickstarter is that the pitch sells you on the idea of something as you’d like it to be.  Yes, that’s basic advertising, but generally people are advertising things that exist, which is a great help in contrasting wishful thinking with reality.  There’s a greater amount of faith in a Kickstarter pitch, and that’s why the best ones (Planetary Annihilation, for example) show plenty of gameplay footage.  Developers talking about the dream of the thing they want to create is certainly nice in generating enthusiasm, but generally it takes a good display of the work that’s been done to make fans part with cold, hard cash.  And then there’s Golem. 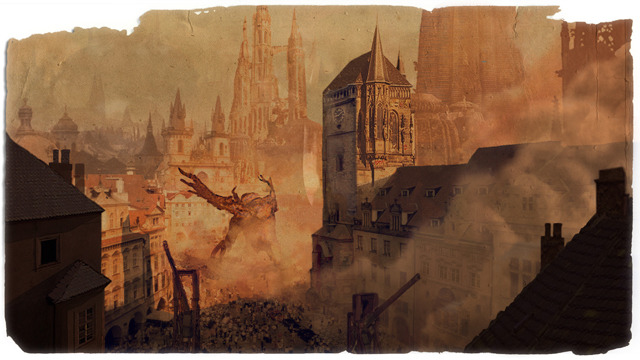 Golem is a going to be a game from Moonbot Studios, which is a game/animation studio best known for winning an Oscar for their short film The Fantastic Flying Books of Mr. Morris Lessmore, available on iTunes and unofficially on the Youtubes.  They’ve also got a Sony Wonderbook game called Diggs Nightcrawler on the way, as well a a couple of iThing titles under their belts, so they’re a legit gaming studio that has produced in the past.  Golem, however, looks to be something a bit bigger and more ambitious than their previous gaming work, and the idea of it is wonderful.

The golem was a Jewish legend about an artificial man created by Rabbi Loewe, designed to protect the Jews from persecution.  The game version of Golem looks to be more Shadow of the Colussus than artificial human, and the challenge of playing is in learning to control its power.  As they say in the pitch, “Playing with a butterfly and battling evil require different uses of the Golem’s power.”  You’ll take on missions to drive the story along, and success or failure will effect what kinds of upgrades are available as Prague’s crafting guilds gain or lose enthusiasm for the golem project.  Personally, at this point I’m basically shoving money into the monitor in hopes that a game will pop out.

From a colder, “show me what you’ve got” standpoint, though, there’s almost nothing to see here yet.  There’s a total of 6 seconds of golem movement shown in the otherwise excellent video, with the other 3:24 showing off concept art and the lovely people of Moonbot Studios being enthusiastic about their game.  It really is a very well put together video, with none of the echoing audio or dull monotone you tend to get from people who are obviously happier when nowhere near the front side of a camera lens.  They’ve got a wonderful idea here and are obviously raring to get down to its development, but at this point there’s no game to speak of.  When the goal is $750,000, that’s an important thing to have.

Golem looks lovely, honestly, and it easily pulled a donation from me.  It’s also got 49 days left on the clock as of this writing, so hopefully like many Kickstarters that have launched like this before (Project Eternity, anyone?) they’ll have plenty to show as the clock counts down.  It’s a little too early to say, but maybe if we’re lucky Golem will be revealed to the the thing we imagine it to be.