If you’ve stumbled across this article, chances are that you’ve hit a wall a few hours into Bloodborne. Don’t fret, simple hunter, you’re certainly not alone here, and that’s why we want to come to your rescue with some tips and tricks to help you get past each of the spiritual Souls successor’s bosses. Granted, if you’re looking for the full From Software experience, you’re probably not going to want to read any guides, as Bloodborne‘s true joy comes from figuring out each of its lessons on your own. There’s nothing more satisfying than struggling on an area for hours, only to have something click that makes everything simpler. Nonetheless, if you’re having trouble with the Cleric Beast, Bloodborne‘s hideous first boss, we’ve got a few strategies you can use to continue on your path through Yharnam.

For the sake of pure transparency, I’m probably the most methodical Bloodborne player around. I like to run through entire areas, or every available area in Yharnam, over and over and over and over again in order to make my character as strong as humanly possible. Now, obviously this is a game that prides itself on grinding, progression, and education, but I like to take this to the extreme. If you find yourself struggling with a boss for hours on end, continue farming Blood Echoes, Blood Gems, Quicksilver Bullets, and Blood Vials for a few hours in order to give yourself the best chance possible. Playing methodically will also give you a number of items that you might otherwise have missed, so consider taking things a bit slower. 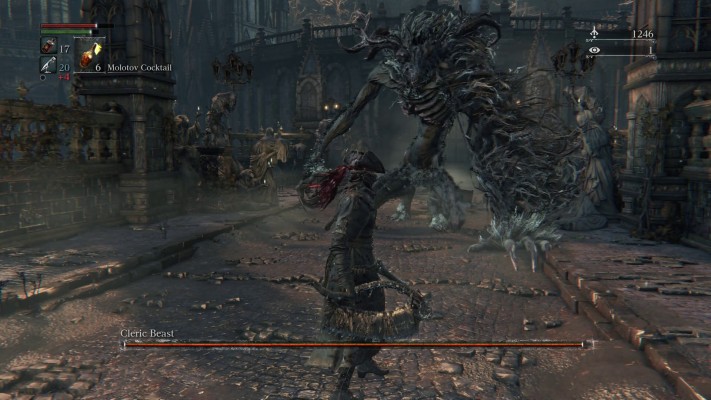 Okay, after that extended preface, it’s finally time to discuss the Cleric Beast. Once you’re able to reach the massive bridge that sports two lycanthropes (which players should easily be able to dispatch before fighting the boss), a single possessed citizen, an Ogre, and a handful of crows, you’re going to want to head under the massive archway in the distance. Having the Yharnam Hunter Outfit, which can be found in a separate section of the sewers that, coincidentally, are accessed via the opposite side of said bridge, should bolster your defense statistics enough to give you a fair shot. Also, it goes without saying that you should have as many blood vials as possible, as ample healing is going to prevent sudden death due to the Cleric Beast’s grab and slam attack.

There are three separate overarching strategies that players can utilize to thwart this disgusting anorexic yeti, though all of them include a fair amount of melee attacks. The name of the game here is getting behind this slow-moving creature, as this will allow you to deal significant damage in between its heavy attacks. If you’re someone who isn’t a huge fan of Bloodborne‘s automated camera movement, you’re going to want to roll either alongside or between the Cleric Beast’s legs, though the latter strategy is more risky, as you could wind up in its grasp sooner rather than later. The second strategy, which also involves back-focused melee attacks, is for people like me who vastly prefer side-stepping to rolling. Simply dash around one side of the Beast’s body in a semicircular manner in order to attack it from behind. The third strategy isn’t so much an separate method, but those with a fair number of Oil Urns and Molotov Cocktails can douse the boss in oil before taking off roughly a fifth of its health with a single Molotov. If you are willing to use items exclusively, more power to you, but a quicker method would be to use one or two rounds of oil burning before focusing on melee attacks. 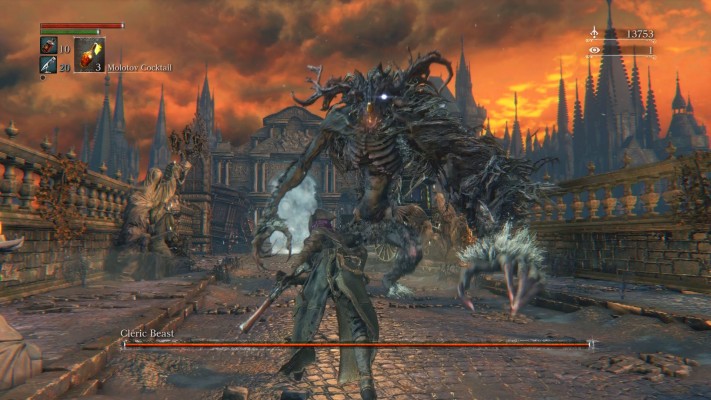 You’re going to want to stick to standard R1 attacks, standard R2 attacks, or charged R2 attacks as opposed to the firearm-aided Visceral Attacks that work so well on ogres and lycanthropes. Sure, it’s totally possible to pull these off when fighting the Cleric Beast, but due to its swift animations and potential for dealing massive damage, the risk is often not worth the reward. When you consider the fact that you could continually dash around it, and thus not have to expend your Blood Vials, risking instant death at the hands of a ground-pound, grab-and-slam, or swipe simply isn’t worth it. To be fair though, if you’re someone who is particularly adept at Visceral Attacks, but struggles with dashing and/or rolling, you might want to stick with what you know best.

Keep all of this in mind and fighting the Cleric Beast should be a simple matter of lather, rinse, repeat. If you’ve been rocking a Saw Cleaver up to this point, and have upgraded it at the Workshop using your Blood Gems, then your quick barrages of R1 attacks should dispatch this boss relatively easy. Once the proceedings are over, collect your blood echoes, light the newly-revealed lamp, and get back to grinding before facing Father Gascoigne.