Look, I know that some of you out there might turn up your noses at the idea of going through and fighting a completely optional boss. Hell, if this was any other game, I’m sure I’d be right there with you; however, this is not just any other game. Bloodborne has become an obsession for thousands, and experiencing every inch of this downright stunning title is all but mandatory at this point. If you were looking to blast through the mandatory content, you’d miss one of the most visually appealing and downright badass bosses, Darkbeast Paarl. In order to encounter this electrically-charged bag of bones, you’re going to have to follow a number of very specific steps; don’t worry, though, it’ll all be worth it.

In order to access Hypogean Gaol, you’re going to have to be killed by a Snatcher (the tall, bag-wielding creatures wearing hoods) at some point after defeating the Blood-starved Beast. It’s worth noting that you won’t be warped into this subsection on Yahar’gul unless the Snatcher that kills you hasn’t transformed into its quicker, frenzied state. A guaranteed way to find Snatchers after defeating the Blood-starved Beast is to jump down the giant well near the entrance to the Abandoned Workshop. Upon entering the Odein Cathedral, you’ll notice that the previously closed door down the stairs and to the right of the respawn point is now open. Follow this path, making sure to avoid the various gun-toting enemies until you get to the exterior of a large, cylindrical tower. Head across the bridge, turn right, and jump down the gap in the path in order to get to the massive wooden well. After jumping down to the bottom and following the path straight ahead, a Snatcher will eventually attack you from the left, so simply let it kill you before the Hypogean Gaol warp cutscene plays. 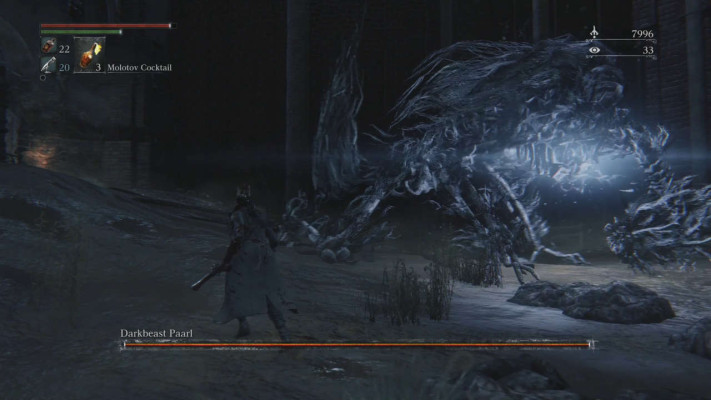 Before attempting to fight Darkbeast Paarl, head upstairs and light the lamp near the cathedral altar, as this will allow you to transport back to this point before nightfall. Darkbeast Paarl resides at the end of a tunnel near the point where you first appeared, so head in that direction assuming that you’ve leveled up a sufficient amount to this point. If you don’t want to miss this battle, ensure that you don’t fight Rom the Vacuous Spider, as Hypogean Gaol becomes completely unavailable after this battle. It also goes without saying that you should have a high number of Blood Vials (and Oil Urns/Molotov Cocktails if you aren’t confident in your melee abilities), as these healing items will give you leeway to be more aggressive. One last thing: Darkbeast Paarl uses electricity extensively, so if you don’t have high defense stats, you’ll want to purchase the Tomb Prospector’s clothing from the Bath Messenger in the Hunter’s Dream.

Assuming you’ve taken the long and winding road to Darkbeast Paarl’s domain, it’s finally time to get down to business. Paarl is one of the most unique bosses in Bloodborne, as his combination of elemental effects, quick swipe attacks, and limbs with individual health statistics makes for a number of unique strategies. The main thing you’re going to want to focus on is getting its electricity to discharge completely. Whenever Darkbeast Paarl isn’t electrically charged, he’ll collapse to the ground, making it incredibly simple to deal massive damage. For the sake of this guide, I’m going to focus on two techniques that make this possible. Obviously, if you’ve gotten to this point, you know that large foes are easily conquered by using rolls and sidesteps to gain momentary access to their sides and back. Because Darkbeast Paarl has a great deal of space between its limbs, you’re going to want to make sure that your rolls and dashes position your character near one of Paarl’s back limbs if you intend on dealing damage this way. 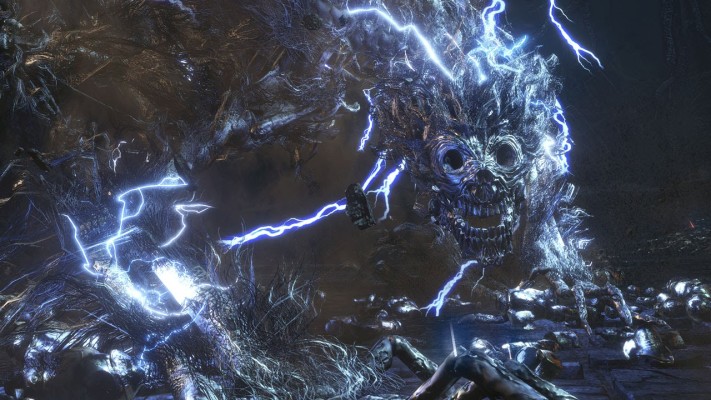 In order to get Darkbeast Paarl to collapse and discharge his energy, you can either bash it in the skull (which leaves you vulnerable for his frontal swipes if you’re not careful) or take out both of its rear limbs with melee attacks. As was mentioned earlier, each limb has its own individual health statistics, though these are never shown on screen. If you’re able to whittle down these hidden health bars and get the boss to collapse, you should be able to take out one-fifth to one-quarter of its health in one fell swoop. The one major concern is that Darkbeast Paarl can unleash a massive field of electric current if you get too close too soon, so whenever you see a giant blue ball of electricity, be sure to get out of there immediately. Through repeatedly removing its electrical pwoer through four or five forced collapses, or by using Oil Urns and Molotov Cocktails, you should be able to take Darkbeast Paarl out in a matter of minutes.

Once you’ve defeated Darkbeast Paarl, you’ll notice that the door at the rear of its domain opens up into the lower section of Old Yharnam (mind=blown). Congratulations! You’re well on your way to completing every optional boss in Bloodborne you completionist, you.