Even though Bloodborne‘s Chalice Dungeons lack the meticulous, hand-crafted feel of Yharnam, there are still quite a few encounters for players to squeeze more gameplay out of. Granted, some of these fights, like the Beast-possessed Soul, feel far simpler and less inspired than a great deal of From Software’s boss battles. Nonetheless, there are much more interesting bosses lurking around after you make it past this rudimentary enemy, so getting stuck here can be a real drag. Thankfully, the Beast-possessed Soul only possesses a handful of moves that are highly telegraphed, making dodges and Visceral Attacks fairly easy to pull off. Here are some basic strategy tips you can use to get past Bloodborne‘s worst boss in order to continue your journey into the depths of the Chalice Dungeons.

The main thing you’re going to want to bear in mind during this fight is the fact that it’s rather easy to get caught in a series of the Best-possessed Soul’s attacks. Other than its fire-based attacks, every move will come in a series of two or more, so your best bet is to use your firearm to parry. Yes, it’s entirely possible to get behind the Beast-possessed Soul during one of these maneuvers, but it’s equally easy to get caught inside the next series of attacks. Luckily for you, these melee attacks have roughly the same wind-up as that of the standard Ogre’s smashes, so getting a well-timed gunshot in is easy as pie. If you’re a high-level Hunter, only a few of these attacks should be required to eliminate the Beast-possessed Soul. 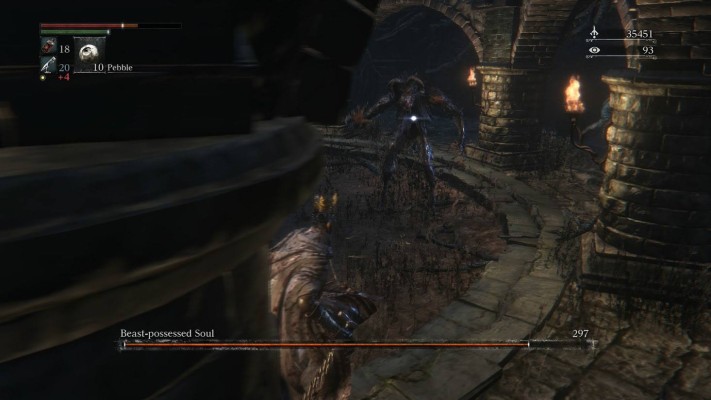 Still, there is a fair chance that you don’t have the high Strength and Vitality statistics necessary to end this battle in a matter of seconds, so knowing what you’re up against will certainly help. The Beast-possessed Soul has two non-melee attacks that you should look out for: an arching flame attack and a fireball launching move. Both of these attacks are extremely easy to dodge by either rolling or locking on and side-stepping, so it shouldn’t be that difficult to avoid damage if you’re patient. Dodging around to the Soul’s back during one of these attacks will give you enough time to do heavy damage before the next round of melee attacks. By combining this dodging strategy and melee-interrupting Visceral Attacks, this dull battle should end rather quickly, enabling you to continue onto one of the most exciting Chalice Dungeon bosses (presuming you’re in the Central Pthumerian Labyrinth): the Keeper of the Old Lords.