It seems as though Bloodborne‘s battles get more and more innovative as the campaign moves forward. If, at any point, you’ve found yourself thinking that a single boss is too easy, the Shadows of Yharnam will satisfy every one of your masochistic needs. Bloodborne is the angriest, fastest From Software game to date, and nowhere is this more evident than at the end of the Forbidden Woods, when you’re fighting these three bosses all at once. Being that the Shadows of Yharnam become progressively more powerful over a relatively short amount of time, you’re going to want to ensure that you are as aggressive as humanly possible, as this is the only way to not get overwhelmed by the most unique boss(es) to this point.

Before diving into the intricacies of this fight, let’s go over the best way to set yourself up for success. Like with every other boss battle, you’re going to want to have as many Blood Vials as possible, as there’s a very high chance that you’re going to take some damage here. For this particular strategy, having a full stock of Quicksilver Bullets is imperative as well, since the Shadow of Yharnam are extremely susceptible to Visceral Attacks. Leveling up a fair amount and having a powerful elemental weapon will put the odds decidedly in your favor; personally, I went into this fight at Level 74 with a +6 Tonitrus. Of course, you don’t have to fire your weapon at all to be successful here, but constant side-stepping is going to extend the battle into extremely difficult territory. Basically, the name of the game here is to eliminate all three Shadows as quickly as possible, as this will prevent them from unleashing too many extreme attacks. 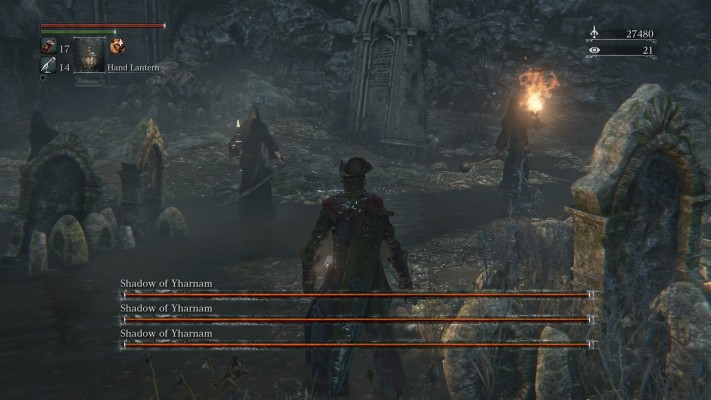 Each of the three Shadows of Yharnam have a different set of characteristics that affects how they attack you. Shadow 1, the most aggressive of the three, wields a two-handed trick katana, which it uses to constantly charge into your immediate area. Shadow 2 carries a flame-throwing candle device and a scimitar; this particular individual is going to give you some problems if you get too close for too long, as it has the ability to both melee you and unleash a torrent of flames in a semicircular pattern. Finally, Shadow 3 prefers to hang back and fire three fireballs at you every couple of seconds. In theory, taking the Shadows out in reverse order (3-2-1) will allow you to mitigate a great deal of damage, being that the fireballs have light tracking; however, the quickest method is actually to go in the opposite order. As I mentioned above, Visceral Attacks are going to be your best friend here, so taking out each enemy in order of their aggressiveness will allow you to unleash as many of these moves as possible. Essentially, whenever a Shadow attempts to attack you, initiate a Visceral Attack and watch as their health bar is ravaged. Of course, this battle is anything from straight forward, so while the overarching strategy should be to do as many Visceral Attacks as possible, there are a few things you should know about this three-stage fight.

The second stage of the fight begins once one enemy has roughly one-third to one-quarter of its health. Each of the Shadows will morph in some fashion, causing their attacks and abilities to get stronger. Shadow 1 will gain a leap attack, Shadow 2 will light its scimitar on fire, and Shadow 3’s fireballs will track you a bit more than before. The way to tell whether or not a Shadow has evolved is quite simple: snakes will star to emerge from its face. Your strategy shouldn’t really change once the battle has moved forward; the name of the game will always be quick attacks, careful dodges, and a high number of Visceral Attacks. Once two Shadows have died, the remaining foe gains the ability to summon massive, largely unavoidable snakes out of the ground. If you’ve been landing your Visceral Attacks and fighting aggressively, it’s entirely possible to defeat the Shadows of Yharnam before a single snake emerges. The easiest way to avoid these attacks is either to whittle down each Shadow’s health equally, or to kill them one at a time with reckless abandon. 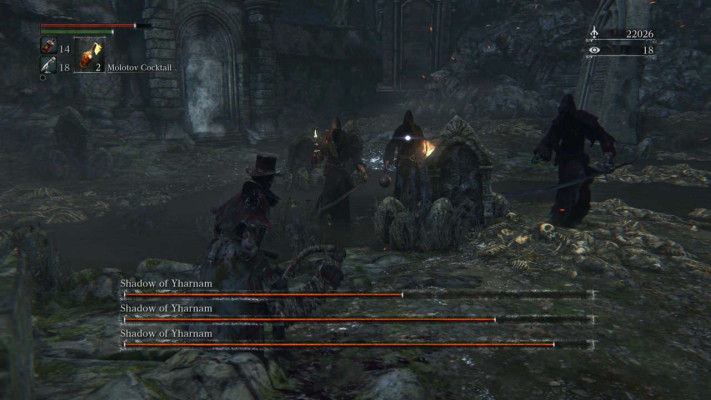 Your aggressive play will be rewarded with the wonderful victory message, a new lamp and entry into the next section of the world: Byrgenwerth.