Up until this point, Bloodborne‘s boss battles have been fairly straightforward. Sure, individual variances like Father Gascoigne‘s second transformation, the Blood-starved Beast‘s poison attacks and Vicar Amelia‘s healing ability have made things a bit more difficult, but the same basic strategies could be used in every fight up to this point. Instead of dodging and slashing like in the previous four boss encounters, however, the fight against the Witches of Hemwick tests your mind far more than your gameplay abilities. You’re going to need to be able to prioritize every move you make, as one wrong decision could leave you with a completely insurmountable task. Fear not though, as this handy guide will provide you with everything you’ll need to know in order to quickly dispatch these barnacle-ravaged old witches.

After reaching the end of Hemwick Charnel Lane, hopefully after a moderate amount of grinding and item accumulation, you’ll enter a massive, run-down building guarded by a couple of possessed citizens. Head down into the Witch’s Abode and prepare to have your mind sufficiently flipped. Initially, the first Witch, whom I’ll refer to as the Red Witch, will spawn a long-haired demon out of a pool of red ooze. This action provides perhaps the greatest moment of confusion and realization in Bloodborne to this point, as those who are attempting this battle for the first time will likely believe this creature to be the Witch herself. After killing this relatively simple foe, take notice of the fact that the true boss’s health bar hasn’t moved an inch. That’s right, these creatures can be thought of as attacks rather than enemies, as the Red Witch will continuously spawn them until she is either attacked sufficiently or killed entirely. 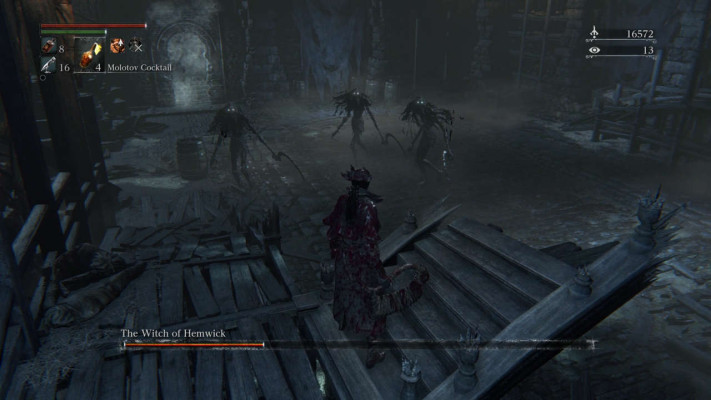 Having a pair of dedicated surround sound headphones will save you a great bit of time, as both Witches’ footsteps can be heard frequently. If you don’t have a surround sound setup, don’t worry, as a circular red flash of light will give away the invisible Witches’ positions. The key to defeating these barnacle-covered hunchbacks is to never leave more than two or three of the lanky, long-haired creatures alive at any point. Individually, or in pairs, these beasts are easily manageable, but when five or six of them appear, you’ll have little-to-no time to interrupt the Witches’ summons. Using the red light and the sound of the Red Witch’s footsteps, locate her and unleash as many melee attacks as possible before she warps away. Repeat this process over and over, making sure to take care of the summoned creatures every once in a while to make things simpler.

Once you defeat the Red Witch, her comrade, the Blue Witch, will appear. Instead of creating creatures intent on killing you, she has the ability to freeze you in a single spot before coming to slit your throat. Add this to the presence of the newly-revived Red Witch (who only has about one-fifth of her health remaining), and it’s easy to see where this fight starts to get complicated. There are two ways to go about defeating these two bosses, one of which is significantly simpler than the other. Being that you were able to defeat the Red Witch when she was alone, you should attempt to focus your attention on the Blue Witch using the same tracking strategy outlined above. Granted, it can often be difficult to discern which Witch is which (yes, I did that on purpose), so if you’re able to track one of them down, take the opportunity to deal some damage before running off to tackle some of the summoned beasts. There are moments in which you can figure out who’s who, though. Whenever you see one of the Witches of Hemwick surrounded by a pool of colorful, bubbling liquid, run and roll over to her as soon as possible and attack her before her sorcery ritual is complete. 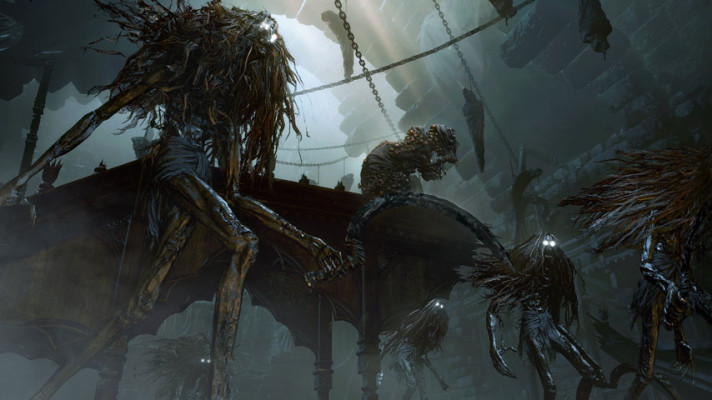 As soon as the Blue Witch’s health is below 66%, you’re likely going to be able to ignore the summoned creatures completely if you move fast enough. Your number one priority should always be to deal damage to the summoners, as their abilities are far more deadly than the presence of these lower-level spawn. In theory, once the Witches’ health bars are low enough, you should be able to either take out the Red Witch and stop the beasts from spawning completely, or defeat the Blue Witch and prevent yourself from being frozen in place. Once one of these foes is hacked to death, killing the other is simply a matter of location. Kill both of the Witches of Hemwick and you’ll be treated to the glorious “Prey Slaughtered” message, a new lamp and a passage into a secret treasure room.

Five bosses down, eh? Not too shabby, Hunter.