We’re really in the thick of it now, ladies and gentlemen. Being that you’ve presumably defeated Cleric Beast, Father Gascoigne and the Blood-starved Beast (if not, you’ve likely spoiled the fourth boss for yourself…oh well), you’re officially in the meat of Bloodborne‘s campaign. The progression path after the Blood-starved Beast is extremely obtuse, but once you backtrack to the Cathedral area metroidvania-style, everything instantly becomes clear. Of course, you’re reading the fourth boss guide at this point, so you already knew that right?

After a downright disturbing religion-inspired cutscene featuring Vicar Amelia’s transformation from religious citizen to a massive wolf-like creature, players are going to be treated to the most exciting fight to this point. In terms of required items, you’re going to want to make sure you have full, or near-full, Blood Vials, as Amelia’s quick attacks often render dashing extremely difficult. Repeated healing is going to be your best friend here. Also, if you’ve recovered or purchased any Fire or Bolt Paper, ensure that you have those ready to go in your Quick Equip slots. In terms of weaponry, fast, high-damage weapons like the Kirk Hammer’s sword and the Saw Cleaver are going to be your best friend here. When your foe has a fairly lethal combination of strength and speed, it’s imperative to do as much damage as possible in a short amount of time.

With the exception of one major twist, which I’ll get to in just a bit, defeating Vicar Amelia requires a similar strategy to the Cleric Beast. In essence, by either rolling or using locked-on quick-steps, you’re going to be able to swing around to her back, providing enough time for a handful of quick R1 attacks. The two major attacks you’re going to want to look out for are her circular swipe, which can quickly corner you in the narrow Great Cathedral, and a move we’ll refer to as the Prayer Slam. The latter attack has the potential to completely knock you out of the fight, as it can take your health down to the point where a quick swipe of Amelia’s claws will instantly kill you. Though this sounds horrifying, the good news is that the Prayer Slam is highly telegraphed; Vicar Amelia will raise her hands into a fingers-crossed prayer position for a couple of seconds before slamming the ground in front of her. If you’re within three or four feet of this attack, her hands will come down right on top of you, dealing a devastating amount of damage. This attack also unleashes a line of damaging smoke straight ahead of her impact point, so the best course of action here is to get out of her way when her hands are raised before dashing backwards after the attack hits. Vicar Amelia will occasionally rest after unleashing an attack, so use these opportunities to do some damage to her sides and back.

The big twist with this fight is that Amelia has the potential to heal herself, which she’ll attempt to do if you’re too far away. The second a golden aura surrounds this boss, you’re going to want to dive right in there and land as many melee attacks as humanly possible. Not only is this the only way to stop her battle-breaking healing process, but her stationary position will make her an easy target. If you’ve been doing a fair amount of damage up until this point, one or two of these prayer interruptions will put the odds clearly in the player’s favor. Assuming all has gone well up to this point, play it safe, attack Amelia from behind like before, and revel in your victory. 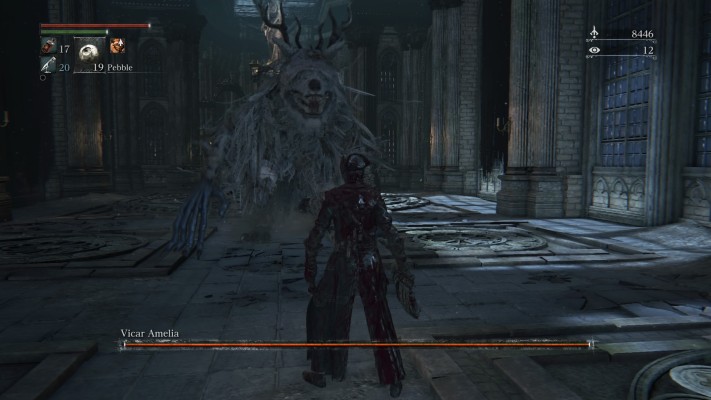 Defeating Vicar Amelia will grant you the Gold Pendant, which can be used to obtain a Gold Blood Gem. Fortifying a weapon with this gem will grant a 12.7% damage increase against beasts, which can be extremely useful in the battles to come. After grabbing the Gold Pendant, be sure to interact with the glowing skull on the Grand Cathedral’s altar to initiate the strangest, most obtuse cutscene in Bloodborne to date.