Whenever you look up a guide on the Internet, the assumption that you’re stuck on a particular section or fight has to be made. Sure, you might simply be studying a game for purely academic purposes, but if you have figured out how to do something on your own, there’s little to no need to get someone else’s advice. Why am I bringing this up in this particular Boss Guide? The answer is quite simple: the method in which I defeated the Blood-starved Beast is by far the cheesiest, easiest and quickest way to beat arguably the easiest boss in Bloodborne. Cheesing in a Souls game is nothing new, whether it’s pushing an enemy off of a cliff (the easiest way to beat the turret-operating Hunter in Old Yharnam) or figuring out some other exploitative strategy, if it’s present, it’s fair game. To be perfectly fair, my strategy for beating the Blood-starved Beast doesn’t involve any exploits, though some might consider stockpiling effect items in order to make a right last under ninety seconds somewhat cheap. Still, if you’re stuck in Old Yharnam, this is by far the simplest way to get your first Chalice.

As was stated above, the Blood-starved Beast is likely Bloodborne‘s simplest boss. The one caveat to this its poisoning abilities, which can kill a Hunter without Antidotes and Blood Vials extremely quickly. Of course, From Software’s greatest development trait might be its ability to teach players valuable lessons through gameplay; if you’ve been running through Old Yharnam repeatedly, you’ve likely been able to stockpile a great deal of antidotes. If not, don’t fret, as you should be able to purchase them relatively cheaply from the Bath Messenger in the Hunter’s Dream. For this particular strategy, you’re going to want to have a few Oil Urns (this is completely optional but highly effective if you’re stuck), a fair amount of Quicksilver Bullets, and some Fire Paper. The latter will be given to you as a gift by the religious Hunter located right outside of the top floor of the cathedral housing the secret staircase to Old Yharnam. It’s worth noting that you should have all of these items in your Quick Equip slots before going anywhere near the flaming-crucifix-surrounded home of this boss fight, as entering your inventory mid-battle will lead to certain doom. Once you have an ample amount of items, it’s time to dive right in and send this disgusting creature back to whatever hole it crawled out of. 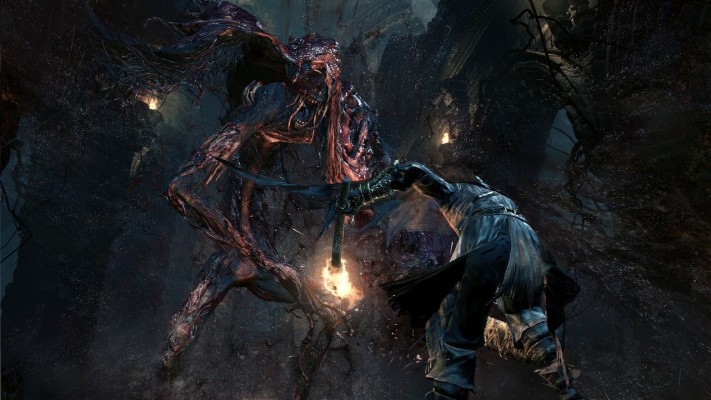 What makes the Blood-starved Beast especially simple is its combination of highly telegraphed attack animations and its apparent weakness to fire. From moment one, you’re going to want to lock on as soon as possible before throwing one of your Oil Urns in the boss’s direction. If you’ve made it to this point in Bloodborne, you likely understand how much damage fire can do to an oil-soaked foe; being able to take out a massive chunk of its health right away is going to prove to be an incredible advantage. After throwing the Oil Urn, light your weapon on fire with the Fire Paper you collected before, and attempt to sidestep your way around the Blood-starved Beast’s attacks. After you’ve set your weapon ablaze, be sure to switch your square button item to your Antidotes, as a great deal of enemy attacks will leave you struggling to maintain your health. Just like with the Cleric Beast, you’re going to want to land a few attacks after each side-step to get the Blood-starved Beast’s health down as much as possible. If you’ve followed these instructions up to this point, you should be looking at a boss with roughly a quarter to a third of its health remaining.

Now we’ve arrived at the fun part, so be ready to get your Visceral Attack on and admire some insane animations. Because of the Blood-starved Beast’s highly telegraphed attacks, it’s relatively simple to land a devastating Visceral Attack. If you’ve made it to this point without utilizing this incredible technique, bravo, but it’s time to learn this valuable lesson sooner rather than later. If you’ve played previous Souls games, think of your firearm as a shield in order to parry and riposte. The best time to land a Visceral Attack in this particular fight is when the Blood-starved Beast initiates its ridiculous forward leap attack, as this move’s animation is long enough to prevent missteps. One or two Visceral Attacks should be enough to end the fight and set you on your path towards completion. 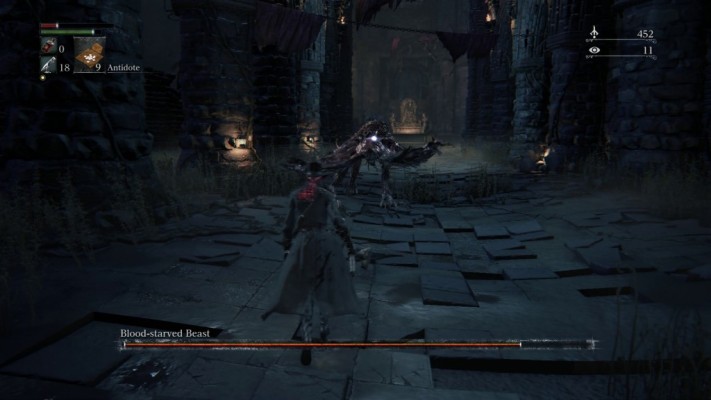 First and foremost, congratulations! Now that you’ve defeated your third boss, head back to Oedin Chapel and enter the previously locked door northeast of the awakening point to continue your journey. Happy hunting!