The amount of independent developers at this year’s Tokyo Game Show hit an all time high, with the entire booth space being completely funded by Sony themselves.  The selection of games was so immense that it was hard to decide what to play first, and sadly I admit I did not get a chance to play everything.  All around there were monitors, smartphones, Xbox Ones, Playstations, a Famicom, and even an exercise machine blooping and beeping in concert.  It kind felt like being a kid in the ’90s visiting a game arcade again.  Banners arched over the play-space showing off the Playstation logo next to the words “<3 Indies”.  Being able to sit down or, rather, stand around and talk to several independent game developers personally while playing their games was truly the most memorable experience of the show.

Here’s some of the best games I played: 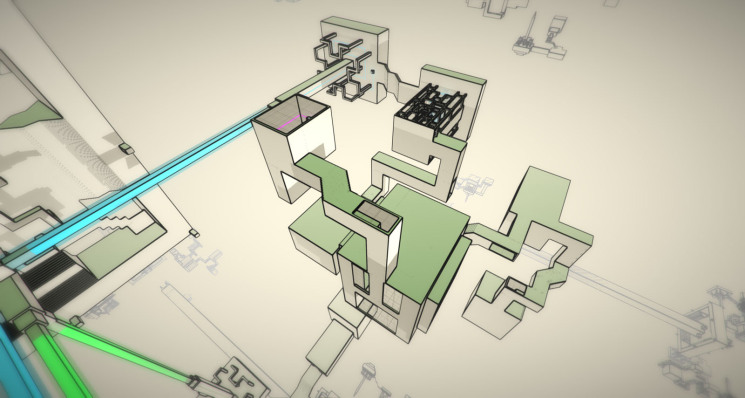 Chicago-born Willy Chyr’s Relativity, nominated by Famitsu for best indie title at the show, looked to be the most popular game on display.  A first-person puzzle game with an innovative physics engine, play-testers were able to manipulate the orientation of gravity to literally walk on any surface, turning floors into walls and walls into ceilings.  Seemingly impossible puzzles that included out of reach switches and blocks were easily conquered after a few moments of experimenting with Relativity‘s physics engine.

Relativity was a Prize Nominee for both Famitsu and Dengekionline

After completing the game’s tutorial, which is set in a generic “testing lab” reminiscent of Portal, Mr. Chyr was eager for us to explore the outer-world map of the game.  Inspired by the work of M.C. Escher, Relativity presents futurist landscape of pastel-colored staircases, pipes, columns, and doorways which can be leaped off  of to enter into endless free-fall, or reoriented into normal platforming segments.  A mysterious and mind-boggling game to say the least, I’m excited to see more.

At first glance,  Super Rude Bear Resurrection looks like a pretty generic 2D platformer.  You can run, jump, slide down walls (ala Mega Man X), and die grisly deaths in spike pits because your timing was slightly off on one of those other thigns. I felt a little bit turned off after losing my first life, until game creator Alex Rose, while shoveling some rice from a bento into his mouth, pointed out that when you die your bear’s corpse remains and can be used as an additional platform.

Using my second life, I progressed back to the point where I died previously and promptly used my first corpse as a stepping-stone to the platform above.   As I continued onward, like something out of a nightmarish monster movie, mountains of dead bears appeared – the remains of players that came before me – and I was able to conveniently use them to leap over obstacles.  While it may sound grotesque, the graphics and interface are cute enough to make it endearing.

The Girl From Gunma KI (群馬県から来た少女・改)

The Girl From Gunma KI , a new age retro-inspired shooter produced by Japanese software company HU-GA (ヒューガ), was quick to draw attention to itself.  The noisy, colorful, explosion of pixels in my face rendered stunned me to the point that I hardly knew what I was doing.  When I turned my head skeptically to company president, Tez Okano, he simply nodded positively and said “Yes, press the button to shoot.”  I gave a thumbs up and continued to blow stuff up with my… magical yellow jelly beans?

The Girl From Gunma KI is a horizontal SHMUP inspired by old Japanese software, specifically shooters for the MSX.  You play as a young school girl who flies through the skies of a Techno-Feudal Japan sort of world.  As a repetitive Japanese battle song loops in the background, giant mosquitoes, bubbles, phallic shaped flowers, and psychedelic butterflies all come to kill you, with your only defense being something that looks like rapid-fire candy.  Only two levels were available and the game still feels unfinished, but it’s a great pleasure to look at.  KI is one of two games being produced by the company, the other being Mythical Soldier HU-GA, which, though I did not get to play it, appeared to be equally noisy, explosively colorful, and face-melting.  As both games are only about halfway through development, they’ve only been announced for Android so far.

I apologize that the screen in the above picture is a bit blurry.  Here’s a video that may be a bit more informative (or more confusing): 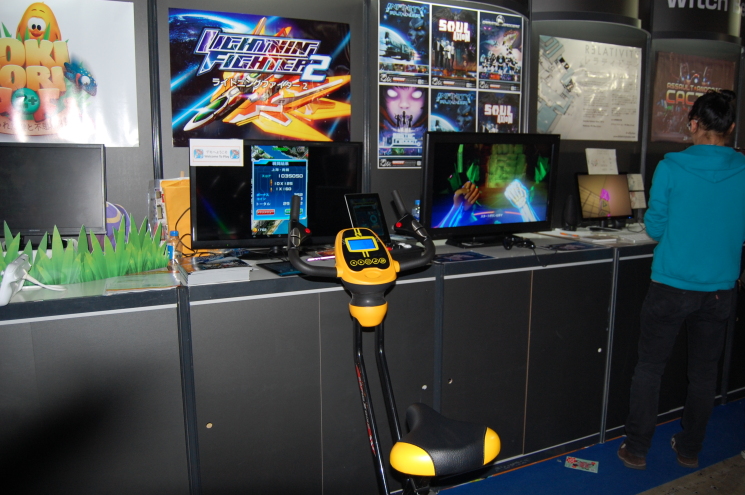 Lightning Fighter 2 is a vertical shooter for iOS and Android created by Taiwanese developer Uwan Studios.  Lightning Fighter 2 offers fairly intense gameplay inspired by bullet-hell shooters from Taito and Cave.  Although the game has already been out on the App store for about a month I had yet to play it, and as a big fan of Dodonpachi and RayStorm I was pretty excited to see it in action.  Upon wandering over to the booth I was a bit perplexed as to why there was an exercise machine present.

The staff greeted me with a smile.  “Hop on!”  I did.  “OK! Now pedal fast!  Use the handles to steer!”  I began pedaling, and immediately an endless amount of bullets were flying toward me.  I frantically tried to steer away with the machine’s stiff handles.  Somehow my tiny ship avoided death, but still there were more enemies coming.  The level progressed and I miraculously made it through without dying.   With my legs exhausted from a day of standing and walking around, could I hold out?

A huge battleship  appeared before me and flooded the screen with projectiles.  My small lasers and bullets seemed to do nothing.  “Don’t slow down! You must pedal faster, sir!  You MUST!” One of the staff members shouted.  I pedaled faster.  “Faster!” Now they all began to shout in synchronization.  “Faster!  YOUR POWER! YOU MUST PEDAL!” My legs went into Sonic the Hedgehog mode, whirring as if some imaginary finish line was floating in front of me.  Suddenly an explosion of lasers shot out from my ship and obliterated the boss.  The staff clapped as I hobbled off the machine.

After catching my breath I stumbled over to a booth for a small company called Miracle Positive Co.  There a woman named Rin Akiniwa introduced me to Airship Q, a sandbox RPG under development for the PS Vita.   Dropped into a room with no exit, I was fairly confused on to do next.  With a bit of trial and error I realized something:  using the main character’s hammer I was able to chip away blocks from the wall and floor, collect them, and then use them again to boost myself up to the doorway above me.  As the game progressed, I was soon able to collect and create other objects and tools, such as wood to build a ladder.  The game makes use of physics, so if you chip away at a wall or a pillar the ceiling above it will collapse

Airship Q immediately struck me as unique, as it combines classic action elements found in traditional 16-bit platforming games with crafting mechanics straight out of Terraria.  Upon talking with Ms. Akiniwa more I found out that Airship Q is actually one of the very first Japanese games to independently produced and crowd funded via the Japanese website Makuake (think Japanese Kickstarter).  Impressively, the game was able to generate half a million yen in donations within 5 hours. Built by a team of former Square Enix employees, including El-Arc producer Taku Kato and Hiroaki Kusano of Final Fantasy Type-0,  Airship Q is a game to watch this winter. 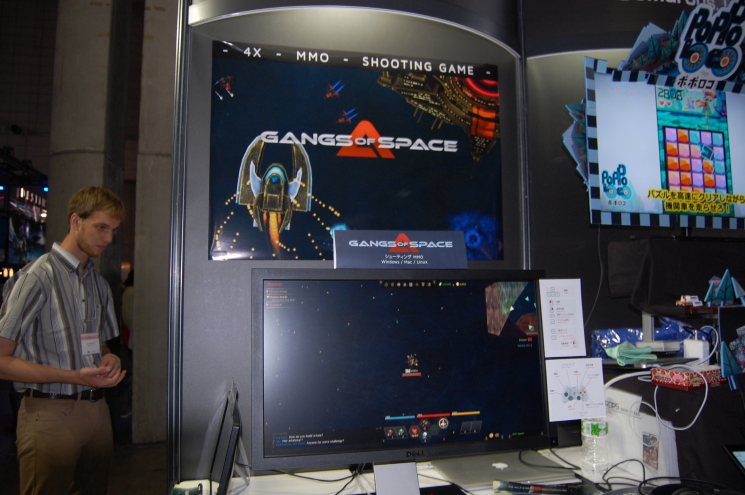 Gangs of Space, a unique MMO-SHMUP developed by Tokyo based programmer Guillemot Matthieu, mixes the best elements of spaceshooters with an open world full of secrets to uncover and other ships to fight.  Kaiju Panic takes a new spin on the “tower defense” genre by mixing it with features from real-time strategy games, asking you to collect minerals and resources to build up a stable line of weapons to combat an alien hoard coming your way.  Canadian developer Sakura River struck a few of my heart strings with Fading Hearts, a Japanese-style dating simulator with a story leaning toward the fatally tragic.

After an agonizing wait, I got a chance to play a home-brewed Famicom (NES) game called Kira Kira Star Night.  The game ran directly off of an America NES system and was very simplistic.  Playing as a small girl, you have to collect stars that fly onto the screen in different patterns.  While it’s a little on the easy side, it has a fantastic soundtrack featuring popular Japanese chiptune artists like YMCK.

That wraps it up for my report on Tokyo Game Show.  See you next year!