Friday, December 12, brought to us the long anticipated grand opening of the brand new Pokemon Center Mega Tokyo.  The store swung its doors open on the second floor of Ikebukuro’s Sunshine City, one of Tokyo’s busiest and hippest shopping centers. 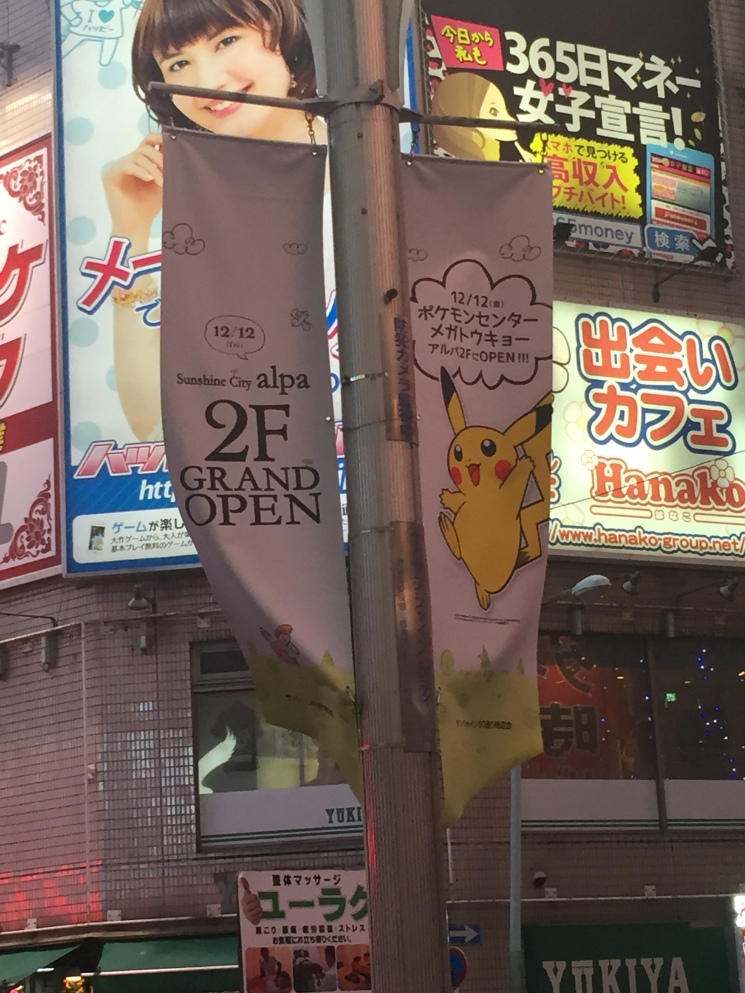 Flags advertising the store are on every corner of the street leading up to Sunshine City.

I am no stranger to waiting in line at events like this.  Due to a fairly busy schedule on Friday, I opted to check out the store on Saturday afternoon.  For whatever reason I felt that because of the store’s size, there wouldn’t be much of a line after opening day.  I was partially correct.  Upon entering the second floor lobby, the coast seemed pretty much clear.  For a Saturday afternoon there didn’t really seem to be so many shoppers.  A helpful sign instructed me to go around the corner to reach store and…BOOM!  I got ready for an hour long wait.

The line eventually overflowed out the door.

Waiting in line for the Pokémon store was an event in itself though.  It was quite interesting to see Tokyo’s rather varied demographic of Pokémon fans.  There was a decent turn out of school children, of course, but among them were also university students, middle aged married couples and even elderly people in wheel chairs.  The time actually went by quickly, since most people brought their 3DS games to pass the time and were eager to play a few battles with me.

As all of us finally got our opportunity to enter the store, we were immediately greeted by the store’s mascots: Mega Charizard and Pikachu!  I dare say that the reason it took so long to enter store was because everyone at the front of the line stopped for a good two minutes to take pictures of this statue and/or pose with it.

Things didn’t stop here for Pikachu and Charizard.  To celebrate the grand opening, the new Pokémon Center had a whole line of merchandise for the two new mascots such as the Mega Tokyo Pikachu doll, sporting a Mega Charizard mantle which flew off the shelves at quite an alarming rate.  Handbags, pins, hankerchiefs, keychains and more involving the two characters could be found for sale surrounding the large the monument.

Pressing forward, much of the store had quite a plethora of Pokémon plush dolls.  There were quite a few Mega Evolution Pokémon dolls, going with the theme of the store.  I found the limited edition Pokémon XY  “snowman” starters to be especially cute.

While Pokémon plush dolls seemed to serve as the main meat of the sales, the central area of the store had pretty much Pokémon everything.  Whether it was Pokémon themed kitchen utensils, chopsticks, Christmas stockings, or Master Ball colored boxers, there definitely was something for everyone.  Lastly, towards the check out area of the store there is also a big section for the new line of Pokemon cards for Omega Ruby and Alpha Sapphire.

After evading a brief assault by Mega Lucario and Mewtwo, I ducked into the checkout area where I saw two intriguing campaign posters.  From December 12th to January 16th, customers of Mega Tokyo who bring their 3DS and Pokemon games to the store can receive a free shiny Pikachu and shiny Charizard as a mystery gifts by connecting to the store’s local area network.  The gifts alternate every hour so some patient customers and I waited around for a bit so we could get both.

I’ve got a really dirty screen…

My spoils of war included a Mega Charizard and Pikachu handkerchief and one of the poncho-clad Pikachu dolls.  Included with every purchase was a flyer for next year’s Pokemon the Movie XY 2015 along with a “Mega Tokyo Pikachu” tradable card.  I found the shopping bag to be pretty nifty too.

Sadly, the opening of Mega Tokyo has also led to the closure of Tokyo’s original Pokémon Center located in Hamamatsucho.  On the other hand, the new store offers a much more convenient and bigger location for Pokémon trainers to congregate.  I had a real blast and made some new friends via the surplus of streetpasses overflowing my game’s menu.

In any case, if you plan on visiting, Mega Tokyo is quite easy to find and is most definitely worth checking out even if you aren’t a Pokémon master yet.  Hope you enjoyed the report!  じゃ〜 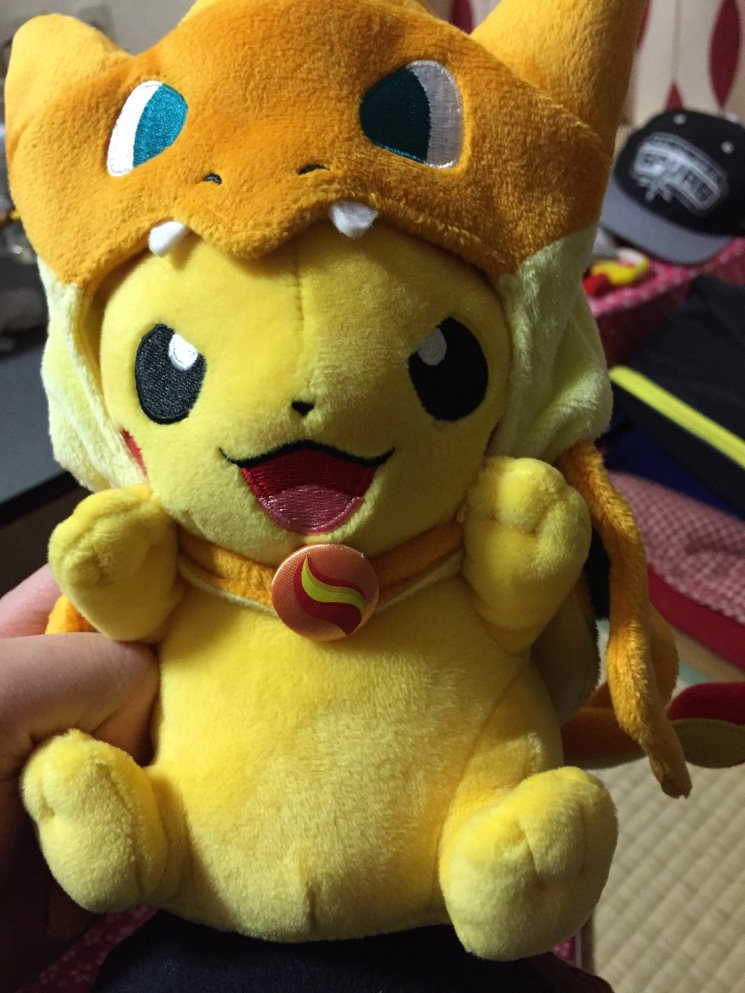