There is a game lost in the mists of arcade history, spoken of only in rumors and conspiracy. Polybius was supposed to be a game released in limited numbers at a series of test locations in Portland Oregon, and those who got to play it were both heavily addicted and experiencing amnesia and heavy nightmares. The game disappeared without a trace and was never seen again, except in the background of The Simpsons. Polybius is gone but the memory of what it might have been stalks the collective gaming unconscious, a warning of the power and danger hidden in the 8-bit sprites and vector graphics of the early arcade scene. Obviously, it’s well past time for a revival, and there’s no better company to do it than Llamasoft.

It’s a little hard to know what to make of Polybius from the video below, but there’s no question it’s fast and colorful. The game will be on display and playable at Play Expo in Manchester, England starting tomorrow, October 8, but for now the little snippet of gameplay below is all that’s available. It looks like an inverted tube racer/shooter, where the player hurtles along the outside of a cylinder blasting targets and collecting spheres. As is usual for Llamasoft there’s more than a hint of Eugene Jarvis in there, with at least one sound effect and the scoring bonus font very clearly borrowed from the Vid Kidz arcade classics. There are hopping space invaders, bouncing sheep, an x-wing fighter that appears to be the player ship, color-cycling buildings sticking up from the cylinder, and particles from the polygonal equivalent of pixel shatter everywhere. It’s pure Llamasoft shooting, but now in VR. 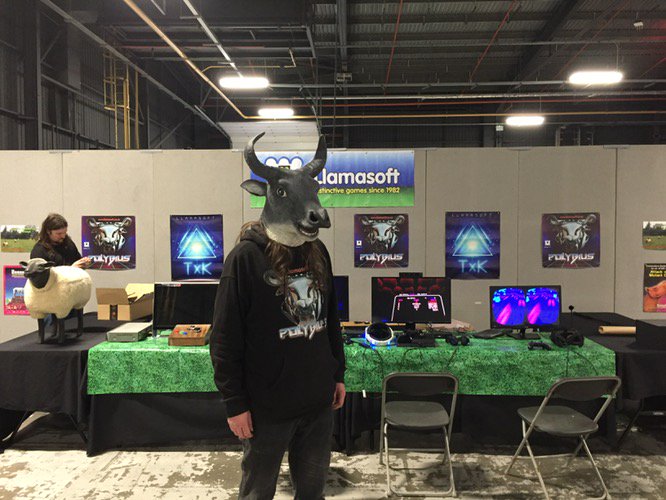 The Llamasoft booth at Play Expo, where you can go hands-on with Polybius.

Polybius is being designed from the ground up for VR, and while you can still play it on a standard screen the full effect won’t be felt without going for a visit in VR. The lead platform is PS VR, where it runs at a pure rock-steady 120 FPS, but there will be a PC version compatible with Rift/Vive or non-VR as well. Jeff “Yak” Minter describes one of the goals of the game to be that of feeling “the speed rush, the relaxation, the euphoria” while avoiding the nightmare effects of mysterious original.

It’s also hard not to view Polybius in relation to TxK, which was prevented from spreading to other systems beyond the Vita by a litigious rights-holding company wearing the rotting skin of Atari. While TxK may have been a thematic sequel to Tempest 2000, Polybius is an all-new game based on a title that never existed but might have, if only the world was just a bit weirder. The new game is a call-back to classic gaming in the way Llamasoft loves while also remaining a unique property, and if anyone wants to come knocking with a cease & desist they’ll most likely be delivering it via unmarked black helicopter.