Shovel Knight came to life thanks to Kickstarter, and his future couldn’t be much brighter than it appears right now. With the game finally out on Steam, the Wii U, and 3DS for $15 as well as regular and arranged OST selling on a pay-what-you-want model, retro gamers are getting amazing value out of this indie darling. Pixel art has become almost a cliche in 2014, so seeing a game actually live up to NES classics (and in many ways surpass them) is a pleasant surprise. After playing Shovel Knight, the most exciting thought in my mind is what the future held for it. Here you’ve got a game that seems entrenched in the past, but also embraces modern-day design in its breadth and variety of content.

It’s a top-shelf game, so it’s a shame to see it on so few shelves. Steam is a natural first-choice for digital distribution, but exclusivity to the 3DS and Wii U’s eShops is puzzling. Both Xbox 360 and Xbox One, as well as the PS3, PS4, and Vita marketplaces would be fine choices for future releases. With the game’s success all but guaranteed by positive word of mouth, we hope to see it released on every major platform – but other interesting possibilities exist as well. While mobile devices aren’t ideal for platformers, Shovel Knight is good enough to stand out and command a high price. The checkpoint system makes it very mobile-friendly, but a quick save option would be even better. 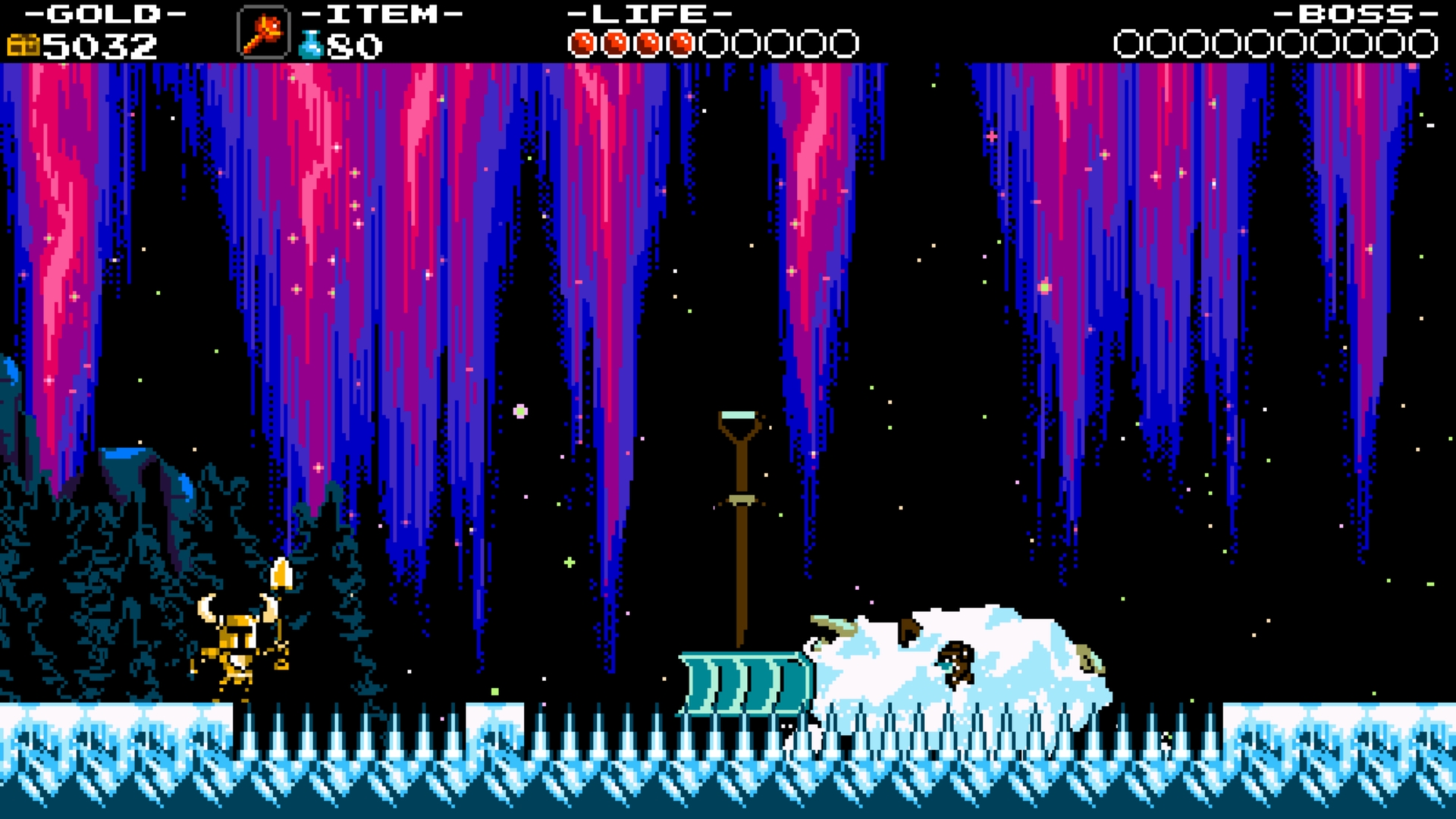 Shovel Knight‘s NES aspirations could only truly be realized by playing it on the NES itself, but it’s doubtful we’ll see a demake any time soon. Still, it’s fun to speculate. While the full game couldn’t be run on an NES, it would be really interesting to see how much could be retained on a true 8-bit processor. In theory, all you’d really need to do is shrink the giant fish/apple hybrid that helps you out, compress the game to a 4:3 aspect ratio, and downgrade the music to work with the NES sound chip as opposed to the famicom. The music issue could also be resolved in a physical cart by adding an expansion chip to enable more sound channels (Sunsoft did this with games like BatmanL Return of the Joker). Playing the game brings me back to the days of my youth (like the scent of fresh lemon, you see), when my friends and I would spend hours on end playing the few games we could get our hands on. Shovel Knight is reminiscent of Mr. Gimmick with its combination of perfect controls, sharp graphics, and hummable tunes. It’s a fun, challenging experience that was clearly made with a lot of care.

The most exciting thing about an NES version is imagining how they’d handle the cover art. would they go with a black label-style box and have Shovel Knight in mid-jump with ACTION/ADVENTURE in bright yellow text on the lower-left? That would evoke the early NES games, but this has a more grandiose plot. The story evokes similar themes to Castlevania, so imagine a realistically-drawn Shovel Knight in place of Simon staring at the castle in the background. A silly Mega Man-style cover would make sense given the action-heavy gameplay, as would a purple border/red logo Capcom-style cart. Given how closely this evokes Duck Tales at times, seems like the most fitting style to use. While the easiest thing to imagine is a reference to the past, it would be best for Shovel Knight to carve its own path. Games like StarTropics felt like products of their time without relying on the traditional layouts NES players were accustomed to. Of course, folks like me who are nostalgic for these old covers only remember the best parts – kind of like how a decade in music is represented by only a few select hits in movies. 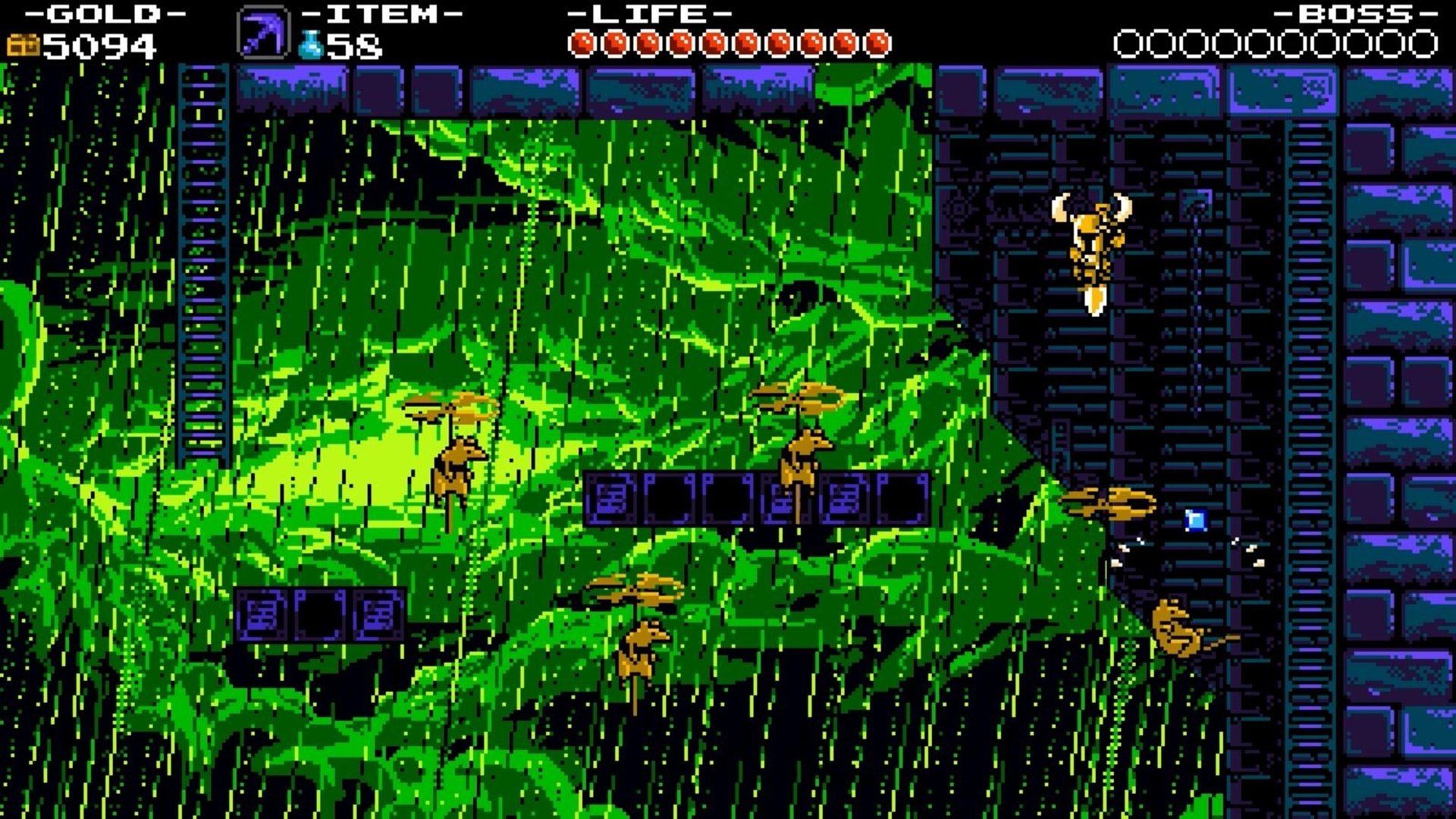 The most obvious direction Yacht club could go would be to make a sequel and tweak the gameplay. Significant changes could be made to the game by letting you use your pogo move over spikes (like in Duck Tales) instead of  just using it on enemies. That would nerf the difficulty a bit, so the devs could add a small consequence to it — like taking away one coin per use to encourage efficient hopping. They could also challenge players with harder alternate routes that focus on pure platforming. More themed knights would be fun as well. You could have Duck Knight, Mega Knight, Bionic Cavalier, The Super Knight Bros, or any number of ’80s gaming icons decked in plate mail. That might be a bit gimmicky, but it would be fun to see Shovel Knight conquer armor-clad versions of childhood favorites. The core pacing of the game between levels and towns is damn near perfect, but having a few more surprise boss battles like the one early on with Mr. Hat would be welcome.

Shovel Knight is proof that what’s old can sometimes be new again. We’ve seen countless “retro” games that are clunky and no fun to play – exactly like what we had back in the day. Shovel Knight takes everything that made the NES era great, but bumps things up to a TG-16 level of action at times and pays tribute to the ’80s and ’90s in the best way possible. You can show this game to a kid now and they’ll be hooked — to me, that’s the best way to show that the game lives up to the best parts of the so-called glory days. It’s addictive and challenging, but fair — something many old games weren’t.