Being a grown man with the occasional laziness-beard makes it hard to game on the go. I’m not saying that it’s embarrassing, but pulling out a bright yellow Pikachu 3DS wouldn’t be very professional at the various grownup establishments I frequent. Thankfully, there are plenty of mobile games I can indulge in while standing in line at the local shelter, or “donating” some blood for cookies and juice. The only real problem is making the choice. After all, those 99 Cents were hard-earned, and gambling with games can be dangerous when the stakes are high. Fortunately for you cheapskates: I, the self-proclaimed mobile game guru of the gaming-sphere, will help you spend your “riches” wisely. In this weekly column, I will showcase outstanding mobile games in short, easy-to-read gatherings of words. You’re welcome.

Developed and brought to us by Beavl, a company that placed a “Tell Us” link in their game, and actually replied to my suggestion for a power-up by personally thanking me for my support, as well as informing me that they’ll be working on a similar implementation. In other words, the best kind of developers. 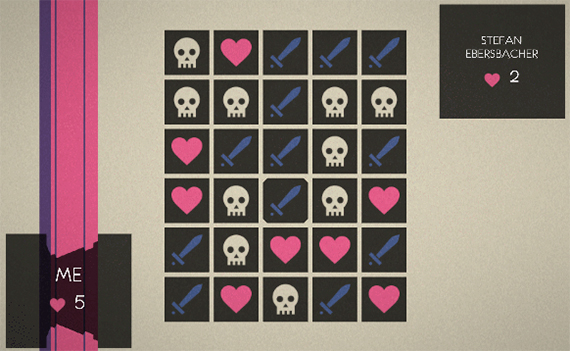 Don’t let the name fool you, even though I have no clue what the hell it means. What I do know is that Faif has been my first experience with the whole early-access thing on Android, and a good one it has been. It’s not that the game is in any sort of alpha or beta stage, it’s just that the updates are more frequent (weekly) and contain additional content that doesn’t really change the core mechanics. Unlike the Steam deal, Faif’s version of early access really infused my gamer-soul with faith in the system. You see, the foundation provided isn’t some choppy mess. Actually, it’s the complete opposite. There’s enough content to justify the investment; the promise of more is simply bananas in your oatmeal.

What is Faif, and why do I want it?

Faif is a lot like Dungeon Raid, in that it also has a board on which you select tiles. Otherwise, it’s nothing like Dungeon Raid at all, because the choices you make when selecting those skull, heart, gem or sword icons are essentially a gamble. Strange, huh? Yep, your choices only allow the engine its random pick of the five tiles your finger brushed against. Sure, on paper Faif is your basic, turn-based RPG with a run-of-the-mill puzzle mechanism tacked on, but while that’s technically true, the ordinary formula has been coupled with an addicting game of chance that truly intensifies the encounters.

While much of the battle-system relies on luck, you shouldn’t go chopping off any rabbit’s feet just yet. There’s plenty of strategy involved in deciding what, when, and where to select your tiles, as well as which power-ups to invest in first, and whether to hoard HP or face the odds and risk attacking too quickly. It’s not a complex system by any means, but it doesn’t have to be. I mean, slot-machines aren’t particularly difficult to manage, and yet thousands of old ladies lose their life savings in Vegas each month, one nickel at a time. I’m not kidding, I’ve seen it happen. 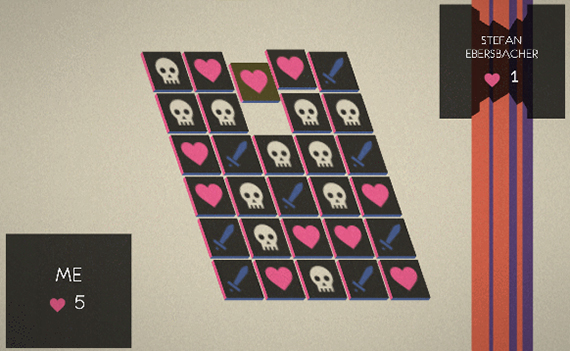 Okay, I want it. What am I getting?

Currently, the game is more or less an endless cycle of tiles and defeat. You face an opponent, and either win, which then advances you to the next tier — and slightly greater enemy — or lose, which sends you to the bottom of the pyramid, stripped of your powers and gems. There’s definitely a shortage of content in terms of game modes, but that’s only because a game based so strongly on chance can sometimes tip the scales too staunchly and make things easier than they’d be had their been some sort of a buffer-boss-battle every few levels.

Luckily, there will be! And pretty soon, too, according to the folks at Beavl; along with plenty of other neat stuff, as well. Those programming beauts have been churning out updates quite frequently, so you shouldn’t let Faif’s lack of completion scare you away, either. This game is ready to be played, and what’s available is excellently crafted, beautifully polished and a lot of fun. The fact that it will only improve in the coming weeks is all the more reason to support it — especially while it’s 50% off during its early access sale. If you’re in the market for a puzzle/RPG/time-killer hybrid app that doesn’t suck, Faif is your game.

You’ve just been schooled by the Mobile Patrol. For more great mobile game related news, features and reviews, check back on a weekly basis. There just might be some. Maybe. Sometimes. When there’s nothing more exciting to write about. You’re welcome.